North Shore residents are up in arms about the placement of new T3 cameras on Onewa Rd which they say present a safety hazard for pedestrians.

Concerns have been raised about the poles for the cameras, which some locals say will block the path, and their installation has been described as "incompetent" by a local politician - but Auckland Transport says that the installation is not yet complete and will include added safety features.

Photos shared online of the recently-installed cameras show them sitting in the middle of the footpath that runs alongside the busy road, which is home to schools, churches and childcare facilities.

The road, which is the main access to the Harbour Bridge for residents of Northcote, Birkenhead and surrounding suburbs, has long been plagued by slow commuter traffic.

A transit lane in some form has been operational on Onewa Rd since 1982 but was first strictly enforced in 2002, limiting one lane to public transport and high-occupancy vehicles.

Since then, it has become a strict T3 lane in both directions during peak commuter times.

Until now, enforcement required Auckland Transport staff standing on the roadside in all weather to catch those breaking the rules.

Earlier this year, it was announced that the rules would be policed by the installation of 68 new cameras spread across 17 "transit zones" on the road.

At the time, Kaipātiki Local Board Chairman John Gillon said enforcement was needed but he was "shocked at the size of the hammer they are using to crack this nut".

He said that residents of Onewa Rd who had a genuine need to move in and out of the T3 lane would be negatively impacted by the camera network, citing the case of an elderly resident who was already apprehensive about leaving her home after being ticketed for being in the transit lane after pulling out of her driveway.

The cameras are now in place and it's not the enforcement of the traffic rules that have locals calling for Auckland Transport to have a radical rethink. 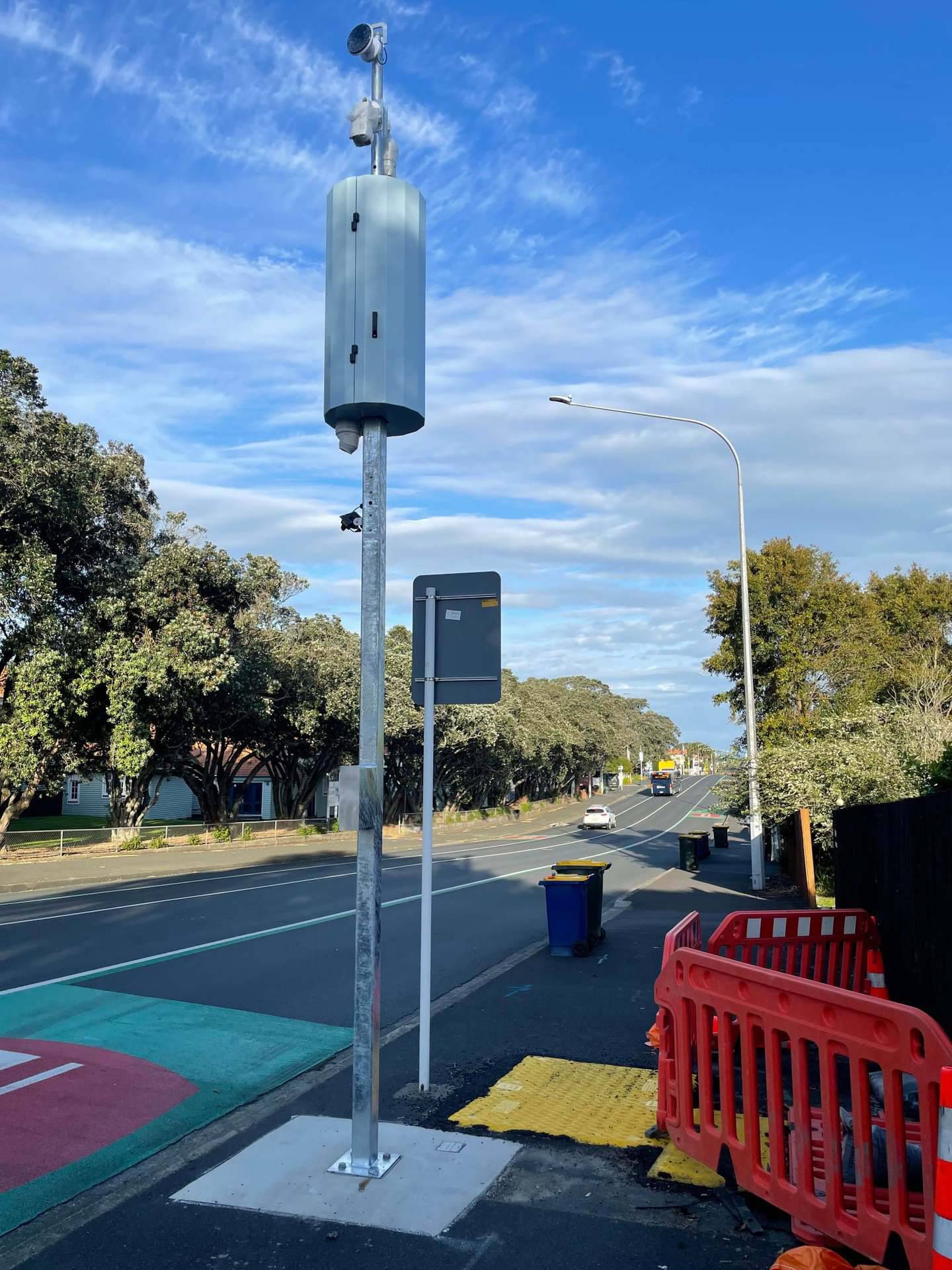 In some places, the poles leave little room for pedestrians to pass. (Photo / Supplied)

"The location of these poles in the middle of the footpath is both dangerous to sight-impaired people and massively inconvenient to walkers - the people for whom the footpaths are actually intended," one local wrote on Facebook.

Other residents pointed out the posts could present a hazard for those using mobility scooters and parents pushing twin prams.

Multiple commenters described the layout as "crazy" while others said "this looks like a third-world country result" and described the poles as a "giant middle finger to the community".

Speaking to the Herald today, John Gillon said locals would be "throwing their hands up in horror" at the placement of the poles and described their installation as "incompetent".

"The placement has not given any consideration to anyone walking or cycling on the footpath," he said, pointing out the footpath on the southern side of the road has been designated as a shared path and cyclists are encouraged to use it.

He said the local board had been pushing for the footpath on the northern side to also be converted to a shared path and that the installation of the poles was unhelpful to the local board's aim to enhance the area for walkers and cyclists.

Gillon said the placement of the poles was "really disappointing," especially given that Auckland Transport illustrations had previously shown them being placed on the very edge of the footpath.

"There's already enough poles as it is all along Onewa Road without these extra ones and for them to be placed badly is just appalling."

A spokesperson for Auckland Transport told the Herald they had to take a range of factors into account when placing the poles and the installation was not yet complete.

"The delivery team worked with traffic engineering and a road safety audit was completed, to support the positioning of hardware," the spokesperson said, adding that they need to be built around existing services.

"Standards not only apply with the footpath, but also for services running below the ground, power lines running above, tree canopies and existing street hardware.

"The installation is not complete at present, as there are other elements to be added. We are yet to install tactile warning strips by the poles for people who are visually-impaired," they said.