A man who witnessed an arrest at a central Auckland supermarket yesterday has praised New Zealand Police for the way they handled the incident.

Azar Mammadov, a US citizen, was shopping in the Victoria St West Countdown supermarket, in downtown Auckland, when he saw two officers approaching a man.

Mammadov, who filmed the incident, says the man, who was wearing no shoes and no shirt, resisted police and the officers had to run around the supermarket to catch him. 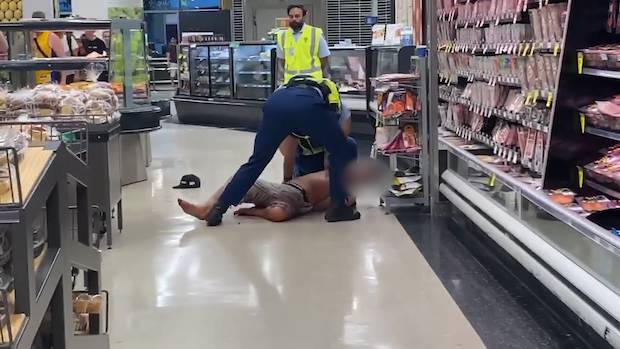 Officers had to chase the man around the supermarket. Photo / Supplied

"It was very distressing. For me, I was impressed at the way the police officers were able to manage the situation," the witness told the Herald.

"I'm from the United States - for us, that person would have been dead. But the way they treated him and managed the situation was very impressive, whatever training they had. I was impressed."

"Two officers tried to contain him on the floor, he was resisting, screaming and then a female came and started attacking the police officers physically. It was a battle," he recalled.

Mammadov says the blood that can be see in the footage was from the man falling and hurting himself, not from anything the officers did. The man left a trail of blood around the supermarket. Photo / Supplied

"They managed to calm him down and talk to him. They didn't use any weaponry to hurt him but they were trying to contain him. He appeared to be either intoxicated or have some kind of substance in his system. His reaction was irrational."

"He would have been tasered, shot, choked, he would have been dead [if it was in the United States]. I think the officers recognised they were dealing with a mentally unstable person so they treated him as such instead of just automatically hurting him."

Police confirmed that they located the man on Victoria St West on Saturday evening, around 7.45pm, and identified him as a person who had "breached their conditions".

"The man fled into a commercial premises before falling over," a spokesperson said.

He was then taken to hospital.