The first image of inside the damaged SkyCity International Convention Centre has been revealed.

The photo, obtained by the Herald, confirms the centre's roof has partially burnt while damaged material from the structure hangs precariously over construction equipment inside the building.

Dangerous liquids are visibly seen running along the floor, while light from outside the building comes streaming in through the gaping burnt-out holes in the roof.

SkyCity confirmed the roof's structure is "still intact", despite damage to the building.

The image, which has been verified by SkyCity, was captured on Wednesday while the fire was still raging.

The SkyCity convention centre rooftop is about 85 per cent burnt through. 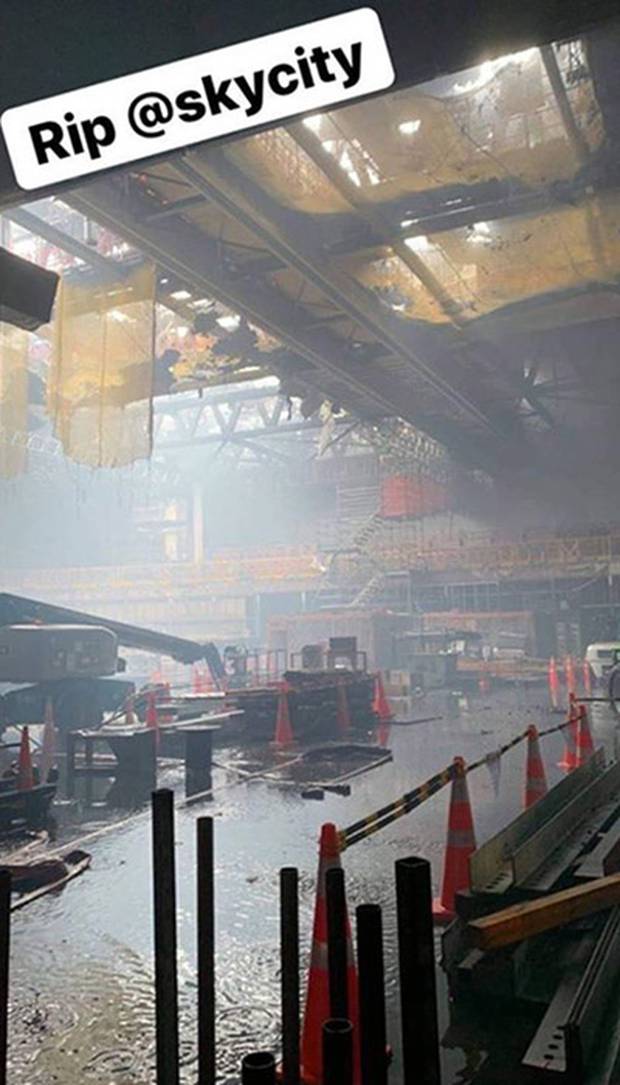 First glimpse of inside the damaged building.

Fire and Emergency says the blaze, which began on Tuesday, is now "under control and less visible".

"There is still a lot of work to be done in the area, but amazing work by Fire Emergency NZ,'' he said on Twitter.

Fire crews were hoping the roof would have burned through by 8pm last night - but flames were still emerging early this morning.

Firefighters in a cage suspended from a crane are inspecting the hot spots this morning. The current priority is to protect the sides of the building not already damaged.

At its peak, 150 firefighters and 30 fire appliances battled the blaze in the $700 million convention centre, which was still under construction.

The construction site made it one of the most challenging fires tackled in recent memory, but letting the roof burn out proved successful, regional manager Ron Devlin said.

This morning, two people at the convention centre fire site were treated by medical staff.

St John confirmed that one person had been taken to Auckland City Hospital in a moderate condition at 8.45am.

The nature of their injuries is not known but they were treated at the emergency department.

Another person required medical help before 8am and was treated at the scene.

A St John spokeswoman said that person did not need to be taken to hospital, however, and suffered minor injuries.

It comes after three people were given medical treatment yesterday.

A person at the site suffered moderate injuries and was taken to Auckland City Hospital at 1.45pm.

In a message to the Herald, a SkyCity spokesperson warned bystanders to keep away from the incident site, indicating their presence could cause dangers and damage to the scene and those working at the site.

They confirmed no one is allowed around or inside the building at this time.