A massive scrub fire on Mt Wellington can be seen across much of Auckland tonight, as firefighters battle to bring it under control.

Fire and Emergency New Zealand were alerted to the fire at 7.20pm.

A nearby resident told The Herald he looked out of his kitchen window to see the mount ablaze, with plumes of smoke rising into the clear night sky.

"I'm stuck at home in lockdown, and I look out the kitchen window to this huge fire on Mt Wellington," he said

The fire looked to be on the south side of the hill, with fire trucks at the scene, he said.

Fire service spokesman Daniel Nicholson said three fire engines were at the base of the mountain, with another three on the way.

Fenz were alerted to the fire at 7.20pm.

There were no reports of injuries, Nicholson said.

In November last year firefighters battled a massive fire at Mt Wellington, with fireworks believed to be the culprit.

Enormous plumes of smoke rose up over the north side of Mt Wellington, enshrouding the city, with numerous fires across the country as Kiwis celebrated Guy Fawkes Night.

There was no road access, so firefighters were forced to roll out "hundreds of metres" of hose. A helicopter could be seen circling above the hill.

The blaze - which just before 10pm - at its peak was 200m by 100m with multiple crews working to extinguish it, Fire and Emergency NZ shift manager Carren Larking said at the time. 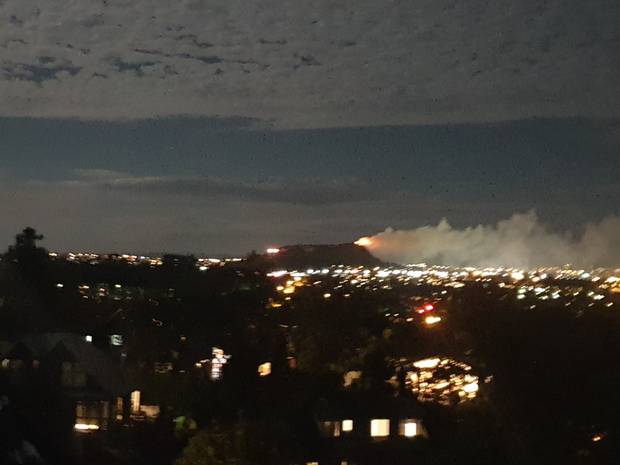