Fences keeping people out of forest areas closed due to kauri dieback in Auckland are being vandalised, and people are entering closed tracks due to a sense of entitlement, a council compliance manager says.

Compliance officers were out over the Christmas-New Year break and while most people are following the rules, 14 people will be receiving bylaw breach and trespass notices and another four will be getting formal warnings.

Vandalism was worryingly on the increase as well.

"There's been fences that have been taken down, chucked into nearby streams, signs that have been removed and it's just senseless vandalism. People that are a bit bored and pushing things over when they really don't need to," he told RNZ's Summer Report.

"We're trying to protect those ranges and those parks for all New Zealanders, all of our tourists, and a couple of silly people have gone and wrecked it for everyone." 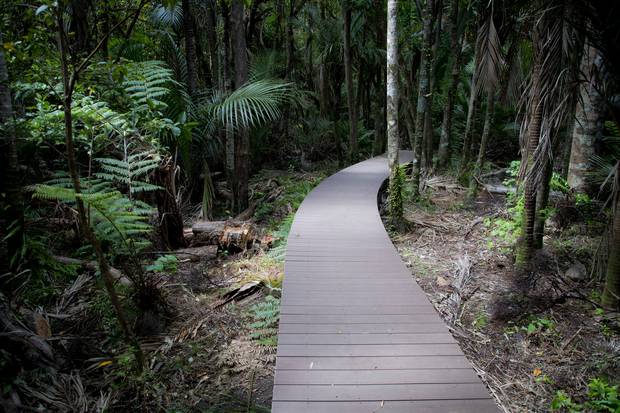 The Department of Conservation replaced the walkways at the Kitekite Falls Track in the Waitākere Ranges to help prevent the spread of kauri dieback. Photo / Dean Purcell

Pearce said people caught on closed tracks often believed they had a right to be there and the council had no right to enforce biosecurity rules introduced to protect kauri sites.

"Generally it's people going, 'this is my local area, my forest, I'm allowed to be around here'. And you've also got a bunch of people who kind of think 'well, actually the council don't have the right to exclude me from this public area'. But there's a reason we're doing this, we're not doing it for just a bit of fun."

He said it was essential people stayed off closed tracks because the micro-organism responsible for dieback was soil-based and easily transported from one site to another.

"At this stage we don't have a cure for kauri dieback, so the only thing we can do is prevent the transmission."

Kauri dieback is a disease caused by the microscopic fungus-like organism Phytophthora agathidicida (PA). It lives in the soil and infects kauri roots, damaging the tissues that carry nutrients and water within the tree, effectively starving it to death.

It is typically spread by dirt on people's footwear, meaning trampers are required to scrub and spray their shoes entering and leaving open tracks.

"There seems like a lot of other vectors as well, walking your dog, going on and off the track, they get some mud on their paws and that gets spread around," Pearce said.

"So the real simple thing is, stay out of those areas and when you're on the tracks scrub your boots, spray them afterwards." 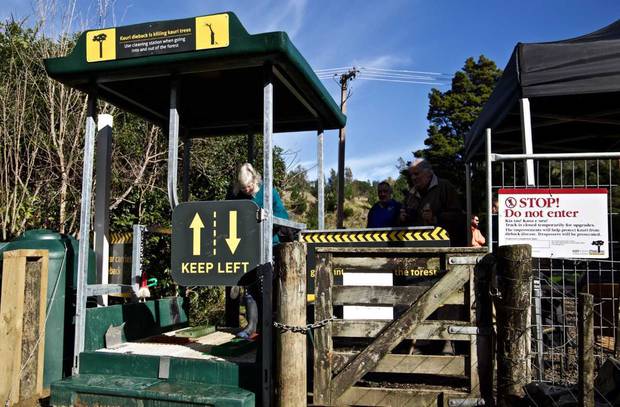 Trampers are asked to scrub all dirt from their footwear and disinfect their boots at any open tracks.

He said the council didn't want anyone going through the courts and urged people to simply stay off closed tracks and enjoy the tracks that have remained open.

"The only enforcement tool we have is a prosecution through the district court. So we had our first prosecution late last year. That's a maximum $20,000 fine. We don't envisage that it will be anywhere near that maximum, but it's really important that people take this seriously."