Concerned residents fear a child or family could be hit by "boy racers" who are creating late-night havoc on some East Auckland streets.

On Friday night a car crashed into a power pole and then caught alight, leaving one person with serious injuries and an area of Cockle Bay without power.

It is the latest incident among several in recent months that have left locals both frustrated about driving behaviour in the area and also concerned it could only be a matter of time before someone loses their life.

"There is going to be a kid get hit one day or someone's going to go off the road into a family, that's the risk," Danny, who asked for his last name not to be used, told the Herald on Sunday.

Police yesterday confirmed they are now increasing patrols in Cockle Bay to clamp down on a long-standing boy racer problem in the area.

After Friday night's crash, with the car ablaze, residents rushed to extinguish it while others tended to a passenger who was unconscious, hanging outside the smashed door window.

Two people were taken to hospital in serious and moderate conditions. The person who was initially seriously injured is now in a stable condition.

A crash investigation was under way. 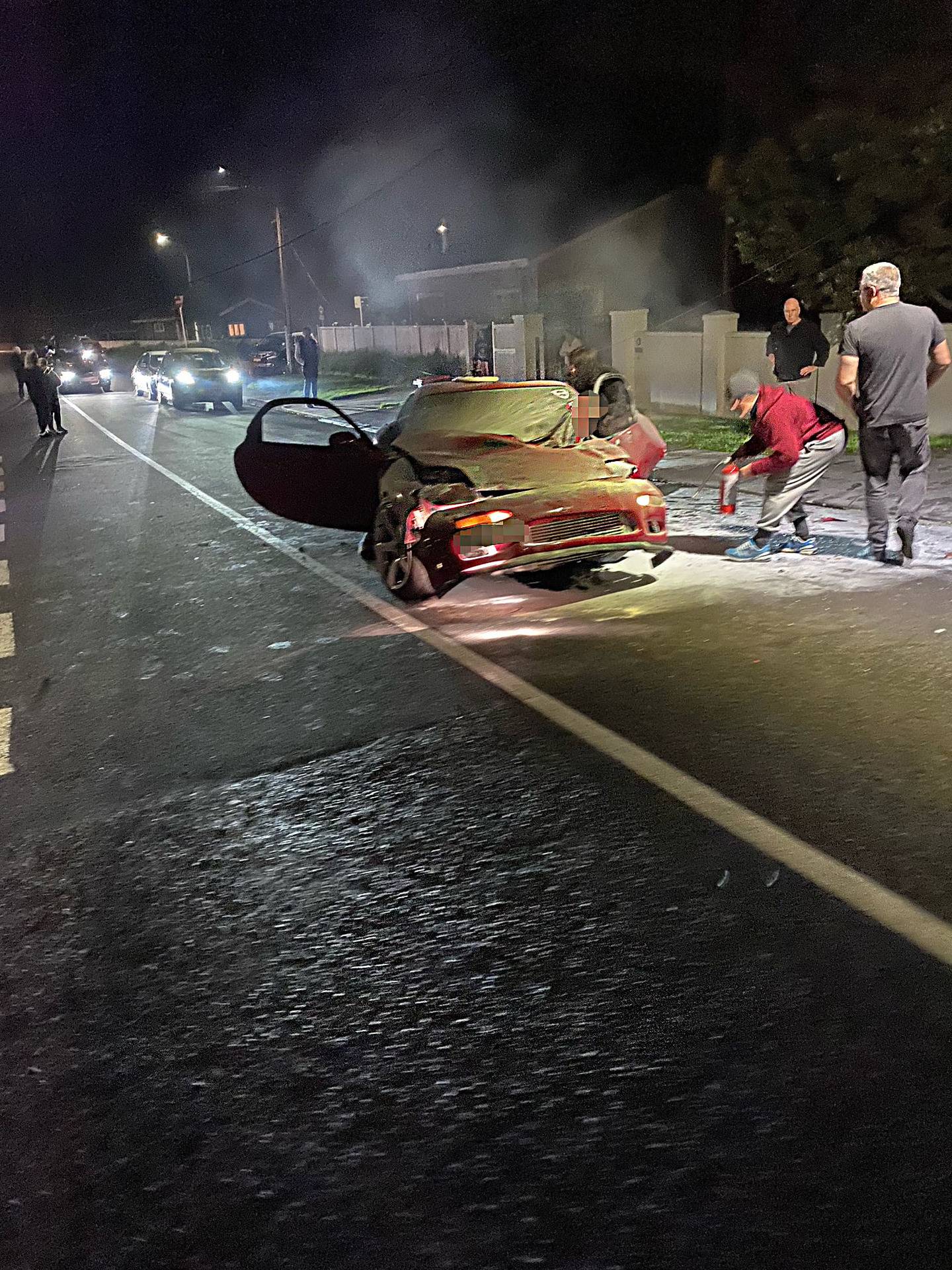 The crash put two people in hospital with serious and moderate injuries - both are now stable. Photo / Supplied

A police spokesperson confirmed officers would be undertaking additional patrols in the Cockle Bay area, saying there was "no tolerance for illegal driving activity".

"We do not want drivers on the road who are endangering the lives of people in our communities."

Danny was one of many residents who rushed to the crash scene. Living on Cockle Bay Rd near the site of the incident, he said the car could be heard doing burnouts and drifting before it hit the power pole.

"We just heard this almighty screech and then a boom," he said.

Astonishingly, residents later heard cars doing burnouts nearby as the wreck was being taken away.

It was the latest in a long series of boy-racer incidents on a well-traversed loop of Botany streets. On Thursday, a street racer's car hit a parked car just 50m away from Friday's crash site.

Danny said boy racers took to the streets almost every night and had been an issue for more than a decade. He said residents were ready to give up reporting incidents, given their frequency and a prior lack of action from police.

Danny welcomed the additional police patrols, saying the issue was likely to end in disaster if there wasn't a crackdown on such driving behaviour in the area.

Another resident, who asked not to named, voiced the same fears.

Living near the intersection of Pah Rd and Shelly Bay Pde which is frequented by boy racers, she said prior crashes that had wrecked her fence made her fearful another incident might threaten her two daughters' lives.

"It worries me a bit because the girls' bedrooms are right on that corner, it wouldn't take much more for them to lose control and come through the side of the house."

Botany MP Christopher Luxon believed a meeting between residents, police and Auckland Transport was necessary to determine what roading or policing interventions could be made.

He was sympathetic towards residents who had lived with the issue for more than a decade.

"There are long-term Cockle Bay residents who, frankly, have just given up and have said, 'I've just got to live with this noise and this inconvenience happening'."

Howick Local Board chairwoman Adele White said she had seen no formal complaints from residents in the last six months, but believed there may have been concerns prior to that.

Nevertheless, she was dismayed to hear residents were living under such stress.

"I'm really concerned and I think that we need to decide whether this is an issue with the road or a driver behaviour issue, in which case the police should be informed so they can deal with that."

The issue of street racers' dangerous behaviour has become an increasing one nationally in recent years.

Last month Wellington City councillor Jenny Condie called for a new traffic bylaw that could ban large gatherings of cars. She said the move was to target boy racers and came after complaints and fears from residents.

Also in the Waikato, a man was sentenced to six months' community detention and 12 months' intensive supervision after he fired several shots at boy racers who he claimed had terrorised his south Hamilton neighbourhood.

And last month residents in North Canterbury complained after a large gathering of street racers allegedly intimated them and drove dangerously on rural roads.

In 2009, National MP Judith Collins introduced the Vehicle Confiscation and Seizure Bill. It was a move by the future party leader to try to deal with boy racers and illegal street racing and gives the power for cars to be impounded and even crushed.