Auckland is about to set a new record for its longest dry spell, as forecasters warn the drought-stricken upper north is headed for "permanent wilting point".

On Saturday, Auckland was predicted to pass the region's previous record - a 39-day run recorded when the North Island last saw widespread drought conditions, in 2013.

A dry spell is defined as consecutive days with less than 1mm of rain and the current record for the greater Auckland area is 39 days.

With no rain forecast before then, it is almost certain to become 40 days on Saturday, Niwa forecaster Ben Noll said.

Much of the rest of the country is unusually dry, except for the western and lower South Island.

Noll said the permanent wilting point, or minimum amount of water in the soil that a plant requires not to wilt or die, was now being approached in Northland, Auckland, and Waikato.

The summer of 2012-13 featured one of the worst droughts in decades for parts of Northland, Auckland, Waikato, Bay of Plenty, Hawke's Bay, and the western South Island.

"Soil moisture deficit levels during early 2020 are quite similar to 2013, with Northland's deficits even more severe this year." 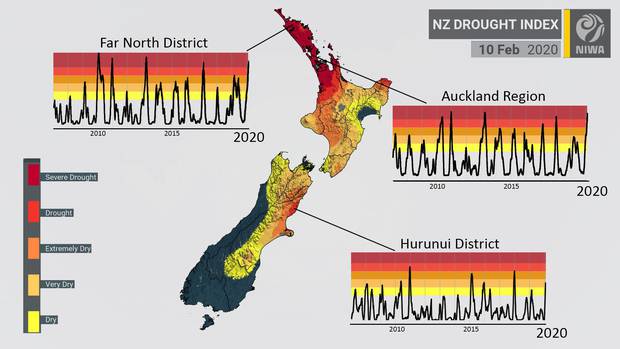 Noll said the drought has been caused by a blocking ridge of high pressure near the North Island that had helped steer dry, westerly quarter winds from Australia for much of the summer.

The drought would end when soil moisture levels return to normal – however, impacts of drought can continue for some time after that.

Niwa's climate projections indicated that drought is likely to become more frequent and severe in eastern and northern parts of New Zealand in the coming decades.

Meanwhile, Cyclone Uesi is expected to approach the South Island next week, bringing a likelihood for heavy rainfall.

A moist, humid airmass coming with the cyclone could increase the chance for showers and thunderstorms for many parts of the country next week.

Other recent dry spells across the country include: