Auckland commuters are taking twice as long in peak-hour traffic to travel one of the CBD's busiest roads, ever since roadworks reduced Quay St to one lane.

Statistics from the Automobile Association show Quay St strengthening and "enhancement" projects, which began in December 2018, have increased travel times along the east-west thoroughfare "very sharply".

At the end of last year, the median travel time between Hobson St at the western end of Auckland CBD, and State Highway 16 on the eastern side, was 13 minutes.

In December 2018, the same 5pm journey only took commuters five to six minutesalong the road, double-lane each way.

"What the data shows is a very sharp increase in congestion immediately after the Quay St work began. Basically, Quay St turned overnight into somewhere you really want to avoid in a car," AA senior advisor infrastructure Sarah Geard said.

"The works have created an afternoon peak that never used to be there, for traffic heading into town. It used to take 5 or 6 minutes to drive along Quay St at the busiest time of the afternoon; it now takes 13 minutes."

"In between, there's no let-off – the middle of the day is now looking more like rush hour used to look, prior to the works." 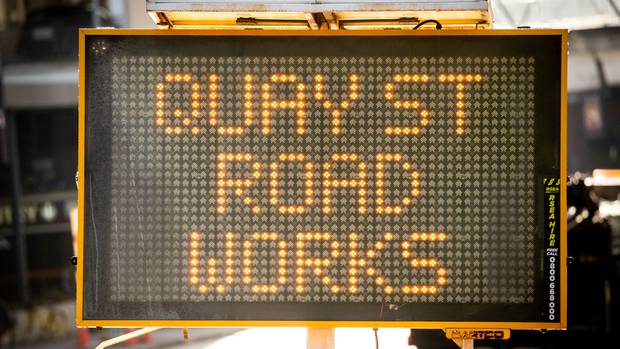 Geard said the six- to seven-minute delay "might not seem like a huge amount, but anyone stuck in it will really feel it – when the distance is so short, it means piles of time spent crawling, or not moving at all".

The projects affecting Quay St are the strengthening of the sea wall, an "enhancement" of the street, which will permanently reduce four lanes of traffic to two, adding a cycleway and bus lanes and widening footpaths.

At the time of its reduction to one lane, AT traffic planning initiatives for "maintaining through-traffic capacity" on Quay St included: some restrictions on turning movements into and out of side streets, some traffic light phasing, prioritising the northern footpath east of Queens Wharf for bikes and the southern footpath for pedestrians.

The data comes as Auckland Central MP Nikki Kaye has followed up on her crisis meeting with Auckland Transport a fortnight ago, with a letter to Auckland Mayor Phil Goff.

Kaye had asked for a review of the consent planning for government and private developments as 63 Auckland CBD streets will be disrupted by public projects alone in 2020.

The National MP said she subsequently has received one of the most "exceptional" levels of constituent feedback, with around 100 people getting in touch with her in the days following the Herald story.

"As a result of the story last week I have had many people across Auckland raise issues regarding wider works and central Auckland," Kaye said.

"Some people have been very specific about issues they may have raised with Auckland transport around other issues from light phasing, to intersections, locations of bus stops, poor signage and issues with works in specific streets.

"I have written to the Mayor but my intention is to have a personal meeting with [Goff] and Auckland Transport to work through the issues raised in my letter and additional issues raised by Aucklanders as a result of the story."