In a letter to city leaders, an Auckland resident described downtown Auckland as sinking into anarchy and becoming a lot like 1980s New York City, just with fewer murders.

The resident, who does not want to be named, said he no longer feels safe in what used to be a thriving CBD, and worries about his wife who has been followed by unsavoury characters half a dozen times.

In 2021, more than 1000 people have been assaulted in the inner city, and the amount of violent crime is on the rise, as is the number of rough sleepers.

Many shops are now vacant, with many small businesses having gone bust with five years of construction through the central city streets and the Covid-19 pandemic. Many others are hanging by a thread with the construction not expected to finish until at least 2024.

With a mayoral election looming, the Herald asked four leading candidates on what their plans are to clean up and reinvigorate the CBD. Here is what they have to say:

If elected, businessman Leo Molloy is vowing to put pressure on central Government to get things done.

"I have a very loud voice as you know, people listen to what I say. When I get involved and start shining a light on an issue, people are going to start sitting up and own the problem," Molloy said.

"I can ring anybody in Cabinet, and I can get a message across to anyone in Government if I want to."

Molloy says the CBD was "festering sore and an indictment" on the city, and he would make it one of his priorities to clean it up.

He released a seven-minute Facebook video last Saturday in which he suggested installing water sprays among other things to keep the "drunks and undesirables" from congregating.

The suggestion was criticised by social development organisations as "inhumane". But Molloy claimed he had been misunderstood. 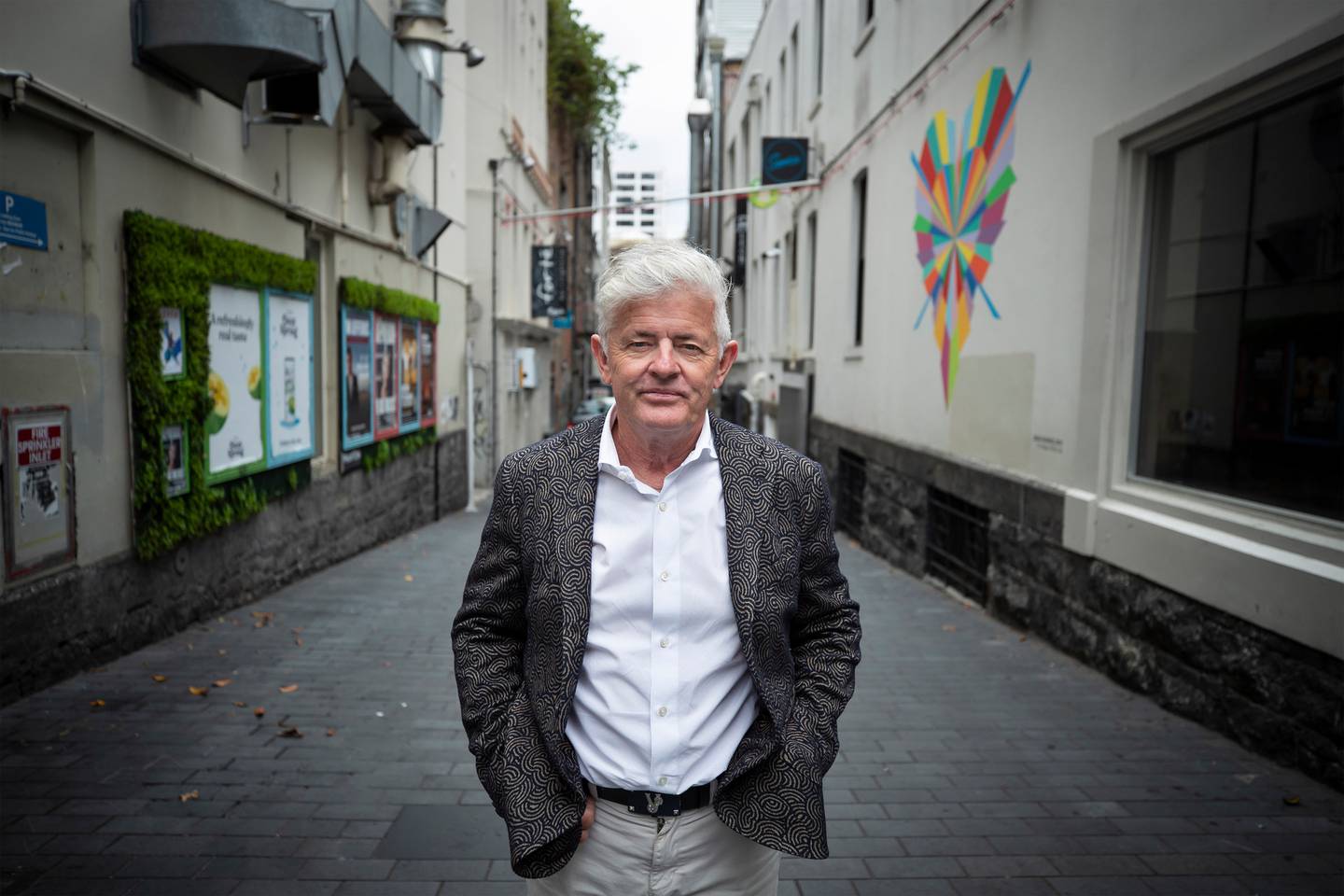 "What I said was that there are a lot of people in this area who have fallen through cracks in life," he said.

"They are vulnerable people and there's no wraparound services to help them, but then there's another element who are here in the centre of town who are genuinely nasty thugs."

Auckland was not getting its fair share of police, Molloy said, and police are stretched, understaffed and under-resourced.

"Clearly we need more policing here, and you need to shine a light in this part of the city. You need to put better surveillance to know what's going on," he said.

Molloy said he was horrified by the number of rapes, the gun and gang violence that happen regularly and that rough sleepers were a "huge problem".

"You can't just displace them, if you do that then they'll just go somewhere else like K' Road and do exactly the same thing. So, you got to deal with them by giving them some sort of long-term hope. But that's a central government thing," he said.

"The key failure of central government surely is that they're using this area of Auckland's inner-city as a dumping ground, and Goff has done nothing about it.

"Support services don't exist. No one cares. They just dump people here, MSD (Ministry of Social Development) does, and both the Council and Heart of the City just turn a blind eye. They are in denial of the problem."

"The homeless people here, I have nothing but sympathy for them. I feel the hopelessness of their situation...I have nothing but affection and hope for them. But when you don't give them hope, they are hopeless. When they're hopeless they do hopeless, desperate things and there are too many victims along the way," he said.

Molloy said he had been out and about on the streets speaking to people almost every day.

Safety in the central city will be high on his priority list and will push for a high-profile police presence, including reopening the downtown police station.

"You need good surveillance and the place illuminated. With a city about to reopen, we're going to have cruise ships here pretty soon and can you honestly say that you feel safe here walking around at 10 o'clock at night," he said.

"The inner city is your premium area, and that's what we've got to turn it back into.

"The inner-city rail has been a disaster for the city, small businesses have been torn out of the city because of it so that's a major problem.

"Somehow we have reached out to them and reactivate the small business community." 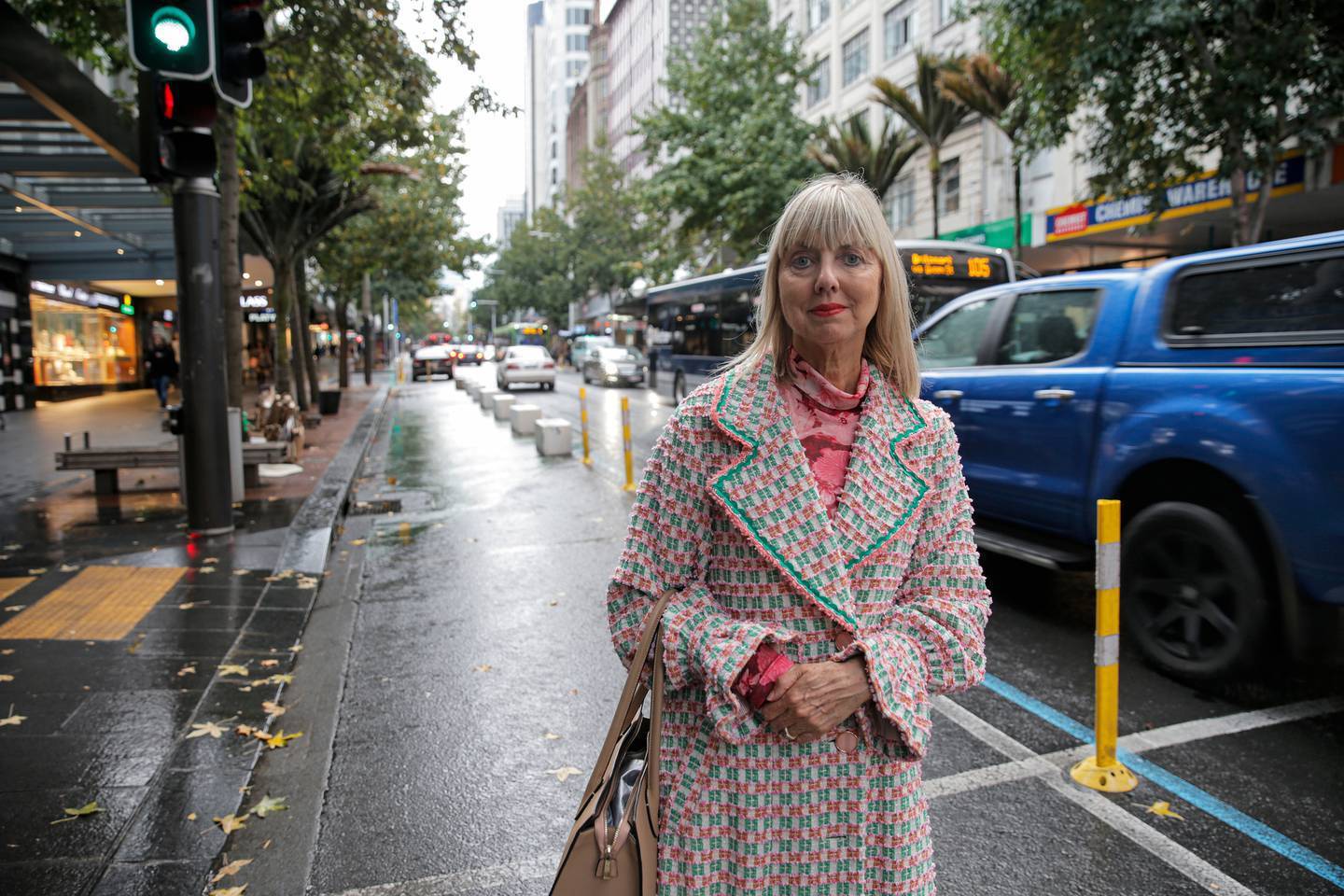 Heart of the City chief Viv Beck says her focus will be to "bring back the buzz" to the central city if elected.

"Auckland is a beautiful city with a lot of opportunities. I've seen first-hand the strength of our people and our potential... however, there are issues that need to be resolved quickly, some of which have been exacerbated by Covid-19," she said.

"As Mayor, I would take clear action on things we can do locally, and advocate strongly on matters that require change at central government level."

Beck said Covid had presented major health, economic and social shock across the city and it needed a cohesive approach to recovery.

"My style of leadership will seek to bring the best from each party in a very focused way," Beck said.

"Auckland city does not have its fair share of police resource and this needs to be addressed with Government. I'm hearing similar concerns from other areas across Auckland too," she said.

"A police presence needs to go back into the downtown area and this needs to be resolved urgently, along with safe zones and increased security."

Beck said it is not okay for people to sleep or beg on the street.

"However, we need to ensure people have alternatives," she said.

"Before covid, there was a successful programme in place to house rough sleepers and as Mayor I want this to be resurrected and see an end to the emergency housing put in place as a Covid measure."

She said as mayor, she would want to see the city and town centres across Auckland have positive alternatives to begging scaled up.

"Heart of the City's programme delivered with the Auckland City Mission is a good model. This programme has operated successfully for over two years and our current Mayor said in his last election campaign that he would like to see this too," Beck said.

Beck said other countries have a "night mayor" to grow the night economy, and she would look at something similar to grow the city's night-time economy.

"Aucklanders are rightly asking 'is this as good as it gets?'. The answer is resoundingly no. As Mayor, resolving these issues will need a much more focused and efficient Council and this will be a key priority for me," she said. 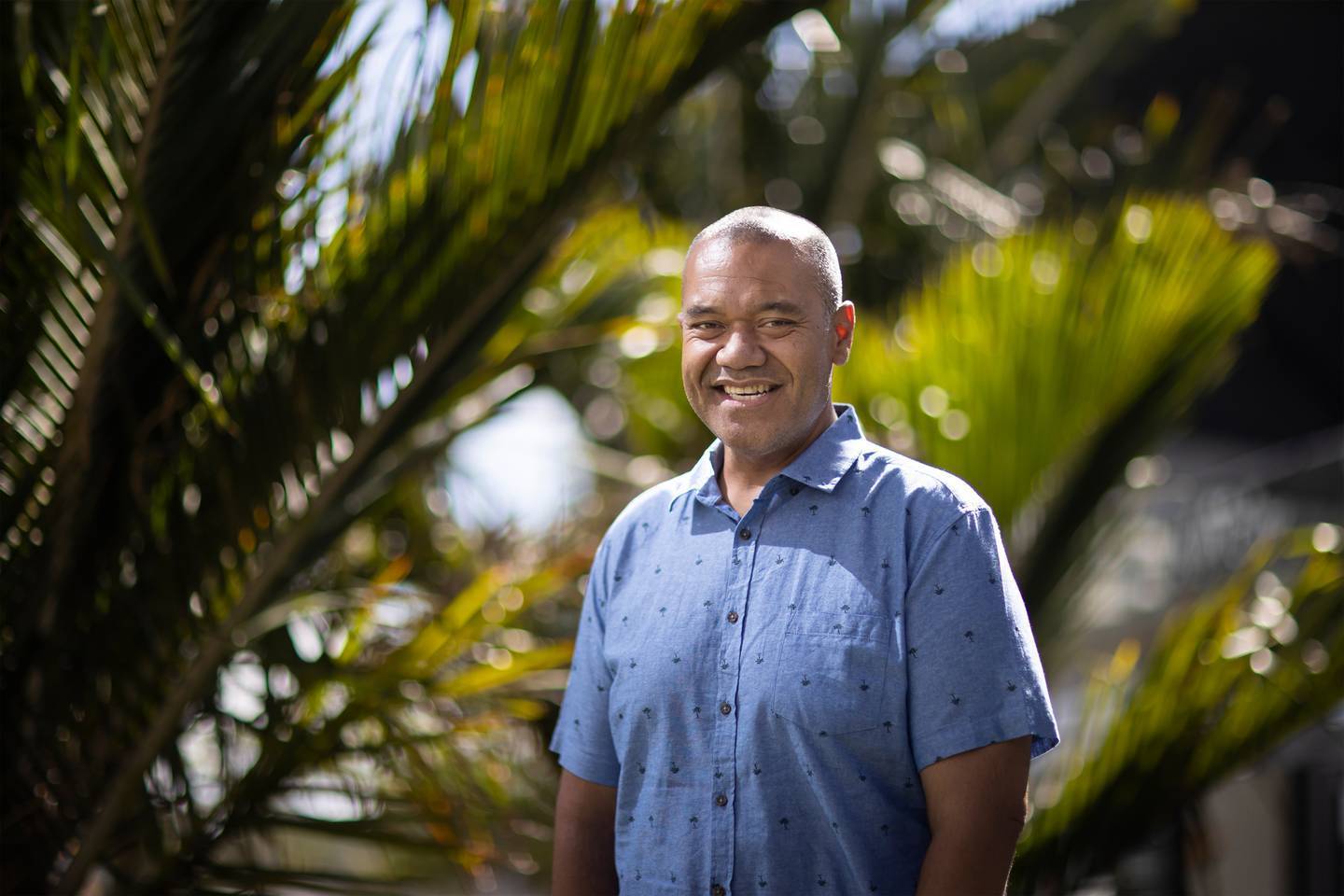 Collins, a councillor representing Manukau since 2016, said the city centre was a destination point for visitors, a hub for business and home to more than 40,000 residents.

"The impacts of Covid-19 and future development have been strongly felt in this part of the city, but we can plan for better times ahead," he said.

"To get there we need more people coming into the central city. Fare-free public transport means more visitors to the central city which is great for business, connecting with friends and increased passive surveillance."

Collins said it's time to have a good look at the allocation of the targeted rate collection of more than $20 million per year.

"As Deputy Chair of the Community Development Committee last term we met on a regular basis with Police, social workers, local businesses, artists and the City Mission to focus our discussions on creating a safe and vibrant community," he said.

"This would be an approach I would take alongside the City Centre Advisory Group."

Free public events utilising public spaces in the inner city could be the draw needed to pull people there, he said.

"I would bring together artists, creatives and inner-city residents to whiteboard some great ideas together allowing them to light up the city," Collins said.

He said Covid-19 pandemic had shown that rough sleeper and the homeless community can be housed and cared for.

"Our ongoing support to the City Mission, Housing First and thru our library services ensures that we see and treat them as part of our community," he said.

"The spray and walk away approach is dehumanising – we are at our best as a community when we draw from a wellspring of generosity and hope." 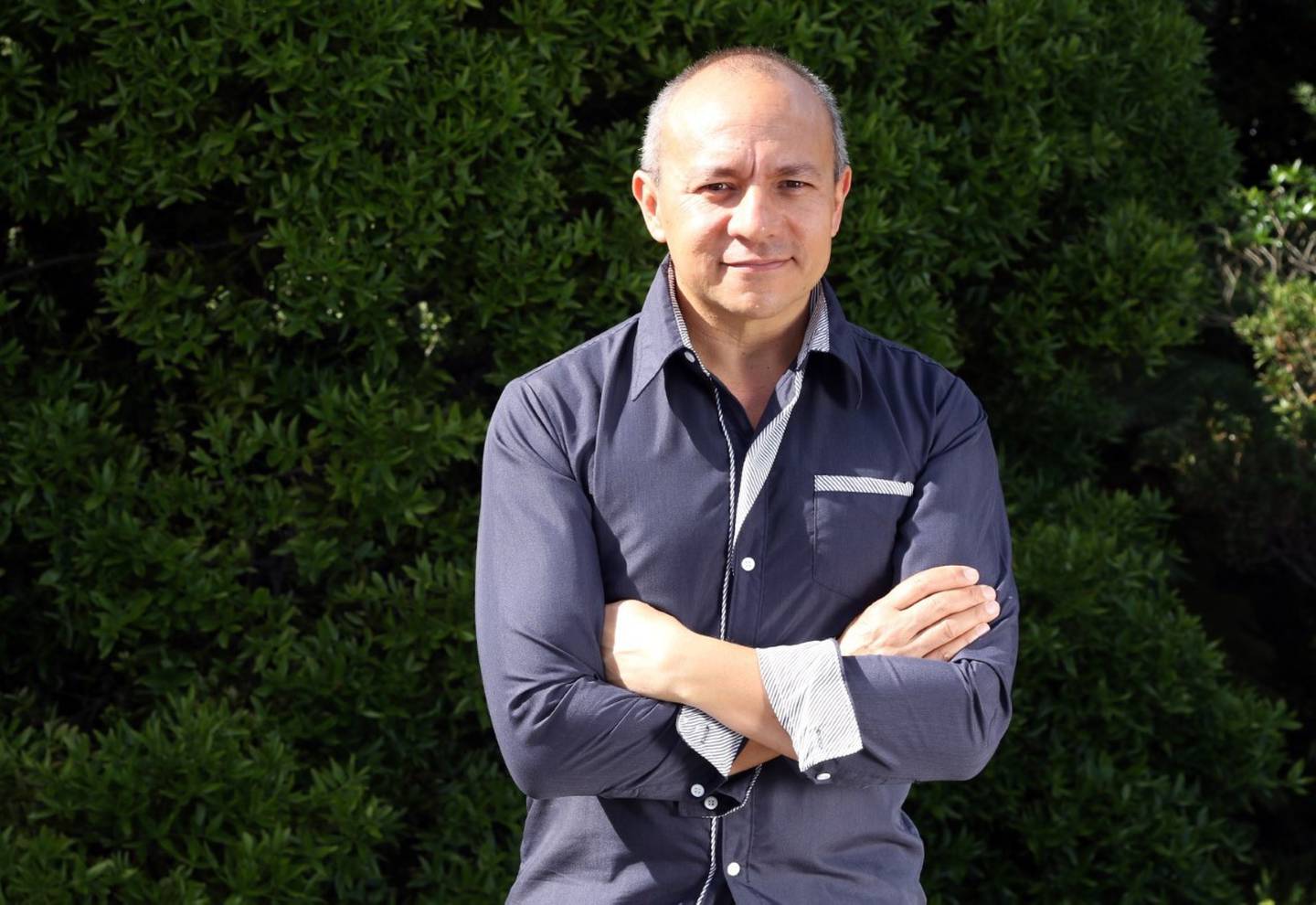 Craig Lord, a returning mayoral candidate who came in third in 2019. Photo / Supplied

Returning mayoral candidate Craig Lord said his focus will be on greater Auckland, particularly the "forgotten regions" like Rodney and Franklin, not the inner city.

Lord, who came in third in the 2019 mayoral race, said it's wrong for Auckland Council to put more focus on the CBD than the rest of the region.

The problem in the CBD required major input from police and central Government, he said.

"I would like to see a downtown CBD station opened again with the primary role being feet on the street - but that's a Government fix. I'll lobby for it," Lord said.

"Currently the CBD policing is done out of the new College Hill station but there are no boots on the ground anymore – it's callout by car only and as the police are focusing on Family Harm callouts the CBD is neglected."

On rough sleepers, Lord believed there was a "hard-core group of them who choose to be that".

"They will never be removed as being there is lucrative for them. For the others outside of that core group, it is an issue that the Government and social Service departments need to invest in," he said.

"Council can help but it's not the core role of a Council."

He questioned the need to focus and prioritise the CBD over other regions in Auckland.

"People do not want to go to the CBD for any other reason but the bars, restaurants and nightclubs – and even that is changing," Lord said.

"Once upon a time it used to be a place for special shopping trips but now that so many areas have large shopping malls the public see no need to venture into the CBD.
It's awful to navigate, and not worth the time.

"The designer brand stores are for tourists and a few rare locals – which means those who are focusing and lobbying for big spends in the CBD to reinvigorate it have self-serving agendas."

Lord said much of the Queen Street changes to date "have become a disaster for the shopping precinct, and many will eventually close and abandon the CBD".

"I see no reason why Auckland Council should be placing more focus on the CBD over any other area of the Auckland region as the priority should be to provide core services to everyone," he said.

Lord said he understood how much tourism meant to New Zealand as a whole.

"But when one particular area of a city is given so much special treatment over another, that's wrong," he added.