Residents have vented their frustration after members from the notorious gang Black Power blocked a road in West Auckland to do burnouts in front of a funeral home.

Around 11.47am members of the gang were captured doing burnouts down Universal Rd to pay their respects in front of Morrison Funeral Home, a source told the Herald.

The source added that one of the motorcyclists had the word Black Power on their sleeve.

In a photo, the members can be seen blocking the road as a car does a burnout behind them.

A video also shows a car doing doughnuts and skids next to Countdown as people watch.

A Facebook post about the burnouts has caused controversy, with many branding the gang's actions as "annoying" and "inconsiderate".

"Time and place for burnouts, doing it in the middle of the day on a busy road is just a bad look," one person said.

"Good tribute but to f***** stupid dickheads endangering the life's of asthmatic patients stuck in traffic, just because there mate/brother died doesn't give them the right to almost kill a bystander," a person wrote.

Another added: "Should be doing it at their club (gang) house ... can you imagine if any of us held them up!" 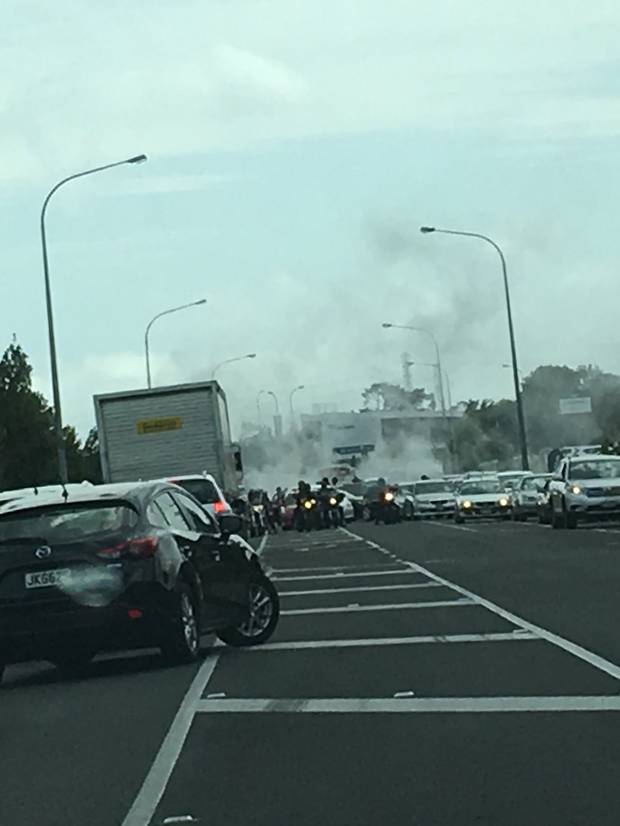 In a photo the members can be seen blocking the road as a car does a burnout behind them. Photo / Supplied

However, some people thought it was a nice tribute, saying it was a "cool send-off".

"I'm all for this in remembrance," one wrote. I don't think it has anything to do with gang members, patches or not. I love a good burnout after a funeral if that's something the person that passed away would have liked."

Another agreed: "They are sending a loved one off in style, they are grieving come on we all deal with things differently. Sending the family my condolences. Sorry for your loss."

One wrote: "I'm sure the festivities will continue back at the pad ... it's but a minute's inconvenience. I'd be happy to sit and watch the show."

A police spokesperson told the Herald: "Police were notified at 11.47am today of a gathering of motorcycles on Universal Drive, Henderson."The caller was advised to contact police if there were any further issues."