Hibiscus Coast residents have photographed a stunning display of bioluminescence in Tindalls Bay, north of Auckland.

Gulf Harbour resident Molly Smith saw images of the algal bloom at Tindalls Bay posted to social media and thought there might be a chance to see bioluminescence, so headed down as soon as it was dark.

The display, caused by a plankton bloom, lit up waves in the area last night.

"I've never seen it before," Smith said. "It was just incredible to see." 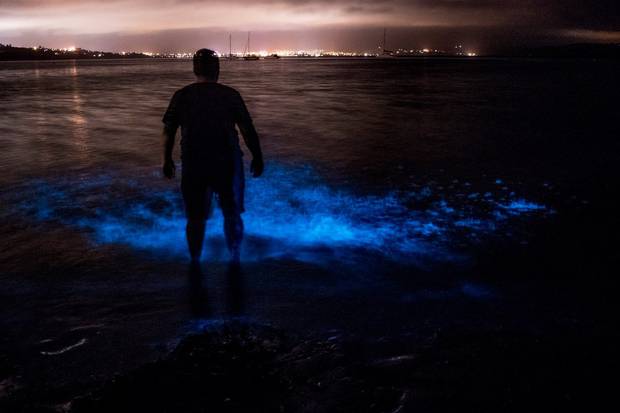 Molly Smith's husband stirs up the plankton to make it light up. Photo / Molly and Casey Smith

She found capturing the images to be tricky.

"My poor husband got a little wet and chilly, moving the water to get it to glow for the photos."

Photographer Alistair Bain was also alerted to pink algae at Tindalls Bay earlier in the day.

Despite his experience with night photography, he said photographing the glow effect was difficult.

"With most night photography you can just focus in on a star to focus the whole shot, whereas with capturing the bioluminescence you're trying to capture a full range of distances in the dark."

Alistair said he had travelled all over New Zealand capturing beautiful scenery.

"So it was quite special being able to capture something so unique so close to home."

Marine scientist Daniel Ward said the "glow" was caused by an oxidation reaction within the plankton organism's body to produce light, to distract and evade predators.

He said it could be difficult to predict when the blooms of marine plankton would show up, even in their preferred warmer water temperatures.

"For the best experience of bioluminescence, the water needs to be disturbed, [through a] wave action or simply a swimmer splashing about as this triggers their defence mechanism," Ward said.