It's the coat hanger fixture of our biggest city that links northern suburbs with the bright lights of downtown, and beyond, but motorists are being encouraged to - where possible - avoid Auckland's Harbour Bridge until major structural repairs are completed.

That was backed by Auckland Business Chamber chief executive Michael Barnett, although Barnett also took aim at the "lack of action" that had, as with lack of adequate planning over the city's water supply, again exposed Auckland's vulnerability.

"This should send some really bloody strong signals to the council and the Government that we need to address vulnerabilities and make a decision," said Barnett, who wants a rail/road tunnel across the harbour.

The four centre lanes of the 61-year-old Harbour Bridge have been closed since a 127km/h wind gust tipped two trucks onto their sides on Friday, one of which - carrying a shipping container - severely damaged a load-bearing centre span. New images reveal the extent of the damage. 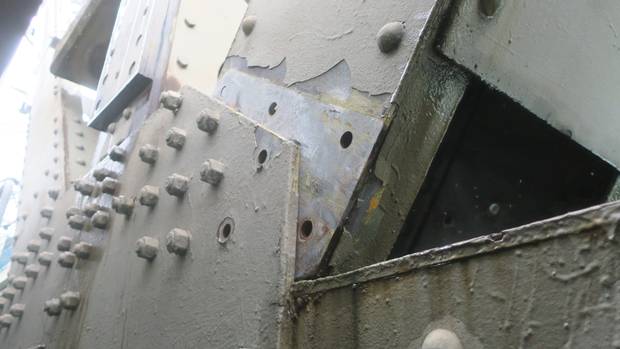 Bolts on one of the bridge's struts were shorn off by the impact of a truck crash. Photo / Supplied

The impact sheared the strut away at the bottom, and meant the load carried by the strut had now been redistributed throughout the rest of the bridge, which is now being checked, Gliddon told media yesterday.

"There's no risk of the bridge falling down, but it's not appropriate for vehicles to be driving across without that strut operating."

The four centre lanes were closed, but the four south and northbound clip-on lanes weren't connected to the main structure of the bridge and therefore safe to use, including by trucks, although Gliddon encouraged truck drivers to use the Western Ring Route to help ease congestion.

The steel strut, which runs from the road to the top of the bridge, is 400mm to 500mm square, bolted at the bottom to a large steel plate and has 15 to 20 other bolts holding it in place, and will take several weeks to replace, Gliddon said.

"I expect it will be four to five weeks, maybe longer. We've got our engineers working on it, our contractors are getting resources ready and we've got manufacturers lined up to manufacture the strut when we're ready to go."

A temporary fix was being investigated which could allow light vehicles to use the centre lanes again in "a week or so", but there was no guarantee, Gliddon said.

Long term, a second harbour crossing would be required, but for now he encouraged motorists to avoid the bridge, which is usually crossed by 170,000 vehicles on weekdays, where possible.

Barnett encouraged businesses to use the strategies they'd used during the Covid-19 lockdowns.

"Be creative, look at flexible timing. Retail could open later, offices should vary start and finish times, and some people should work from home."

Some may have been wishing they were already working from home when Friday's crash brought large parts of the city to a standstill.

Motorists had to spend up to seven times longer in traffic than normal, with a 17km trip from Albany into the city's central business district taking between 50-and-70 minutes, compared to a normal 12 minute off-peak commute, the Automobile Association said.

Two Herald journalists spent an hour and a half driving three blocks from the top of Nelson St to the Victoria St intersection. The strut on the bridge's arch was bent and twisted after being hit by a truck. Photo / Supplied

National leader Judith Collins seized on Friday's chaos with a promise to build a rail and road tunnel under the harbour, and transport minister Phil Twyford also backed a new harbour crossing, saying planning was under way.

Meanwhile, dramatic accounts of the moments the two trucks tipped emerged on social media and in reports to the Herald.

Witness John Lynne told the Herald it was "fricken' scary".

Two drivers from another furniture truck that pulled up at the scene to help were so "petrified" of getting back into their vehicle - which was being rocked by the winds - they instead took refuge in Lynne's Mazda.

"Oh bro, he's going over, oh s***," a nearby motorist can be heard screaming in the video.

Those in the vehicle then noticed a second truck had also been blown over.

Traffic at a standstill on Victoria St on Friday evening. Photo / Dean Purcell