A woman has made a stunning discovery inside the wallpaper of her Papakura home.

Opaheke resident Talia was stripping back the vintage wallpaper in her house earlier this week when she uncovered a message written on the wall.

The message, which was written in both English and shorthand, claims there is hidden treasure at the property.

"The treasure is hidden five feet from the house, or in other words under the letterbox ..." the message says.

Another line written in shorthand underneath says "to whom this may concern".

Talia told the Herald she made the discovery after looking at changing up her daughter's room.

"It's my 2-year-old's room and she has been peeling pieces off. She is swapping rooms with my oldest son so I wanted to make it nice for him, less flowery - so decided to redecorate.

"I stripped the top layer of wallpaper off and found Shirley's name first. I'm a bit sentimental so knew I couldn't take it down without a picture first. I was surprised to find two more messages.

"I thought awhile about what they were like, how they lived back then."

It appears the message came from two sisters who previously lived in the house.

While Talia isn't hopeful of finding any treasure, she hopes her children will have fun searching for the mystery item and would love for the Taylor family to see the message they left all those years ago.

"The treasure message seems like a playful prank to me but my kids and I will have a try this weekend.

"The letterbox has moved since those days so I'm going to have to do some more digging to find the right spot.

"[I'm] hoping they or someone who knows them might see this and have a nice nostalgic moment. Shirley Taylor and Kathleen Taylor." "The treasure is hidden 5 feet from the house, or in other words under the letterbox..." the letter says. Photo / Supplied

Talia's discovery has garnered attention from the community, with many curious as to what she'll find. 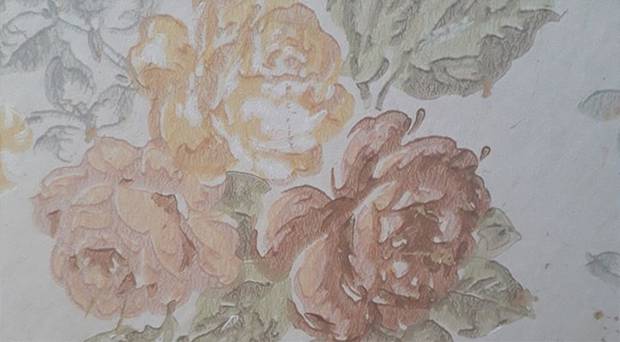 The wallpaper before it was stripped back. Photo / Supplied

"Have you looked under the letterbox? That is priceless, what a cool find," one asked.

Another added: "When are you going to dig? Could be a goldmine under there without knowing!"

Talia said she never thought her discovery would get so much attention and plans to dig near the letterbox at the weekend.