A group of teenagers who trashed an Airbnb after holding a drunken party are now taunting the property owner on social media.

But the owner, who did not want to be named, isn't backing down and has already found some of the young people who attended the party, and has reported the matter to police for them to investigate.

The woman said she knew as she opened the door to the new central Auckland apartment, which she had put on Airbnb in July, that something was wrong when she was overcome by a stench of alcohol and urine.

"As soon as I walked in I could smell the stench of alcohol and urine, they hadn't flushed the toilet. It was awful.

"There was a pile of laundry and all these crumbs and other things on the floor, stains on the carpet. A massive hole in the wall and a broken door." 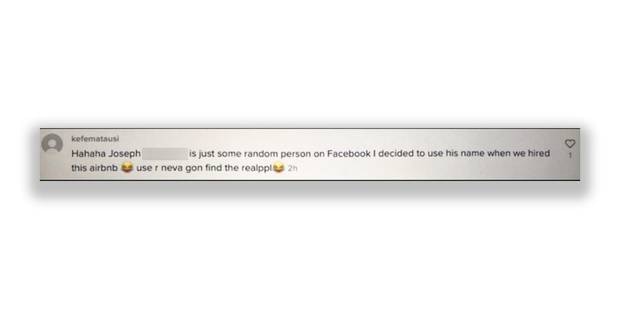 The teen who hired the AirBnB sent the apartment owner this message, taunting her that she would never be able to find him. Photo / Supplied

She said she had been contacted by a person through Airbnb who had wanted to rent her property for Saturday night.

She was told it would be for two people who were in town visiting family. The man said his "younger brother" would be picking up the key, which she agreed to.

As Auckland is in level 2.5, she did a contactless check-in, which meant she did see him on CCTV footage but never got to meet him in person.

She eventually went to the property that afternoon and made the discovery.

A wall was also damaged during the drunken teen party at the central Auckland Airbnb apartment on Saturday night. Photo / Supplied

While Airbnb would cover the costs of the damage through their host guarantee policy, she was now more annoyed at the antics of the teens.

"Apparently there was another party organised by a bunch of high schoolers in Auckland the same night, and I think that it's an issue that needs to stop.

One of those who helped organise the property had since messaged her on social media - under the name - "kefe mata usi" which is a swearword in Tongan, laughing that she would never find him.

"Hahaha (the booking name) is just some random person on Facebook I decided to use his name when we hired this airbnb. use are nva gon find the realppl," he wrote.

A door separating the bedroom from the lounge was broken during the teens' drunken antics. Photo / Supplied

She had spoken to the father of a 14-year-old who had been at the party for a short time.

Brand-new carpeting was left stained throughout the apartment. Photo / Supplied

The father told the Herald his daughter learned about the party on social media.

Arriving with a friend about 8.30pm, there were about 25 others already there, aged between 14 and possibly 17 or 18, drinking.

"There was some very drunk people there, then these teenage boys really started laying into the liquor and they were wrestling and doing stupid stuff like that and then it started getting out of hand and she left, with her friend."

She also witnessed someone fall through the door.

"She's now in a huge amount of trouble ... but she didn't do any of the damage. [Daughter] has well and truly learnt her lesson."

He said she didn't know any of the people at the party and that he sympathised with the property owner.

The incident now left the owner and her family wondering whether to bother to continue with Airbnb.

"It's actually making me question whether it's safe to do this whole thing. We're reconsidering this whole Airbnb thing, we just don't want to risk it anymore."

Derek Nolan, Airbnb's Head of Public Policy for New Zealand and Australia, was "deeply disappointed" to hear about the incident and suspended the guest's account while it investigated.

An empty box of Vodka Cruisers and an empty bottle of whisky [obscured] were found in the wastepaper bin. Photo / Supplied

"We stand ready to support the host through our Host Guarantee. The reported behaviour is completely unacceptable and has no place on Airbnb.

"While negative incidents are extremely rare, Airbnb has zero tolerance for such activity and we continue to communicate this to our community. The overwhelming majority of hosts and guests are good neighbours and respectful travellers."

Airbnb guests must be at least 18 years old.

A police spokesperson said a complaint was received on Sunday relating to damage reported at an Airbnb property in Auckland's CBD over the weekend.

"Further information has been provided to police today and this information is currently being assessed."