Uncertainty over travel times to the airport is to become a thing of the past, as work begins this year on a key link in plans for rapid transit between Auckland Airport and southern Auckland.

The new bus and rail interchange is part of a wider project to bring rapid transit from the airport to Puhinui, and eventually on to Manukau and further east, via priority lanes on State Highway 20B. 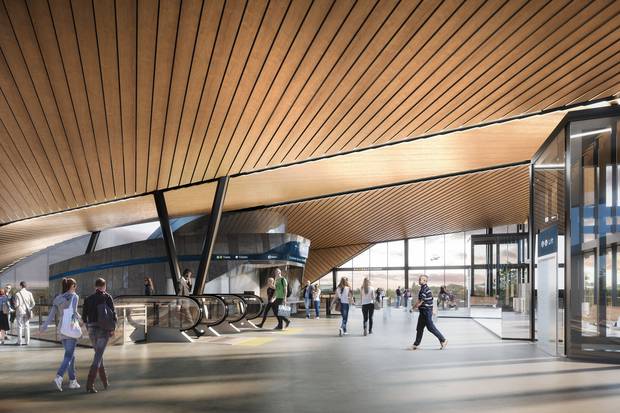 Artist's impression of a major upgrade to Puhinui Rail Station, with work planned to begin in October. Image / Supplied

Work would begin in October and take 18 months, Goff said.

"This project allows for congestion-free travel to the airport and its employment precinct for people across Auckland. It will be welcomed by workers and visitors to the city. The impressive new station will mark out the South-Western gateway to the city.

"It provides a modern, safe and weather protected environment to allow people easily and conveniently to transition between road and rail services.

With new interchanges recently opened at Otāhūhū, Panmure and Manukau, the new station at Puhinui would help create a 21st century public transport system allowing for convenient, regular and quick travel around the city, he said.

"[The new station] is planned to be open before the Apec leaders meeting in 2021."

Travel times from Puhinui Station to Auckland Airport will be 10 minutes in priority lanes; 22 minutes to Manukau; and 46 minutes to Britomart Station. 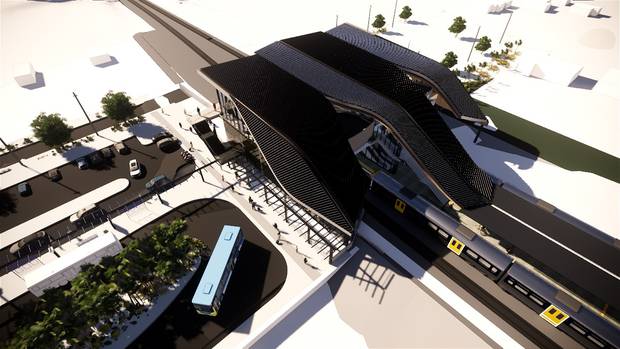 The sleek exterior of the planned new Puhinui Rail Station interchange, as seen from above in this artist's impression. Image / Supplied

The Puhinui interchange is part the wider Southwest Gateway programme, where the Transport Agency, Auckland Transport and Auckland Airport are working together on transport projects improving access to the airport and its surrounding area to benefit workers, travellers, tourists and freight movements.

The total project cost is $60 million — 75 per cent funded by the Government, with the remainder coming from Auckland Council and the Regional Fuel Tax.

"Any Aucklander with access to the rail network will have a fast and convenient 10-minute bus connection to the airport. One of the first tasks I asked the Transport Agency to take on when we came into government was rapid public transport from Puhinui station to the airport.

"It will be a bus service to begin with and in the future, it will become part of a rapid transit route connecting to Manukau and Botany with a dedicated busway or possibly light rail. The contract being awarded means we are another step closer to rapid transit to the airport."

Goff said more certainty would be welcomed by those travelling, most particularly, to the airport. They would now have consistency on how early they needed to leave for their flights.

"[Living in South Auckland], I'd always leave half an hour earlier, just in case. With a car you could be there in 25 minutes or it could be an hour and 10 minutes. What we can provide [through this project] is certainty of timing."

The Government has also already put its support behind light rail from Auckland's city centre to the west and to the airport, with Prime Minister Jacinda Ardern earlier promising to build light rail, also known as modern day trams, to Mt Roskill within four years and then to the airport and to Westgate in West Auckland within 10 years.

But the Herald reported in March that work on the $6 billion light rail programme, which Twyford envisaged would be done through a public-private partnership, was making slow progress. The Transport Minister said last month the Government may have to ditch the proposed line to the west, and continue only with plans for light rail to the airport.

Ardern, before the 2017 election, made it clear light rail was one of Labour's flagship policies, and vital to helping solve Auckland's congestion.

Goff also said authorities couldn't do nothing, with the airport precinct booming.

The city was booming, too, he said.