A woman has been slammed online and reported to the MPI for bragging about her grandmother's tactics for deceiving New Zealand Customs.

She posted her story on Facebook - then her story was reposted to Reddit New Zealand as a screen shot from a shocked acquaintance.

The person (identified as "her" by the acquaintance) begins, "So my gran is coming to visit during mooncake season and of course she is bringing in mooncakes with egg yolks - that's the best part! The biosecurity officer asks if her mooncakes have yolks - she says NO."

She goes on to explain how the grandmother got away with the alleged crime, "When they [biosecurity staff] ask to cut into one to check, she provides one, they cut into it, no egg yolk and she's free to go - little knowing that they have cut into the one EXACTLY for that purpose! All the others have yolks." 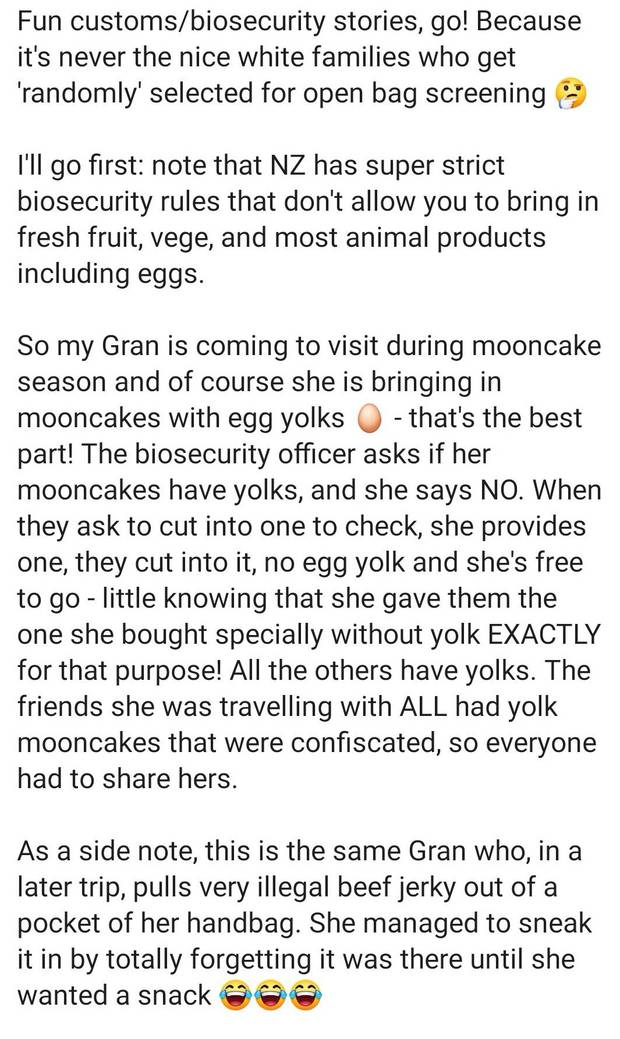 The original poster added that all their grandmothers' friends had yolk mooncakes confiscated, before calling for her friends to share their airport security tales, "Because it's never the nice white families who get selected for 'random' open bag screening". 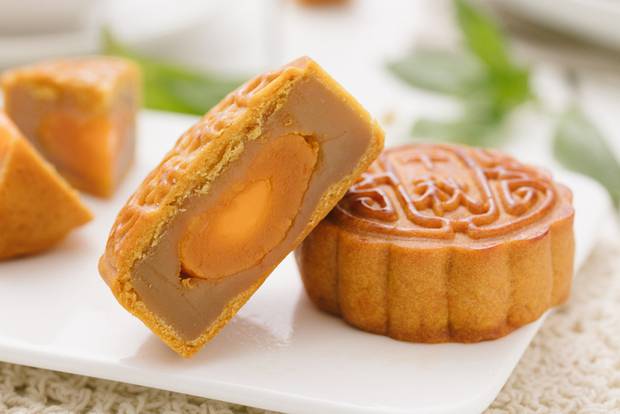 It's mooncake time, but don't break the law over it. Photo / Getty Images

TheZapZupNz captured the general outrage of redditors; "My experiences at the border: not f***ing around with border control to subvert the damned laws."

Kiwi_Bananas added, "My experiences at the border: declaring that I have been on a farm in a foreign country and having the people clean and disinfect my shoes."

Punosauruswrecked chimed in, "They also provide a great tent cleaning service. They found a cane toad in my girlfriend's tent when she came back Australia last year. Poor thing must have jumped in just before she last packed it."

Viper_NZ just got plain old insulted, "My experience at the Australian border: 'Have you been around any farms or farm animals recently?' 'Yes' 'Oh I bet you have..'"

YourLocalMosquito was the good kid in class, "My experience at the border: declaring I had boiled sweets and a wooden puzzle. Because. They. Fit. The. Description. Border control freaking loved it. If they could have given me a gold star and an MVP award they definitely would have. Plus (and this is a big one) the queue is like FOUR PEOPLE long. It's almost worth bringing some sweets in just for that."

londonnah declared a British fruit and nut bar, still sealed in its wrapper, "Turned out it was fine. The woman was surprisingly happy to look it over and give me the go-ahead. I guess they realise most people just go on through without even thinking, or thinking, 'meh, I'll get away with it' when it's not about them at all - it's about biosecurity, clue's in the name."

Thousands and thousands of comments flooded in about the woman's alleged actions.

The_Sydlexic_God, "Sad how some people just have to go to extreme lengths to break the rules... Things like this just end up making it harder for biosecurity to operate, ruining the experience for everyone else. Thumbs down for this person and their grandma.."

Jern92 agreed, "The silly thing is, you can simply buy mooncakes (with or without yolks) in NZ from Asian supermarkets anyway. Not sure why anyone would go to all that trouble to literally smuggle them in."

Loforet explained that some avian adenoviruses are not killed by pasteurisation or the typical baking temperatures for pastry, "so technically there is a small but tangible biosecurity risk."

The person who posted the screenshot shared an update an hour ago; "Update: MPI have received numerous people messaging this to them. So, they're looking into it."

Thaf*** said back, "Haha, I love an own goal via arrogance."