Crossing the border dividing Canterbury from Otago, the Waitaki River, is like a pathway into another world. A region built on the remains of prehistoric creatures from a vanished world. The wondrous Waitaki District has always been proud of its rocks, lustily exemplified by the creamy pure texture of Oamaru Stone that underpins the classic good looks of the historic town’s Victorian Precinct. But before hitting town, I ventured west into the heart of the Waitaki Valley, to delightful Duntroon, with its pending designation as a Global Geopark by UNESCO. As Australasia’s first Geopark, it threads together the spell-binding natural landforms, abundant fossil finds and rich cultural history of the Waitaki Valley, which was under sea when Zealandia drifted away from Gondwana. Seismic forces later thrust the ancient seabed upwards, at the same time that the Southern Alps were formed.

Robert Campbell, the wealthy land-owner and runholder established Duntroon in 1864, naming it in honour of his Scottish birthplace. This cute-as-a-button village is home to the Vanished World Fossil Centre, but before heading there, don’t miss Duntroon’s assorted trove of evocative landmarks. St Martin’s Church is Christmas Card perfect, a lustrous limestone church, funded by the Campbell family. A flock of sheep suitably adorn and tend to the church grounds. On the highway roadside, step inside the 110 year old Duntroon Gaol for an indelible sense of the frigid confines of old-school incarceration. Directly across the road, I met up with Duntroon locals, Mike, Lisa and Jude, who guided me through the rustic charm-factory of Nicol’s Blacksmith, one of the few operating blacksmith shops left in New Zealand.

It’s irresistibly authentic, with the forge fired up on weekends and ironwork courses still held. I was staggered to discover that a distant relative, Wattie Yardley, who migrated to New Zealand in the 1890s from the Orkney Islands, first owned and operated the smithy. It soon became the community hub, as locals swapped stories over horseshoes. 25 million years ago, the land around Duntroon was the ocean floor. Mike Gray led me through the magnificent Vanished World Centre which brings to life the pre-historic wealth of the region. It’s a taster, a scene-setter and a trophy-room that speaks to the geological wonderland that endows the Waitaki District. I marvelled over the displays of prehistoric dolphin skulls, whale and penguin bones, unearthed by local farmers from the limestone.

All manner of discoveries have been found lodged in the region’s famous limestone, which of course was created by broken down ancient marine life. After getting to grips with the barebones geological back-story, Mike and I set off to explore some of the 40 designated sites of significance that comprise the geopark. The karst landscape and its whitestone are at the core of Waitaki’s identity. We called into Takiroa, the rock art site where ancient Maori, travelling through the Waitaki Valley for food-gathering, found shelter in the limestone overhangs, etching images of animals and early European contact into the cliff face. Elephant Rocks is a wonderfully whimsical affair, where towering limestone rocks have been sculpted and eroded by wind and water to form elephant-shaped outcrops. The site was used in the filming of The Lion, The Witch and The Wardrobe.

Nearby, at Anatini, fossilised baleen whale bones have been exposed in the limestone. You might recognise the setting as Aslan’s Camp from Narnia. The wider Awamoko Valley is dubbed the Valley of the Whales in deference to the abundance of fossilised marine life. Another awe-inspiring spectacle is strikingly called Earthquakes, where monstrous slabs of limestone have splintered off the hillside when the land slumped thousands of years ago. It’s still a high rock-fall risk area -so be cautious. But it’s not just limestone that holds court in this geopark, there’s the Moeraki Boulders, Omarama’s pinnacled Clay Cliffs, volcanic cones and mesas rising above the rolling downs. Oamaru itself is built on a long extinct volcano. www.whitestonegeopark.co.nz

After getting my rocks off Waitaki’s multi-layered geological majesty, I headed into town, passing the glittering sweep of neo-classical limestone buildings that anchor the town’s Victorian Precinct. Bathed in the soft glow of the low winter sun, the streetscapes are bewitching, housing a hive of temptations, from the science fiction meats Victoriana fun of Steam Punk, to the artisans, craft brewers and boutiques within the harbourside precinct. There are so many inter-linking strands that weave the Waitaki geopark story together, bridging the past with the present, like how farmers taming the land chanced upon the limestone fossils, while their bountiful produce powered the development of Oamaru’s port. Ancient penguin bones keep being found in the limestone, powerfully connecting with Oamaru’s magnificent colony of little blue penguins, on the foreshore. 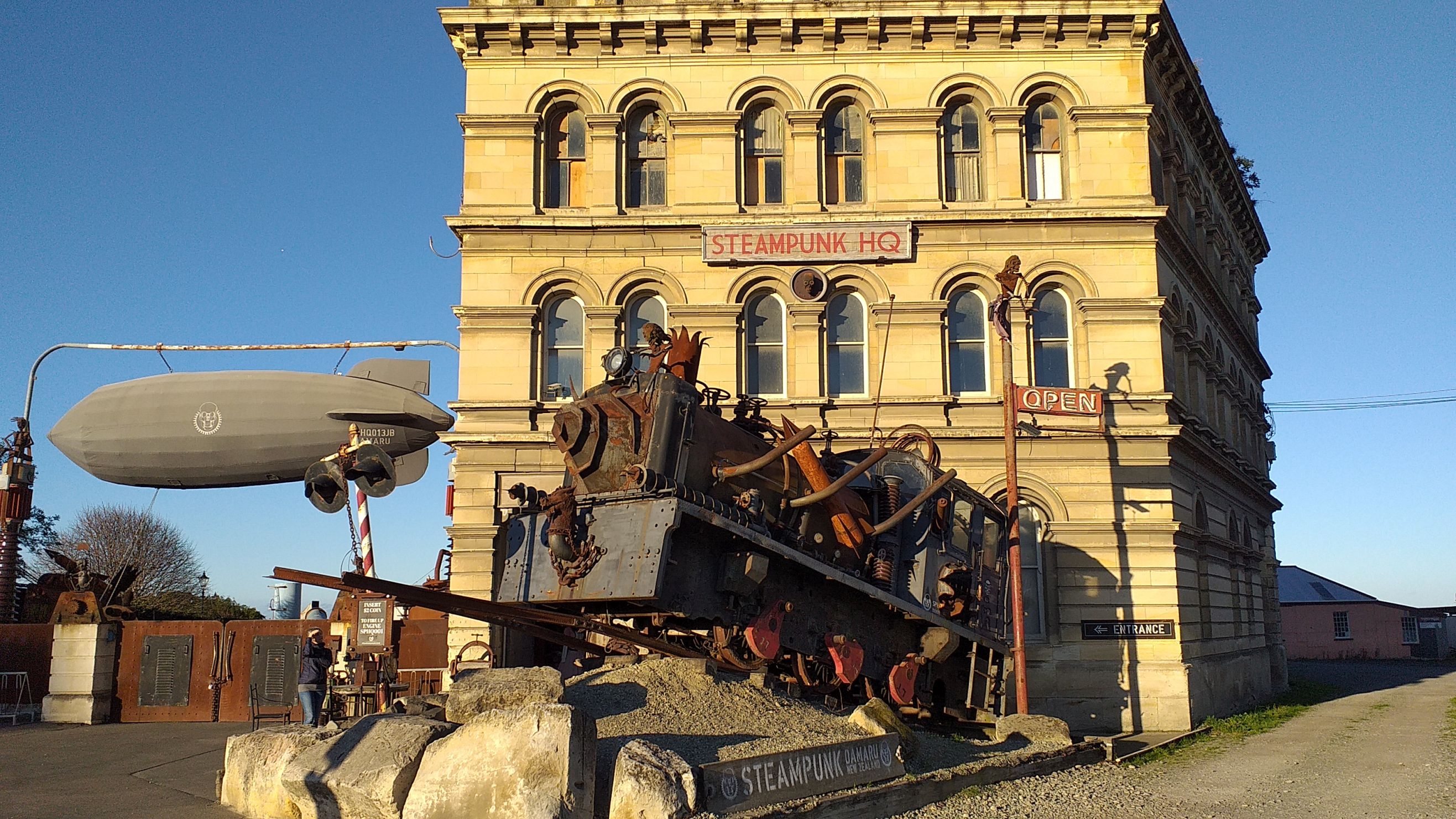 When I first started in radio in Oamaru in 1993, the colony was a fledgling visitor attraction with just thirty breeding pairs. Today, there’s over two hundred breeding pairs, so the nightly penguin parade of the birds returning home to their nest after feeding at sea, is an extravagant and intimate affair. They are so close you can virtually touch them, as they scamper up the rocks like nervous Nigels, navigating their way around bellowing fur seals, to reach their homes. It’s a riveting twilight encounter. As an aside, just adjacent to the penguin colony, the world’s largest colony of Otago Shags have commandeered the historic curving Sumpter Wharf, which played a leading role in the world’s early frozen meat shipments. This shagathon is just another gob-stopping spectacle in wondrous Waitaki.

After freezing your butt ogling scampering penguins on a winter’s night, hot-foot it around to Scott’s Brewery for the roaring fire, great craft beer and pub fare. Then there’s Cucina, fawned over for its degustation dining, with a South American inspired menu. Just north of Oamaru, Riverstone Kitchen sits alongside the homeware emporium of Riverstone Country Giftshops - and the latest addition, Riverstone Castle, which has just opened for reservations. Since returning home to his parents’ farm in 2006, Bevan Smith established the highly decorated Riverstone Kitchen, wrapped in food producing gardens, where his sparkling food ethos is powered by sustainability and hyper-local produce. The menu celebrates the seasons and I had the most perfect winter lunch, munching down a divine wild mushroom risotto for lunch. www.riverstonekitchen.co.nz

Where to stay? Holding court on stately South Hill, just minutes from the Victorian Precinct, Pen-y-bryn Lodge is a dreamy, pinch-yourself hospitality experience. A bastion of hospitable heritage, transport yourself to a self-contained world of aristocratic grandeur. What sings out loud in this gracious palace of calm is the ravishing beauty of the building. Believed to the largest single-storey wooden dwelling in Australasia, the award-winning luxury lodge occupies one of the nation’s time-honoured homesteads, crafted in opulent Victorian style in 1889 for John and Fanny Bulleid. The lodge was aptly named, given “Pen-y-bryn” is Welsh for “top of the hill.” Accorded Category One historic status by Heritage New Zealand, this sprawling wooden dwelling is all the more distinctive given the absence of trees in Oamaru, when British settlers arrived.

Local limestone was the prime building material but the Bulleids fretted about about earthquakes, opting for a more resilient material. The wood frame was sourced from the West Coast while the exquisite interior was cleaved out of English oak, shipped over from Britain. There’s a forest of wood panelling. Rich carpets, soft furnishings and tasteful antique period pieces exude an air of meticulous refinement at every turn. For over a decade, Pen-y-bryn Lodge has been under the command of ‘the Jameses,” who have accentuated its resplendence, with grace, finesse and abiding care. James Glucksman is a prestigious chef who whipped me up the most sublime breakfast offering, after a restful night’s sleep in the spectacular Victoria suite. Among the discerning assortment of offerings, I delighted in the honey, fresh from the property’s beehives, James’ triumphant croissants and his freshly-made Icelandic yoghurt.

With just five guest suites, it’s a peaceful, indulgent and elegant affair as you savour the masterly architecture and furnishings, lolling about the garden, losing yourself in the lofty ocean views, tinkling the ivories on the 1866 baby grand piano, or trying your hand on the competition-size billiards table. History oozes from every pore of Pen-y-bryn; the billiards table was in fact one of three commissioned for the New Zealand Parliament, but they could only accommodate two. The Drawing Room, the Library and Conservatory are all handsome sanctuaries of stately residential splendour. 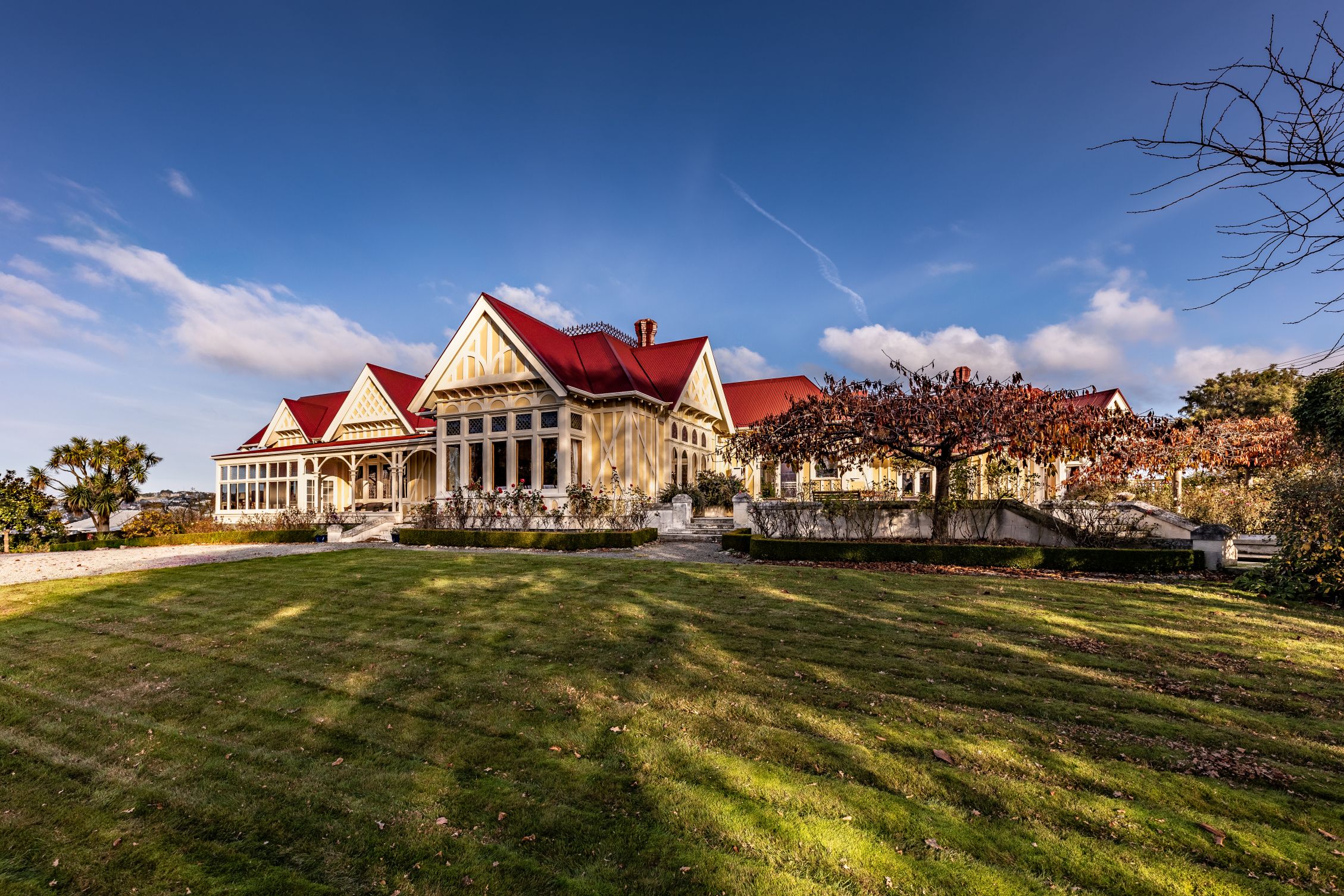 Pen-y-bryn Lodge is currently offering an unprecedented accommodation deal for Kiwis, whereby you can “Name Your Price” for a two night bed and breakfast stay at the property. All reasonable offers will be accepted! Dinner can be added to your stay as an optional extra. Don’t miss this special opportunity to luxuriate in Oamaru’s hallowed hospitality haven. Indulge in an exalted slice of living history. It’s a radiant experience you will deeply cherish. www.penybryn.co.nz

The wonderful Waitaki District bursts with alluring attractions and experiences. For more trip tips and visitor inspiration, head to the official site. www.waitakinz.com