Pangs of envy strike me whenever I’m watching a televised cricket game from Tauranga’s Bay Oval. The camera pans across the elemental brilliance of the landscape, headlined by the imposing grandeur of Mount Maunganui. It had been 25 years between innings, since I had last visited the Mount, a glittery sweep of chic-chi hospitality outlets and alluring boutiques, gazillion dollar apartments, sugar-white sand, crystal-tipped breakers crashing in from the Pacific – all crowned by the landmark Mauao (Mount Maunganui.) I dabbled in the magic of the Mount with Ian Holroyd, my driver/guide from Mount Classics Tours. www.mctours.co.nz

This seasoned pro offers a supreme sightseeing introduction to Tauranga’s finest features, studded with anecdotes that only an in-the-know local can impart. With a wealth of experience tending to cruise ship passengers seeking shore excursions across Australasia, he’ll offer you tailormade sightseeing and touring options. Ian regaled me with some of head-spinning insights about the prime real estate in the Mount, the multi-million dollar price tags of some apartments and what A-listers live where. It’s like the Noosa of New Zealand. We took a wander around the base of the Mount, reputed to be New Zealand’s most popular walk. The 45 minute circular base track walk lassoes around this extinct volcano, from the operatic ocean elements to the sheltered waters of Pilot Bay.

On a sun-drenched August morning, the well-tended pathways were heaving with perky and eager strollers at 9am, as seals snoozed on the basalt rocks, constantly washed by lashing waves. Evidence of trenches and ancient shell middens is a ready reminder that the mountain was once adorned by a Maori pa site. Ancient pohutukawa trees with their tentacular root systems cling manfully to the slopes, providing trusty shade. I made a mental note to return in December to savour the spectacle of the vast crimson blaze that torches the mountain – and to climb to the summit. Fancy a soak in hot ocean water? Wind down with a dip at the Mount Hot Pools, based at the foot of Mauao. Ian then whisked me across Tauranga Harbour Bridge, to one of New Zealand’s oldest heritage buildings. 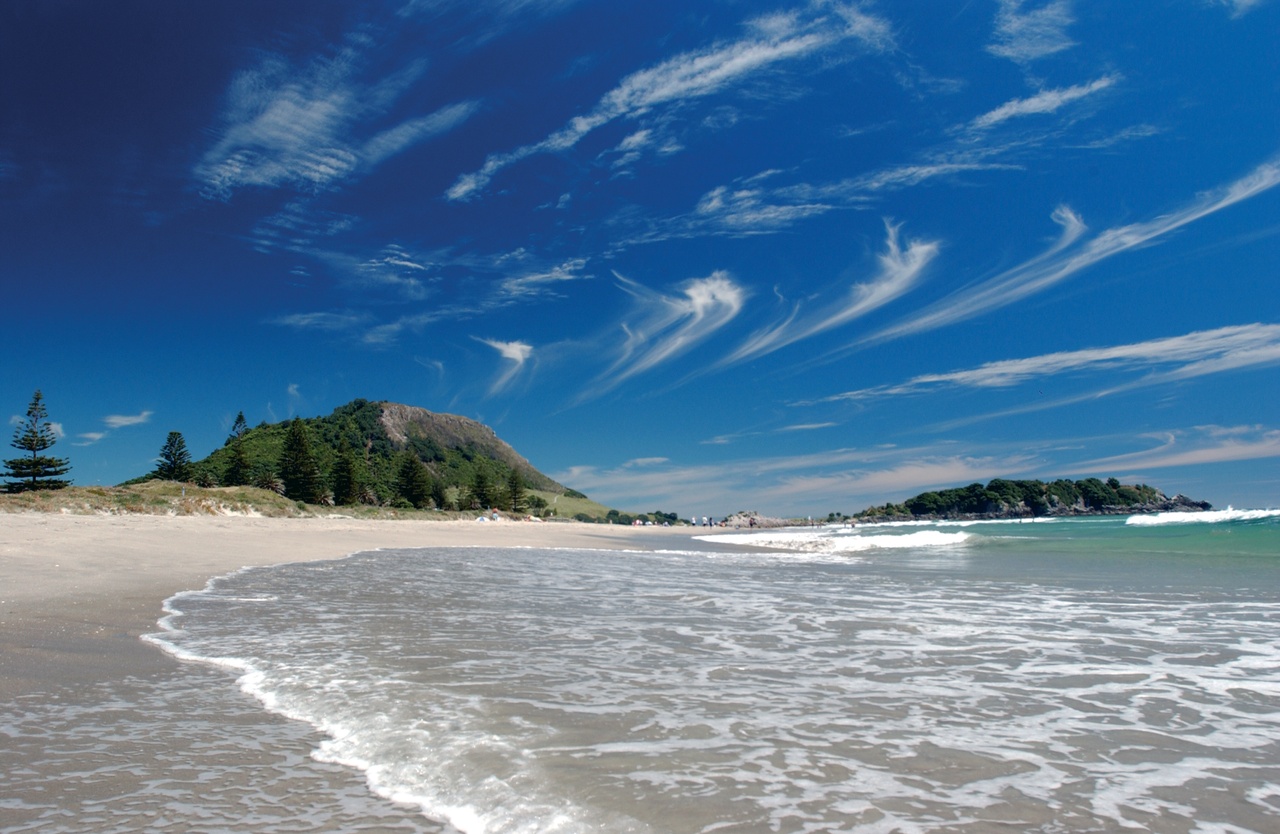 Completed in 1847, the Elms Mission House is one of our finest Georgian houses, built for the Reverend Brown, who came to New Zealand in 1829 as a missionary. As he set about establishing his mission station, inter-tribal warfare on the peninsula saw hundreds massacred at the hands of Titore and Hone Heke’s war expedition. Nowadays, the impeccably tended lawns and tranquil gardens create a storied urban oasis, overlooking what was the original Tauranga shoreline prior to land reclamation, on the northern tip of Te Papa peninsula. Rev. Brown and his wife created what is now one of the oldest New Zealand European gardens south of the Bay of Islands. The Oak Tree at the corner of the north lawn grew from an acorn brought from England by Rev. Brown in 1829. The entire setting bears an uncanny resemblance to the Treaty House and grounds at Waitangi. Kauri logs were rafted down from the Coromandel to be pit sawn on site. The mission station played a central role in the battle of Gate Pa, when the land wars broke out in the 1860s.

Imperial troops took over the Mission Station buildings as they waged war. The great Maori victory was followed by the battle of Te Ranga a month later, reversing the situation, with the British troops victorious. Ian took me to the battle site of Gate Pa, 5km south of the Mission Station site, where history oozes from the earth, while eight carved pillars (pou) memorialise the leaders on both sides. The pa itself was designed as a trap to draw in the British troops. After the wars were over, the British army used the fortifications at Gate Pa as a model for trenching, with many military scholars believing Gate Pa gave rise to ‘trench warfare’ in the First World War.

From there, we headed to the Historic Village, a head-turning trove of original and replica buildings from early Tauranga, swaddled in gorgeous gardens and natural bush surrounds. Top stops include The Toy Shed, Turner Gallery, Selvedge Boutique and the wildly popular Whipped Bakery, where the astronomic range of intricately decorated doughnuts makes Krispy Crème look decidedly vanilla.  From the astronomic to the gastronomic, an essential Tauranga experience is to dine at Izakai, at the Bayfair Shopping Centre. They’ve swiftly fostered a red-hot reputation among foodies for their Māori and Japanese fusion cuisine, steeped in the values of manaakitanga and sustainability. It’s the talk of Tauranga – and rightly so. I noshed on a variety share plates including Creamed Paua and Prawn Dumplings with cauliflower puree, crispy shallot, spring onion and chilli. www.izakai.co.nz

No visit to Tauranga is complete without a fresh feed from Bobby’s Fresh Fish Market. This city institution hums with trade from early morning to sundown. I’ve never seen so many people patiently lined up for their fill of freshly cooked snapper, in beef fat not oil, at 10am. The shop edges the fishing wharf where the fresh produce is brought ashore. How’s that for a zero kilometre meal. The in-store selection spans mussels, kina, oysters, prawns, seafood kebabs and 10 varieties of fresh fish, but you can’t beat the snapper. Nothing beats ordering your meal and devouring it, right alongside the fishing boat that delivered most of the day’s catch, while catching a sea breeze. Charting up over four decades of fans, do not miss this local legend.

I sought to burn off some of the fried indulgence by hitting the pedals on an e-bike. Daytrippers is a superb Bay of Plenty cycle tour operator, specialising in offering guided cycle tours on their latest Giant Fathom 3 electric bikes. You can choose a set tour, create a custom tour or simply hire a bike off them. There’s some great off-road city trails, which include ripping around the port and waterfront to Sulphur Point, biking over the Matapihi Rail Bridge, and a requisite rendezvous with the Hairy McLary and Friends Sculpture park, just off The Strand, that continually wows the crowds. www.daytrippers.co.nz

I joined Waimarino Kayak Tours who offer one of New Zealand’s most breath-taking kayak adventures. At twilight we ventured out to the grassy banks of tranquil Lake McLaren in McLaren Falls Park. We enjoyed some mulled wine sundowners and a generous cheese platter before our kayak tour guide led us onto the super-shallow man-made lake as the sun slumped behind the rolling hills. As darkness descended, we gently paddled our kayaks up the lake for 45 minutes to reach the most enchanting canyon, festooned in glow-worms.  It is magical, serene and undeniably bewitching. A twinkling canyon wonderland of glow-worms. Accentuating the ambience, the clear night sky above, glittered with stars, while a terrifically bright full moon cast the lake in a celestial glow, as we paddled our way back to McLaren Falls Park. It’s a wondrous experience and the friendly, professional Waimarino team will kit you out in all the safety gear. www.waimarino.com Back in Tauranga, I also immersed myself in the essential Bay vibe, while luxuriating in the boutique comforts of Trinity Wharf hotel. Designed to accentuate the watery embrace of the Tauranga harbour, family owned Trinity Wharf is a sublime 123 room waterfront hotel and conference facility, just a stone’s throw from the CBD. It’s the pitch perfect bolt hole whether you’re into town for work or play, with a stirring infinity edge pool. If you fancy the splendour of a watery outlook, I highly recommend Room 126, where the vista made me think I was actually on a luxury boutique cruise ship, complete with wraparound deck. Sunrise is pure theatre – the suite lets in so much light you’d think the sun has risen in your room. The harbour vista never stopped massaging my eyes. The award-winning Halo restaurant will pamper you through the day, with seasonal cuisine and a salivating beverage menu. Chic, stylish and perfectly poised. Trinity Wharf is a class act. www.trinitywharf.co.nz

Home to an abundance of kiwifruit and avocado orchards, arguably the best beaches in New Zealand, a rich Maori heritage, and swathed by warm ocean waters, Bay of Plenty has plenty of experiential options for every traveller. Make your first port of call the region’s official website. www.bayofplentynz.com