Take a look at a New Zealand map and Banks Peninsula is a curious geographic feature, a big bulbous blob of land jutting off the coast of Canterbury, like a giant corrugated thumb. Formed from the remnants of two ancient volcanoes, Banks Peninsula was previously an island, although roughly 20,000 years ago, erosion from the Southern Alps in the form of glacial rocks and pebbles washing down the rivers created the Canterbury Plains and joined Banks Peninsula with the mainland. The tourist honey-pot of Akaroa looms large as the glittery showpiece. From Christchurch, it’s just over an hour’s drive away, although there’s a plethora of enticements along the way. An obligatory first-stop on SH75 is at Little River, where the creative locals spill forth with their works.

Visit the Little River Gallery for a mixture of eclectic and wonderful art for sale, showcasing the verve of local and New Zealand craftspeople. The former railway station also houses a trove of craft worth a browse. Also lording over the roadside, one of the quirkiest accommodation options in New Zealand, Silostay. Yes, you can sleep in a converted grain silo with intriguing little details and a comfy bed. This Little River landmark is insta-gold. From Little River, the flat drive from Christchurch suddenly switches to dramatically undulating terrain, as you wend your way through the tucks and folds of the crumpled hills all the way to Akaroa. 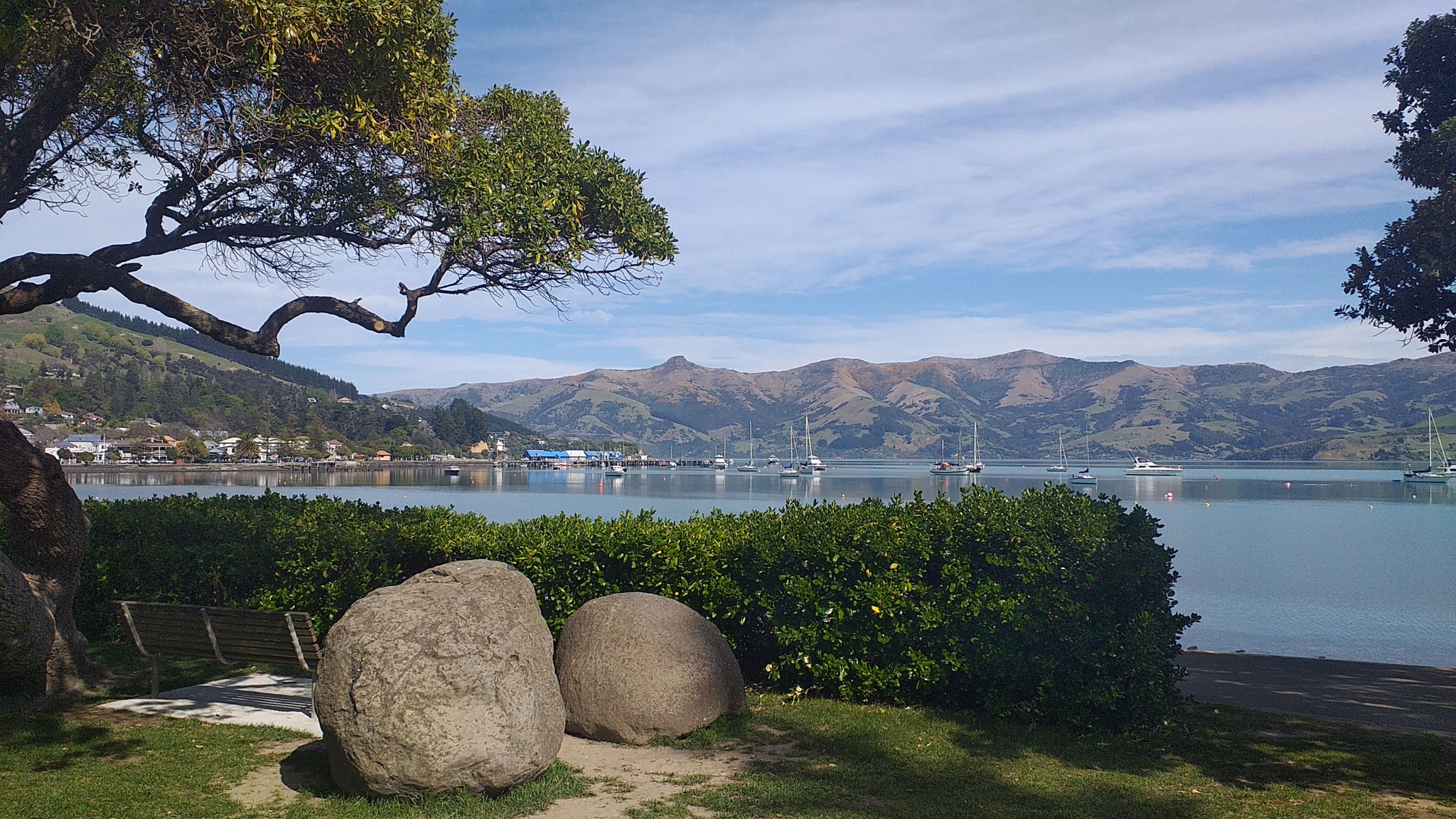 It’s a bucolically breath-taking drive, which I lapped up under a Tiffany-blue morning sky, as the luminous greens of spring cast the lush countryside under its spell. After a cursory stop by the Hilltop Tavern for that fabled panoramic view across Akaroa Harbour, I rolled down into Barry’s Bay where fromage fans are handsomely rewarded by popping into Barry’s Bay Cheese for tours and tastings. When this factory first produced its cheddar in 1895, it was just one of nine small, family-owned dairy cooperatives dotted around Banks Peninsula. One by one, they fell by the wayside apart from this sole survivor and last outpost of traditional hand-crafted cheese making on the Peninsula.

From there, it’s a very short hop to a striking sliver of land with a storied past that cuts through the harbour like a knife, Ōnawe Peninsula. Jutting out into the harbour like an elongated pyramid, it’s connected to the mainland only by a thin ridge reminiscent of a dragon’s spiny backbone. Geologically theatrical with a riot of patterned rock colours, it’s a volcanic plug inside Akaroa Harbour.

I took the opportunity to strike out on the one hour return walk. Be sure to time your walk for low or mid tide, to avoid getting wet feet before heading up the slope to the summit. 190 years ago, it was the palisaded site of a Ngāi Tahu pā which was captured by Te Rauparaha, chief of the Ngāti Toa in 1832. Estimates on the scale of death vary widely, but up to 1200 people were slaughtered by Te Rauparaha’s warriors in a merciless massacre. Many of the slain iwi had taken refuge after Kaiapoi pā had been previously laid to waste a year earlier. The young and the strong were taken as slaves by the northern invaders, while the rest were slain on the flax flat at Barry’s Bay, feasting on their flesh. Needless to say, the land is sacred to Ngāi Tahu and you’re requested not to eat when you visit this historic site. It’s a place so silent, a shout hangs in the air.

Despite its gruesome backstory, the scenery is blow-your-socks-off gorgeous.  After taking in that heady dose of nature and history, it’s just a 20 minute drive to the vacation haven of Akaroa. In this charismatic place of old walnut trees, evocative colonial cottages and white picket fences, there’s no shortage of layered history to unpeel. But it’s Akaroa’s unmistakeable French influence that accentuates the seduction. Order up a Café au Lait and soak it up. In 1838, French whaling captain Jean-Francois Langlois made a down payment on 12,150 hectares of Banks Peninsula land, agreed to with 12 Ngai Tahu chiefs. Back in France he secured support from businessmen and the government for the idea of a settlement and the starting point for French colonisation of the South Island.

In 1840, 64 French and German settlers arrived at Akaroa after enduring many months at sea, only to see the Union Jack flying on Green Point. The British had arrived seven days earlier, under the watchful eye of HMS Britomart, after annexing the entire country under the Treaty of Waitangi. Despite their profound disappointment, the French settlers were allowed to stay on in Akaroa to live under British rule. Many street names pay homage to those early French settlers like Rue Lavaud ( the main street), named after the diplomatic captain of L’Aube, Charles Lavaud.  Langlois’ cottage takes pride of place on the main street, now incorporated into Akaroa Museum, which is well worth a look. Insatiably popular and utterly mesmerising is a visit to The Giant’s House.

Art and garden fans are equally rewarded when encountering this 24-years-and-counting labour of love, conceived and crafted by Josie Martin. Located at 68 Rue Balguerie, “The Giant’s House” was named by a young girl looking up at it from the valley below, remarking it was so huge that it must be the house o a Giant. Built in 1880 by Akaroa’s first BNZ Bank Manager, the manor house is a timbered delight, brimming with totara and kauri, plus a magnificent mahogany staircase imported from France.  Fully restored with Jsoie breathing new life into it, there was no developed garden when she purchased the property in the late 1990s. When she began digging the dirt to design her garden, she unearthed shards of lovely old china, which she deployed when trying her hand at mosaicking the front steps of the house.

To cut a long story short, the accomplished artists set about crafting a lush terraced garden, lavishly festooned with mosaic sculptures and installations. Built with reinforcing steel and concrete the sculptures are then clad in colourful mosaics, sourced from tiles, broken china, glass and mirrors. The works are wondrous, whimsical, a seriously flamboyant and playful celebration of life. A grand fantasia. As an avid traveller, actively involved in the fine arts for 40 years, Josie is constantly drawing on her global adventures for inspiration, as her garden continues to evolve, with the mosaiced theatre of art taking centre-stage in the parade of splendour. A runaway family hit, when I felt clapped eyes on her wonderland, it struck me as Gaudi meets Disney. She calls it “the happiest garden on Earth.” Open daily for tours, you can also stay overnight in this surreal, masterly and escapist destination. www.thegiantshouse.co.nz 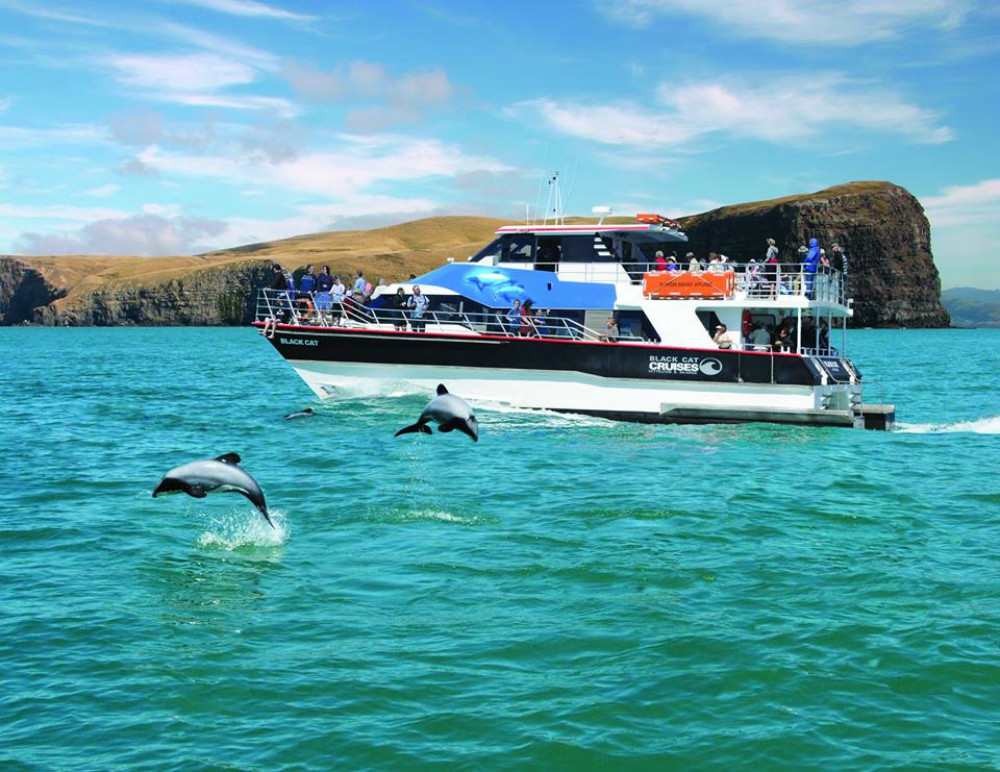 Amid the slew of water-based options Akaroa offers, you’ll definitely want to hop aboard Black Cat Cruises for their 2 hour log nature cruise, on-board their luxury catamaran. Fully narrated, it’s an magnificently scenic cruise, blending the abundance of marine wildlife encounters with the evocative history of Akaroa and the staggering rock formations that deeply carve the coastline and headland at the harbour entrance. You’ll cruise past Onuku Marae, where the Treaty of Waitangi was signed for the first time in the South Island in May, 1840. Cathedral Cave is an exceptional example of a volcanic cave, 100 metres high, and layered with self-explanatory evidence of different volcanic eruptions.

The cave was formed by a massive explosion of trapped gas that blew out from the encased lava, laying bare the lines and layers of each eruption throughout the ages. Pock-marked with blowholes, the ocean breathes in and out with a thunderous roar. Rest assured, the crater you are floating in is that on an extinct volcano, which last blew its top 6 million years ago. If I had to pick my favourite New Zealand tree, the Nikau Palm gets my vote, which is of course New Zealand’s only native palm tree. In a hanging valley rising up from the volcanic cliffs of Akaroa Harbour, Nikau Palm Gully marks the southernmost point where these fabulously sculptured palm trees grow. Nikau translates as no coconut. If you want a closer encounter with this gully, there’s a four hour return walking track from Akaroa.

Nudging out of the harbour into the open sea, after admiring the gnarly Heads, the wildlife was ever-present. New Zealand Fur Seals sunbathed and bellowed from rocky platforms and sea stacks; little blue penguins scurried about in the water (which at first glimpse you may mistake for ducks); seabirds wheeled about in the breeze scanning the water for prey while a pod of frisky Hector’s dolphins freely frolicked in the wake of the boat, playing to the cameras like seasoned performers. 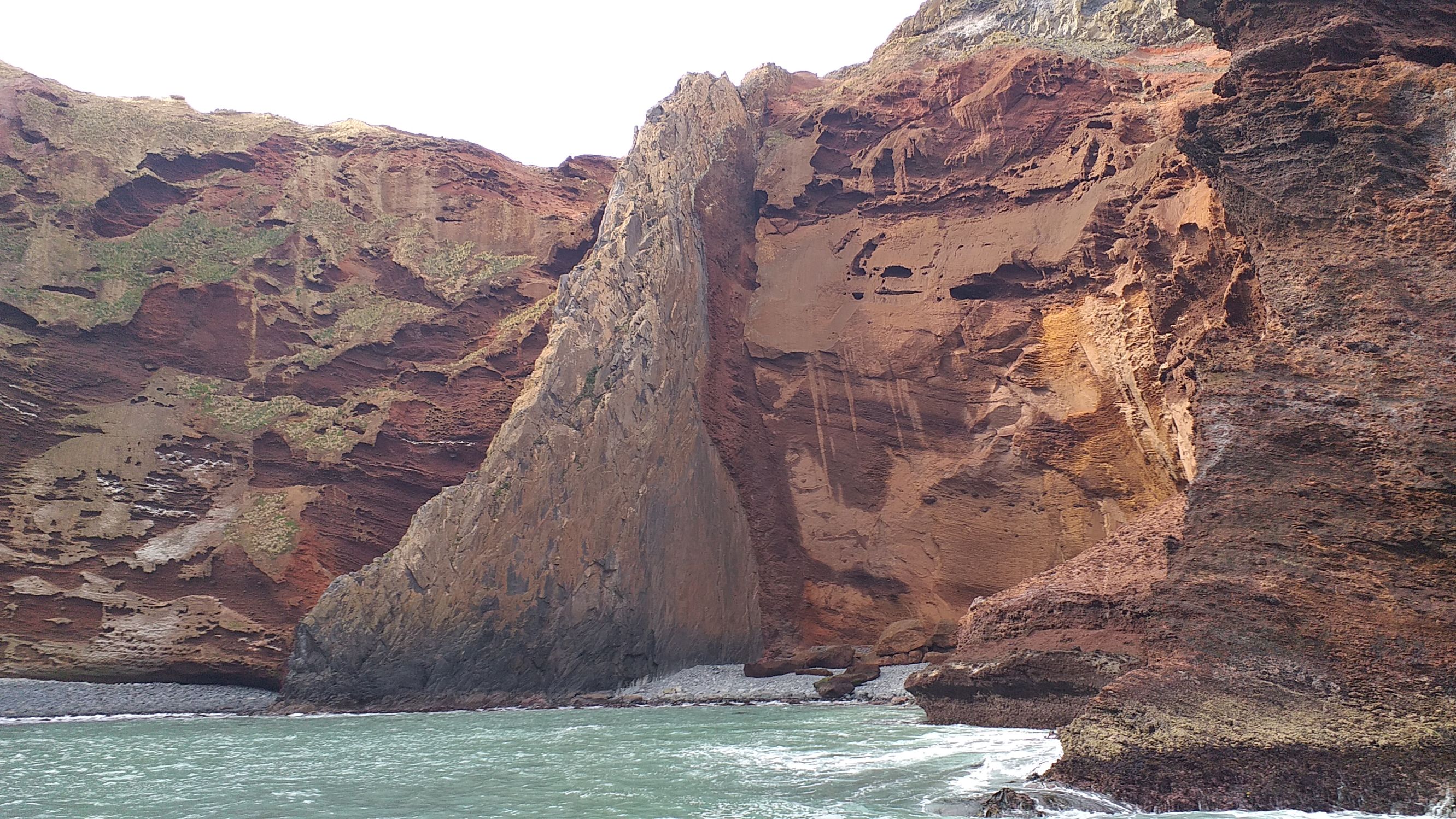 Before turning for home, we delved into the most spectacular rock formation of all, Scenery Nook. This volcanic amphitheatre is considered by geologists as one of the most dramatic sea cliffs in the world, a volcanic vent, throwing up a riot of fiery red colours in the basalt, lava and volcanic ash. There’s a sense of the otherworldly, of danger and the unfamiliar, in this compelling Martian-hued amphitheatre. It’s an arresting crescendo to a captivating cruise on Akaroa Harbour with Black Cat Cruises. www.blackcat.co.nz

Booking.com offers a wealth of accommodation options in Akaroa, from picture-postcard cottages to swanky boutique hotels. Proving the Kiwi appetite for travel remains, there was a significant increase in the amount of domestic travel Kiwis undertook with 82% of the total distance travelled during winter being domestic according to recent research from Booking.com, compared to only 16% during the same period of 2019. Score your slice of Akaroa paradise at www.booking.com