It’s the cradle within the cradle of New Zealand tourism, the Buried Village of Te Wairoa. If the 1886 Tarawera eruption was our version of Vesuvius, Te Wairoa is surely our homegrown mini-Pompeii. As the birthplace of New Zealand tourism, prior to 1886, moneyed Europeans flocked to these parts, to see, photograph, paint, sketch and bathe in the mineral waters of the legendary Pink and White Terraces. Te Wairoa was the staging post, from where they’d board a whaleboat, in their crinoline dresses and bowler hats, to cross Lake Tarawera to reach those tantalising terraces on Lake Rotomahana. At the time of the eruption, Te Wairoa was humming, home to 150 residents, two hotels, the Hinemihi meeting house, a church and school. It was the Tuhourangi people, a sub-tribe of Te Arawa, who owned most of the land in the area, astutely cashing in big-time on the booming tourist trade. 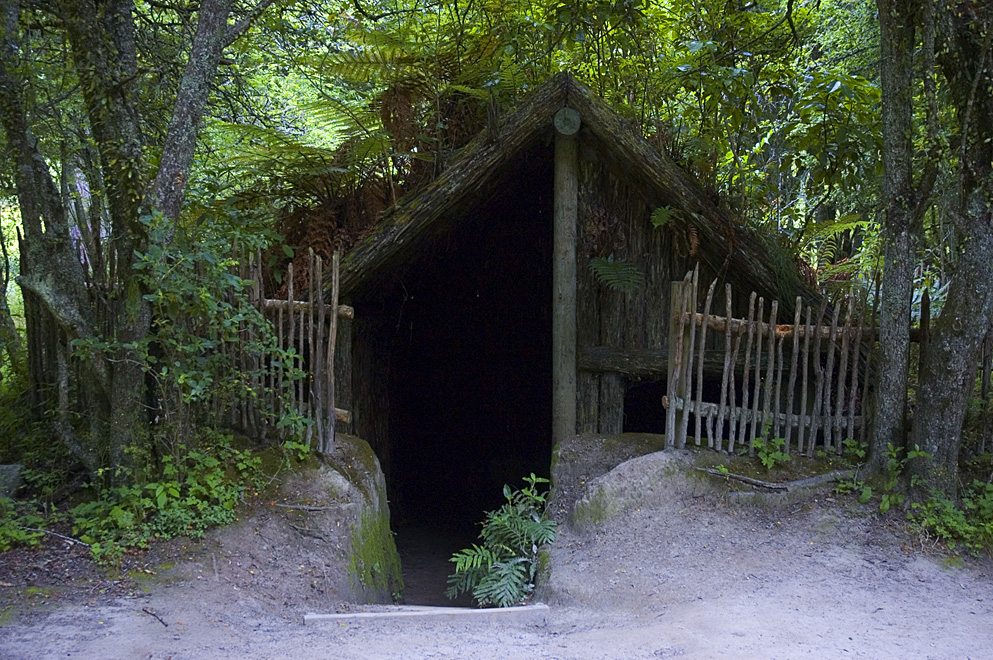 All bases were covered - cultural performances, carriage across the lake, food-stops, photographers, paintings, you name it. When Tarawera erupted, over 120 people were wiped out, while Te Wairoa was decimated. Today, this once bustling village is now a tranquil setting of park-like grounds with carefully excavated remains, like the stone storehouse, Māori waka and blacksmith’s workshop. The scars are partly concealed by the regenerated bush, but the relics and the surrounding landscape do give you an unmistakeable sense of just how much mud and ash fell on the night of 10 June 1886. There is still much that could be excavated. I started my exploratory at the phenomenal Te Wairoa Museum, a repository for many of the objects excavated from the site, particularly household crockery and furniture. It’s an emotionally potent museum, sharply reinforcing the human dimension of the natural disaster.

For many decades a sewing machine could be spotted high up in the trees, (from the eruption.) Eventually the tree had to be felled due to rot, but that section of the tree and the sewing machine can now be seen in the museum. There’s a riveting display that showcases the multiple reports of a Phantom Canoe, a ghostly waka, in the days leading up to the eruption, as witnessed by Guide Sophia and her tour parties on the lake. (Sophia survived the disaster and became a pioneer guide at Whakarewarewa.) I also learnt about the village tohunga, Tūhoto Ariki, who interpreted the sightings of this apparition as a warning of impending doom. Roughly 100 years old, most villagers ignored his prophesising, although several months earlier, the warrior prophet Te Kooti stayed at Te Wairoa and urged his host to clear out of the place, fearing looming destruction. Spooky! When Tarawera erupted, many survivors actually blamed Tūhoto for unleashing such misfortune, and with his hut overwhelmed in a mountain of ash and mud, he was initially left entombed in his whare to avoid further disasters. 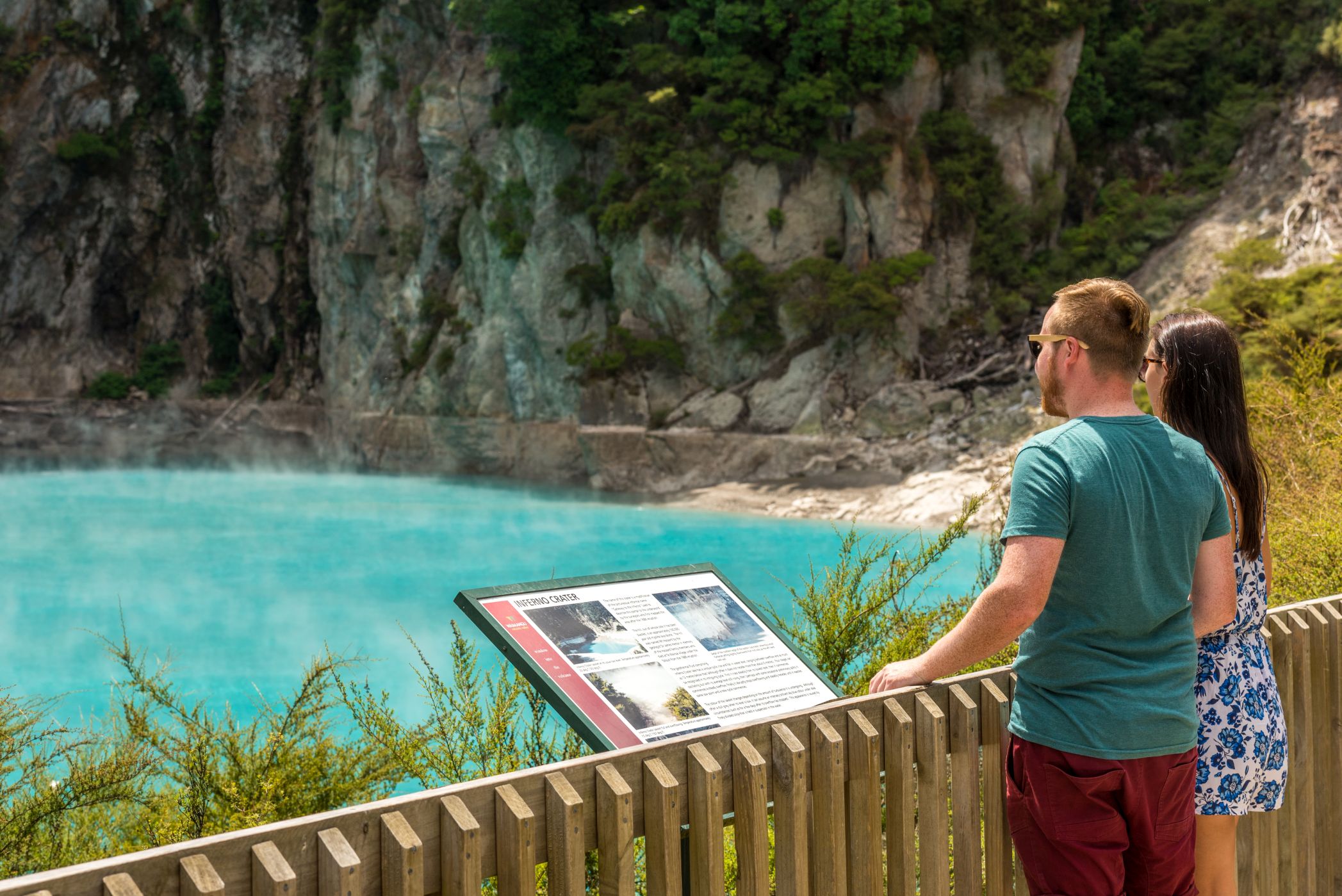 However, four days later, rescuers dug him out, finding him still alive after 104 hours! The fact that he had survived so long, enhanced the view that he was a man of great powers. He was taken to Rotorua Sanitorium Hospital and died several weeks later. I paused at the site of his whare as I walked the grounds with Dave McGarth, who is part of the fourth generation of the Smith family, who have run the venture for 90 years. Reg and Vi Smith bought the land and a little cottage on the site in 1931 and began the task of excavating, along with Vi running the tearooms. Another highlight is seeing the remains of the Rotomahana Hotel, where many of those Victorian travellers stayed. My guide, Theresa, Dave and I chatted about the phantom canoe legend and Theresa mentioned that back in the day, local Māori were buried upright in a waka on Lake Tarawera. So was the so-called

apparition a burial waka that had been dislodged, was it a ghost ship, or were Sophia and the tour group simply hallucinating on volcanic gases?

Be sure to take the gorgeous walk flanking the Te Wairoa Stream, flowing from Green Lake and bursting with Rainbow Trout. It plunges over the Waitoharuru Cliffs forming a spectacular cascade, Wairere Falls - another unmissable highlight when visiting the storied Buried Village. Just before checking into my roost for the night, I paused at the lookout on Tarawera Road as the enigmatic mountain brooded on the horizon, across the glistening water. For a spot of luxury glamping on the western banks of Lake Tarawera, you cannot beat a cosy night at the evocative Jack’s Hut. This heart-stealing hillside glamping spot is located on the Spencer Lodge Estate and you’ll be snug as a bug in this 1930s’ South Island shepherd’s hut, with power, electric fire, a separate toilet and kitchen facilities, plus fabulous barbeque deck. It’s been in the Mackay family’s possession since it was built by Jack MacKay in Montana, West Otago and became known as the “honeymoon hut”, given it was where he welcomed his first wife. David and Angela Mackay relocated this time-honoured hut 1500kms to its current Tarawera site three years ago. There’s a trove of original items adorning the hut, like the stock from Jack’s original gun that he used to shoot all the rabbits to pay for his first car. The wooden cutlery tray is also an original piece. This is a wonderfully secluded spot, backed by a native ponga forest, with stirring views of the lake and mountain – and the birdsong is ebullient. It feels like a magical holiday bolt-hole. You can sit on the swing seat with a book and glass of wine, fire up the outdoor woodfired hot tub, toast some marshmallows and lose yourself in the star-flecked night sky. It’s an easy walk down to Stoney Point Beach for a bracing dip, or take the kayak for a ride. Blissed-out in Tarawera. https://taraweraholidayhome.nz/

After a solid night’s sleep, I awoke to a sparkling winter’s morning before scooting round to Tarawera Landing, for a tremendous cruise on the lake with Totally Tarawera. It’s the same site from where the whaleboats would leave from carrying visitors to the Terraces. Karen Walmsley, grand-daughter of Guide Sophia, along with her husband Dave, established the eco-tourism business, Totally Tarawera, 16 years ago. Steeped in the spirit of manaakitanga, the operator offers a variety of salivating experiences, from guided cruises and water taxi services to divine glamping sites. Over the course of several hours on-board their Discovery tour, Dave imparted all manner of insights on the rich history and drama of the lake, while also zipping us to some of its finest gems. The star specimen is Te Rata/ Hot Water Beach, where we savoured the amazing geothermal area along the edge of the lake.

The sand is warm enough for a fisherman to cook freshly caught trout! It’s wildly popular with summer campers and Dave remarked that it’s not unusual to see a casserole or lamb shanks sitting in the hot stream, cooking away. Boarding the boat again, we purred along the bush-cloaked lake edge to the Natural Bush Hot Pool. It’s like an enchanting secret garden, where you can lie back in the crystal-clear tempered waters, wrapped in the fern-rich finery of the native forest. You’ll notice enormous endeavours are underway to liberate much of the land and forest around Tarawera from invasive species. Wilding pines and wattle trees are being poisoned to get rid of them. The wattles took root from scattered seeds in the saddle bags of the old horse and carts, that used to ply the area. There’s also a major wallaby population around Tarawera. Definitely take a tour with Totally Tarawera. www.totallytarawera.com 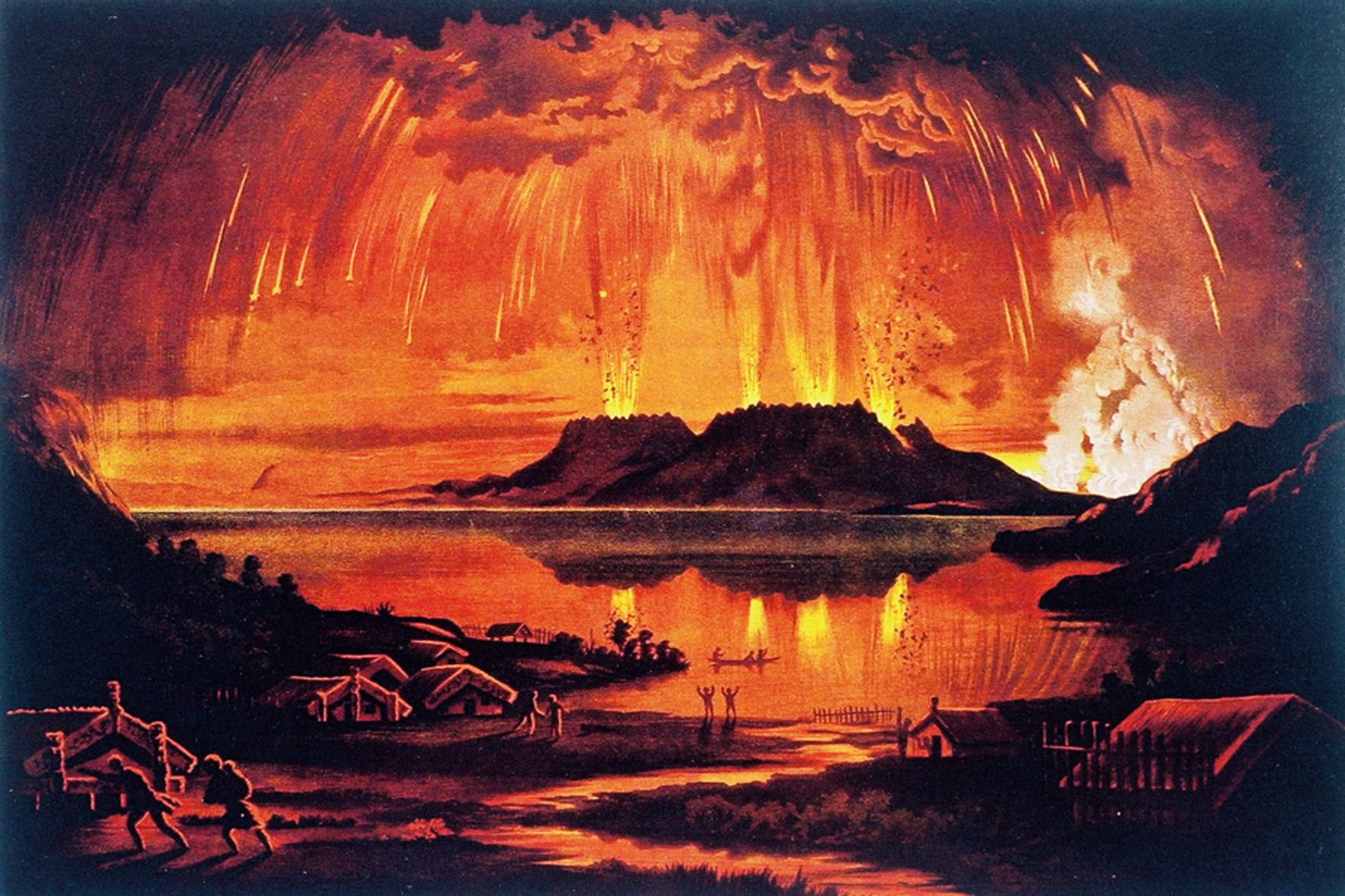 Central to the legacy of the disastrous Tarawera eruption is the remarkable Waimangu Volcanic Valley. As Mt. Tarawera split in two and exploded Lake Rotomahana to 20 times its previous size, it also opened the earth along a 17km-long rift. The seven craters that you see today in Waimangu

Valley today were violently created in the process. In a short space of time, the hot springs at Waimangu were established within the craters, making the reserve the world’s youngest geothermal eco-system. Previously, the peaceful valley was home to just rolling scrub-covered hills. Waimangu’s geothermal features are absolutely enthralling, like the largest hot spring in the world, Frying Pan Lake, and the azure jewelled spectacle of Inferno Crater. You could easily spend all day exploring its grippingly active and dramatic features. Be sure to add on a 45 minute guided cruise on Lake Rotomahana. You can’t beat a good fumerole and Fumerole Bay’s intense steam vents, billowing like factory chimneys is an arresting sight. It’s also quite the novelty to be cruising over the exact site of the Pink and White Terraces. A decade ago, small remnants of both terraces were discovered, 60 metres below the water surface. www.waimangu.co.nz

Finally, an unbeatable way to get an incisive sense of nature’s mind-blowing majesty and monstrous power is to take a chopper ride with Volcanic Air to the top of Mt. Tarawera. En-route, you’ll fly over the bedazzling beauty of the Waimangu Valley before landing on the summit of the sacred peak. In places, the mountain looks wildly twisted, with a crust of rich volcanic red material. The wider view vividly demonstrates how the earth was blown open or unzipped, with colossal valley-like fissures running for 17kms. Yes, mother nature is always in charge. www.volcanicair.co.nz 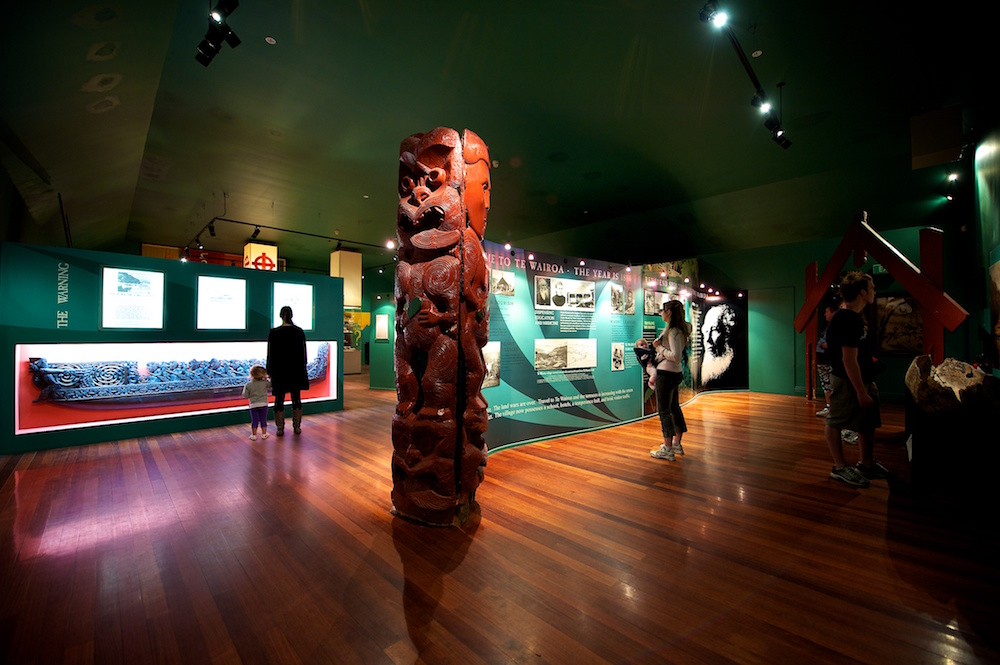 For a history-dripping holiday, tinged with tragedy and unrivalled natural drama, Tarawera makes for an unforgettable getaway. www.rotoruanz.com

I zipped my way around Rotorua with a superb rental vehicle from Thrifty Car Rental. Offering excellent coverage across New Zealand, drive away with Thrifty’s new Risk-free Package which delivers maximum peace of mind on your journey. Priced form just $89 a day, it includes unlimited kms, zero excess, free airport fee and zero credit card fees. My pick-up and drop-off was super swift and stress-free. For full details on Thrifty’s Risk-free Package, head to https://www.thrifty.co.nz