No matter how often you visit the Capital, one of life’s great truths is that Wellington is a gorge-fest. An enchantingly compact city crammed with culture, character, colour and yes - cafes. On my latest swing through this whirring web of a city, I struck out on a suburban safari, wriggling under the skin of some of Wellington’s most distinctive neighbourhoods. I started my ‘hood hopping in the inner-city enclave of Thorndon, backing the city’s forest of skyscrapers. Huddled between the hills and the harbour, Thorndon can feel like a page from the past, where history slaps you in the face at every turn. I popped into the National Library in Molesworth St to peruse He Tohu, a permanent exhibition of the three iconic constitutional documents that shaped our nation. The exhibition adjoins the Document Room, where you can eyeball the original Treaty of Waitangi, the Declaration of Independence of the United Tribes and the Women’s Suffrage Petition.

The room is like a timbered cocoon, its design cue inspired by the shape of a waka huia or treasure container. Across in Mulgrave St, another warm wooden heart-stealer beckons, Old St Paul’s. This postcard-perfect Gothic Revival church was built in 1866, constructed entirely out of native timber and embellished with stupendous stained glass windows. Still a consecrated Church though no longer a parish, entry is by donation to this well-used venue. Across the road, I called into The Thistle Inn for lunch, a true colonial survivor and proudly one of the nation’s oldest taverns. Established in 1840, the first Thistle was a single-storey, gabled building which burnt down in 1866, swiftly replaced by the two-storey wooden pub you see today. 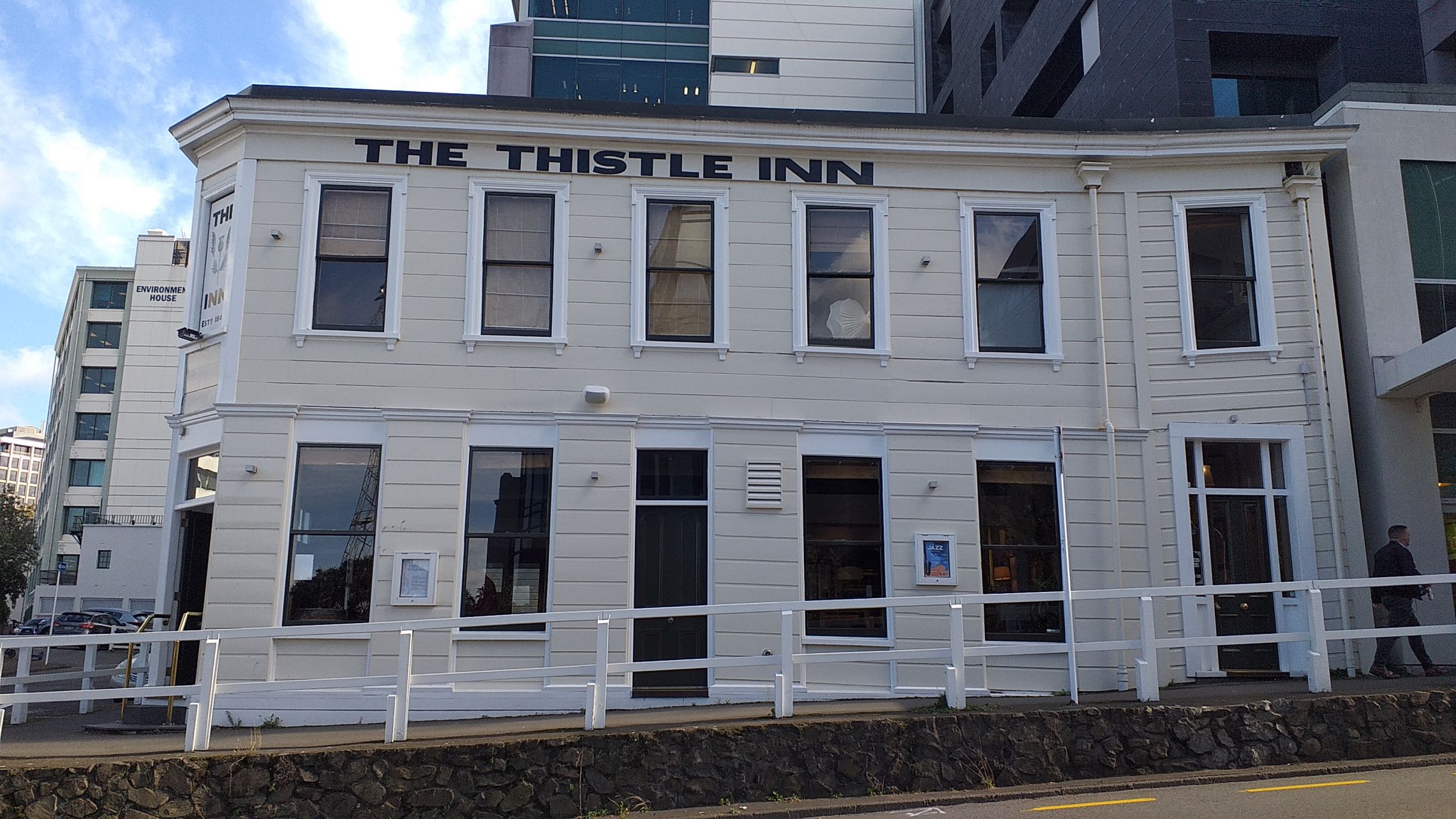 Prior to the 1876 reclamation, the sea would lap at the pub’s front door and people walked, rowed or paddled here to slake their thirst. It is claimed that Te Rauparaha who was partial to rum, would beach his waka on the foreshore to whet his whistle in the Thistle. Another historic regular was Katherine Mansfield who wrote the Thistle into one of her stories, ‘Leves Amores.’ Smartly furnished with a forest of native timber features and a roaring fire, I noshed heartily on a fabulous Zucchini Greek Salad from the gastro pub style menu, before perusing the numerous heritage photos evocatively lining the walls.

Also in the neighbourhood, if you’ve never seen the entertaining array of cartoons and puppets inspired by Parliament, be sure to pop into the Backbencher which serves pub and cafe meals throughout the day. The witty menu has something for every political persuasion, whether you’re up for J. Collins’ pork belly or A. Little’s crispy duck breast. You certainly can’t go wrong with a Tory tasting plate. Ambling up Hill Street past the Wellington Cathedral of St. Paul and Parliament Grounds, I roamed Tinakori Road, strolling by the egregiously gorgeous old villas and cottages that reach right back to Wellington’s European settlement. Many proudly sport their heritage cachet and backstory, with a bronze plaque from the Thorndon Society. 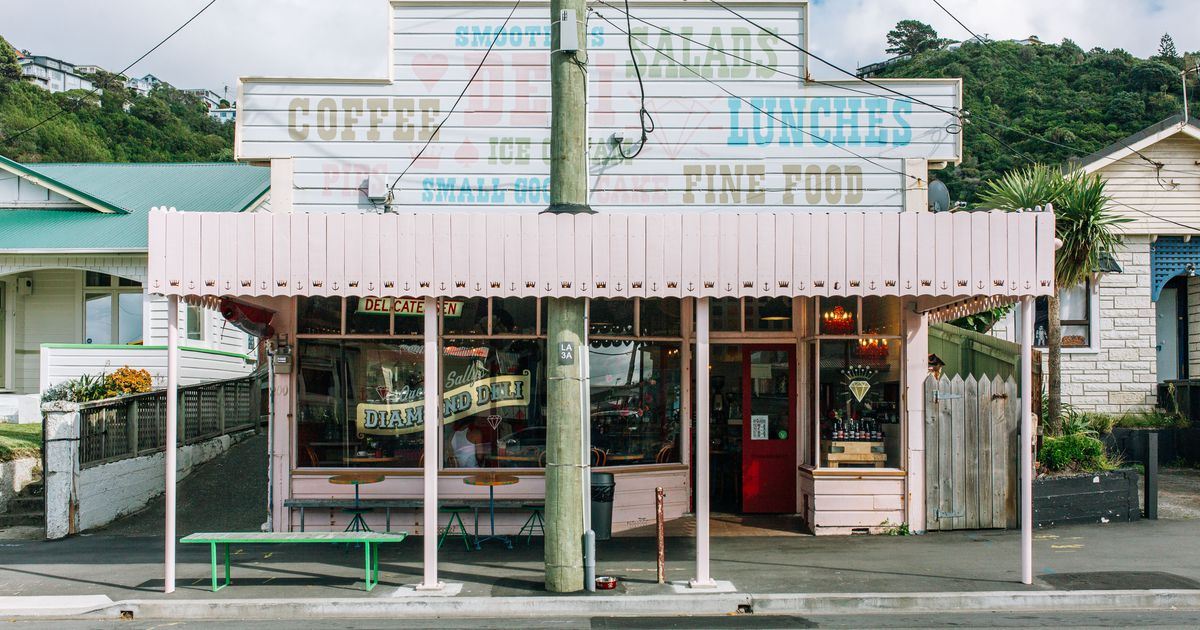 But few notable homes enjoy quite the acclaim as the Katherine Mansfield House & Garden, at 25 Tinakori Rd. Visit the 1888 birthplace of the venerated writer, whose atmospheric Victorian home is impeccably maintained. Dinner? Dine at Daisy’s, barely a year old, occupying the site of the old Tinakori Bistro. Under the command of Asher Boote, the revamped restaurant serves a modern take on Kiwiana comfort food, with classic dishes like creamed pāua on toast, slow roast lamb and mint jelly, and rhubarb and custard, plus steak frites. It’s a nod to broadcasting legend Aunt Daisy, with the venue resembling a snuggly dining room, with eclectic homely furnishings and a convivial atmos. Along with an impressive wine list, you can bring your own wine for a corkage charge.

After a solid night’s sleep, reminiscence was on my morning agenda as I headed to the suburb that I used to call home, when living in Wellington 25 years. Newtown’s cosmopolitan lustre certainly hasn’t dimmed, it’s still a bustling melting-pot of races and religions, revered for its urban funk and liveability. Brightly painted buildings in a carnival of colours and eye-catching street art sweep you into the clutches of Newtown’s buzzing shopping heart. I kicked off my exploratory with a caffeine fix at People’s Coffee, a Constable Street institution, who are sticklers for ethical trade and a hotbed for social activist-types.

It’s a common refrain in Newtown – I passed a second hand store, where all proceeds were going to the welfare of rescued horses. In a suburb joyfully endowed with bookshops, Food Court Books is a brand new player in the Newtown stable, specialising in small press and independently published books. Established by Carolyn DeCarlo and Jackson Nieuwland, they’ll passionately introduce you to new and unfamiliar books, mostly of New Zealand origin. There’s an in-store book club too, plus you’ll be swooned over by their customer service superstar, Dora the greyhound. Another new opening, just two months old, that’s creating a lot of buzz is Flying Nun Records, selling records and merchandise from their catalogue of artists, from The Chills to newer signings like Reb Fountain and Aldous Harding. 40 years on, the independent New Zealand record label is still helping musicians live their ultimate career dreams and the store manager, Callum Campbell, is very excited that in-store gigs will be part of the package in their Newtown digs. Peckish? Economical eats abound in Newtown, here’s a few pet picks. The Ramen Shop began life as a pop-up restaurant before becoming a permanent eatery in Newtown, by popular demand. Its mission is to be ‘accessible, fun and yum’, the noodles are made from scratch and there’s a range of sides to add to your steaming bowl of slurpy goodness. An alley-cat in Newtown is the rustically magical osteria, Cicio Cacio, a haven for authentic regional Italian food, under the command of Giulio Ricatti.

The menu is faithfully written in Italian but the staff will be only too happy to translate. The pistachios crusted fish, eggplants caponata dish is magnifico. If you’re wondering, Cicio Cacio translates as chubby cheese. It’s right behind Moon, Newtown’s vivacious gourmet pizza, craft beer bar & music venue. Gigs are held most nights. Then there’s the colour-popping delight of Viva Mexico, a go-to for kick-ass tacos and incredible cocktails. Don’t go past the feijoa margaritas. Need another caffeine fix? Amid this suburban hotbed of trend-happy cafes and funky shops, Black Coffee is a stellar venue, its walls serving as a canvas for temporary art exhibitions. Expect top-notch coffee and incredibly good sour dough crumpets, topped with orange and date marmalade, maple whipped ricotta and a pistachio crumble. Go on, add a side of bacon.

For a complete scene change, another prime neighbourhood with head-swirling dollop of hospitality brag factor is Lyall Bay. Melt away the city stress in the languid, sea-flecked, salt-sprayed hug of this beachside suburb. Whether you’re rolling or strolling your way around the surf-licked bay, there are fresh finds and old favourites aplenty, amid the flourishing food scene. Lyall Bay is proudly home to Parrotdog Brewery, which began a decade ago when three university students – all called Matt - started brewing beer, soon becoming one of the nation’s fastest-growing craft brewers. Parrotdog Brewery’s bar serves comfort food to wash down with beer, with a nightly roster of special events, from quiz nights to live gigs.

Effortlessly casual, the venue’s retro 70s design aesthetic is a winner. Right across the road on Kingsford Smith Street, a noteworthy newbie is Fresko, Lyall Bay's latest fish and chip shop, housed in a couple shipping containers, serving melt-in-your-mouth fresh fish and other favourites like Greek and Raw Fish salads. The fish is caught by the owner's uncle, swiftly filleted then battered and cooked straight after you’ve ordered it. As a plane-spotter, I was in av-fan-heaven at Spruce Goose, which began life as the original NAC terminal and before playing host the Wellington Aero Club. Today, it’s a cranking seaside café, bar and restaurant with expansive views of Lyall Bay and a prime perch over the southern runaway. Chock-full with chirping locals, the menu is loaded with crowd-pleasers. You can’t go wrong with the pulled pork tacos, with coleslaw, mayo, avocado and salsa.

Another favoured retreat for locals in the exciting new tide of offerings is The Botanist. With a plant-based menu and a lavish herbaceous interior, this is a salubrious spot for a seaside bite to eat. The Botanist’s menu of organic vegetarian and vegan menu pleases herbivores and omnivores alike, as does the outdoor beer garden, rotating craft beer taps and botanical cocktails.

After admiring the surfies carving up the waves, I called into Verdure Surf Studio, where I met Jack Johnson, who has created his own surf company focusing on a sustainable ethos. (Verdure means lush, green vegetation.) Located just one block back from the main beach, it’s the ideal space to create your dream surf board. Jack’s philosophy is straight-up. He builds his boards from a love of surfing and a belief that “the products we use to enjoy the natural environment should be made from materials that don’t contribute to its decline." Paulownia, hemp, recycled polystyrene and plant-based resins form the basis of his custom-made, ocean-friendly boards.  His inspirational studio is a thrill to explore whether you’re planning to ride the waves or not. www.verduresurf.com A big-gun in Lyall Bay, sprinkled with royal star dust courtesy of Harry and Meghan, is the Maranui Café, located in the clubrooms of the old surf club. This eccentric and nostalgic café, resplendently tricked out in 1940s-era surf club decor, is all about cheerful food, good times and epic seascape views. Taking a ringside seat overlooking the bay and perusing the all-day dining menu,  I plumped for a Buttermilk Pancake stack, complete with poached pear, banana, toasted pecan and mascarpone with caramel sauce. Bliss!

Finally, don’t overlook Maranui’s little sister, the retro-themed Queen Sally's Diamond Deli. Greeted by a sumptuous array of delicious, wholesome food and a cabinet groaning with delicious, seasonal salads, sandwiches and artfully-presented baking, my tastebuds went in overload. It’s like high tea meets a deli. Opened after a fire gutted the nearby Maranui café back in 2009, Queen Sally’s was created to keep the hardworking  Maranui café team in employment when a fired gutted the premises in 2009, but 12 years on, this merry little deli café is a Lyall Bay institution, accentuating the community vibe. For a pick me up snack, you can never go wrong with one of Queen Sally’s special pink Chelsea buns.

My base-camp in Wellington for my great neighbourhood forays was DoubleTree by Hilton hotel. Located in the repurposed T&G building, this near century-old dame was one of the Capital’s first office towers. Its design was inspired by Chicago-style architectural elements and fine art deco interiors, with marble, copper and wooden accents meticulously maintained throughout the hotel. Located on Lambton Quay, you’re at the heart of the action, staff are highly attentive and helpful, while accommodations are hushed, restful and loaded with comforts. www.hilton.com/en/doubletree/

Kick the winter blues to the kerb and treat yourself to a wild and energising time in the Wellington region. Make your first port of call the official website, jam-packed with constantly updated trip inspiration. www.wellingtonnz.com