It’s entirely possible to have a thoroughly riveting Gold Coast vacation without stepping through the entry gates of a theme park. But there’s no mistaking that for millions of families jetting to the GC for a getaway, those legendary theme parks take pole position on the holiday agenda. And fair enough too. Some of my fondest childhood holiday memories revolve around those enthralling theme parks. I’ve always viewed the GC as a Mary Poppins travel destination - ready, willing and able to spell-bind the kids!

The theme park frenzy of thrills and spills, great heights and sights, all combine to deliver a power-packed, headswirling vacation experience. Attractions are regularly refreshed, so because it’s been a while since Kiwis en-masse headed to these parks, here’s a look at some of the staple experiences and recently added installations to rev-up the titillation-factor! Dreamworld’s signature new ride is a reptilian rollercoaster experience with a top speed of 105km/h and a G-force of 3.8. Just fibve months old, hang on tight as Steel Taipan snakes around 1.2km of twists, turns and gut-lurching launches! With multiple inversions, it is Australia’s only triple launch coaster, which for the uninitiated means you will encounter three gut-lurching drops. It also features the world's first "Tailwhip" - a spinning seat at the rear of the train, if you are so inclined.

Another Aussie first and world first – a motorbike rollercoaster, or motocoaster, as it’s technically called. The Mick Doohan Motocoaster features life-size replicas of 500cc racing bikes and two aerodynamically profiled sidecars designed for small children and disabled guests. As you rip around the track and high-speed corners, you’ll clock 72km. It’s supposedly the next best thing to Moto GP racing. And you’ll definitely want to ride what is surely the best named rollercoaster in the world – the Gold Coaster! Speed through a 360 degree loop and 13-stories of heart thumping high-speed fun, hitting speeds of up to 85 km/h. A Gold Coast classic. Dreamworld is also a wildlife conservation park, housing a wide range of animals including their famous Tiger Island. If you’ve ever wanted to feed a tiger, you’ve come to the right place. Thankfully, you’ll feed them holding tongs. But this 15-minute experience will leave you roaring! The character star power at Dreamworld is fuelled by DreamWorks, with a cast of characters out in force include Shrek, Madagascar characters, plus Wiggles characters like Dorothy the Dinosaur and Captain Feathersword. And how could you not say G’day to Dreamworld mascots, Kenny and Belinda?

Movie World sets itself apart as one of the very few movie theme parks outside North America, blending an old Hollywood vibe with live character performances, interactive adventures and thrill rides galore. Top honours in the adrenalin stakes goes to the DC Rivals Hypercoaster – a seriously high coaster with a 1.4km long track. Reaching speeds up to 115km, you’ll experience a menacing 89 degree drop as you descend from the lair of the iconic Joker head. You can do it backwards, if you wish. What is a hypercoaster, you might ask? A hypercoaster is any complete-circuit roller coaster with a height measuring at least 200 feet. Movie World’s specimen measures 203 feet in height. 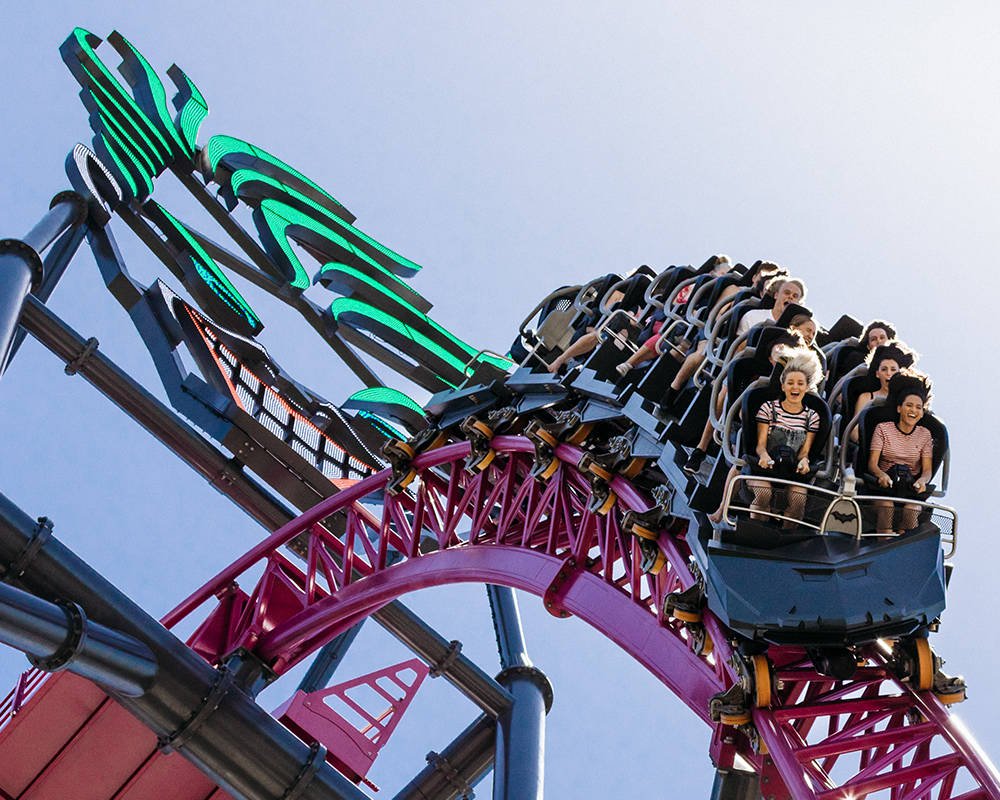 For more extreme thrills, there’s Batwing Spaceshot, which hurtles you 60 metres skyward at 100km an hour in just two seconds. 4.5 Gs of extreme power. How’s that for a holiday head-clearer? In fact,

like a good espresso, I went back for a double shot. For a freaky frisson, let me recommend the towering Green Lantern Coaster, which has the steepest inverted drop in the Southern Hemisphere. You won’t forget it. The Superman Escape coaster is an epic heart-pumper, dramatically designed with holes blasted out of the side of buildings, which your carriage hurtles through. 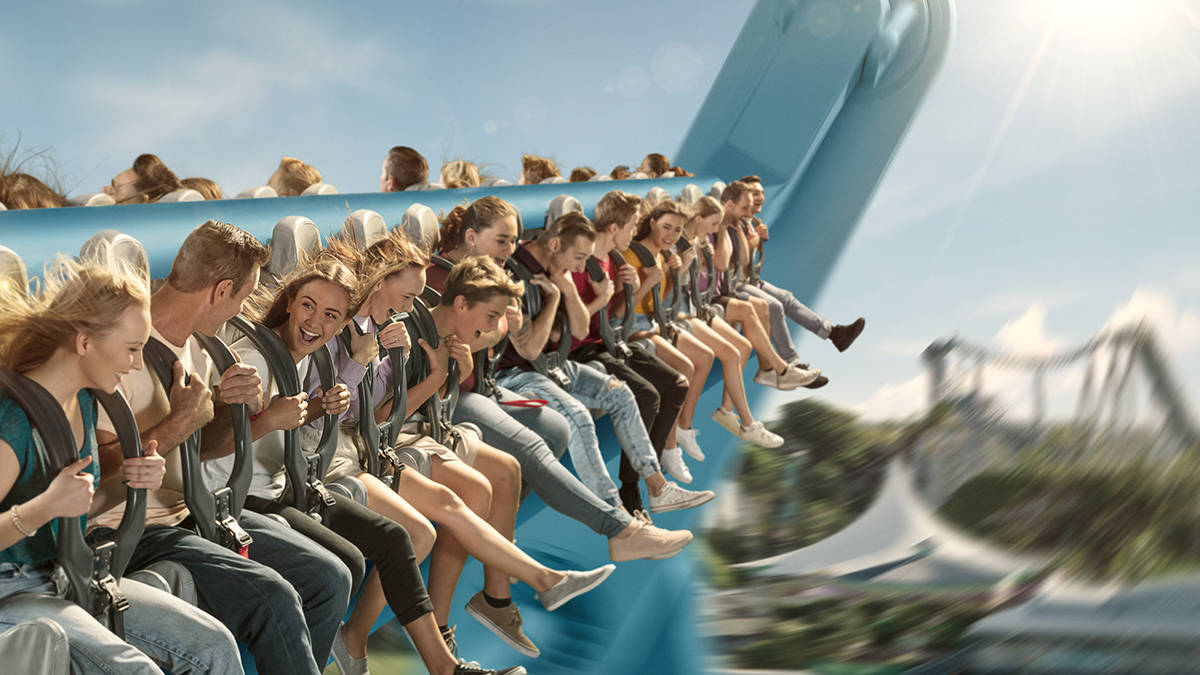 Another crowd-favourite is the Scooby Doo Spooky Coaster, which starts off like a gentle ghost train, before transforming into a full-tilt, multi-sensory extravaganza complete with laser lighting and state of the art animatronics. Kids understandably love Movie World for its outstanding array of highly engaging costumed characters, spanning Bugs Bunny to Batman. Selfie heaven! Movie World boasts a full day of adventure filled with all the glitz and glamour of Hollywood, your favourite Looney Tunes Characters plus the Super Heroes and Super-Villains of the DC Universe.

New additions at the park include the Scooby Doo 4D Film Experience. Just opened, the Warner Brothers studio showcases movie costumes and props, featured in all of the Batman releases since 1989. The collection of exhibits is enormous, from the Catwoman suit worn by Anne Hathaway to Ben Affleck’s Classic Batsuit and Grappling Gun. 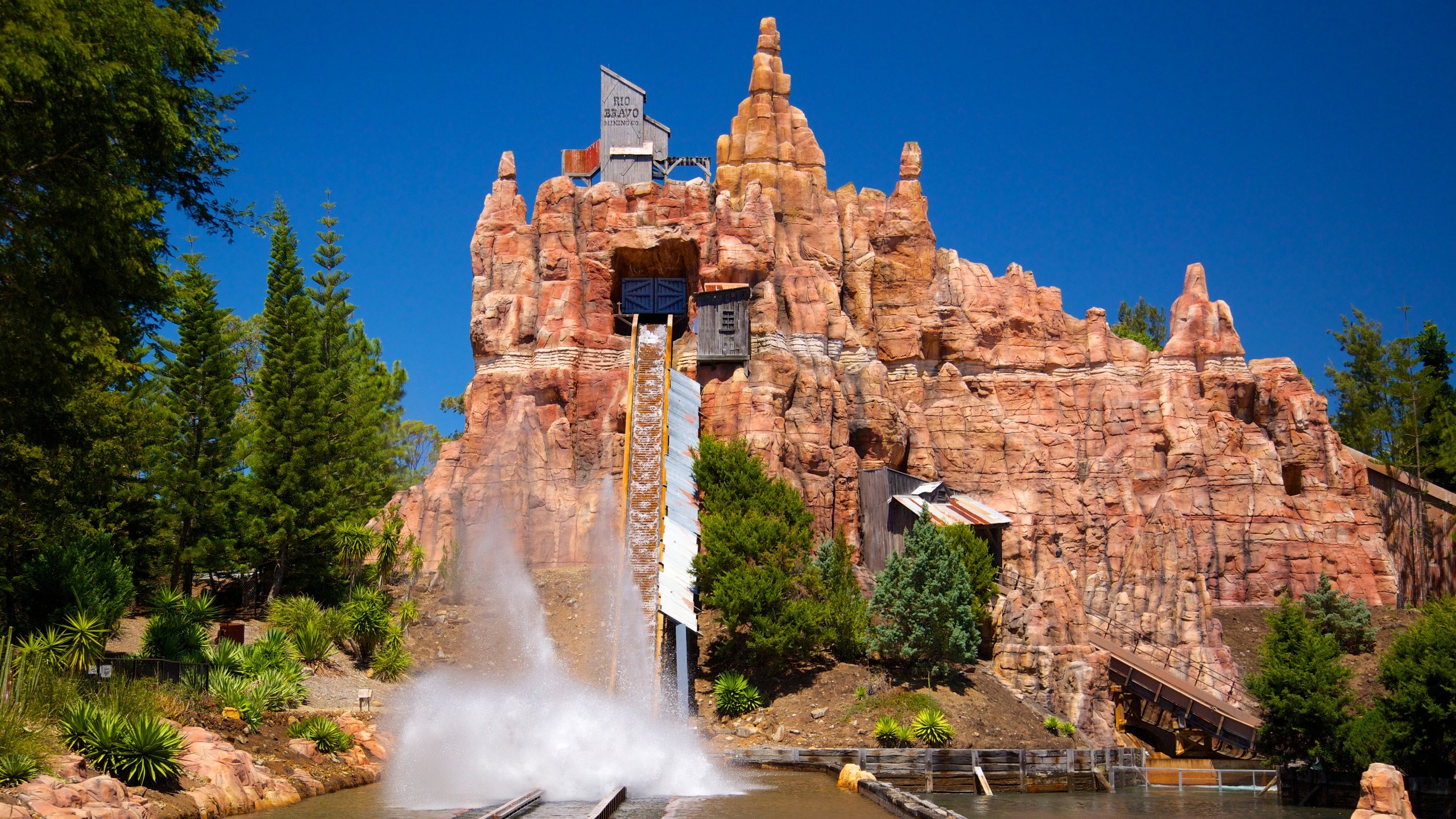 There’s all sorts of treats like batarangs and iconic vehicles to costume pieces from The Penguin and the Joker. It’s the biggest Batman props collection in the Southern Hemisphere. The movie magic really hits top gear at Movie World with the daily Star Parade down Main Street which is simply unmissable. I so want a JL52 Batmobile!

For a change of scenery, spend a day at Australia's largest marine theme park, Sea World, where you can get up close and personal with its stirring abundance of furry and flippered and feathered residents, from dolphins and seals to polar bears and penguins. Join Sea World for an educational adventure in the amazing Affinity Dolphin Presentation or chill out in the shade while the kids cool down in Sea World’s new splash pad attraction, The Reef at Castaway Bay.

A new addition to Sea World’s repertoire of animal encounters is the Dolphin Couple Adventure. What could be more romantic than enjoying a private experience with your partner, interacting with some inquisitive dolphins, guided by a trainer? You’ll learn about these beautiful mammals as they demonstrate amazing skills in a 45-minute encounter, with approximately 20 minutes spent with them in the water. 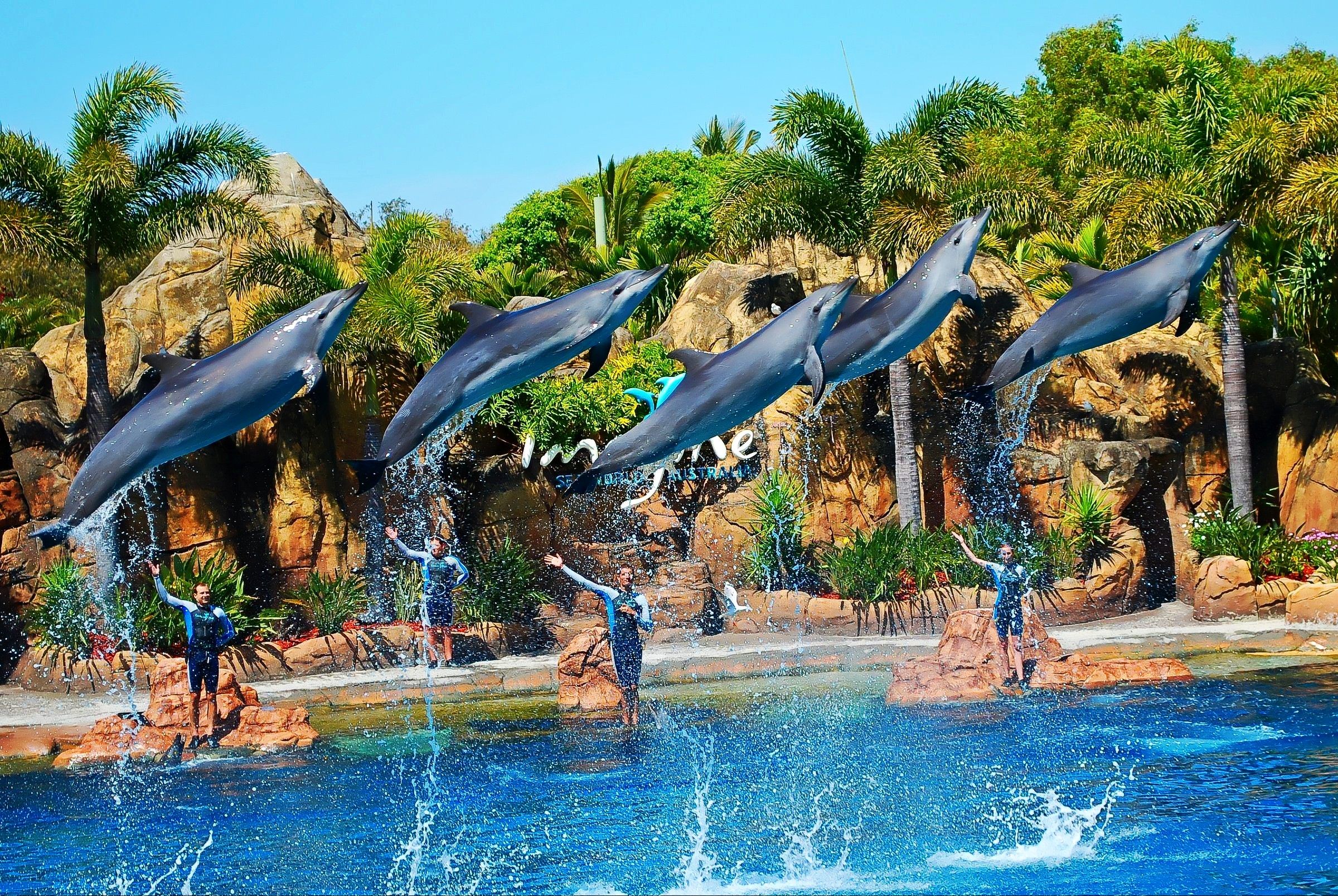 Don’t forget to stop by and meet Chase and Marshall from PAW Patrol and catch their show, PAW Patrol On Holiday at the Nickelodeon Stage. Thera a Nickelodeon characters galore to meet and greet all over the park, plus the Ninja Turtles live stage show is highly rated. As much as new novelties freshen the offering, there’s no ignoring the classics like the Thunder Lake Stage Show, with dare-devil stunt riding by a vast cast of water skiers and wakeboarders. The New Atlantis precinct is a game-changer for Sea World.

It is a thrilling and immersive new multi-million-dollar precinct revving up the park’s adrenaline-inducing fire power, with the three new world-class rides. Leviathan and Trident open in September, but the latest addition now open is Vortex, a twisting, turning, spinning thrill ride, that spirals around 15 minutes above the ground. Hold fire on the lunch break, until after that ride. Must-do coaster rides? Jump onboard the Storm Coaster, a rollicking water flume roller coaster ride, that goes under water and features explosive special effects. It’s the park’s largest ride.

Another big crowd-favourite is Jet Rescue. As the name suggests, this coaster sees you seated in a jet ski, zipping you around the track at a top speed of 70km, flying past rock pools and blasting through a blowhole cave. Oh yes! From theme park thrills and the glitter strip of golden beaches to the

ravishing world heritage-listed beauty of the hinterland and its mountain villages, start planning a great getaway to the GC.

I travelled to Australia with Cover-More Travel Insurance, which has the Covid age covered with added safeguards, over and above the typical travel cover, for the likes of medical treatment. Their Options Plan Single-Trip policy offers a host of built-in benefits and protections, including cancellation and rescheduling costs if you are diagnosed with Covid-19. Check out the full range of protections and tailor the level of cover to your requirements. Booking overseas travel? Lock in travel insurance you can trust.

I flew to the Gold Coast non-stop from Auckland with the low-fares leader, Jetstar. When you book on Jetstar.com, you're guaranteed the lowest fare. With their Price Beat Guarantee, if you find a better fare online, they’ll beat it by 10% - and that includes Jetstar flights you find on other websites. Conditions apply. Find out how it works.