Deep in the heart of the Ruapehu District, at the confluence of the Retaruke and Whanganui Rivers, lies a realm of rugged wonder, a wilderness experience to blow your socks off. It’s a kingdom of long soulful valleys, striking geological formations, beautiful gorges, stirring rainforest and stupendous balcony views high on the hill tops, reaching right across the central North Island. Owned and operated since its establishment in 2005 by Dan Steele, Blue Duck Station is dedicated to farming smarter, honouring the history and environmental regeneration on a grand-scale. He’s like a sustainable Fred Dagg, a happy conservation warrior, a good keen man with a deep-seated environmental conscience. Never one to rest his on laurels, his grand vision for environmental restoration sees him frequently expressing frustration at the lack of hours in a day. He’s a man in a hurry, a man on a mission and he throws himself into everything. 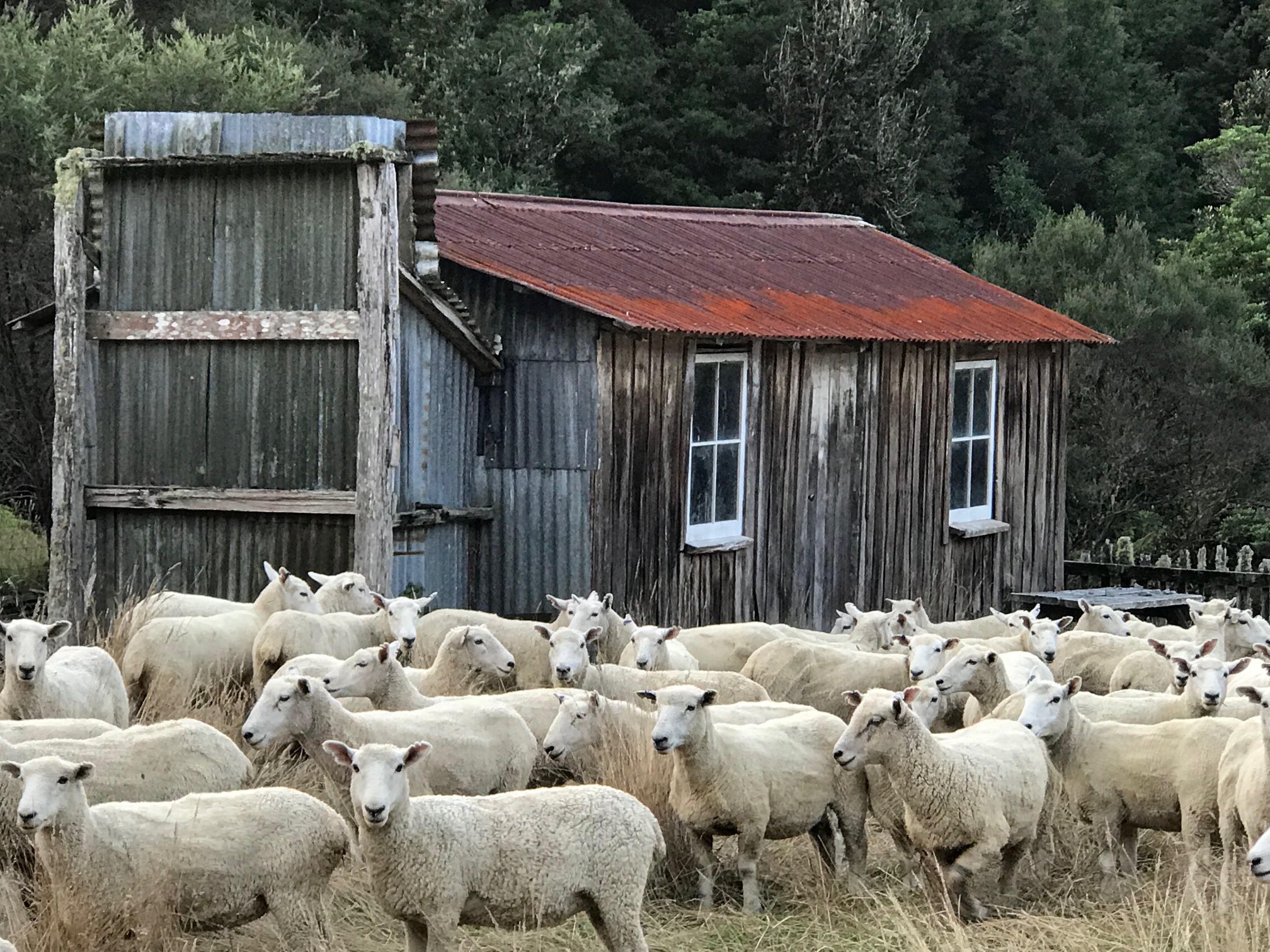 He’s been rescue helicoptered off the station on three occasions, after breaking his shoulder, his back and busting ribs. He’s a natural raconteur who will instantly cast you under his inspirational spell. Dan dreams of the day when there are so many kiwi thriving on the land, you have to shoo them out of your way. Dovetailing with his parents’ farm, Retaruke Station, and wrapped in the rainforest splendour of Whanganui National Park, Dan’s kingdom spans nearly 3000 hectares. One of the first things I noticed on arrival at this sprawling high country station are the wetland projects that Dan has embarked upon, determined to improve the water quality of the rivers. 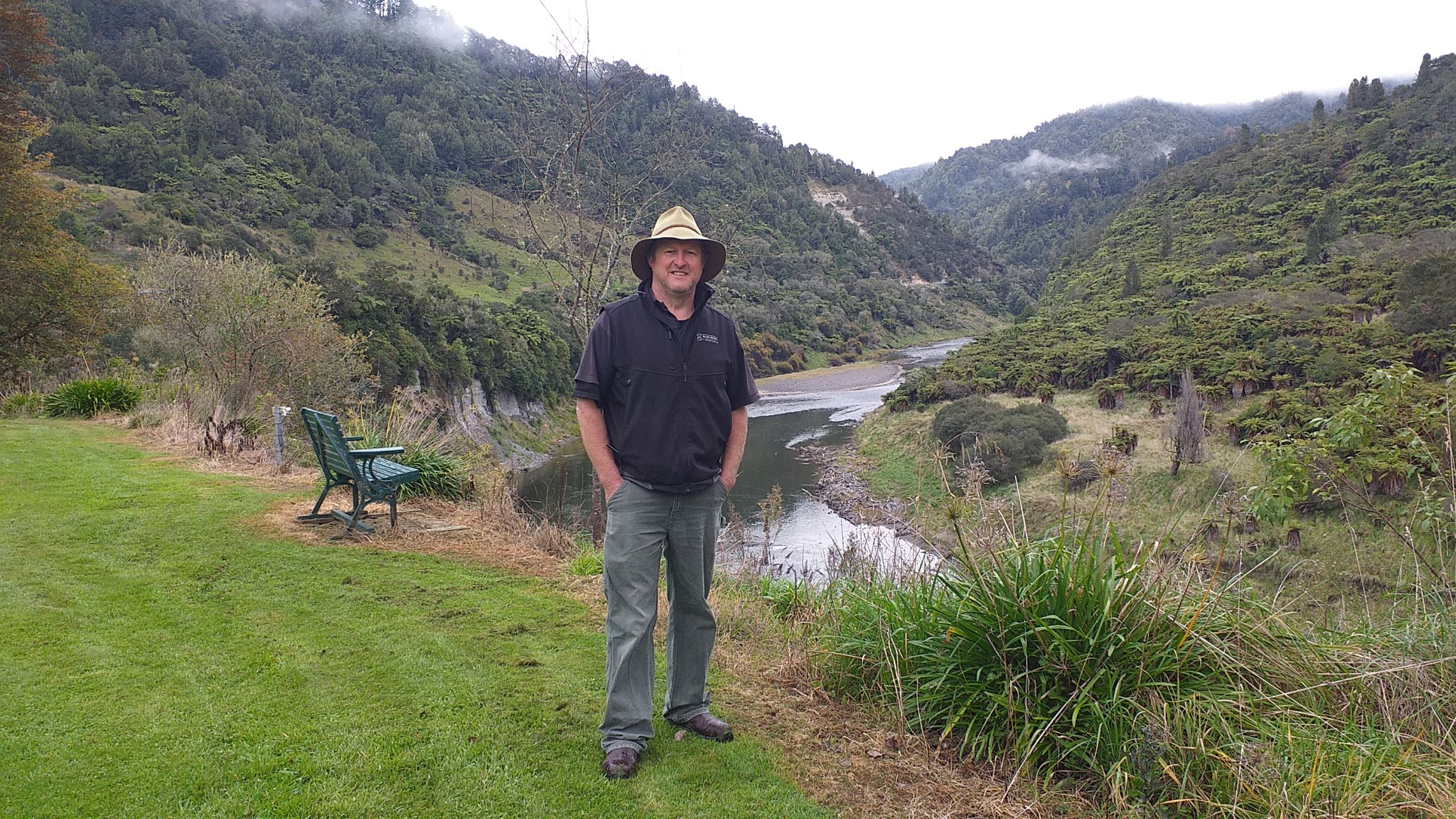 The newly created wetlands act as giant water purifiers that catch the water flowing off the hills, before it spills into the rivers. Sheep and beef farming continues, but conservation is at the heart of Blue Duck Station, including bolstering the local population of its namesake, the endangered whio or blue duck, who adorns our $10 note. Passionate about protecting the species, Dan tells me they are now registering the highest-ever recorded duck counts on the station. They’re a fascinating duck, with a rubbery end to its bill to feed on the underwater insects and larvae. The station supports a healthy brown kiwi population too, while nurturing the prospects of our native bat weta, numerous insects, fish and birdlife. I gazed in awe at the big flocks of tui and kereru. 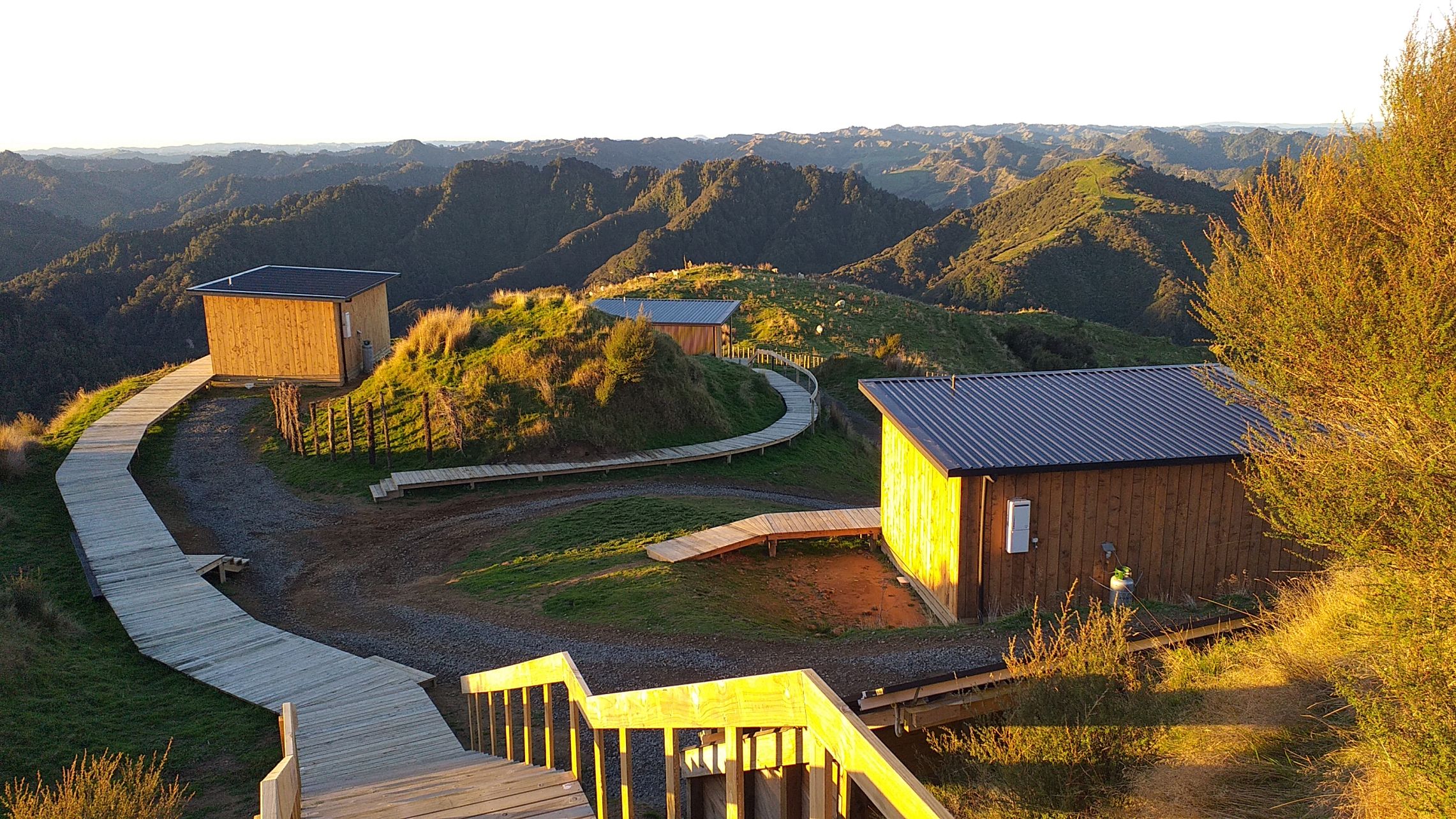 Dan took me on a comprehensive ATV safari tour all over the station, crossing burbling rivers, mounting formidably steep hillsides and basking in the ravishing blanket of the rainforest. At every turn, conservation endeavours are a constant, it dictates every decision made, with much of the farmland retired from service and reverting to native bush, while waterways have been fenced off. I was acquainted with the station’s “Ultimate Sheep”, an initiative that’s been underway for a few years to breed sheep better suited to the terrain and able to survive out here on their own, without any need for docking, dagging, dipping or drenching. They require minimal chemical inputs. A wild pig charged out across the path of our ATV, prompting Dan to remark that a new born lamb is like a hot pie to those guys. I bet!

Predator control is a relentless tour de force, with hundreds of traps located across the station. Alongside the usual suspects, like rats, possums and stoats, wild cats are a major problem even in the remote far-reaches of Blue Duck Station. Hunting is central to the conservation programme, taking aim at the wild goats, pigs and deer. Many visitors to the station are drawn by the guided hunting offerings. You can also head here to learn and to get involved with the day-to-day conservation work. It’s a place that fast gets under your skin. For the past decade, manuka honey has blossomed into another revenue stream, with over 49,000 kgs of high-grade manuka production off the farm last year.

Be sure to stock up on the good stuff, from Blue Duck Café, which crackles into life at night, with the family-style dinner served around the fabulous communal dining table, as the fire roars and the conversation flows. Pre-Covid, the station’s irresistible beauty lured tourists from all over the world. For the past year, the novelty of having this place to ourselves has drawn hordes of Kiwis to discover its secrets. Mountain-biking, kayaking and guided horse-trekking are all hugely popular here and the station has also launched multi-day horse treks, rediscovering the remote wilderness landscape of forest, mountain tops and river valleys.

The sense of history is ever-present, there’s a cluster of preserved historic dwellings on the station – remnants of the era when World War I returned servicemen tried in vain to farm the nearby Mangapurua Valley. Such a treasure is the old Depot building (circa 1919), which was once the supplies store for those returned servicemen who broke in the rugged country at the ill-fated Kaiwhakauka settlement. I loved exploring the historic tracks and bridges, like Lacy’s Bridge, from that era. From Blue Duck Station, you can take a guided jet boat tour, an hour down the Whanganui River to Mangapurua landing for the stroll to the iconic Bridge to Nowhere, stands testament to those settler farmers and their valiant efforts to tame the landscape. You’ll also relish immersing yourself in the watery wonder of the river and its papa cliffs. Māori history runs deep.

I saw where a great Māori chief is buried just above the river in the national park. Dan, his wife Sandy and their four children live in one of the pioneering farmer houses, the original station homestead, which was originally the home of the Dobbs family and their 18 children! Dan’s not intending chasing that record. Blue Duck Station offers great-value accommodation in five rustic lodges. I stayed in the Frontier Lodge, paying homage to the first pakeha settlers in the valley. Sitting modestly in its meadow-like surroundings, the lodge has been designed to have a minimal impact on the environment. With ultra-thick insulation and thermally efficient glazing, it’s a warm and toasty roost to lay your head. With three en-suite rooms, each with their own entrance, you also have access to the shared kitchen and living area, while the wonderful café is just a 200 metre stroll away.

If you want to have a seriously good splurge at Blue Duck Station, the latest next-level offering elegantly graces the farm’s loftiest mountain ridge. Chef’s Table at Blue Duck Station is a daring addition, serving up one of the most remote accommodation and fine-dining experiences in the world. Accessible only by chopper or 4WD, the venture is a collaboration with youthful British star chef Jack Cashmore who visited, fell in love with and now makes his home on the farm. With three luxury double en-suite cabins crowning the ridgeline, a short boardwalk leads you to the restaurant, where a 10-course degustation menu awaits. The whole experience begins all terrain vehicle safari through the vast station’s extraordinary rainforest. 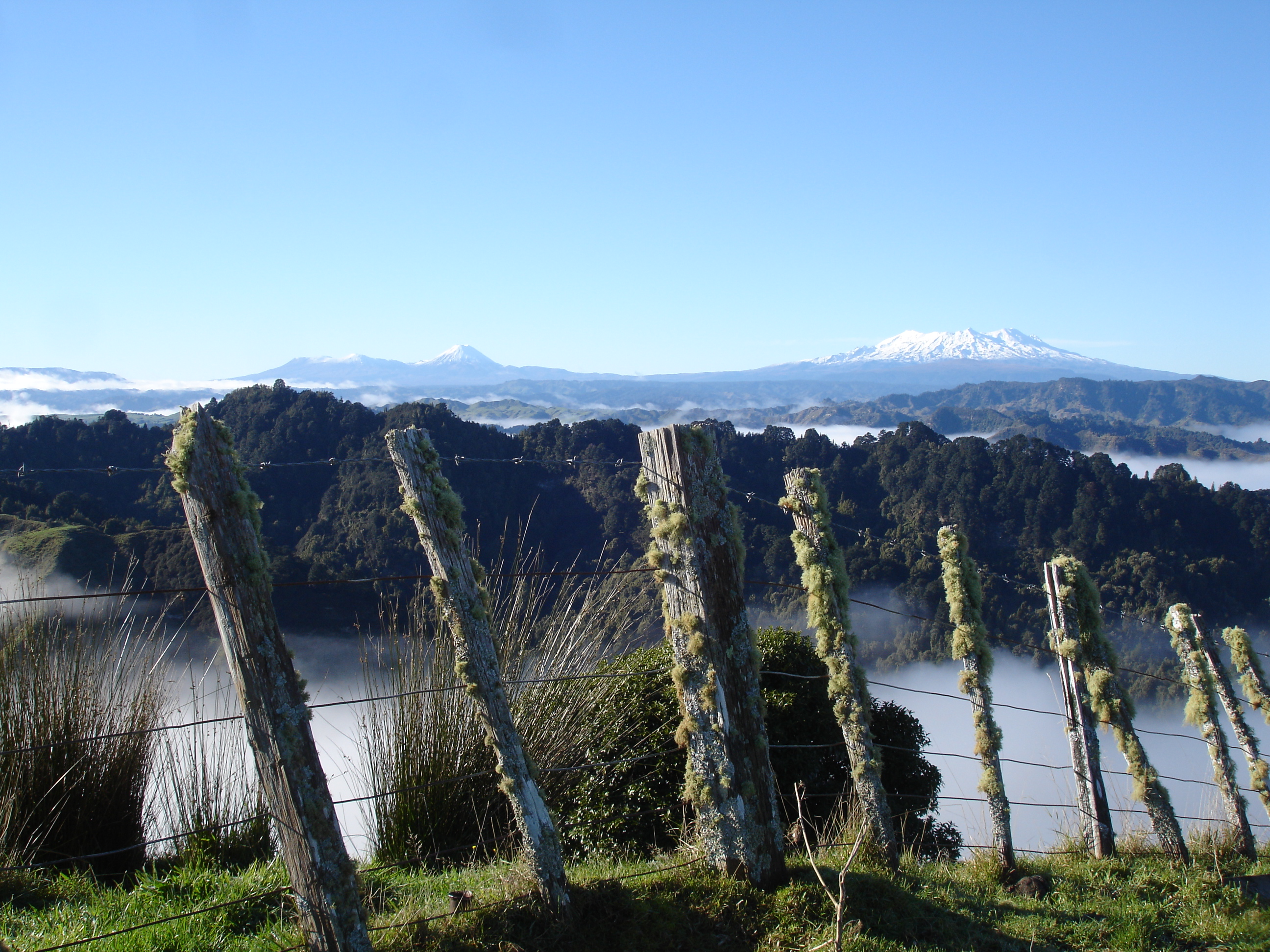 Foraged and sustainably farmed produce from the land surrounding you, powers the refined tasting menu, from wood ear mushrooms and native herbs to farm meats. The stripped-back, unique fine dining experience under the pollution-free star-flecked sky of Blue Duck Station all combines to create a distinct bucket-list experience. Standing atop this towering terrain, it’s the horizon-wide views across the rows of ridgelines that took my breath away. Looming large to the east, Mt. Ruapehu gleamed in the sunshine, while the banished one, Mt. Taranaki studded the western horizon. It’s a spine-tingling location and you can enjoy the entire overnight The Chef’s Table experience for just $650 per person. Blue Duck Station is such a charismatically uplifting sort of place, it will steal your heart. It’s an off-the beaten-track heartland destination beyond comparison and an essential New Zealand experience. www.blueduckstation.co.nz

I tripped around the North Island in an Avis rental car. Alongside great deals, enjoy Digital Check-in to minimise physical contact with rental staff and Risk Free Bookings allowing you to change or cancel reservations, without fees, for rentals due to start before 19 December 2021. www.avis.co.nz

The drama, diversity and grandeur of the Ruapehu District sets the stage for spectacular year-round outdoorsy adventure, with experiences that cater for all age ranges and abilities. Blessed by two national parks – Whanganui National Park to the west and the world-heritage wonder of Tongariro National Park on its eastern flank, make your first stop the region’s official website. www.visitruapehu.com