Pocket-sized Timaru lives and breathes the seaside. Salt spray seasons the air in this South Canterbury city, with an unmistakeable holiday vibe that merrily suffuses its storied playground, Caroline Bay. From a very young age growing up in Christchurch, countless family summer holidays were spent in Timaru, where a summer staple remains the Caroline Bay Carnival, which soon celebrates its 110th outing. Brimming with rides, sideshows, talent quests and live concerts in the Sound Shell, the summer carnival is old-fashioned family fun.

I began my recent visit to the plucky South Canterbury city, gazing over Caroline Bay from the lofty clifftop perch of Bay Hill. The fabulously convivial Bay Hill Brewery Bar was doing a roaring trade in the spring sunshine as I drunk in the expansive view, reflecting on the back-story. Caroline Bay was one of New Zealand’s first beaches to be developed along the lines of an English seaside resort. It’s the only sandy beach between Banks Peninsula and Oamaru and a super safe beach to swim in. Another confection studding the recreation reserve is the acclaimed Trevor Griffiths Rose Garden, which sports a rose from every rose family in the world.

Trevor’s collection of authentic old roses was once the third biggest in the world and it formed the basis for this public garden, complemented with 600 contemporary roses from David Austin. Eager to stretch the legs, I headed to the northern end of Caroline Bay to size up proceedings on the Memorial Walkway that leads you across the Benvenue Cliffs and the historic Blackett’s Lighthouse, a gorgeous structure that dates back to 1878 and the origins of the port’s development. Clad in narrow kauri weatherboards, it remains one of the last standing timber lighthouses in New Zealand.

The ravishing ocean views intersect with some striking geology further north of the Dashing Rocks walk, which leads you to the ancient lava flows of Mt Horrible, spilling into the sea, and giving rise to a rocky platform of basalt columns. They proved a popular Maori fishing spot and early Europeans would use the point as a trusty coastal whaling lookout. The volcanic rocks are quite the spectacle. History runs deep in Timaru and the city’s main thoroughfare of Stafford Street is endowed with a sweeping parade of ornate Victorian and Edwardian architecture.

Oamaru’s stirring collection of neo-classical whitestone buildings routinely overshadows Timaru’s trove of period architecture, but you’ll struggle to find such complete and extensive character streetscapes quite like Timaru’s vast assortment. Bursting with retail therapy, the CBD is well endowed with funky boutiques and independent stores, including Mac Shaw Menswear, Serendipity, Heirlooms, Tuesday Store and Black & Co. Don’t miss Mille Rose for their fiendishly extravagant cupcakes. I ventured to the pint-sized by punching-above-its-weight South Canterbury Museum, which walks you through the region’s story with aplomb, including an introduction to some of the South Canterbury’s greatest heroes.

A beautiful replica of Richard Pearse’s “flying machine” dangles from the ceiling, who flew this microlight-looking contraption in March 1903, months before the legendary Wright brothers. For another great dollop of art and culture, take a jaunt through Aigantighe Art Gallery (pronounced “egg and tie”), housed in a gracious old mansion that was built by Alexander and Helen Grant in 1908. Retired Mackenzie Country farmers, Helen Grant died in 1956 and she bequeathed the estate and her glittering art collection to the local community. The gorgeous old mansion sets the stage for her priceless collection of pieces, including Colin McCahon, Frances Hodgkins and Charles Goldie.

Aigantighe’s collection is so immense, it’s the South Island’s third biggest public art museum. Speaking of heritage, a beloved city landmark is the 1870s Landing Services Building, a 2-storey bluestone gem, cleaved out of volcanic basalt rock. The building serviced the boats that rowed in and out to the moored vessels to transport their goods, prior to the development of the port. You can still see the three double doorways for drawing the boats inside. Outside, on the forecourt, a gorgeous statue pays homage to the pioneering Timaru businessman, Henry Cain, who operated the fledgling settlement’s first landing service in 1857, before becoming mayor.

Today, the building houses a variety of attractions including Te Ana Maori Rock Art Centre and the lip-smacking Street Food Kitchen, which doubles as an alluring restaurant and cocktail bar. The Asian-fusion menu is a taste sensation, while the cocktail menu is as inventive as it is expansive. Street Food Kitchen has raised the bar on the city’s hospo credentials. Another irresistibly unique experience is to enjoy some libations at Hector Black’s Lounge Bar. This Stafford Street venue is whimsical, wondrous and wildly eccentric. Lavishly furnished in fabulous interiors, I found myself lounging on a leather sofa, sipping superbly crafted cocktails, while ogling the bar’s namesake, the taxidermized dog, Hector, while his alive and kicking son, Nash, snuggled up to me. The array of taxidermy animals is breath-taking including an upright wild pig that looks like he’s about to burst into song. An eclectic spree of antiques and art pieces festoon the walls, from the hymn number boards you’ll typically find in country churches to auctioneer podiums. More than just a bar but a social nexus, Hector’s plays host to live music, auctions and all manner of social gatherings. It’s a do not miss!

For Timaru’s best dining, hop across the road to The Oxford, housed in a century-old building with a swish monochrome décor. Service is sparkling and whip-smart while the cuisine is high-class comfort food starring local produce and fresh, full-bodied flavour. The duck wontons are a delight, while I devoured my Cuban Pork main with relish. Open for brunch, lunch and dinner, with a standalone bar and brasserie, in addition to the dining room, The Oxford is a radiant experience.

I stayed the night at Timaru’s grand dame, The Grosvenor, which has launched a heroic earthquake strengthening project to sure up this time-honoured hotel’s future, after 135 years of illustrious service. Celebrities, international rugby teams and royalty have all stayed at the Grosvenor over the years. During her 1954 visit, the Queen and Prince Phillip rested in Room 101, dining on baked mountain trout and Veuve Clicquot. As you do. Hotel rooms are well-sized and comfy, with complimentary WiFi, tea & coffee and off-street parking. Room rates are sharply priced. You can dine in the TGB restaurant, with its dramatic high ceilings and nostalgic exposed brick. www.thegrosvenor.co.nz

South Canterbury is studded with a trove of hidden gems, headlined by the region’s Maori rock art. Te Ana Maori Rock Art Centre gives you a great introduction to our nation’s first art galleries. Limestone rock faces and the walls and ceilings of caves served as the canvas for Ngāi Tahu, over hundreds of years. The centre houses eight artworks that were cut from the limestone rock face over a century ago. I then joined a Ngāi Tahu guide, Sue, for a riveting tour to one of the most revered cave sites, home to the Opihi taniwha, near Pleasant Point. Sue remarked that the South Canterbury and North Otago area boasts hundreds of rock art sites, studding the Opihi and Pareora river valleys, generally north-facing nooks, sheltered from the southerly. 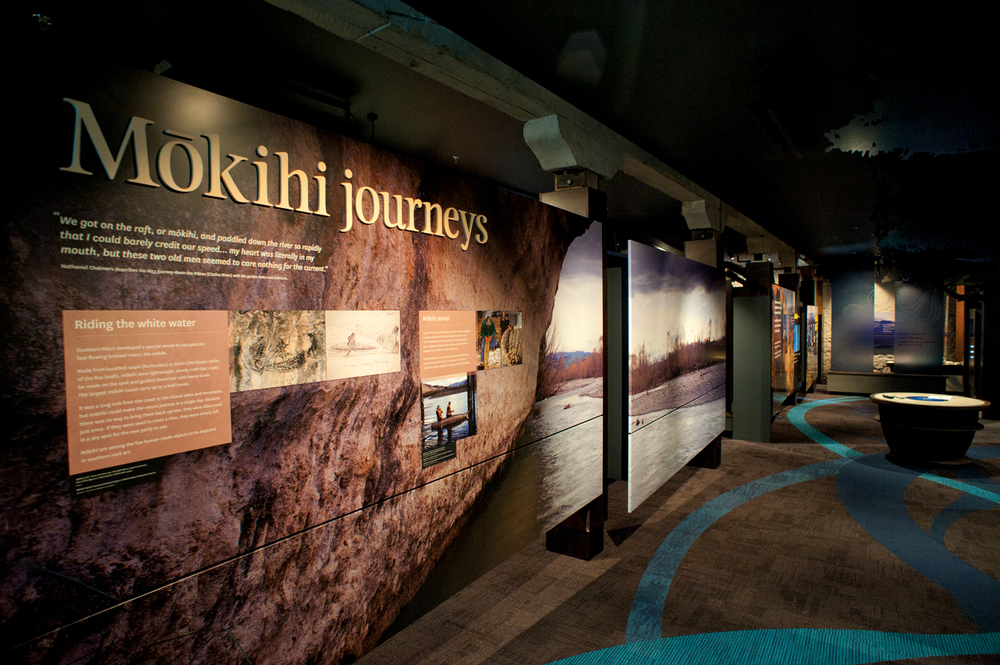 The overwhelming majority are sited on private farmland, which thankfully safeguards them from vandalism. The rivers served as their food-gathering highways, hence why the drawings are concentrated here. The Opihi taniwha has appeared on everything from postage stamps to Theo Schoon’s interpretations. Spanning more than five metres across the cave ceiling, the drawing resembles a mash-up of swollen bellies and entwined tails. It was originally painted in ochre red, but subsequently touched up in black pigment, although by who or when remains a mystery. The valley setting in which the Opihi taniwha cave drawing lurks is spectacular hinterland, soulful and tranquil. It’s being heavily planted in native seedlings in a bid to restore the valley to its primeval state. https://www.teana.co.nz/

Pleasant Point is a charismatic village, that would count amongst its highlights reel being the birthplace of the Denheath Custard Square. (You’ll find them on sale in any half-decent supermarket or tearoom, across Canterbury.) If you’re a fan of taxidermy, you’ll be in seventh heaven in GD O’Rourke & Sons, who have been preserving trophy kills for hunters for decades. A vast menagerie of animals are mounted on the walls. The Age of Steam still captivates the passions in these parts, with the Pleasant Point Museum and Railway enthralling allcomers over the summer months. Local enthusiasts rescued the “Fairlie Flyer,” an AB 699 steam locomotive from oblivion and restored it to mint condition, operating excursions along the railway line.

There’s also a replica Model T Ford rail-car, which is the only one operating in the world. Meanwhile, just on the outskirts of Timaru, close to the airport, the South Canterbury Traction Engine & Transport Museum is another fascinating Aladdin’s Cave of vintage machinery. There are numerous steam powered items including two working traction engines, a plethora of vintage farm machinery and tractors, plus the second biggest collection of vintage trucks in New Zealand. It’s open for viewing every Saturday afternoon.

Surrounded by lush pasture and backed by the majestic spine of the Southern Alps, Timaru is a thriving seaside city, jam-packed with family holiday fun, heritage attractions and stirring cultural jewels. Inject Timaru into your self-drive holiday plans this summer. www.welovetimaru.nz