The mighty Waikato is tailor-made for free-roaming, a proud province chockfull of enticing towns, villages and striking natural attractions, from middle-earth to wonderland underground. Sometimes excitement is foiled by reality, but a foray to Waitomo still managed to eclipse my bright-eyed expectations. Waitomo’s enchanting playground, 30 million of years in the making, all began with the creation of limestone at the bottom of the ocean.  With a wealth of touring options on offer, I opted for the old faithful, the original Waitomo Glowworm Caves tour, which has been hosting visitors since Victoria was on the throne. My beginners tour, led by a descendent of the local iwi who helped discover the caves over a century ago, is a journey into the subterranean world of stalactites, stalagmites, columns and natural caverns, including the unbelievably spectacular cathedral, which regularly hosts acoustically-perfect concerts. 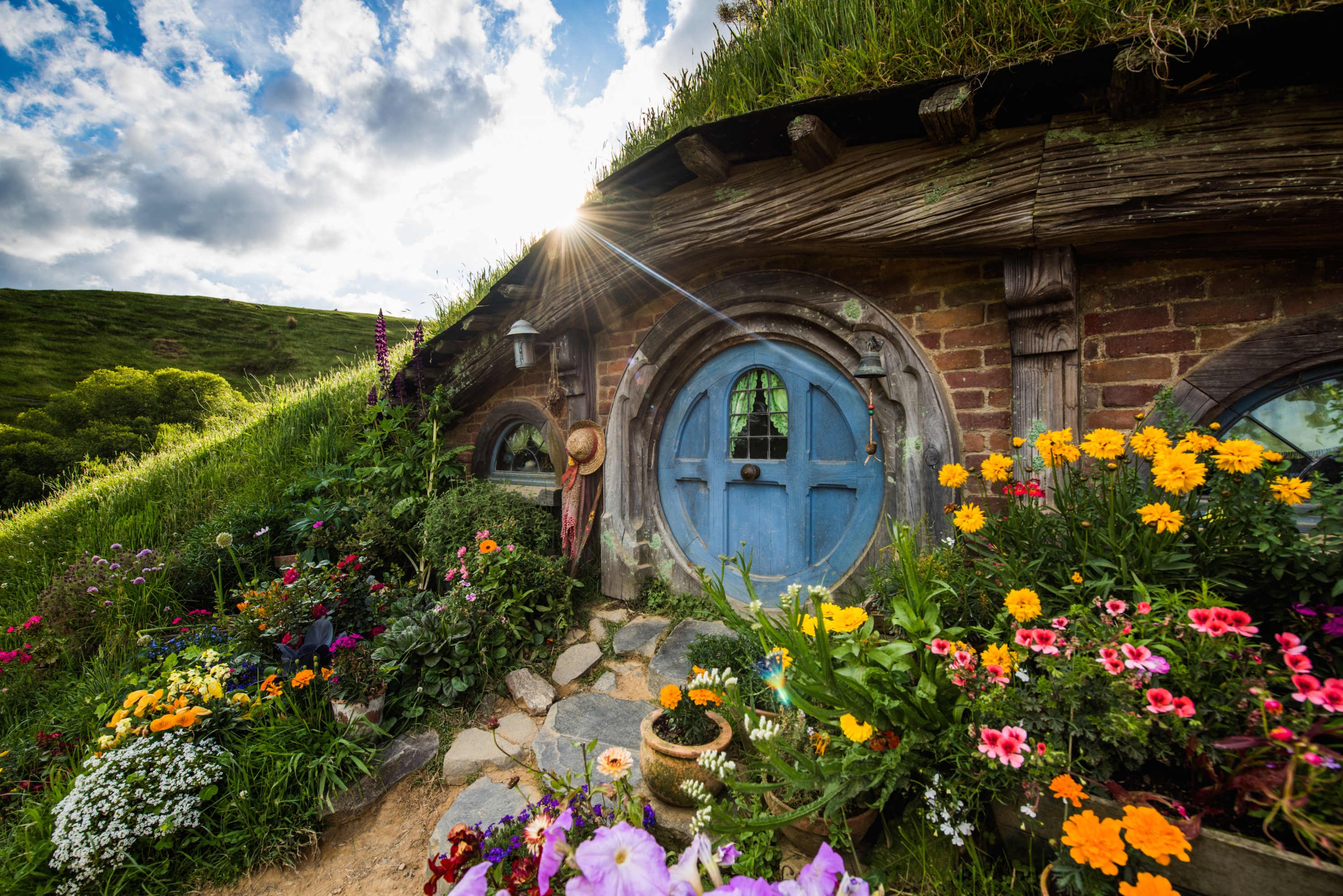 The highlight is the mood lighting – the starry ceiling of the caves, illuminated by the magic of New Zealand’s native glowworms.  When you’ve had your fill of communing with the caves, set aside time for a quick westward jaunt to an above-ground natural wonder. The Mangapohue Natural Bridge Walk would easily rank as one my favourite short New Zealand bush walks. From the road, the well-marked track weaves through pristine native bush, full of birdsong, to the crowning glory of this ancient cave system – the Mangapohue Natural Bridge.  Strutting 17 metres high, this dazzling limestone arch that spans the Mangapohue Stream, is all that remains of the age-old cave, now veiled in native greenery.  The walking track’s magnificently constructed stairways enable you to size up this towering landmark from all perspectives. The track then descends to farmland where you can see 25 million year old fossilised oysters exposed in limestone outcrop.

Throughout March, Waitomo Arts Month is rolling out a packed calendar of creative events, exhibitions and demonstrations. The Waitomo District boasts a thriving community of artists who will be passionately showcasing their creativity. Many of the events are interactive like the Ruakuri Cave Photography Workshops. You can experience artwork from local Māori artists in action at the Waitomo Glowworms Cave Visitors Centre, every weekend throughout March, including painters, carvers and tattooists. Meanwhile, on display at Waitomo Homestead throughout the month, the Atakura Art Exhibition. It’s free to enter to admire Marc Lenton and Henriata Nicholas’ vibrant exhibition of paintings, multimedia and sculpture. https://www.waitomo.com/whats-on

There are so many colourful, distinctive and quirky towns and villages, which fiercely strut their own personality, within a 45 minute radius of Hamilton. Close to Waitomo, there’s cute-as-a-button Piopio, home to the fabulous Fat Pigeon Café, while just up the road in Otorohanga, you’ll find their equally fabulous sister, the Fat Kiwi Café, in the self-styled Kiwiana capital of New Zealand. Both of these cafes are regional rock-stars, where the cabinet food is a parade of joyful classics, with a supporting cast of gourmet menu options. Their Moroccan Lamb Pita is divine.

Strung along the Ed Hillary walkway, the Kiwiana walk showcases the full spectrum of pop culture icons from Bonus Bonds to the Buzzy Bee.  Then you’ve got all the street murals, lamp post installations and Steve Clothier’s giant corrugated kiwi in the heart of town. Otorohanga is seriously kitschy but seriously cool. Speaking of Steve, another landmark Waikato town is Tirau, his home-town, where the main street is bedecked in his corrugated creations. No longer a drive-through but drive-to town, travellers flock to see those giant farmyard sculptures, like the dog, the sheep and the ram’s head. I love how the local iSITE is housed within the ginormous sheepdog.

East of Hamilton, Matamata has become synonymous with the movie magic of Hobbiton. Interestingly a third of all visitors have never read a Tolkien book or watched an entire movie - including myself. Pre-Covid, over half a million people were visiting the 44 hobbit houses strung around the hillside, before drinking amber ale at The Green Dragon Inn.

The lines between movie fantasy and tangible reality are indivisible at Hobbiton, as if you’ve entered a third realm. Sir Peter Jackson is renowned for his pursuit of perfectionism, but I was still blown away by just how exacting he was with everything at Hobbiton. The fake silicon oak tree took the cake for me, dressed with two hundred thousand fake leaves. Upon completion, Jackson didn’t like the colour of the leaves, so they were all re-painted by hand, even though the tree was only in shot for 10 seconds. It’s those kind of stories that gush forth on a Hobbiton tour, enriching the experience immensely in this breathtakingly beautiful fantasyland. New family pass rates and Super Gold Card discounts have been recently introduced to encourage more Kiwis to enjoy a slice of this magnificent movie-set, sprawling across the Alexander family sheep farm.

Another effervescent Waikato town is Te Aroha, founded as an Edwardian spa town and proudly home to the world’s only hot water soda geyser, the Mokena Geyser. Treat yourself to some silky-smooth indulgence in the mineral water spas, which are just the tonic after some outdoorsy pursuits. I called into the spas after chalking up 37km on the Hauraki Rail Trail, between Te Aroha and Matamata, which is the last section of the full 197km route. Like most of the trail, this final section is a gentle flat ride, whizzing across the patchwork quilt of fertile plains, passing prized horse studs, goat farms and sprawling groves of scented trees. Just before Matamata, I made a detour to the mesmerising Wairere Falls. The return walk to the viewing platform at the base of the Falls takes about 90 minutes, but will reward you handsomely. Also worth a stop, The Firth Tower, built in 1882 by Josiah Clifton Firth, the unofficial Duke of Matamata. As a champion of the use of concrete, his tower in Matamata and his Auckland residence, “Clifton” in Mt Eden, are among the oldest concrete buildings in New Zealand. His sons went on to establish the Firth Concrete Company, which continues to operate today as a division of Fletcher Building. Serving up commanding views across the pastoral landscape, wrapped in tranquil gardens and venerable oaks, it was constructed as a fortified lookout across his colossal Matamata estate. It was also used as the estate office and sleeping quarters for single men. As you do.

I hooked up with Steve and the team at Lake District Adventures, a family run South Waikato business, based on the shores of stunning Lake Karapiro. Steve got me sorted with bike hire for the Hauraki Rail Trail, whether you want a standard bike or e-bike, at excellent rates. They also offer a shuttle service across all points of the Hauraki Rail Trail, in addition to other area trails. Plus Lake District Adventures offer a range of guided tours including twilight kayak glowworm tours and mountain bike tours. They are the go-to for Waikato outdoors. https://www.lakedistrictadventures.co.nz/

My final port of call was Cambridge, stately, graceful and underpinned with impeccable horsey sensibilities. Exuding an unmistakable ‘Old English’ charm, with its magnificent canopy of aging oaks draping across the main street and rich trove of antiques and homeware shops, it’s easy to see why people linger in Cambridge to shop and nosh. Whether it’s ceramics, art, silver, gold or something a little out of the ordinary, retail therapy is seriously addictive. The area has a rich pioneering history with many international influences, which makes for a diverse selection of antique wares. I walked out of many of their stores feeling as if I’d just been immersed in a glorified museum.

Understandably dubbed the town of champions, its gold-medal winning Olympian residents and its and illustrious heritage of thoroughbred racing are vividly showcased. Wander along Duke St to find 25 plaques honouring the achievements of local stars in the Sporting Walk of Fame, and as you turn into Victoria Street, look for 18 mosaics set into the footpath of prominent locally-bred horses, including 13 Melbourne Cup champions and counting. Definitely go and check out the Avantidrome, a world class sports facility centred around the purpose built wooden cycling Velodrome. If you laid the individual lengths of timber out, it would stretch for 52km. The track is formidably steep, with a maximum slope of 43.5 - but you’re welcome to give it a crack, during the Have a Go sessions on the weekend. I was happy to just grab a spot in the stands and watch New Zealand’s track cyclists train, just a few months out from Tokyo.

Dining? Make tracks to Good Union, the home of Good George brewing in Cambridge. Just as Good George’s Frankton base is housed in an old church, so is the Cambridge satellite. Good George is also the brewer of Hobbiton’s Southfarthing range of beer, cider and ginger beer. Alongside their craft brews, it’s their bbq experience which you will drool over, where locally sourced meats are cooked “low and slow” for up to 15 hours using traditional woods.

Another Cambridge favourite is Alpino, housed in the town’s original Post Office. Built in 1908, the clock tower was dramatically removed in 1934 (after the Napier earthquake sparked fears it could topple) and it now stands in Jubilee Gardens. Alpino specialises in modern Italian Cuisine, with a salivating range of pizza, pasta and share plates. Make some room for Dolce. My top tip for dessert? White Toblerone Chocolate Mousse, Strawberries and Shortbread. Bellissimo.  www.waikatonz.com

I flew to Auckland with Jetstar for my Waikato roadie. Score even sweeter deals with a Club Jetstar membership. The programme offers travellers access to special ‘member only’ fares, 20% discount on baggage and seat selection products, and early access to the biggest sales. Bag a bargain fare deal and seat to suit at www.jetstar.co.nz

I picked up my Avis rental car from Auckland Airport to free-roam Waikato. The Avis Safety Pledge allows customers to pick up and drop off vehicles with minimal contact. This has been complemented with the Digital Check In option, dramatically speeding-up time at the counter. To travel with complete flexibility, select the Pay at Counter option, which includes free modifications or cancellations at any time. Or, you can select the Pay Now option, and receive a saving for paying in advance. Until 1 July 2021, you can also cancel for free on Pay Now Rentals if you cancel at least 24 hours in advance of rental collection. www.avis.co.nz