Flying across the yawning girth of Australia, on multiple occasions, I’d lulled myself into a false complacency, that the continent’s interior was just one Big Empty. But there are vast pockets of inland wilderness that certainly offer the visitor more than just a sand storm in the desert to break up the monotony.

The Kimberley is a marquee specimen, widely billed as one of the world’s last great wilderness environments. It’s majestic, unforgettable, awe-inspiring and formidably remote. Book-ended by Broome and Kununurra, this extraordinary natural world is sandwiched between ocean and huge, inhospitable desert. To illustrate the impressive dimensions of this largely untamed region, you could fit three Englands’ inside The Kimberley, which is also one of the most sparsely populated regions in the world, home to just 25,000 residents, most of who are Aboriginal.

Over the course of ten days, my guided holiday with AAT Kings clocked up over 3000km, charting a course from Broome to Darwin. As much as I love the liberation of a roadie, traversing the Kimberley as a self-drive struck me as a most unappealing proposition. The profoundly big distances and long drives to get from place to place would knock the stuffing out of you. So I was more than happy for someone else to do the driving on the remote highways and dusty,corrugated tracks that lace the region, while I soaked up the sights.

The unfolding landscape is surprisingly diverse and ever-changing, where arid tracts of flat baked-earth and its red pindan soil yield to verdant savannah woodland and tropical grassland; there’s oasis-like wetlands, aflutter with stunning birdlife, sprawling cattle stations, and towering sandstone ranges sliced and diced by gorges, where rivers rage in the wet season, flooding everything in its path.

Loosely sectioned into two sub-regions, West Kimberley unfurls its manifold glories on eastward track from Broome to Halls Creek. After a rustic morning tea break at the Willare Roadhouse, where the rusty-red sandy soil fanned across the forecourt, and 82-tyred, 50-metre long road trains pulled in to refuel,  we soaked up the eye-popping sights of Derby. Pinned to the edge of the Northwest Continental Shelf, at the base of King Sound, Derby has the unique distinction of turning on a waterworks spectacle of staggering proportions. Derby has one the world’s highest tidal ranges, where water levels rise and fall by a colossal 11.5 metres. The best place to ogle this marvel of nature is the Derby jetty, a sweeping circular-shaped pier, constructed on extremely high stilts.

I fast became infatuated with the Kimberley’s trademark tree, the Boab, an ever-present sight across the region. They can live for 1500 years, making them Australia’s oldest living being. As you’d expect from an ancient creature, every tree seems to assume its own quirky character. They are highly sculptural trees with stout belly-like trunks that look like swollen water bottles, while their crazily-shaped twisting branches spawn fat boab nuts, the size of duck eggs.

Their back-story is fascinating, as it’s believed they descended from Madagascar, when boab seeds drifted across the Indian Ocean millions of years ago, to colonise the Kimberley. 7km out of Derby, we followed the signposts to the Boab Prison Tree, adjacent to the Gibb River Road turnoff. The Boab Prison Tree is a monumental, super-sized specimen, which has been dated as over 1000 years old. The hollow tree trunk has a circumference of over 14 metres and the door is a metre wide and two metres high. Shockingly, it was used as a "prison cell" in the 1890s by the local police, who would lock up Aboriginal prisoners overnight in the tree, as they were transported from across the Kimberley to the main jail in Derby. Dove-tailing with the raw drama of the landscape, there’s an inescapable sense of horror and tragedy ringing out from these ancient lands.

Our AAT Kings Travel Director, Delma, previously worked as a nurse in the Kimberley and provided some up-front, sobering insights into the appalling plight of the local Aboriginal people, today. Their communities are wracked by alcohol abuse, domestic violence and a severe diabetes epidemic, prompting a string of renal hospitals and dialysis clinics to be hastily constructed across the region.  “A people lost between two cultures, is how Delma put it.

In Halls Creek, I spotted a notice adorning a local hall with the details of a funeral being held the following day for a young man. The notice ended in bold capital letters – NO DRUNKS. Despite the deep-set social ills besetting the Aboriginal communities, there are signs of hope. Tourism is manifestly opening up more and more job opportunities for Aboriginal people, alongside the delivery of decent education.

We visited a particularly remote Aboriginal community school, home to the Yiyili people, a community of 250 people scattered across Louisa Downs who now own and operate the cattle station. Alongside the school, we admired the local artworks in Laari Gallery, a superb place to purchase an uber-authentic piece of indigenous art.

My runaway scenic highlight in the West Kimberley was encountering the blazing grandeur of Geike Gorge, at sundown.  The mighty Fitzroy River has carved a deep gorge into the remains of the ancient limestone barrier reef, which snakes across the west Kimberley, known as the Devonian Reef. During the wet season, the river rises over 16 metres, permanently staining the gorge’s vertiginous limestone walls, white.

Drifting through the gorge on a cruise, the water line bleaching was strikingly conspicuous. Visiting in June, early in the dry season, the river resembled a far more sedate ribbon of water, as we glided by the 30 metre high cliff walls, and the multi-coloured limestone strata. A frisson of delight regularly rippled through our group, when we spotted freshwater crocodiles sunning themselves, on the water’s edge.

The boat tours are expertly guided by Bunuba Aboriginal people, who provided fascinating insights into cultural richness of the gorge. But, nothing can compete with the blazing theatrical splendour of the lowering sun striking those cliff walls, seemingly setting them on fire – and the water, through its reflected glory. It’s a retina-burning spectacle to be savoured. 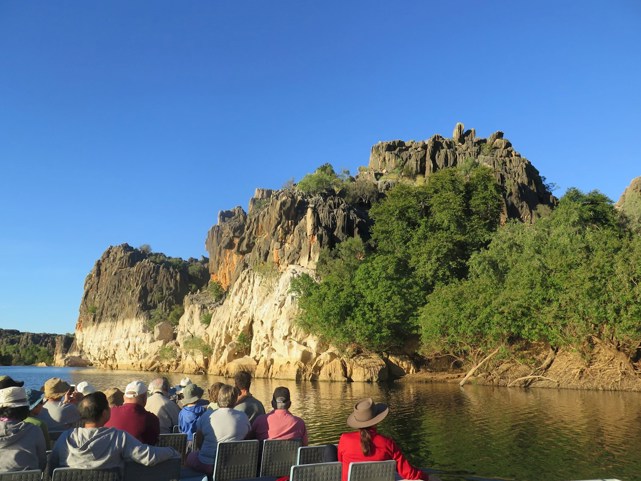 Just twenty minutes from Geike Gorge, we enjoyed an overnight stop at Fitzroy Crossing, just one of two towns in the 1000km stretch of West Kimberley. Situated on the banks of the Fitzroy, in full flood, this river morphs into one of the world’s largest, rising 13 metres in height. The river’s flood waters would fill Sydney Harbour in just six hours.

At Halls Creek , don’t miss snapping a shot of the fabulously carved statue in the town square. In 1885, Russian Jack was working in the Halls Creek goldmines and famously pushed his sick friend in a wheelbarrow 300 km through the Great Sandy Desert to Wyndham, which was the nearest town with a medical centre back in those days. His heroic, epic journey is immortalised beautifully in this elaborate bronze statue. Legend.

For more information on Western Australia, head to the official website. www.westernaustralia.com AAT Kings’ Wonders of the Kimberley Tour runs between Broome and Darwin. This fabulous ten day guided holiday delivers all the comforts as you prise open the treasures of the Kimberley region. www.aatkings.com

Qantas Airways wings the world to Broome, with most visitors arriving via the two hour hop from Perth. During the Dry Season (May to October), Qantas also operates seasonal direct services from Brisbane, Melbourne and Sydney. For best available fares and routes to suit, head to www.qantas.com