One of the great silver linings to the legacy of the Christchurch Earthquake has been Lyttelton’s elevated stature as a beloved gem in the city’s crown. Viciously battered by the seismic storm directly beneath the ground, the port town’s raffish, historic charm is still there in spades, but it’s overlaid with an effortlessly cool and creative ethos. It’s that grungy boho villagey spirit that’s gone ahead in leaps and bounds, post-quake. A great example of that is the fact that Lyttelton is a hotbed for New Zealand’s alternative folk-country scene, headlined by Marlon Williams, Aldous Harding, Mel Parsons and Nadia Reid.

The creative prowess positively purrs from potters and jewellers to green-fingered plant artists and a plethora of recycled-clothing boutiques. Bars and cafes advertise all manner of live gigs and poets, while Lyttelton is also very bookish, with a host of second-hand stores, including what is surely one of New Zealand’s best magazine shops– Leslie’s Bookshop, under the command of Paul Leslie. At last count, he stocks over 2000 magazine titles. It’s located at the base of the JD Bundy building, which is also home to the Lyttelton Coffee Company. How’s that for a winning combo! The café is Lyttelton personified: businessmen hold meetings at the stripped-back, rustic tables alongside heavily tattooed port workers with dreadlocks.

Just 20 minutes from the city centre, port workers and local artists co-exist amid the heady parade of spirited bars, eateries and eclectic retail offerings. Houses tenaciously cling onto the hillside at the most implausible angles while pint-sized and princess-pretty beaches necklace the harbour. Follow the winding road to the neighbouring communities of Rapaki, Cass Bay and Corsair Bay. As a kid, Sunday drives would often see my family whisk through the 2km-long Lyttelton Road Tunnel, which at the time was New Zealand’s longest road tunnel. (Auckland’s Waterview Tunnel now wears the crown.) It still feels trippy to emerge out of that long tunnel into the blinding daylight, as if you are emerging from the roading equivalent of a rabbit hole.

As the cradle of European settlement of Canterbury, one of the city’s toughest walks, the Bridle Path was constructed by the first settlers in 1850 to lead them over the Port Hills to their fledgling new settlement. Today, the Bridle Path doubles as a highly popular open-air gym, serving up unrivalled views across the Canterbury Plains to the Southern Alps, plus Lyttelton Harbour and Banks Peninsula. In the middle of the harbour, Ōtamahua/Quail Island, which was once used as a quarantine facility for people with leprosy.

At the same time as the lepers were confined to their one small bay, Antarctic explorers, Scott and Shackleton took advantage of the island to train their sled dogs and ponies before setting off on their ill-fated voyages. The inner harbour island can be reached via a 15-minute ferry ride from Lyttelton. During the summer months, Black Cat cruises operate a twice daily schedule. It makes for a great excursion, with a network of walking tracks aflutter with native birds and a ship graveyard. 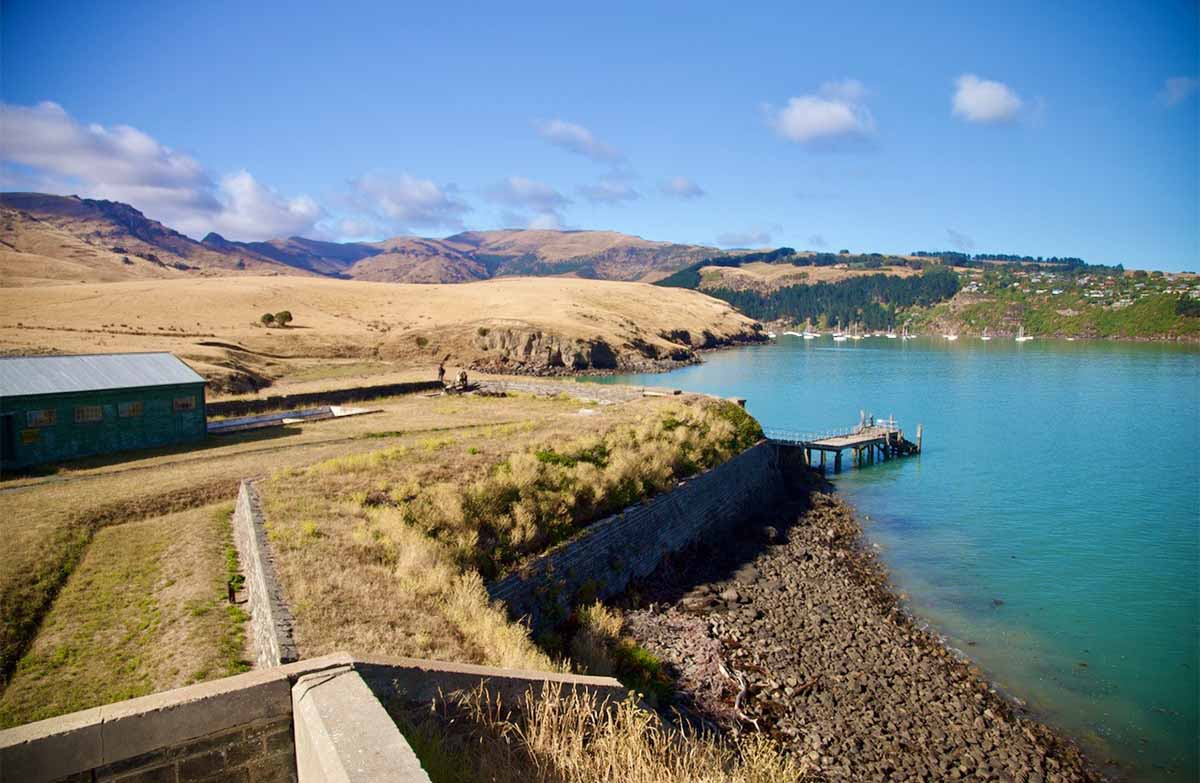 Another great island jaunt is to Ripapa Island. Tucked close against the southern shore of the harbour, Ripapa was an ideal site for a fortified pa for Ngāi Tahu and later, a fortress to defend against possible foreign enemy attacks. Its colourful history is remarkable, spanning a fortified pa and tapu burial ground, quarantine outpost, prisoner of war camp, and heavily-armed fortress to repel advancing Russian, Germany, and Japanese invaders. A marauding German captain, Count Felix Von Luckner, captured in the last days of WWI, was incarcerated on Ripapa for 109 days, and his signature can still be seen today etched into a wall of one of the island's buildings. Today, day-trippers can also admire the giant disappearing guns (that were never fired in anger), mazes of underground tunnels, torpedo stores, bunkers, and tales of skirmishes with the fearsome northern rampager Te Rauparaha.

Every Saturday, the town centre bursts into life with the buzzy Lyttelton Farmers’ Market. Arguably one of the nation’s best, as you bag some fresh buffalo mozzarella from Little River, super plump strawberries and jars of spicy salsas, there’s always a perky crowd grazing on the treats and taking in the live music. It’s the go-to for fresh produce and pantry staples from local growers and producers. Staged in London Street, this wonderfully characterful main street is unquestionably Lyttelton’s beating heart, throbbing with a quirky mix of gift stores, eateries, bookshops and record stores.

Henry Trading is the kind of store a quick browse can’t do justice to. The shop is loaded with gifts, candles, ceramics, natural body products, woollen goods, toys, kitchen tools, desk supplies and so much more. Threaded through this eclectic collection, is a commitment to selling items of quality and care, items that are made to last and made to love. Hello Christmas shopping. The award-winning Roots Restaurant no longer operates, but you can still experience the culinary wizardry of chef Giulio Sturla. Mapu is an experimental kitchen, not a restaurant. You'll be served in-season and locally-sourced food, cooked right in front of you by Giulio and how he devised the recipes, With up to only five others, this is a seriously intimate dining experience. There are no opening hours and no menu. Simply book you place on their website.

Another hot haunt is the Japanese Māori-inspired restaurant Super. Housed in Lyttelton’s oldest standing building down on Norwich Quay, Sahni Bennett takes dishes like steamed bao, ramen and donburi and incorporates them with local flavours of pūhā, horopito and kānga pirau.

An iconic launchpad for so many musicians and a legendary Lyttelton watering hole is Wunderbar. It’s probably one of the first bars I used to frequent, legally. Self-proclaimed as the weirdest, coolest little bar and live music venue in New Zealand, Wunderbar is a show-stopping sensory treat. With eccentricities covering every inch of wall space, including doll heads and planetary mirror balls, you’d struggle to find a venue that stamps a stronger impression. Every Wednesday is Open Mic & Jam Night. Get amongst it! Further afield, head down the harbour to Governor’s Bay, home to Ōhinetahi, a garden of international significance. Underpinning its acclaim is the fact that Ōhinetahi incorporates magical garden displays, architectural works, art and sculpture. But the gardens have a special significance, dating back to 1865 when then-owner and keen botanist Thomas H Potts began planting them. In 1976, Sir Miles Warren, his sister Pauline and her husband John Trengrove bought the property.

After restoring the ramshackle 19th century homestead, the three set about establishing a grand garden. As a respected artist, Pauline Trengrove, combined her talents with the two architects. What a trinity. Over the years, the garden has expanded, taking in a woodland walkway across a swing bridge and accommodating over two dozen contemporary sculptures. Get lost in a maze of perfect hedges, beautiful roses and native planting. The gazebos and serene settings create dreamy fairy-tale vibes and early summer sees the gardens at their blazing best. www.christchurchnz.com