Need a break from the beach in favour of the elevated glory of the Gold Coast hinterland? Take your GC adventures next-level, by staying a night at O’Reilly’s Rainforest Retreat, nestled in the exalted splendour of Lamington National Park. Five generations of O’Reillys have lovingly operated this radiant highland enterprise since 1911, on the edge of a Gondwana rainforest, in the World Heritage-listed Lamington National Park. The resort has many eco firsts under its belt. Co-founder, Mick O’Reilly (1892-1979) was Queensland’s first paid park ranger, paving the way for the resort’s prime focus on appreciation for nature, sustainability, education and the sourcing of local produce. In 1987, the family opened Australia’s first tree top walk, 180m long and 15 metres above the rainforest floor, to provide visitors with a bird’s eye view of the rainforest. The walk is made up of nine suspension bridges. It was a thrill to take a ramble on this suspended trail – the trail-blazer for many subsequent operations across Australasia. Laced in a wealth of stunning trails, another personal favourite is Morans Falls track. It descends 140 metres through a sub-tropical rainforest of booyongs, figs and brush box to Morans Falls Lookout. I adore Booyong trees, one of the largest buttressed trees in the rainforest. The lookout was the site of a bark hut, the first home of the O’Reilly brothers when they arrived on the mountain.

The resort is renowned for hearty home cooking. Its menu reads: “We believe that food brings people together, a time for families and friends to share experiences and connect in a lively place. We care about what we put on your plate, we source our produce locally; and we bake our own breads, pastries and pizza bases daily right here.” The signature dish for two is worth ordering: a hearty serving of slow cooked lamb shoulder with pumpkin, chats, balsamic shallots, beetroot crisp, minted jelly and pan glazed gravy and mustard. I also recommend their salivating Potato Gnocchi with broad beans, cherry tomato, peppers, tomato and cream sauce. Don’t miss afternoon tea – where the most delicious lamingtons are aptly served, in Lamington National Park. 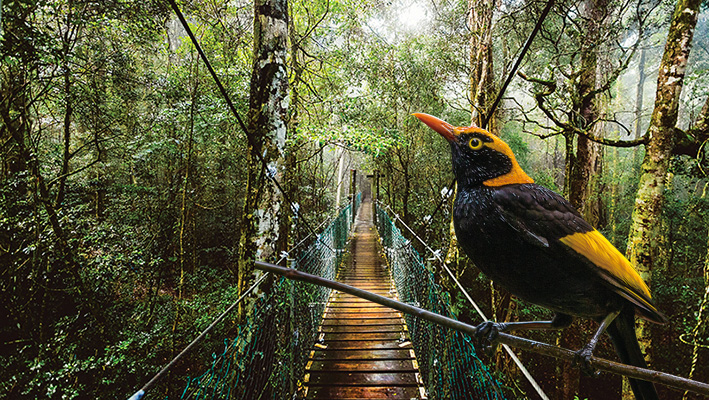 Before heading up to the lofty heights of the retreat, be sure to pop into O’Reilly’s Canungra Valley Vineyards, at the base of the range. It’s home to eight acres of vines, wrapped around an 1800’s Cellar Door homestead beside Canungra creek. It’s a charming place for families to order a picnic or take the on-site alpacas for a leisurely walk. Many of the wines are named after family members. From there I was retreat-bound, threading my way through the forest, where the ancient trees seemingly encroach on the road and are strapped with reflective warning signs. Weaving through the forest, enrobed by mighty specimens like Antarctic beech trees, eucalypts and booyongs, it’s not a dissimilar experience to road tripping through the mighty redwood forests of California, on the famed Avenue of the Giants.

History oozes from every pore at O’Reilly’s Rainforest Retreat, beginning life as a dairy, 110 years ago. By the time the cream made its way down the boulder-strewn track to Canungra, it had frequently churned into butter. The first paying guests were welcomed in 1926. Within a matter of decades, the original homestead transformed into a tourism hub that would go on to lure generations of Aussies and international travellers, curious to learn about the rich biosphere on its doorstep. The story of O’Reilly’s Rainforest Retreat is a remarkable tale of bold pioneering spirit, old-style country hospitality and a resilient family vision. In the five generations since the first family arrived at the national park, the O’Reilly’s have been hit by challenges: war, fire, cyclone and now COVID19. 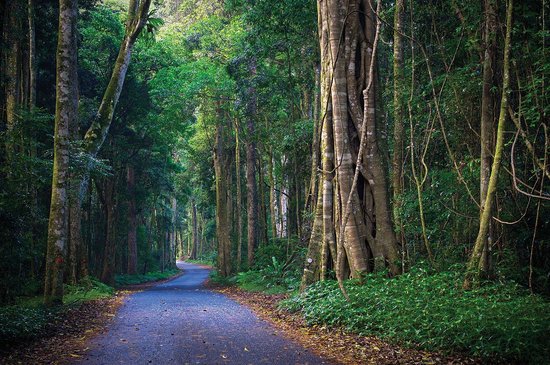 In 2019 as the embers of the worst bush fires on record were hosed down on the adjacent Binna Burra resort, the O’Reilly’s posted a note to their neighbours: “If there is one thing our forefathers

taught us is that we are strong and resilient. We know that once the dust settles you will rise from the ashes and rebuild in our beautiful part of the world. Neighbours are always there for each other in a crisis, so if there is anything O’Reilly’s can do to help now or in the future please reach out”. Ringfenced by a tract of wilderness that pre-dates the dinosaurs, O’Reilly’s Rainforest Resort is a drawcard for bird and nature lovers. Appropriate given there are more than 160 species of sub-tropical birds, a daily bird feeding program, a Bird of Prey show and no less than a ‘magnificent seven’ birds to tick off the twitcher list. The seven most coveted birds to sight are the Noisy Pitta, the Marbled Frogmouth, Paradise Riflebird, Alberts Lyrebird, Regent Bowerbird, Olive Whistler, and the flightless Rufous Scrub Bird.)

As a further feather in the resort’s cap, in 1978 Peter O’Reilly founded a bird watching club that is still going strong today and attracts twitchers around the world. I was awestruck by the variety of fluttering and feathered friends in close proximity to my accommodation and on the retreat’s grounds. Regent and Satin Bowerbirds, and Green Catbirds appear daily at feeding trays beside the dining room. Crimson Rosellas and King Parrots wait in nearby trees to ambush you if they suspect you are carrying food. Lewin’s Honeyeaters, Eastern Spinebills and Superb Fairy-wrens are common in the gardens within the guesthouse grounds, while Australian Brush-turkeys are the gluttons always lurking in the picnic areas. If you’re up for a heart pumping hike, strike out along the famous Stinson Track. In 1937, a Stinson Model A Airliner crashed into the surrounding McPherson Ranges killing five of the seven people on board. Bernard O’Reilly set out to find the wreck of the “City of Brisbane” Stinson Model A airliner some nine days after it went missing and a massive RAAF rescue had been mounted. Bernard’s curiosity got the better of him and after reports circulated that the plane had been spotted flying low and heavy over nearby farms, he tapped into his bushcraft and geographical knowledge and scrambled across rugged terrain and thick forest between 2000 and 4000 feet above sea level, in search of the plane.

Ten days after the crash, he followed the faint bush rescue signal, a cooee cry of a survivor, and came across two injured passengers, noting the other five had perished. After feeding them and sharing the cricket score (Bradman was 165 not out, the survivors were marginally happy), he mounted a rescue mission that saw him work around the clock for two days, helping to carry the men out of the jungle. Bernard was awarded the Albert Medal award for courage. A replica of the Stinson aircraft used in the movie is proudly positioned at the retreat.

Sustainability runs deep in the DNA of the O’Reilly family. Even before they first patched an eco-trail along the floor of the ancient Lamington National Park to link their resort with neighbouring Binna Burra Resort, they focused on nature and education tours with a skew to sustainability. Current CEO Shane O’Reilly says the three most popular activities today are the glow worm walk, the flying fox and the Segway tours. “The glow worms were there in 1926, and we’re still taking people there every night to see them, that’s a great story of sustainable tourism.” This eco-tourism leader had put the “eco” into tourism long before the phrase had even been coined. 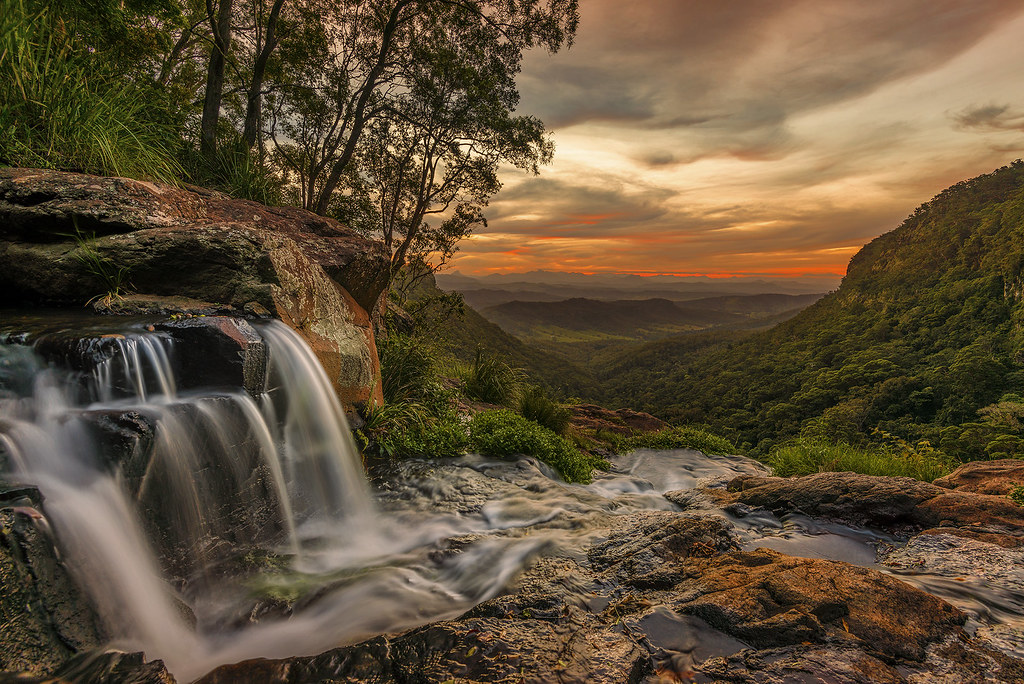 The retreat boasts a wide array of accommodation options to suit all budgets, but if you want to push the boat out, you’ll be in seventh heaven in a valley view villa. My two bedroom villa was blissfully self-contained, super spacious and air conditioned, sleeping up to seven people in fully en-suited bedrooms. The expansive deck boasts a BBQ and spa bath, with dreamy rainforest and valley views. Don’t miss the masterly infinity pool, nestled below the villas, for a killer sunset. O’Reilly’s Rainforest Retreat is the unrivalled cherry on the top of a Gold Coast getaway. Elevate yourself 1000

metres above the glitter strip for a cool and revitalising change in the cradle of storied Queensland hospitality. www.oreillys.com.au

From theme park thrills, golden beaches and the birthplace of bikinis to the ravishing world heritage-listed beauty of the hinterland and ancient rainforests, start planning a great getaway to the Gold Coast. From the glitter strip of Surfers Paradise to the mountain villages and forest trails of the Scenic Rim, the Gold Coast bursts with a world of possibilities. Make your first stop, the region’s official website. www.queensland.com