Remote, rugged, immense and wreathed in mist and mysticism, Te Urewera is the home of the Tuhoe people. Revered for its lakes and forested beauty, Lake Waikaremoana (Sea of Rippling Waters) is just the first of many highlights, a deep crucible of water encircled by one of New Zealand’s Great Walks. Across Te Urewera Forest, the terrain resembles a vast and undulating green korowai, mantling countless ridges, where some mountains slope steeply while others are crumpled like used tissues. Beech forest dominates the southern end, while rimu and tawa are predominant in the north. Departing at the crack of dawn from Whakatane, Dermott from the local council and I ventured to Murupara’s DOC visitor centre, our staging post for a wondrous day in the Te Urewera wilderness.

Horses neighed in the fresh morning air as we threaded our way through eastern Bay of Plenty’s velvety emerald landscape to reach the timber town of Murupara. We met up with Hinewai McManus from Te Urewera Treks, our exceptional host and guide, who would keep us enthralled all day. First established by Hinewai’s uncle 14 years ago, Te Urewera Treks is a remarkably striking eco-tourism business, born from the desire to create employment for the local area and inspire the next generation by demonstrating how an indigenous owned and operated business can flourish. 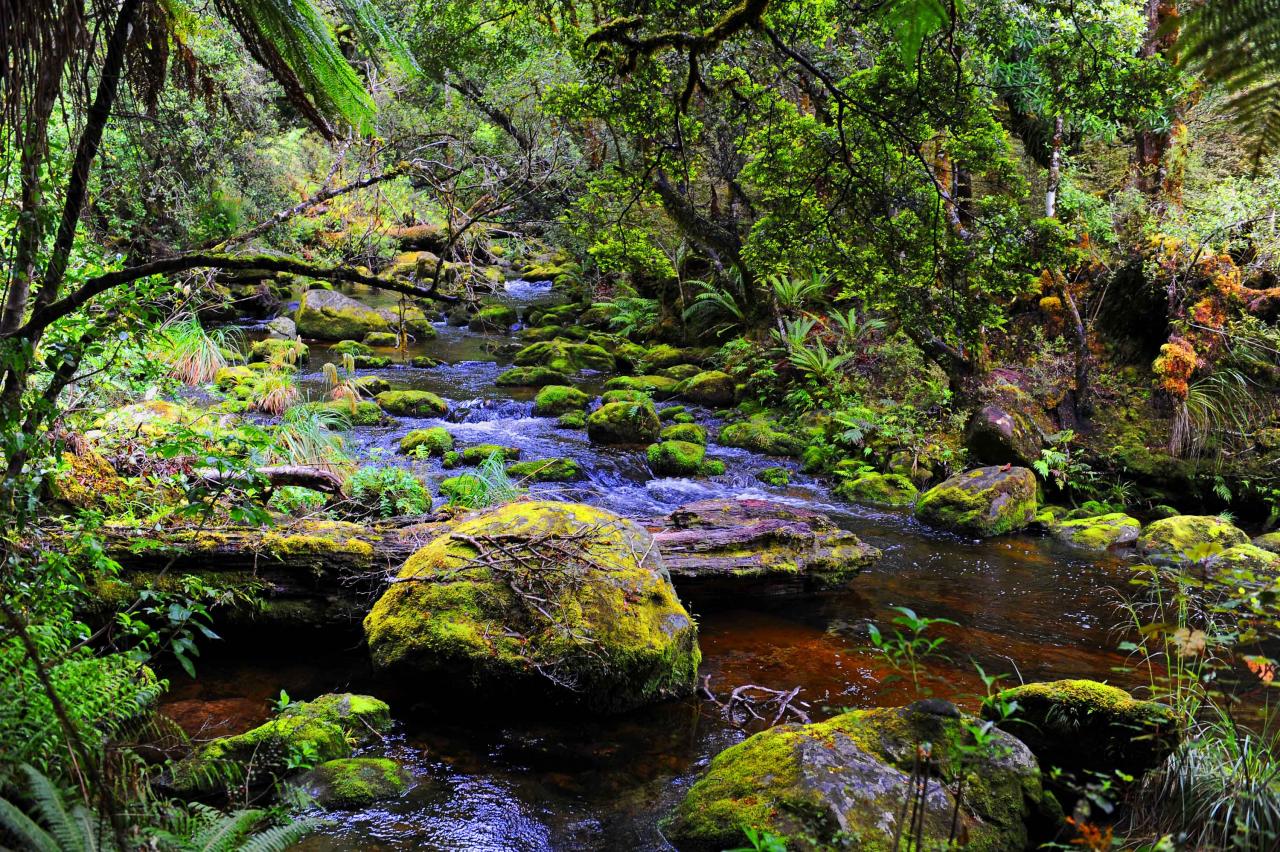 The business is now managed by Hinewai who was tramping in Te Urewera from a very early age. At 3 weeks old, she was carted off to the bush in her mother’s rain jacket. The wilderness is still her natural calling, living largely off-the-grid within the forest. As a former DOC ranger of Tuhoe descent with a deep reverence and commanding knowledge of history, nature and culture, this effervescent, endearing wahine is ideally equipped to be at the helm of this guided walk business.

Six years ago, Te Urewera ceased being a national park with Tuhoe assuming legal guardianship of this living entity. Tuhoe’s back story is compellingly unique. They were not affected by the arrival of the Crown at first, they weren’t signatories to the Treaty of Waitangi and didn’t have contact with the Crown. But all that changed later in 1865 when the government commenced land confiscations. The name Te Urewera has the capacity to make you blush or feel slightly uneasy. The name translates as ‘The Burnt Penis’. It originates from the tale of a Maori chief who died after rolling over in his sleep while lying too close to a camp fire. Ouch! Extending from northern Hawke’s Bay to eastern Bay of Plenty it’s a monumental swathe of hinterland.

Hinewai is eager to see more Kiwis discover the spiritual secrets and scenic delights of Te Urewera, its wild beauty, untouched native forests and intricate network of uncrowded tramping tracks. Pre-Covid, fewer than one per cent of her guests were from New Zealand. Germans flocked here in their droves. Hinewai has a deep sense of manaakitanga, she’s instantly engaging and throughout the day, kept us engrossed with easily digestible insights into the region and its people. She didn’t hesitate to speak her mind about tribal politics, believing the far-flung tribal area is too large to have its power base centralised in Taneatua. She wants the decision-making devolved to the five rohe. I was also intrigued to learn that there are still many original tracks within Te Urewera that pre-date roads.

One takes you all the way from Waikaremoana to Gisborne. Another will take you from Ruatahuna to Whakatane. Speaking of roads, there’s a huge focus on sustainability. Tuhoe are working on a ground-breaking eco-friendly initiative in which their gravel roads will be sealed in a tree pulp surface. Setting off from Murupara, right on the cue, wispy clouds of mist rose, clung onto and shrouded the forest as we made our way on Te Urewera Rainforest Route to Whakatau rainforest retreat, base camp for Te Urewera Treks. As the name would suggest, this bush camp site is nestled among native trees, complete with glamping options, if you want to overnight here. ​The Tuhoe people are famously known as the 'Children of the Mist' in reference to the tradition that they are the offspring of Hine-puhoku-rangi - the celestial mist maiden.

They believe they are product of the forest. Enjoying some freshly brewed Kawakawa tea, Hinewai invited us to plant a native seedling in an area of bare land on her site. Tuhoe traditions run strong and every activity begins with a prayer. As Dermott and I prepared to pluck a seedling from the forest to plant in the cleared area, Hinewai encouraged us to surrender to the forest, confident that we would be naturally drawn to the right seedling to dislodge from its floor to relocate.

After feeling suitably lured to a lancewood, Hinewai encouraged me to grab hold of it assertively and pull it out. If it released itself from the earth effortlessly, my intuitive communion with the forest was functioning, she told me. Thankfully, little Mr Lancewood released himself from the earth without any fuss. I’ve always been impressed by lancewoods, or horoeka. This is the native plant that evolved to outsmart the moa, changing its colours and shape as it grew, tricking the big flightless bird and saving the plant from becoming a snack as a sapling.

We headed to Ruatahuna for a fabulous lunch in the General Store, complemented with fiendishly good scones, freshly made by the local aunties. There’s a wonderful gallery of local art and craft to peruse, while the locals are very excited that a petrol station has recently been established as part of this superb community hub. A gorgeous new cluster of accommodation chalets have also recently been constructed, if you want to use Ruatahuna as your base for exploration.

Hinewai led us into the forest behind the general store, where she recently helped build a dedicated walking trail through the woodland, so that local elders can still engage with the forest without much effort. The afternoon was spent in the truly magical Whirinaki Forest, walking under fully mature podocarp trees, planted by nature hundreds of years ago. Hinewai shared more legends with us about the role the trees have played in the creation according to Tuhoe. Standing shoulder-to-shoulder with these primeval and ancient giants is an awe-inspiring experience. The Japanese refer to spending time walking the forest as “forest bathing.” It’s a very apt description, for its restorative properties. For Tuhoe, this domain is the essence of life. The forest was abuzz in birdlife, diverse and abundant, spanning North Island brown kiwi, red and yellow-crowned kakariki, kereru, the North Island kaka and the endangered karearea (New Zealand falcon).

An outstanding circuit is the Sanctuary Track, an easy loop track that crosses the Minginui Stream and delves deep into remnant podocarp forest. You can also walk it at night as the Whirinaki Night Life Walk, immersing yourself in the sounds of the forest creatures that venture out after dark. Glow-worms glow brightly, morepork beckon with their signature call and at the top of the track, you can often hear kiwi singing out to each other. English botanist David Bellamy described the Whirinaki as 'one of the great forests of the world.' You’ll soon be nodding in agreement.

Te Urewera Treks is heavily invested in Te Urewera Rainforest Restoration Project, responsible for planting thousands and thousands of trees, funding their maintenance and pest control. It was such a pleasure to help the cause by planting my lancewood. Playing your part accords you the status of Kaitiaki Tautoko, or honorary guardian of the forest. I do love travel with purpose.

Hinewai and the team at Te Urewera Treks operate a variety of soul-stirring experiences in this blessed pocket of Aotearoa, boasting the largest area of native forest remaining in the North Island. You’ll come away from this historic hinterland, this world unto itself, with a profound sense of respect and reverence for Te Urewera, its people, its spell-binding beauty…. and those mists. https://www.teureweratreks.co.nz/

Bay of Plenty is packed experiential options for every traveller. Make your first port of call the region’s official website. www.bayofplentynz.com