Gazing across the cinematic good looks of Hurunui’s Gore Bay, a shape-shifting spiritual force was seemingly stamping its mark on the coastline. A humdinger blanket of sea fog was unfurling its ethereal beauty at dawn, as the sun assertively poked its head through the ruffled duvet. The headland was soon consumed by plumped-up pillows of cloud, while long and slender fingers of mist coiled around the curves of the cliffs, like more delicate, artful phantom. It was a spell-binding spectacle to start the day from the pampered surrounds of Cathedral Cliffs Bed & Breakfast.

Standing atop the towering sedimentary rock cliffs at the south end of Gore Bay, this enchanting accommodation experience should top your check-list in these parts. Hosted by Colin and Lynne Harrison, this charismatic couple took possession of the property over a decade ago and will treat you royally, with a laid-back, charming and easy manner. Super-boutique, there are two spacious ensuites to choose from, The Queen Suite and The Bedroom Suite, with a sumptuous fully cooked breakfast available too. (Much of the fruit and jams are sourced from the orchard.) Plump for the larger Queen Suite, loaded with creature comforts and accentuated with a large private deck overlooking the orchard and the sweeping ocean. I felt like I was on the edge of the world, wrapped in botanical splendour. As the sun steadily burnt off the lingering morning mist, I gazed down at the deep blue ocean wondering if I had magically transported myself to the Amalfi. The verdant setting and steep-sloped coastal outlook is uncannily similar – complete with citrus trees bursting with fruit. Crowning the cliffs above Gore Bay and Port Robinson, the property’s 2-hectare garden thrives in its unique and undulating microclimate. First developed in the mid-1990s by the previous owner, Murray Elliot, the garden is a showcase of rhododendrons including rare unnamed varieties that he bred.

Fully protected from southerly and easterly winds, the frost- free microclimate has enabled some plants to reach 7 metres high. Sprinkled around the garden, roses flower almost all year round, while the perennial beds add to the pageantry. The array of plant varieties is astonishing, from bulbs, to camellias and graceful magnolias. Sun-loving and drought tolerant succulents, agaves and proteas are in seventh heaven here. “Flourishing” doesn’t even begin to the describe the resplendent size of their cliff-hugging proteas. Autumn’s mellow fruitfulness was in full blaze in their extensive orchard - the fruit trees were positively groaning in sublime citrus, apples and avocados. 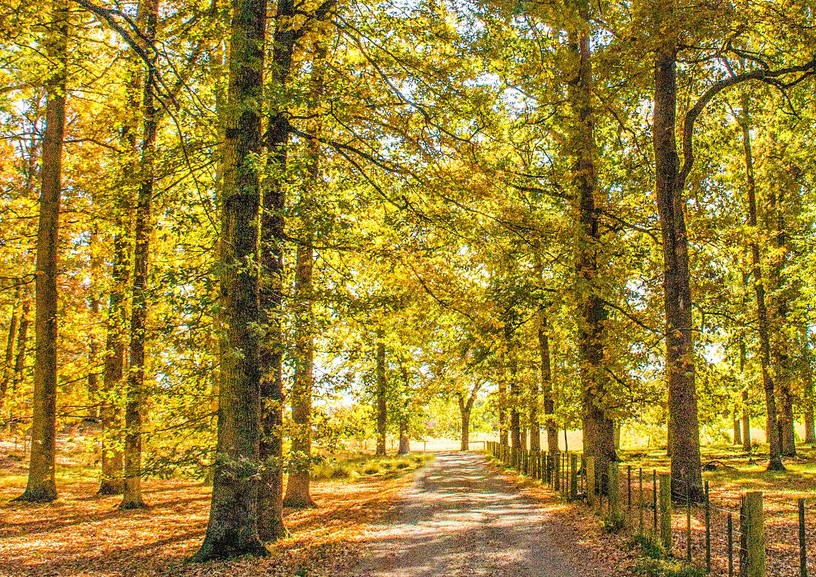 Lynne eagerly implored me to fill up a bag of fruit to take home. Hell yes! My freshly picked lemons and Reed avocados are absolutely irresistible. Before you leave, be sure to try your hand at hitting a golf ball over the pond on to the high ground putting green that Colin has artfully designed. Alas, it wasn’t a hole in one for me! Cathedral Cliffs B&B is an elevated oasis fit for the gods, underpinned by Lynne & Colin’s delightfully disarming country-style hospitality. A stay here will linger long as a holiday highlight. It’s a next-level experience on the Gore Bay Tourist Drive – and it won’t break the bank! www.cathedralcliffs.co.nz

Heading up from Christchurch on SH1, I turned off at Domett to commence my romp around the 21km tourist drive circuit. It’s your classic detour. Before reaching Gore Bay, head down to the Hurunui River Mouth, doted over by trout and salmon fishers. The views alone are stupendous, as the river winds through the beach to reach the ocean, backdropped with crumbling golden clay cliffs. From here, I struck out on the Manuka Bay track, a 3km-long walk, embracing the coastal elements. Taking about 90 minutes to knock-off (each way), you’ll encounter a cross-hatch of scenic treats, from the striking Hurunui Lagoon and lush broadleaf forest to fern-filled gullies and regenerating mānuka forest – all backdropped by the big blue ocean. From the unruffled solitude of Manuka Beach, I then tootled along the coast to size up the remains of Port Robinson.

Named after William Robinson, he was at the forefront of nineteenth century pastoralists and the self-sufficient pastoral kingdom of Cheviot Hills. Better known as ‘Ready Money’ because he usually paid in cash, alongside developing his great estate of Cheviot Hills, he built the Hurunui Bridge and the Port Robinson slipway. Echoes of his legacy are ever-present in these parts. His incredibly ambitious slipway on such an inhospitable coast enabled ships to anchor in the lee of the headland, while boats carried the wool clip to them, from the slipway. Today, the remnants of that daring slipway can still be seen, after a gnarly ten minute walk down the hillside track to the cove. The main trunk railway line from Christchurch finally reached Domett in 1907, rendering the “port” redundant. Back on the road, I drove down the hill to soak up the simplistic, timeless charm of photogenic Gore Bay. The money shot is undeniably at Cathedral Cliffs lookout, serving up drool-worthy views of this sprawling eroded siltstone and sandstone formation, conjuring the grandeur of a cathedral with its grand assembly gothic-like fluted columns. It’s a star specimen of badlands-style erosion. When the rain falls, the gravel layer at the top protects the softer sedimentary layers directly below from being eroded and washed away, allowing these vertical rib-like formations to take shape. It’s a view to take your time over as you marvel over nature’s dramatic artwork.

With a classic Kiwi beach vibe, Gore Bay is renowned for having the most consistent surfing in Canterbury, a very safe swimming beach, and it’s laced with fabulous walks. At low tide, you can walk to Port Robinson from the beach at Gore Bay. Ready Money built his wife, Eliza Robinson, a summer cottage here in 1867, enabling her to take the sea air when his mates arrived at the homestead for mannish pursuits. It’s uplifting to see this historic cottage looking so well-maintained. A superb walk is the Tweedies Gully Track, which zips you through rich broadleaf coastal forest featuring five-finger and kawa kawa, serenaded by bellbirds and fantails, before topping out at an open lookouts with enormous views of Pegasus Bay and the ravishing topography. You’ll also get some close-up perspectives of those legendary Cathedral Cliffs from the bottom of this canyon. Recent heavy rain has caused some damage to the track, so follow the detours.

Complete the circuit by driving around to Cheviot. I adore the Ready Money Trail, a recently developed walking track within the wonderful woodlands of Cheviot Hills Reserve. Great drifts of golden leaf fall are just cracking into life for their seasonal outing, while in spring, the woodlands would make William Wordsworth blush, ablaze with daffodils. The 50 hectare reserve was originally owned by William Robinson who planted an eclectic range of English, European and Australian trees in the 1860s’, most of which are still standing today. He also set out miles of hawthorn hedges, part of which still survive around Cheviot. The remains of Robinson's stables and even the concrete foundations of his acclaimed 40-room mansion, that burned down in 1936, can be found in the reserve. The mansion's original front steps now support a small cricket pavilion, while the manager's house and the estate’s original bell tower are now in private residence, on Gore Bay Road, close to the reserve. Follow the 3km-long track around the reserve and get a sense of the backstory from the sign-posted historical sites along the way.

Whether you’re sampling wines in the coolest little wine region of Waipara, marvelling over limestone landscapes, soaking in thermal hot pools, recharging yourself on a high country farm-stay or blazing the magnificent coastal and forest trails, the Hurunui District is primed for indelible