Beyond the gleaming necklace of beachfront delights on the Sunshine Coast, elevate your playground to the hive of hidden and flavourful gems lurking in the hinterland. From Mooloolaba, I tracked my way to Nambour for an obligatory photo-stop with the iconic king of Queensland kitsch, the Big Pineapple, before following the signposts on the Blackall Range tourist route. The brown Highway 23 signs waymark the official sightseeing route. Back-dropping the Sunshine Coast, the tourist drive winds along the razorback ridgeline of the escarpment, knitting together a spree of highland villages, scenic reserves and lofty lookouts. You can tailor the touring circuit to your schedule, but the sheer profusion of attractions is astonishing, from quaint little towns and rainforest walks, to sublime waterfalls and jaw-dropping lookouts, studding the route.

For a short and sweet forest walk, I headed to Mapleton Falls National Park. The 1.3km Wompoo circuit is a fragrant jaunt through verdant rainforest, heavily scented with eucalypts, to Peregrine Lookout where the gushing curtain of Mapleton Falls and expansive views across the Obi Obi Valley unfurl for your viewing pleasure. To work off any excess indulgence, (there’s a lot of fudge shops in Montville) take a rainforest hike to Kondalilla Falls, complete with swimming hole for a revitalising dip. Many highland communities in these parts, first developed as farming bases, evolved into hippie strongholds in the 1960s, before reaching the stature of solid creative hubs in the 1970s. Montville is an undeniable rock-star of a highland village, richly textured by an incredibly creative class of people, bursting with colour, character and vitality. 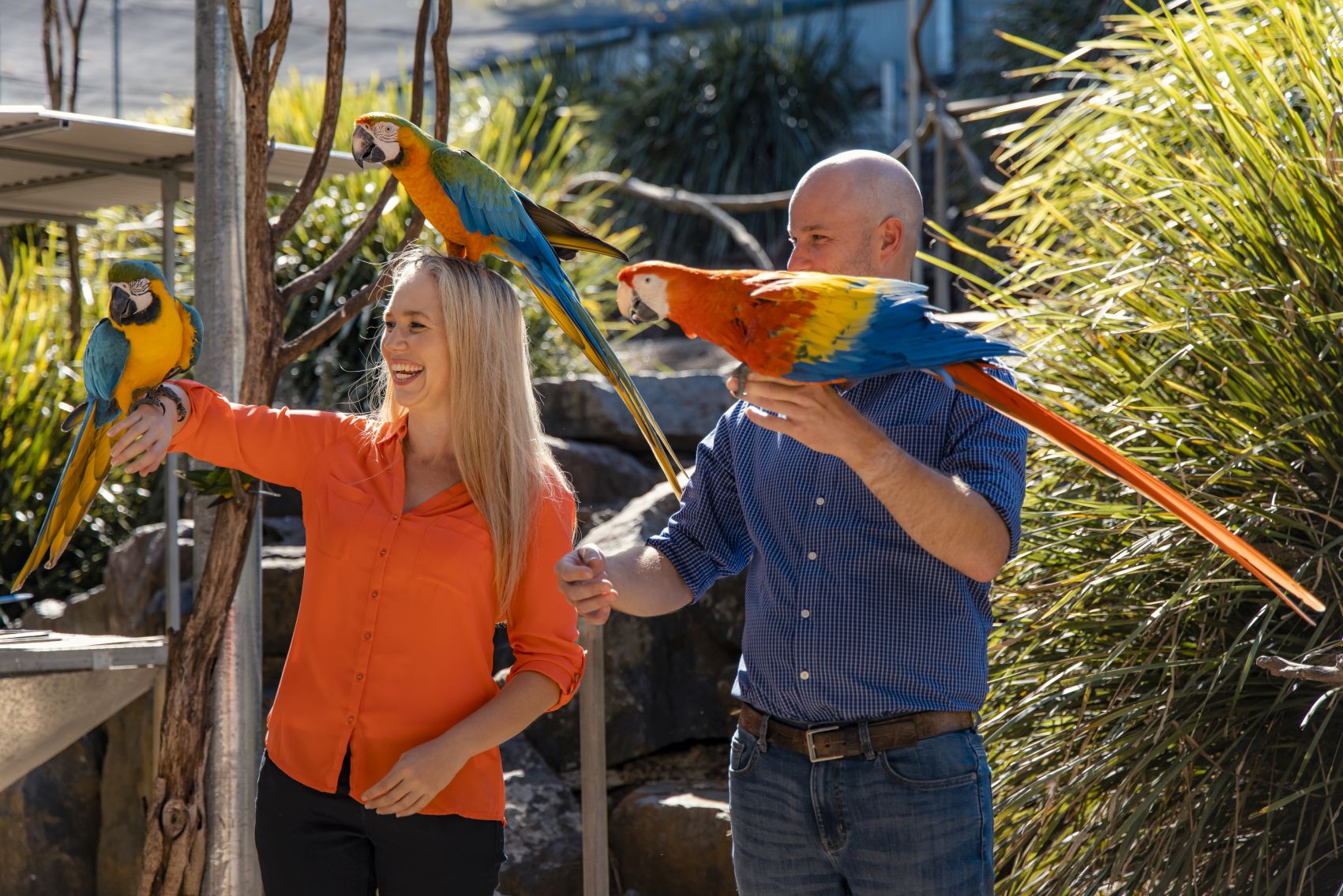 The town began life under the bold name of Razorback, which is readily illustrative when you reach the 500 metre-high ridge-top location of the town. If you’ve never been to Montville, you’ll be swept up by its storybook charm complete with watermill, chintzy cafes, cosy craft cottages and leafy serenity. Tenaciously clinging to the eastern escarpment, this picture-postcard village offers dress circle views across the softly folded valleys and lush green pastures, tumbling towards the coast. There’s an inescapable sense of magic to Montville, with main street stores brimming with curios, treasures and confections, like a readymade toy town tourist mecca.

You’ll swoon over the Clock Shop Montville, housed in a German chalet that looks like its shuffled out of a Brothers Grimm fairytale, ticking and tocking with several thousand time pieces, from authentic Black Forest cuckoo clocks, German mini clocks, majestic grandfather clocks and music boxes from floor to ceiling. Mercifully, all of the clocks are set to different times. Check out Illume Creations, home to Tina Cooper’s vibrant hand blown glass art, particularly sculptures and vases. For a riveting display of local works all for sale, a must is the Montville Art Gallery, housed in a characterful 1890’s Queenslander on the main street.

There are over 40 artists on permanent display. The gallery owner, Wayne Malkin, is an acclaimed seascape, landscape and portrait artist who specialises in oils. His ocean and hinterland landscape works are drool-worthy, strongly representing his passion for the playful effect of light. Travelling with kids? It would be a very sour note to deprive them of a visit to Candy Addictions, home to Australia’s hottest selling rock candy. The butter macadamia and mango rocky candy are really good. Coffee and cake? Look no further than the legendary Poet’s Café, strikingly constructed like a conservatory-style tearoom, festooned with stained glass windows and renaissance-style portraits. They’re very proud that their coffee is made from fresh spring water bubbling up from the natural spring below the premises. Another superlative perch to soak up the panoramic views overlooking the escarpment is from the balcony of the Edge Restaurant. 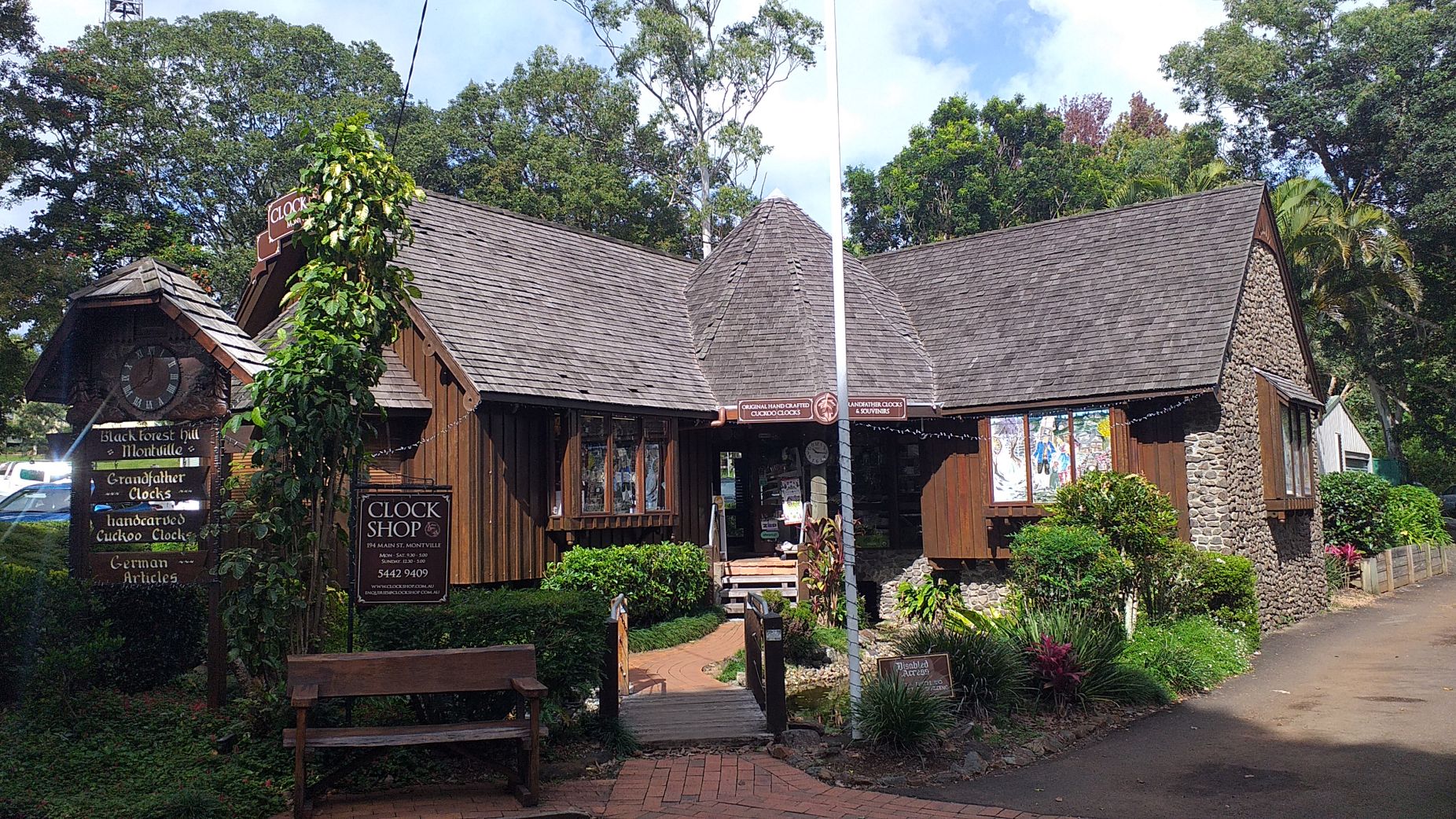 After gorging lustily from Montville’s manifold seductions, I moseyed on to Maleny, which enjoys an even loftier perch than Montville, bracketed by lush and rolling green hills. Maleny is like a microcosm of the hinterland’s finest features, a blend of creative types, aging hippies, a thriving artisan food production scene and magnificently bucolic beauty spots. Given its drop-dead-gorgeousness, Maleny is a perennially popular wedding destination and also hums as a hot-ticket wellness hub. Renowned for its bountiful produce and award-winning dairy, the artisan temptations overflow. Maleny Street pops with colour and personality, brimming with organic cafes, brilliant bookstores, eclectic boutiques and quirky independent stores.

There’s also a strong co-op ethos in Maleny, recently reputed to having the second most co-ops per person in the world. I highly recommend a visit to Maleny Food Co, a distilled version of Maleny’s abundance. A destination in its own right, the café and deli began life over 20 years ago, as Colin James Fine Foods, and is under the helm of Norman and Kate Scott. Starting out as a café and fromagerie, this insatiably popular food providore is also synonymous for its gelato and sorbet, made daily on site in traditional artisan style. Constantly scooping awards, you won’t find better a scoop on the Sunshine Coast.

Starting with a daily collection of fresh Guernsey milk and cream from local family farms, the best quality milk and environmental sustainability is at the core of their operations. Made in small batches at their gelato shop, Maleny Food Co churns rather than whips the base to produce the perfect rich and creamy texture. They then hand stir only pure and simple fresh ingredients to create wickedly delicious flavours and award-winning products. With over 100 gelato flavours, you’ll just drool over the possibilities, from Coconut & Ginger and Fig & Almond to Bubblegum, Sticky Date and Turkish Delight gelato. I grazed heartily and was particularly struck by the Blueberry & lavender gelato. What a combo. The formidable array of fromage is equally alluring, with Maleny Food Co sourcing the finest Australian and international cheeses made by artisan cheese makers and maturing them in their fromagerie. Undeniably one of Australia’s premier cheese shops, they boast more 250 cheeses, including favourites such as Brie, Swiss, French and Raclette cheeses, as well as a range of gourmet cured meats and fresh organic pâtés. I munched my way through a tantalising range of cheeses including Kenilworth Vintage Cheddar, Bleu d’Auvergne and Woombye’s decadently gooey Triple Cream Brie. You can dine instore from the deli-style menu,or simply whistle up a picnic box.

I feasted heartily instore with a Grazing Board, generously laden with artisan-cured meats, cheeses, breads, fresh pâtés, glace fruits, olives, pastes and condiments. But in such an idyllic location as Maleny, pamper yourself with a tailormade picnic box. The local farmers and producers are central to the Maleny Food Co story. Star specimens include Maple St Meats, Kokopod Chocolate and Maleny Dairies. www.malenyfoodco.com

Also on the dairy trail, the Cedar Street Cheeserie in Maleny is acclaimed for its outstanding fresh buffalo cheeses and butters made from jersey cream. All cheeses and butters are made by hand in small batches, by artisanal cheesemaker. East of Maleny, a stirring venture is QCamel, which as the name suggests, produces pasteurised and bottled camel milk. Many health buffs are gushing about the manifold benefits of camel milk, which is high in iron and low in lactose. QCamel is open for tours and tastings, including a camels and Canapes experience. What more could you ask for? and flora. The information centre sports a magnificent elevated viewing deck, offering a dreamy panoramic outlook across the eleven thrusting vertical rocky columns of the Glasshouse Mountains. These magnificent rocky outcrops, which are actually remnants of ancient volcanic activity, are the transcendent landmarks of the Sunshine Coast. The highest is Mount Beerwah at 556 metres above sea level, but the most identifiable is Mount Tibrogargan which from certain angles bears a resemblance to a face staring east towards the ocean.

Their bewitching shapes have a transfixing quality and steeped in sacred ancient history for the Jinibara people. They clearly captivated the imagination of one passing James Cook, who was struck by “the singular form of their elevation”, which he found reminiscent of the glassmaking kilns of his native

Yorkshire, and named them as such. For the Jinibara people, these craggy rocky peaks belong to a family of mountain spirits. To commune up-close with these wondrous formations, head down Steven Irwin Way and follow the signs to the Glasshouse Mountains National Park, where are variety of short walking trails amplify their strutting grandeur. 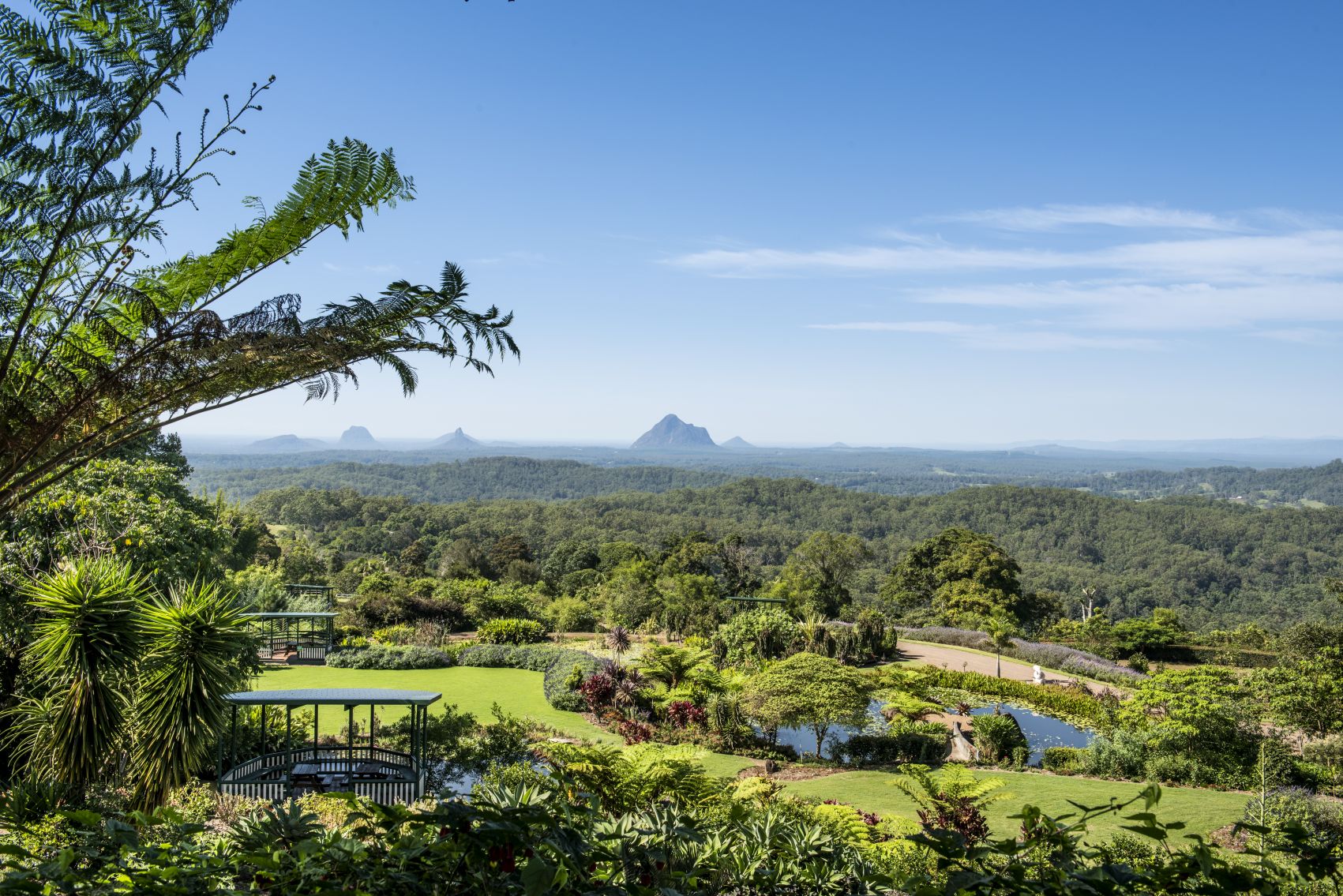 Another radiant encounter with nature is to tootle your way to Maleny Botanic Gardens and Bird World, one of Australia’s biggest private gardens. Arriving from South Africa in 2003, Frank Shipp had a dream of creating a botanical wonderland. After purchasing a Maleny cattle farm in 2005, he set about crafting 23 acres of challenging steep terrain on his undulating property, cultivating magnificent gardens interwoven with ponds, waterfalls and lakes, and a stirring aviary complex to house rescued birds. This botanical tour de force is like a green-fingered Disneyland, backdropped by the beguiling Glasshouse Mountains, and Frank’s labour of love is constantly expanding, after first opening ten years ago.

There’s an Oriental Garden, Rose Garden, Fairy Garden, a Rainforest Walk and a fascinating grotto of ancient basalt rocks that were thrust up at the same time as the Glasshouse Mountains were volcanically formed. Given the undulating terrain, you can hire a golf buggy to zip your way around all of the botanical delights, on perfectly formed pathways. But as much as the gardens are divine, it’s the feathered friends who really steal the show. Inspired by Durban’s Botanical Gardens, Frank set about integrating aviaries into his gardens, heightened by his abiding passion for birds and nature. There’s now four walk-through, free-flight aviaries to admire, abuzz with over 700 birds.

It’s the parrots that are the runaway favourites, many who were abandoned by previous owners for various reasons. You’ll encounter macaws, black cockatoos, Amazons, Green-cheeked conures and Alexandrines, landing on your head, arms and shoulders. And Frank was out in force welcoming guests on my recent visit. He’s as charismatic as his wondrous birds. His professional and insightful guides will soon allay any fears you may have about these big, brash and cheeky birds perching on you. It certainly takes the notion of an interactive tour to new heights and it’s utterly enthralling. Be sure to meet Coco, the Amazon Parrot, who sings opera and can belt out the first verse of “Old Macdonald had a Farm”, without dropping a note. Maleny Botanic Gardens is a do not miss. www.malenybotanicgardens.com.au 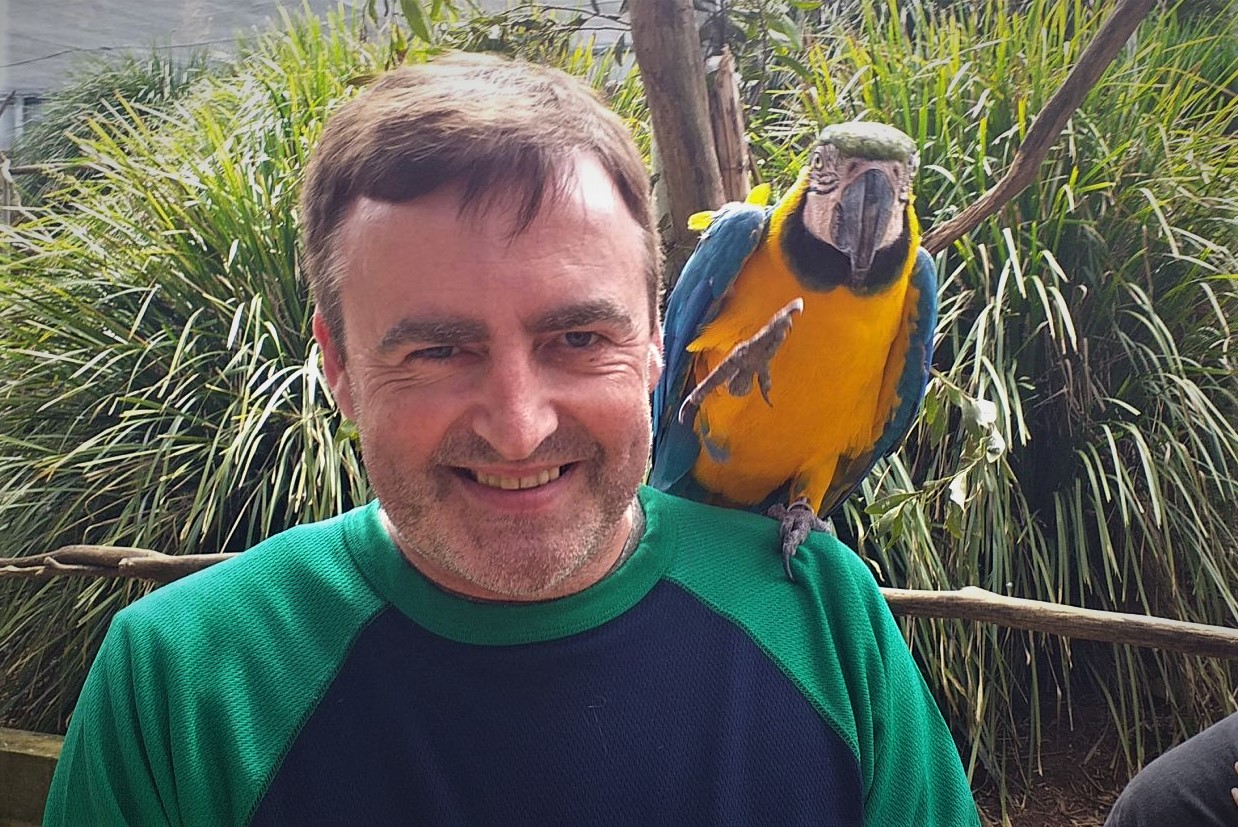 I flew to Queensland with the low-fares leader, Jetstar, who operate direct services from Auckland, Wellington, Christchurch and Queenstown. When you book on Jetstar.com, you're guaranteed the lowest fare. With their Price Beat Guarantee, if you find a better fare online, they’ll beat it by 10% - and that includes Jetstar flights you find on other websites. Conditions apply. Find out how it works.

With a superb year-round climate, escape to the Sunshine Coast to experience contemporary beach culture, lush and soothing rainforest encounters, charismatic Hinterland villages and unforgettable dining. Relax and recharge your senses in the Sunshine Coast. www.visitsunshinecoast.com