After savouring the unplugged splendour of Stewart Island and the wondrous trove of classic wheels in Invercargill, I pointed the car north for the one hour jaunt to Gore.  Egregiously under-rated as a destination charmer, Gore is your classic New Zealand town with a stout and golden-hearted community spirit, bustling town centre brimming with surprises and welcoming locals who are instinctively hospitable – no finishing school required. Gore embodies the heart and soul goodness of Southland, it’s country soul and gentle old-school manners. If you’re visiting in spring, the town’s showpiece rhododendrons will be in full-bloom.

An instantly embracing place where you are made to feel right at home, the moment you arrive. First up, I made my way to Hokonui Moonshine Museum which is the subject of an ambitious multi-million dollar upgrade, known as the Maruawai Project. Gore District Arts and Heritage curator, Jim Geddes, is a walking cultural powerhouse and shared with me the exciting plans to refresh the city’s cultural heart. Geddes was excited to offer people a more interactive experience with the expansion of the museum. The redeveloped museum and new distillery will offer a much more immersive and interactive encounter with Gore’s storied history with illicit grog. Illegal distillation in Southland began as far back at 1836, when Owen McShane made his “Chained Lightning’ for sealers and whalers, with the last prosecution in the late 1950s. 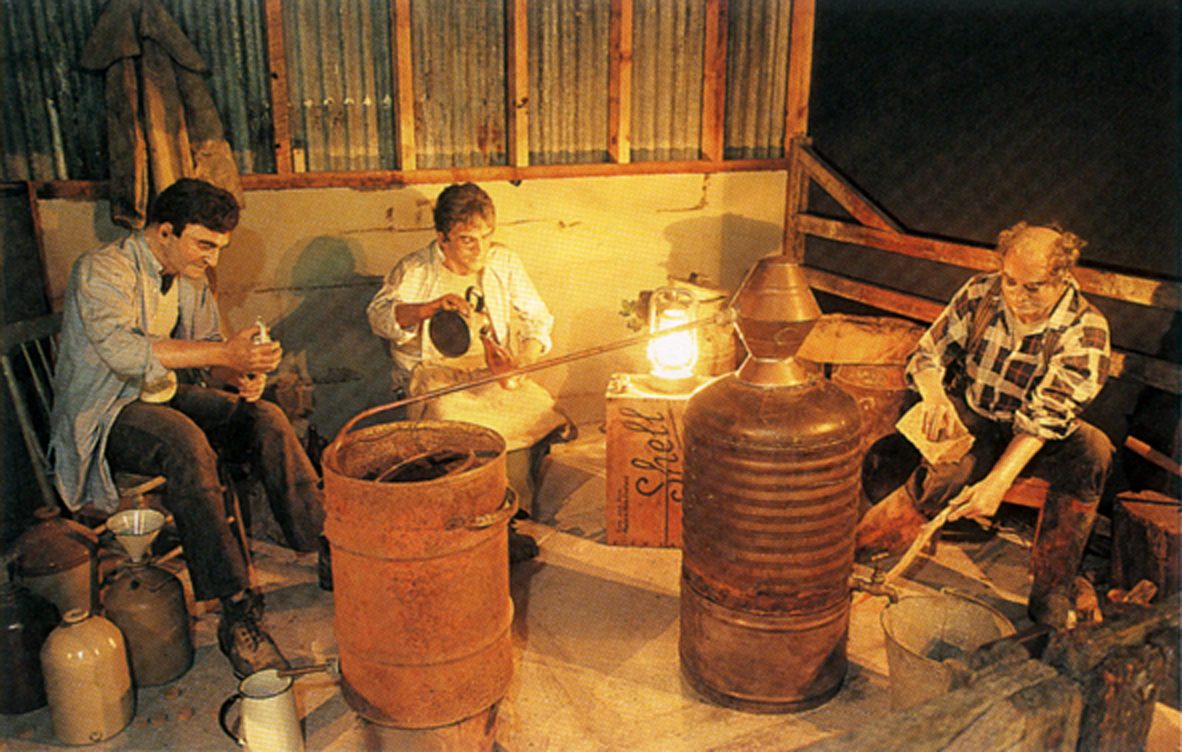 The town’s colourful legacy as a centre for illicit whisky distilling and bootlegging is absolutely enthralling, tracing the adventures of the Scottish settlers and their exploits in the Hokonui Hills to avoid run-ins with the constabulary. If you’ve seen the museum’s pre-existing dioramas, audio-visuals and artefacts, it’s about to be vividly enhanced. Be sure to savour a taste of Old Hokonui, made to the original recipe, as part of your visit – and definitely stock up on some bottles for enjoyment back home! Hokonui Honey Moonshine liqueur is divine, with manuka honey and a touch of mint.

The museum also does a sterling job in paying homage to  'The Story of Sgt Dan' which celebrates the contribution of oats, the Fleming family and their landmark Creamoata oats mill to the Gore story. The marketing finesse deployed to sell Fleming’s Creamoata gave rise to some daring advertising campaigns, including parachute drops over our towns of silver spoons to captivate children and the iconic character of Sgt Dan. Today, the towering building that produced the breakfast cereal is still churning out feed – for livestock, operated by Sergeant Dan Stockfoods.

Directly across the road from the museum is Gore’s astonishing tractor-beam for art-lovers, the Eastern Southland Gallery. Dubbed the “Goreggenheim”, this national ark of priceless art lures many an Aucklander to town, simply to visit this gallery. Why?  It houses the international art collection of Dr John Money who was Janet Frame's life-long friend and ally.  Based in Baltimore, he was a passionate New Zealand art collector, becoming a patron of Rita Angus and Theo Schoon, amongst others. Prior to his death, Money bequeathed his 300-strong collection of pieces to Gore and inspired by his benevolence, a variety of New Zealand artists, including Ralph Hotere, have given works.

This stirring gallery features 60 pieces by Hotere, hence why it’s cultivated such a red-hot reputation on the art map. Money had a tendency of not buying any further works off an artist once they had become successful. In Janet Frame’s autobiography, she writes about staying with him in his cluttered gallery-like home in a rough part of Baltimore, heaving with artworks. Jim Geddes, the gallery’s curator, can tell the most wondrous stories about recording and shipping the collection from Money’s home to Gore.  The Eastern Southland Gallery is a sigh-inducing communion with some supreme works of art. https://www.esgallery.co.nz/ 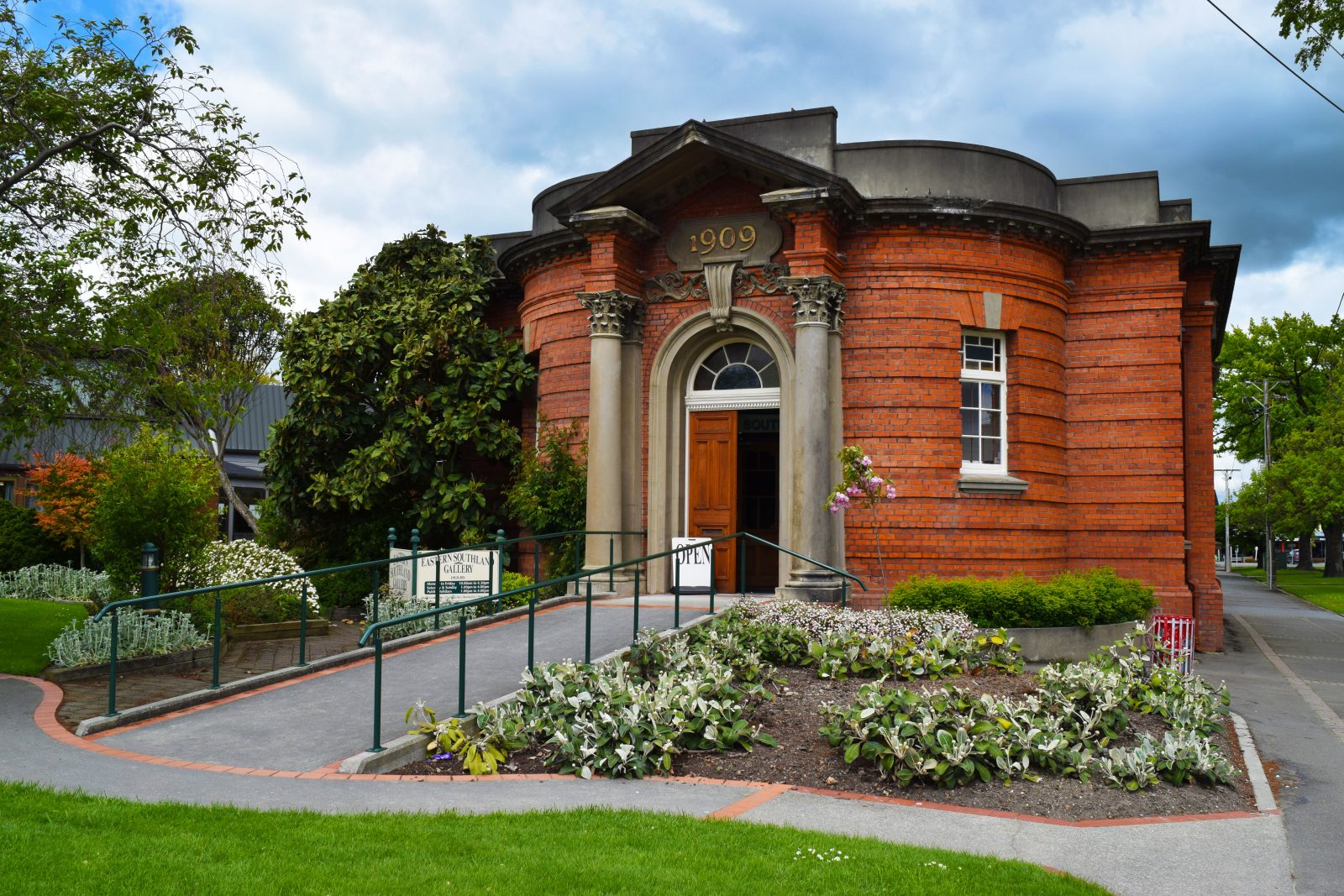 Catching up with a mate, Connor Kitto, Hokonui Radio’s breakfast host, we meet at the sublime main-street landmark, Thomas Green Public House and Dining Room. With a roaring fire, leather couches and lip-smacking pub fare, it’s destination dining. This glorious old pub was in danger of being bowled to make way for a cookie-cutter Speights Ale House, but the owners had the vision and grit to restore the grand old lady.

Ten minutes north of Gore, an absolute must is to stake out the evocative collection of classic aircraft at the Croydon Aviation Museum. Warmly greeted by the delightful Maeva Smith, this gem of a museum in bucolic Mandeville is eye-popping. Ever fancied taking a thrills and spills joyride in a Tiger Moth, complete with barrel rolls? Full of whisky and hearty Southern fare, I chickened out for fear I may have a mid-air chuck – but I was more than happy to spectate! The Smiths aviation restoration workshop and museum boasts a staggering assortment of vintage aircraft that are nearly all air-worthy. Keeping your feet on the ground, you can admire the bare wooden bones of planes being restored, perfectly laminated propellers, an airworthy replica of Bert Pither's 1910 homemade monoplane on its bicycle wheels, a Dragonfly, more Tiger Moths, and a Percival Proctor, as flown by Jean Batten.

The Smiths are dedicated to preserving and celebrating New Zealand’s civil aviation heritage. I loved gazing over the old Mount Cook Airlines scenic aircraft, venerable old workhorses from the NAC era and the rather startling sight of an Aermacchi Training Jet, which they snapped up when the air force decommissioned its strike capability. Gore is well armed! The restoration company was founded nearly 35 years ago by Colin and Maeva Smith, and is on the site of the old Croydon Hotel in Mandeville – famous for being the closest `wet' area for the town of Gore during the Southland drinking ban. Also on site, check out a railways veteran, the 140yr old Rogers K92 Steam Train, which still operates scenic trips. This train was a Kingston Flyer, tripping between Invercargill and KIngston to connect with the Earnslaw.  The train you see today was radiantly restored after being lifted out of the Oreti River in 1985!  www.croydonaviation.co.nz

For another indelible encounter with heart-warming Southland heritage, I headed just north of Gore to Mataura, synonymous with the mighty namesake river and the paper mill of yore. Housed in a gorgeously restored 1880s cottage, the Mataura Museum is a heart-stealer. A pint-sized shrine to the town’s highs and lows, meticulously presented with eye-catching displays and interactive touch screens which vividly showcases the town’s social and industrial backstory. This tireless community-led initiative has bestowed Mataura with a truly knock-out exemplar of how small towns can archive, preserve and curate their stories.

Where to stay? Just 3km from Main Street, The Reservation Gore is a superlative B & B, perched on the hillside, just west of central Gore. You’ll find yourself catching your breath at the angelic panorama across the town and rolling landscape.  Your delightful hosts are Jayne and Bruce Moffatt who are as heartland Gore as you get. Plus, you’ll probably meet 57 year old, Bart, a highly loquacious sulphur-crested cockatoo who sure knows how to command an audience! Accommodations are superlative, loaded with creature comforts and ample space. My executive studio included a private entry, patio and car parking at the door. Inside, it boasted a super king bed, separate lounge area with TV and DVD player, kitchenette, and en-suite bathroom with a luxury shower. It’s ideal for the corporate traveller or a romantic getaway.

Jayne cooked up me a hearty farmhouse-style breakfast after a heavenly’s night sleep in this cradle of relaxation. Take a wander around the gardens, meet the friendly farmy animals and drink in those magnificent views. They even have their limo to whisk you around, if you wish. Hospitality-plus. I felt so revived after a restful stay at The Reservation. Do not stay anywhere else! www.accommodationgore.nz

Home to the Gold Guitars, world-famous brown trout fishing and world-class art, plucky Gore absolutely punches above its weight. It’s an irresistible town that will reward you handsomely for making the effort to get down there, in the heart of Southland. www.southlandnz.com