Rising up from the heart of the North Island the volcanic plateau looms like a dome of adventure and discovery. Breezing up the island from Wellington, I soon arrived in the southern gateway to the Ruapehu region, Waiouru. How many times have you whizzed through this town, passing by the fortress-like façade of the National Army Museum, making a mental note to actually stop and check it out one day? I’ve been quite the recidivist. Breaking the habit of a lifetime, I finally did stop to pay the museum a visit and was handsomely rewarded. What a treasure-chest. I took a personally guided tour, with the most enthralling aficionado for military history, Daniel Tizzard. He was like a Harry Potter without the spectacles.

We started off at Roimata Pounmau (Tears on Greenstone), the soaring memorial wall which is the largest jade structure in the Southern Hemisphere. Commemorating all Kiwis lost in conflict, a veil of water descends down the greenstone face, as the names of the fallen are continuously read. It’s a stirring experience and very army recruit who graduates from training at Waiouru, swears their loyalty to the Queen, in front of this memorial. The exhibits, dioramas and sets, including iconic military vehicles, are spectacularly curated on this walk-through every theatre of conflict Kiwis have been engaged in, starting with the Boer War. That’s where you’ll find Gus the Horse who represents all eight thousand horses sent over to South Africa - and only one came back.

The personal exhibits are particularly poignant, like the uneaten box of chocolates Queen Victoria sent to every Kiwi soldier as a New Year’s Gift. From the Red Coats of the Imperial Forces to the Blue Berets of our Peacekeepers, the museum delivers a comprehensive exposition of our military story, which culminates in the glorious medal repository. The new children’s space is superb, primed with interactive features, if you’re travelling with kids. But what really gobsmacked me was Daniel’s matter-of-fact accounts that revolved around his numerous encounters with museum ghosts. You name it, it happens, particularly when they move exhibits – according to Daniel. Just ten minutes north of the museum, the Tangiwai Memorial stands guard over our worst railway disaster. Why is it that the scenes of such harrowing tragedy are so often situated in places of such overwhelming beauty? The memorial site is magnificent, lovingly maintained by various service groups in the area, and the short walk to the lookout over the Whangaehu River is chilling. You can see remains of the old Tangiwai rail bridge, that collapsed as a result of the lahar flow, right alongside its replacement. The sense of history here is raw. It’s the stories of battered teddy bears and Christmas presents that subsequently washed up from the river that really embodies the full wrench of human tragedy.

I do love stumbling upon unexpectedly good museums in small-town New Zealand and a knock-out specimen is the Dinosaur House in Raetihi. Housed in the century-old county council building on the main street, this labour of love is under the command of self-professed dinosaur obsessives, Ian and Sarah Moore.  Open barely a year, your jaw will drop at their trove of curated exhibits, including the suit Sam Neill wore in Jurassic Park, dinosaur skeletons and fossils, life-size reconstructions and tantalising animatronic models. T-Rex and the Spinosaurus are the stars of the show. It’s the country’s largest collection of dinosaur exhibits – guaranteed to enthral your inner-child. www.dinosaurhouse.co.nz

Just across the road, I popped into the delightful Raetihi Arts Trust Gallery, housed in the resplendently restored and award-winning former BNZ Building, which includes the bank manager’s elegant residential quarters. How indulgent! Acclaimed carver and print-maker, Michael Tuffery, is taking centre stage in the gallery over summer with a stunning installation and exhibition.

I spent a couple of leisurely nights, nestled at the foot of snow-clad Mt. Ruapehu, in the charismatic mountain town of Ohakune. The beloved Big Carrot landmark now has a supporting cast of vegetable friends scattered across the eye-catching Carrot Park and playground, ripe for adventure with an augmented reality game that will titillate your kids. Think Pokemon Go! (Download instructions are displayed in the park.)

The snow was glistening on Ruapehu’s slopes like freshly whipped cream as I made my way to my Ohakune roost, the Powderhorn Chateau. Turoa and Whakapapa are scheduled to stay open until mid-November, which is generally when the last chocolate eclairs are available for sale from the famed Chocolate Éclair Shop on Ohakune’s main street. Sink your teeth into one of these celebrated treats before it’s too late! The Powderhorn Chateau is not just a sublime European alpine lodge, offering a spoil of top-end comforts, but it’s a cherished social nexus in Ohakune. The Powderkeg Bar & Restaurant is feted for its sparkling service, warm and convivial atmosphere, and roaring fire in the cooler months.

Open from early morning to late evening, I feasted on delicious dishes, around the clock, from the fabulous Egg in a Hole Bagels for breakfast to their gourmet pizzas and pork ribs for dinner. For over thirty years, it’s commitment to great service and splendid quality free range food has cemented its stature as a perennial favourite. The indoor hot pool with bar service on-demand, is my kind of indulgence. My suite was a homely cocoon of warm-timbered comfort, with high-end linens and fabrics, expansive bathroom and work desk. Perfectly poised at the start/finish line of the Ohakune Old Coach Road ride, and the closest accommodation to Turoa, Powderhorn Chateau is the wow-factor place to stay. www.powderhorn.co.nz

In the heart of town, another inspired dining option is Industry Bar & Grill. Their calling-card is the $20 mains, including Industry Noodles, consisting of shiitake mushroom dumplings, udon noodles in a rich thickened broth, topped with spring onion, bok choy & shallots. Magnificent. Be sure to order up some Garlic Fry Bread, a wonderful twist on New Zealand’s traditional fry bread but made to the recipe handed down by Dane the owner’s great grandmother. It’s seriously moreish.

But despite the myriad temptations to please the belly, Ohakune is all about adventure and my signature assignment was to strike out on the Ohakune Old Coach Road. First up, I hooked up with TCB, Ohakune’s leading ski, bike and board retail, rental and repair specialists. James from TCB kitted me out with a top-of-the-line E-Bike and joined me on the 15km thrill ride connecting Horopito to Ohakune. Cycle buffs will know it as the second leg of the wider Mountains to Sea Cycle trail, but this ride is pitch-perfect for newbies to mountain biking. It’s a grade two trail so it’s not too taxing, but I highly recommend starting from the Horopito end for a more downhill ride. (TCB will happily organise the quick transfer.)

Adjacent to the trail is the traffic-stopping sight of ‘Smash Palace’ car-wreckers, which also featured in Goodbye Pork Pie. Horopito Motor Wreckers is the largest vintage car dismantlers in Australasia, and the spectacle is captivating for its rustic beauty. This cycle trail deserves its reputation as one of New Zealand's best day rides, an evocative old pack-track and restored cobblestone road around the foothills of Mt Ruapehu, traversing Tongariro National Park forest and farmland, with sweeping lookouts over the volcanic plateau. But it’s the Victorian engineering, spooky tunnels and two herculean railway viaducts that are the runaway highlight. The fatally-rusted Taonui viaduct makes for a striking backdrop but the old Hapuwhenua Viaduct is good to go. 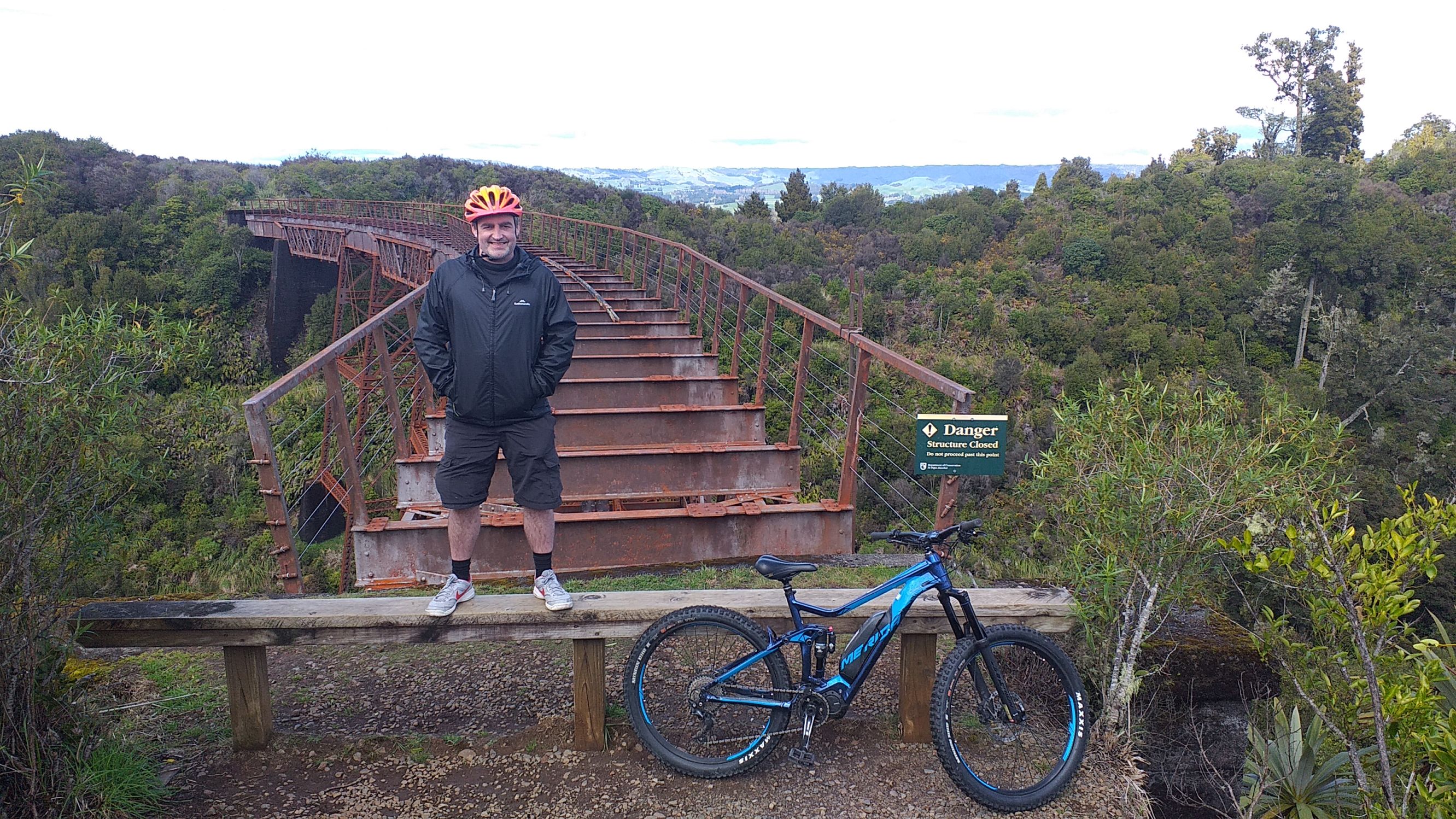 You can cycle or walk across this colossal and curved structure, the longest viaduct in the Southern Hemisphere at 284 metres long, and 45 metres above the river. I dare you to look down between the sleepers! It was restored as part of the Cycle Trail development, while the newer Hapuwhenua Viaduct does a brisk trade for KiwiRail. There’s a bucketload of history to lap up, imparted by the information panels, sprinkled along the route. The old cobblestone road was originally built for horse drawn coaches in the early 1900s to transport passengers between the two rail heads of the unfinished North Island trunk line. Shortly after completion, it fast became obsolete and was consumed by the forest, when the railway line was linked up. It’s a riveting ride of movie-set good looks, spectacularly scenic and richly drenched in pioneering history. www.tcb.nz

The drama and grandeur of the Ruapehu District has undeniably evolved into a year-round wonderland for outdoorsy adventure, with experiences that cater for all age ranges and abilities. Make your first stop the region’s official website. www.visitruapehu.com

I picked up my Avis rental car from Wellington Airport to free-roam the central North Island. The Avis Safety Pledge allows customers to pick up and drop off vehicles with minimal contact. This has been complemented with the recent launch of the Digital Check In option, dramatically speeding-up time at the counter. You can also plan ahead with risk-free bookings by selecting the Pay at Counter option. You can change or cancel, without fees, any reservations in New Zealand for rentals due to start before 1 March 2021. Plus, get up to 10% off your rental for all prepay bookings made before 20 December. Sign up to the Avis newsletter to score a free upgrade. www.avis.co.nz