Venturing to New Zealand’s last frontier of Stewart Island (Rakiura) feels like you’re stepping into a secret garden. A wondrous sanctuary, an island Eden, lassoed by the power and bounty of the Southern Ocean. Stewart Island had long been on my Kiwi bucket-list, but the Covid age has certainly provided the dream opportunity to walk the talk on our “I must do that one day” wish-listing. Rakiura will not disappoint, it’s a revelation. This national treasure will fast puff you up in patriotic pride. After a silky smooth 20 minute morning ride across Foveaux Strait from Invercargill, with Stewart Island Flights, the shuttle van sidled up to our pint-sized plane on the island’s elevated airstrip, before whisking us to Oban on the quick 5 minute transfer. It’s an inimitable way to arrive. www.stewartislandflights.co.nz

My 24 hour foray to the island meant there was no time to waste, so from Oban I hit the ground running heading off to Ulva Island. Warmly greeted by my distinguished guide, Matt Jones is Chair of the Ulva Island Trust and my host extraordinaire treated me royally. After all, he led Prince Harry around the island on his famous visit five years ago. We took a short taxi ferry across to Paterson Inlet from Golden Bay to this pristine jewel of primeval beauty. It’s the stillness, the rarefied silence that first casts you under its spell, on arrival. As one of New Zealand’s few open island sanctuaries, the majority of the island is under national park protection, while the area of land around Post Office Bay is privately owned by the Hunter family. (If they ever want to sell, DOC is the only legal buyer.)

The Post Office is still there, built by Charles Traill in 1872, the same man who had the courageous foresight to protect Ulva Island as a bird sanctuary. He was a respected naturalist and botanist, although the exotics he planted on the island was a misguided endeavour in diversity. Matt pointed out to me his monkey puzzle tree which looks incongruously out of place, today. Declared a protected reserve in 1899, after decades of whaling, sealing and forestry, the history of New Zealand’s first declared nature island as an eco-tourism pioneer runs deep. I was enthralled by Matt’s insights about Muttonbird Scrub, a thick papery leaf and close cousin of Rangiora, better known as Bushman’s Friend. Muttonbird Scrub, that grows prolifically in these parts, rose to global prominence as a ready-made postcard, a craze which gripped Victorian society over a century ago.

The leathery leaves didn’t curl up, become brittle or rot, so it became an inter-generational pastime to mail this unique Stewart Island postcard, the world over. With stamps affixed, tourists would dispatch them from the Paterson Inlet Post Office until they were no longer accepted as legal post in 1973. But it’s the forest finery that I kept swooning over, as Matt led me through the well-maintained gravel trails. I gazed in awe of ancient rimu which you can see at all stages of growth: seedlings, saplings, young juveniles and grand old specimens. Matt enlightened me that if you can hug the girth of a rimu trunk, it’s likely to be 200 years old. Crowning the canopy of this Gondwana forest are more majestic podocarp giants; mighty totara, kamahi, miro and southern rata rising like skyscrapers above the uncurling fern fronds that carpet the forest floor. 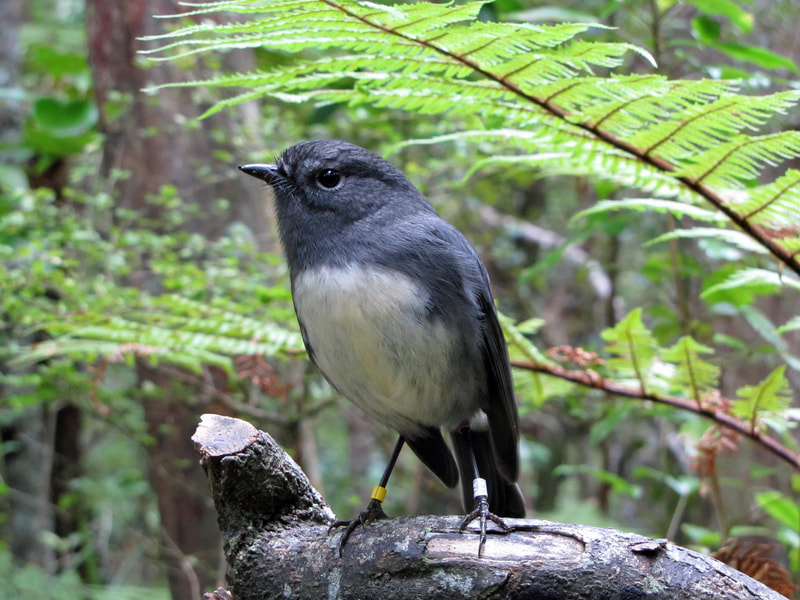 I was fascinated by the miniature forest of umbrella moss slathering the ground. It’s a sign of pristine air quality. Equally bewitching are the orchids that garnish proceedings. The birdlife was operatic, from chattering kakariki and the cheeky and chatty kaka, who shred the bark off totara with ease, to the melodic and mimicking calls of the bellbird and tui. I spied saddleback, kereru, a morepork, fantails, yellowheads and weka which are actually rarer in Stewart Island than kiwi. It was actually a flock of startled yellowheads, signalling the alarm about a dozing morepork, that led us to admire both species. The beautifully mottle-coated morepork is a predator. Another highlight were our encounters with the delightfully fearless, inquisitive and sociable South Island Robin.

These guys will hop right up to you, hoping you’ll scuff the ground to provide ready access to the grubs. Then there’s the shining success of saddleback, that have been extinct on the South Island for a century. 30 were brought to Ulva Island in 2000. Today, there’s hundreds of them. A major DOC badge of honour. Another ground-breaking achievement was notched up in 1997 with the eradication of rats from this glorious fenceless zoo. Matt remarked that on average one rat a year is still detected hitching a ride to Ulva, due to their accomplished aquatic skills. They’re able to swim for 700 metres across the inlet and even the cleanest boats moored offshore can harbour rats. By choosing Ulva's Guided Walks, a portion of the proceeds supports Gadget, the only rodent detector dog in the south of New Zealand, helping to keep Ulva Island predator-free. 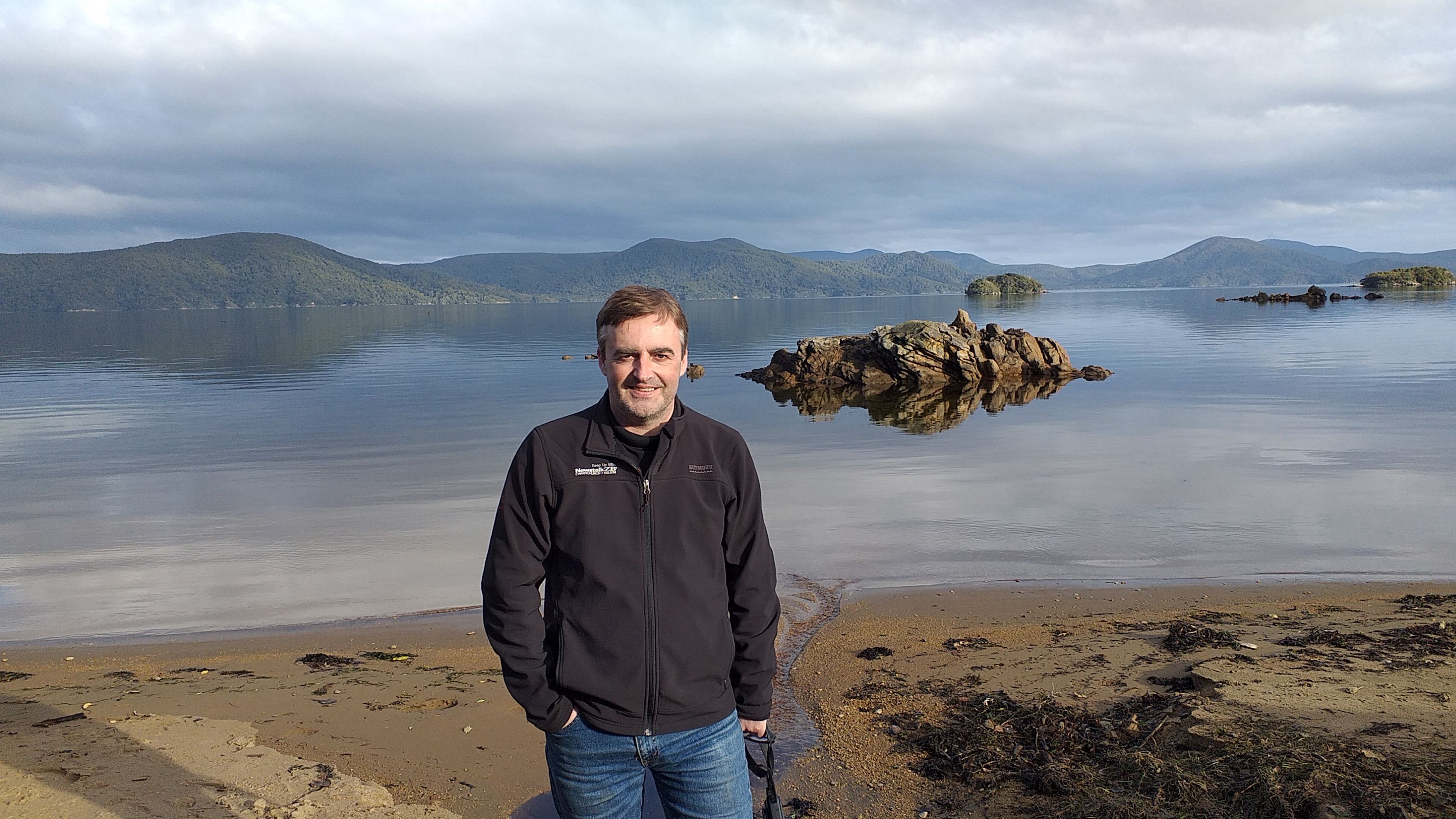 The scourge of many a native bird egg and chick, the humble stoat, has never managed to make its way across the Foveaux Strait. The golden beaches edging the island are a vision of elemental serenity. As I gazed in awe at the gin-clear waters at Boulder Beach and Sydney Cove, edged in podocarp forest, you can’t help but feel immensely privileged to savour such a pristine pocket of unpeopled beauty. It’s a mesmerising place, a cure-all realm for jaded city souls. My half-day tour with Matt has whetted my appetite to return to Stewart island for more immersive encounters with nature’s feathered treasures and the lush rainforest. www.ulva.co.nz

Home to 20,000 Kiwi, Stewart Island boasts a third of our national bird’s entire population. There’s actually 50 Stewart Island Kiwi (Tokoeka), a sub-species of the Southern Brown Kiwi for every permanent resident and many locals were eager to tell me where I was most likely to see them pottering about in daylight hours. Yes, the kiwi here are diurnal, such is the lack of predatory risk. I saw one fat kiwi scamper into the bush as I headed up to the dreamy lookout haunt of Observation Rock. The reaching views are screensaver-perfect. There are breathtaking walking trails all over the island, to suit all ages and endurance levels, flowing like ribbons through the verdant bush. Hiking heaven! Later in the evening, I met up with Graham from Ulva’s Guided Walks who whisked me over to Mamaku Point Conservation Reserve to ogle the largest of New Zealand's kiwi species, in its natural habitat.

The distinctive calls of the male and female birds rung out across the reserve, helping is to close in on where they were feeding. Equipped with a trusty red filter torch, it was astounding how many kiwis we saw in the space of a couple of hours. The size of these birds is what astounded me, much bigger than their northern brothers and sisters, with equally impressive beaks. They were pre-occupied chowing down on earthworms, one of them obliviously wandered right across my shoes. Priceless. I was equally star-struck by the night sky. The glittering chandelier of constellations was beyond belief, as if it had been touched up by Disney’s Tinkerbell. Mysterious and magnified in the pure clear air. No wonder Stewart Island is an accredited International Dark Sky Sanctuary. Rakiura translates in Maori as the land of glowing skies. Bingo. Despite the island receiving rain 200 days a year, the weather gods through all four seasons at me over the course of 24 hours, from warm bright sunshine to a torrential storm. I awoke to the most spell-binding sunrise, casting the skies above Halfmoon Bay in streams of candy-floss pink. No matter the weather, the beating heart of Stewart Island’s tight-knit community is the charismatic South Sea Hotel, as Stewart Island as it comes. You’ll likely rub shoulders with oyster farmers, wave-lashed fisherman and hardy trekkers. Muddy gumboots galore mingle outside the front door. Everyone’s welcome, there’s always a tale to be told, the beer is ice-cold and loitering kaka hang about in the hope of pinching a chip. Initially built as a boarding house for forestry workers, it’s been a hospitality beacon since the 1960s, open for breakfast, lunch and dinner, with an all-day café and convivial bar.

You must order up the battered blue cod, fresh out of the ocean and the tastiest I’ve ever devoured. The biggest seller is in fact the Seafood Chowder, a sublime blend of mussels, shrimps and blue cod in a creamy base served with ciabatta. The hotel walls are richly lined with a gallery of evocative photos that dive deep into the island’s back-story. This Kiwi classic enjoys a dress-circle perch in Oban, overlooking the seductive curve of Halfmoon Bay. My accommodation in the modern studio units was super toasty, with comfortable bedding, complimentary tea and coffee, wifi and TV. If you happen to be in town on a Sunday night, don’t miss pub-quiz night - South Sea Hotel signature. Even Prince Harry made sure he didn’t miss it. www.southseahotel.co.nz

At the nearby Four Square, birthdays are cheerfully announced on a chalkboard outside the store, underscoring the heart and soul of this hardy community. Some families are fifth and sixth- generation islanders, exemplifying the abiding affection for this blindingly green far-flung haven. What was my biggest takeaway from my first foray to our nation’s third island? It only takes one visit to fall head over heels for this faraway corner of New Zealand. It’s as dreamy as reality gets. www.stewartisland.co.nz