The immensity and density of Lake Te Anau, guarded by impregnable mountains, set the stage for great adventures, on my latest fling with Fiordland. New Zealand’s second largest lake holds so many secrets and hidden gems, which are graphically laid bare to those who head off the beaten track. A star specimen is the Hidden Hankinson experience, a full-day boutique adventure with Fiordland Outdoors Company, Mark and Christine Wallace’s home-grown enterprise that celebrates authentic Fiordland. A fresh skiff of overnight snow had capped the peaks of the legendary Murchison Mountains, as I boarded Mark’s boat at Te Anau Downs, for our 40 minute jaunt across the lake into Middle Fiord, one of three large fiords forming arms on the lake’s western flank. A stiff southerly created plenty of chop and a hefty swell.

Oozing with insider knowledge, authority and rich anecdotes, Mark remarked that over 4000 stoat traps have now been laid across the “Murchies” formidably steep terrain, as part of the colossal pest eradication programme. Home to the Takahē Recovery Programme, it was in these mountains that the takahe, that had been deemed to be extinct, was triumphantly rediscovered in 1948. Mark tells me the current population now stands at 445, of which 200 reside in the Murchies. What a comeback! You can visit the Murchies with a permit from DOC. We also passed by Centre Island, which is a creche island for the Haast kiwi. Entering Middle Arm, the of back-of-beyond remoteness swept me up, as the hands of my body clock slowed right down. 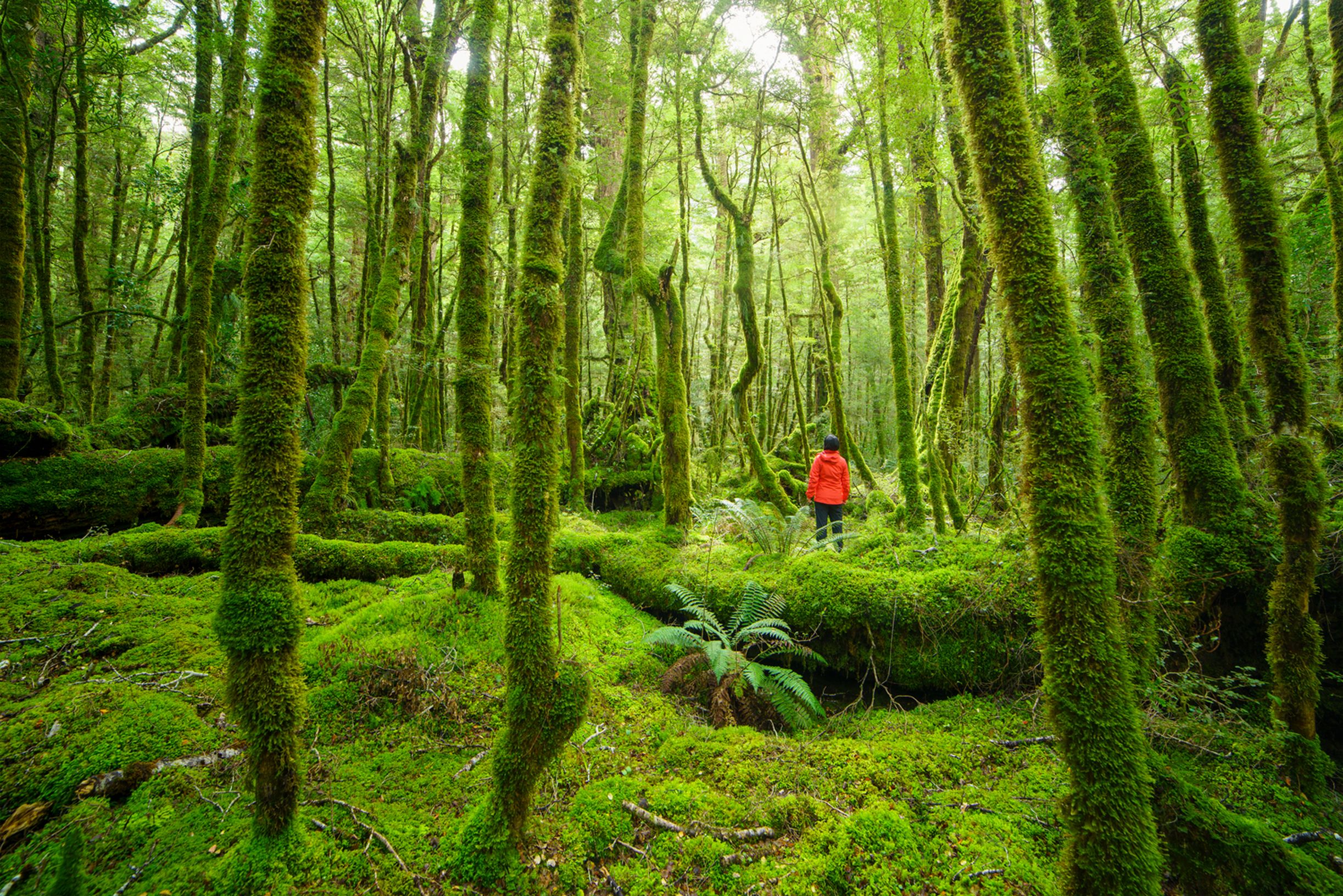 Gazing up at the cranking waterfalls and the deep quartz veins running through the granite, the supreme sense of separation from the daily bustle of modern life took hold. At the top of the arm, we beached our boat at the start of the George Sound Track, an extremely challenging tramping route that traverses exceptionally mountainous country, before reaching George Sound and the Tasman Sea. Thankfully, that wasn’t on the agenda, rather a short stroll through gloriously ancient beech forest to reach the Lake Hankinson, while grazing on baby fern fonds, flanking the free-form path. Boarding our second boat, we shot across this trout-filled glacial lake as the rugged grandeur of the Stuart Mountains serrated the sky. As a seasoned pro, Mark will get you sorted with a fishing line.

Alighting from the boat, the wrapround beauty was next-level, as we strolled around the thickly forested terraced banks, above the gin-clear tannin-stained magnificence of the Wapiti River. It’s untamed wilderness at its most exalted. Largely trafficked by game hunters, this is indeed wapiti country. The largest of deer species, ten of them were gifted to New Zealand by President Teddy Roosevelt in 1905, released in George Sound – and the rest is history. I half expected a moose to mooch into view – the last reported sighting was in Dusky Sound at the start of the year. But the cherry on top was to enjoy our picnic lunch in Fiordland National Park’s oldest operating hut, Hankinson Hut, which has stood the test of time since being constructed in 1923.

Restored in 2019 to deal to the rotten floor, piles and sub-frame, it’s a treasure to encounter, an enduring totem to the unrivalled sense of true wilderness that Fiordland excels in delivering. (This time-honoured rustic beauty is equipped with heating, mattresses and bunk beds, toilets and a wood stove. The gnarly old wooden table is etched with carvings from numerous angles, hunters and escapists.) Mark’s family call Lake Hankinson “the Sanctuary,” it’s their favourite go-to escape in Fiordland. For a wondrous encounter off the well-worn trail, the Hidden Hankinson experience ticks all the boxes. Immerse yourself in Fiordland’s full wonder. This small-group experience is capped at 6 people per trip. As an optional upgrade, you can return to Te Anau by chopper, for a scenic flight via the Murchison Mountains. www.fiordlandoutdoors.co.nz

Another great frolic is to join Fiordland Jet on their Pure Wilderness Tour, a 2 hour romp on the water and in the bush, which begins from Lake Te Anau on an exhilarating ride, soaking up the splendour of the Waiau River. Connecting Lake Te Anau with Lake Manapouri, the Waiau River is a majestic trout-filled river, thickly robed by ancient beech forest and crossed by swingbridges. Our jetboat driver, Lex, enchanted us with a cracking commentary, packed with insider stories and commanding knowledge. Remember the great Anduin River of Middle Earth? It featured in The Lord of the Rings opening scenes and you’ll see a multitude of filming locations on the Waiau. 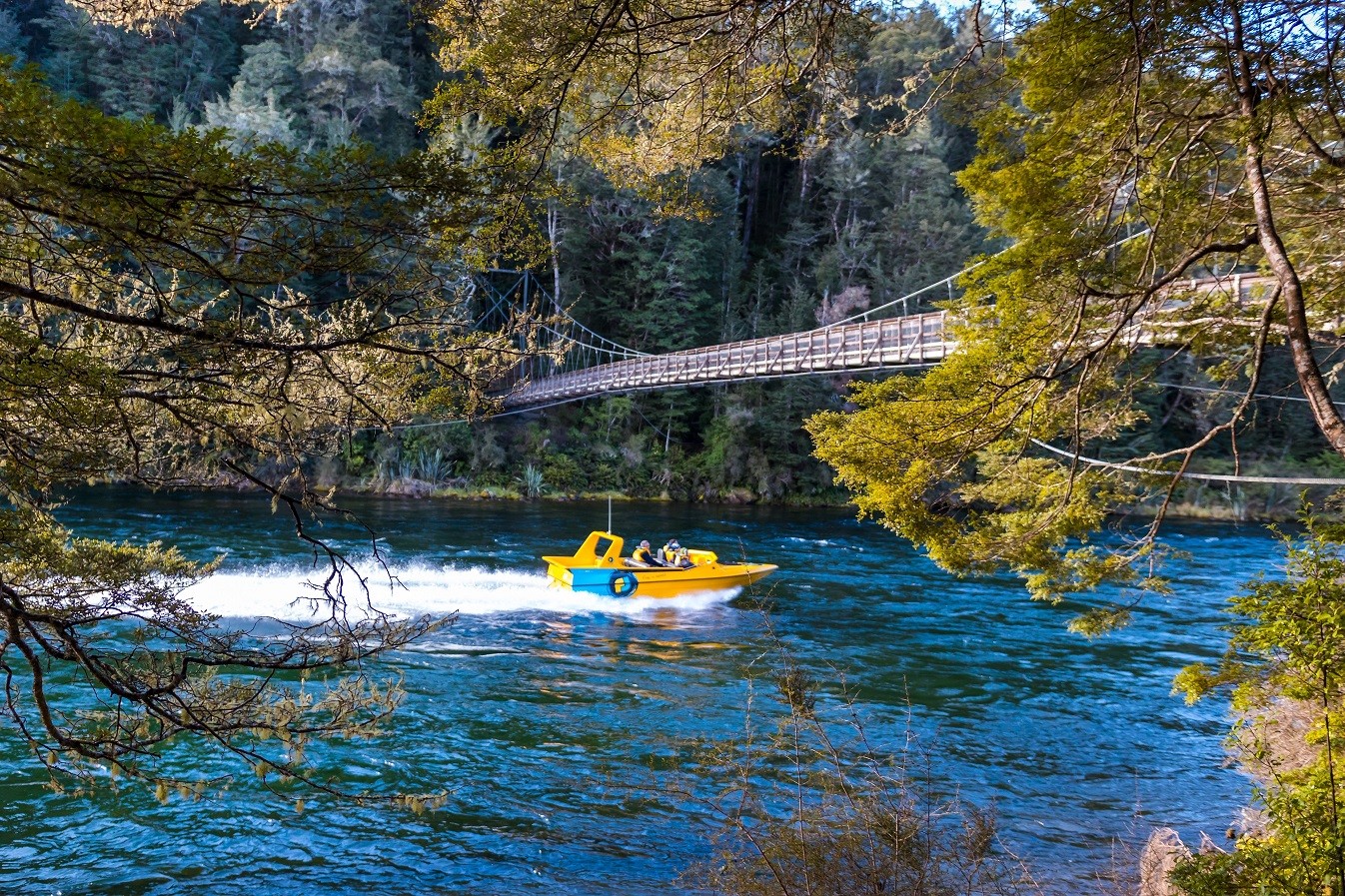 Casting our eye over an area of manuka shrubland, Lex pointed out that this was the home of a pioneering run holder, Jack Beer, who drove his sheep onto Mt Luxmore’s grassy slopes for summer grazing. This larger-than-life local legend who farmed until he died in 1930, supposedly pushed a pig in a wheelbarrow 13 miles to the farm of Burton Murrell at Manapouri, who couldn’t buy it, and then on to Te Anau. He once picked up a sack of flour from the Te Anau hotel and carried it home, where he found it wasn’t addressed to him. He promptly carried it all the way back again.

We dabbled in the serene, placid waters of Lake Manapouri, while also enjoying a taster of the Kepler Track, with a short constitutional through the forest finery. After some decent rainfall, the thick carpets of moss and lichens clambering up the trunks and tall limbs of the forest giants positively glowed in vivid green hues, adding to the beech forest’s fairy-tale atmospherics. www.fiordlandjet.co.nz

At the conclusion of the jet boat tour, you can opt to ride back to Te Anau by mountain bike, on the newly formed Lake2Lake Cycle Trail. There’s a couple of hills to mount, (book a hardtail ebike), before the trail snakes along the river’s edge for a close-up perspective on the Lake Te Anau Control Gates, before edging the lakefront all the way back to town. Whether you’re on bike or by foot, do not miss the lakefront Te Anau Bird Sanctuary. Open from dawn until dusk with entry by recommended gold coin donation, the aviaries and pens house so many native birds, headlined by the show-stopping takahē enclosure.

The sheer size of Fiordland National Park is gob-smacking, larger than Yosemite and Yellowstone National Parks combined.  A great way to get a feel for its unbridled immensity is to head to Fiordland Cinema for a screening of the acclaimed film, Atawhenua- Shadowland. Ata Whenua, showcasing Fiordland’s World Heritage-listed wilderness. Mysterious, evocative and gob-stopping, the 32 minute film was shot mostly from a helicopter across extremes of season, climate and terrain, by the cinema owner, Kim Hollows of Fiordland Helicopters.  It is cinematic majesty at its best, coupled with a soulful narration by Sir Tipene O’Regan. It screens multiple times each day, plus the adjoining Black Dog Bar is the perfect nook for a celebratory drink, in the heart of Te Anau.

If you fancy a sampling a flavour of Fiordland’s Great Walks without slugging it hard for days on end, or if you are time-poor, Te Anau-based Tramps and Trips offers a delightful range of taster experiences. One option is to soak up a day walk with Fiordland’s 3 Great Walks in three days. (Kepler, Milford and Routeburn.) You can expect small group numbers, an experienced nature guide and an indelible sample of Fiordland’s wonderland.  https://tripsandtramps.com/