Palliser Bay’s wind-ruffled theatre of natural splendour sets the stage for A knock-out spring roadie. There is a savage, raw-edged beauty to the Southern Wairarapa coastline, a place exposed to the wilds of the Southern Ocean and operatic weather. When the wind whips up from Antarctica, driving swells northwards, the land and sea comes to serious blows at Cape Palliser, the southernmost tip of the North Island. I have experienced her many moods, including braving the cape during the August polar blast. The monstrous waves, brooding clouds, muted colours and misty foam-flecking spray conspired to produce an ends-of-the-earth spectacle of high drama. Whether it’s under storm clouds or a big blue dome, Palliser Bay is an all-weather entertainer, guaranteed to deliver a ripper jaunt.

Heading out from Martinborough’s mannered streets of tidy houses, clipped lawns and white picket fences, the bucolic drive to the coast shuffles from pastoral plains to undulating countryside. I soon realised why the car rally crowd and two-wheeling weekend warriors swoon over these country roads, interspersed with photogenic little villages, like Pirinoa. Coffee break? The Land Girl is a fabulous modern country café, housed in a repurposed roadside woolshed, under the helm of Andrea Didsbury. Just out of Pirinoa, there’s a sigh-inducing little church, Burnside Church, that seems to have shuffled straight out of a Christmas card photo-shoot. 20 minutes later, I parked up at the entrance to the Putangirua Pinnacles Scenic Reserve, in Aorangi Forest Park. It’s a 90 minute return walk to this bewitching rock formation, which is enjoying magnetic appeal courtesy of its starring appearance in Lord of the Rings. Steadily climbing through the steeply beech-forested flanks of the hillside, just as the track threatened to turn my legs to jelly, the path settled into a manageable incline. The endurance test was made all the more cathartic by the elevated perspective across Palliser Bay, soundtracked by the flitter and twitter of our feathery friends.

But the viewing platform of the Pinnacles is the prize draw, offering up a cinematic panorama of these geological “badlands.’ Largely composed of greywacke gravels exposed by rain and floodwaters, harder layers of rock cap these fluted stone pillars, or hoodoos, which protects the underlying soil from the rain and prevents the soft gravels from eroding. They are New Zealand’s most extensive example of hoodoo erosion formations. They are as wondrous as anything I have seen in Utah’s famed and fluted national parks.

Despite being battered by some of the fiercest weather in the nation, the gritty little fishing village of Ngawi is not deterred from launching their boats into the wild sea in search of a catch of crayfish. Conspicuously lacking a sheltered harbour, fishing boats are hauled in and out of the sea by an astonishing battalion of bulldozers and tractors, which are as widely varied as the boats they pull. This rugged retreat for local holidaymakers boasts more tractors per head of population than anywhere else in the world. From the stony shoreline, I marvelled at this rustic eye-ball feast of workhorses, standing at attention like dutiful ocean sentinels. It would have to rate as one of the most novel coastal curiosities to grace our shores.

It’s like a rendering of industrial-chic shoreline art. You may well have seen Ngawi on the TV in recent years, without even realising. That Lotto ad featuring the father on a fishing boat and his son on a pirate ship, was shot here. The drive along this magnificent coastal stretch from Ngawi to Cape Palliser is wedged between the shoreline and the steep dry hills of the Haurangi Range, which swoop down to the sea. Perched on a rocky bluff lording over the cape and smartly painted in candy-stripes, the Cape Palliser Lighthouse is a riveting landmark, beckoning you upwards, via the formidable flight of 253 steps straight up the wooden staircase. I actually found this to be a more excruciating work-out than the walk to the Pinnacles! 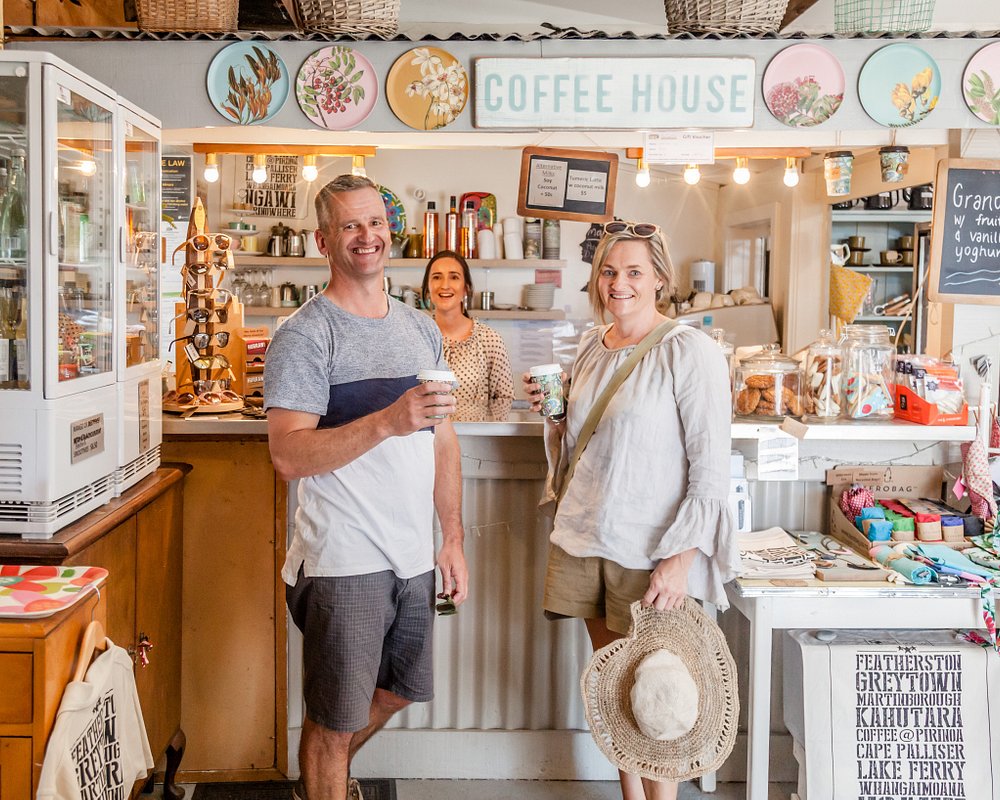 The lung-busting ascent felt like hell, but trust me, it’s the stairway to heaven, because the trippy coastal panorama to reward you at the top is utterly rhapsodic. After you’ve managed to catch your breath, Instagram your heart out with the hero shots on offer from this loftiest of perches. Alongside devouring the gleaming coastal sprawl of Palliser Bay, the enormous sky, wide horizon and ocean blue was serrated by the snow-capped majesty of the inland Kaikoura Ranges, looming large across Cook Strait. (Tapuae-o-Uenuku, which in Maori translates as "Footprint of the Rainbow”, is the highest peak of the Kaikouras’, at 2885 metres.)

As the wind and sea mingled in a symphony of sound, I was struck by the mishmash of subtly shifting azure, cobalt and indigo blue hues you can discern offshore, signalling the collision of Cook Strait currents with the rolling depths of the Pacific Ocean. Built in 1897, the lighthouse continues to help guide navigation around the perilous cape and rocky headlands. Prior to the staircase being constructed, the lighthouse keeper had to winch his way up the slippery rocky slope, before it was automated from Wellington. What a commute! The keeper’s cottage still sits at the base of the stairway. Another focal point of intrigue are the whimsical shapes of the rocky outcrops that stretch out into the bay at Cape Palliser. Many of these rock stacks are actually lava flows, pushed up and on to the shoreline from the network of underground volcanos lurking under the ocean. Their intense black colouring provides a striking contrast with the vivid ocean blues. These rocks are also home to the North Island’s largest fur seal breeding colony, who contentedly spread themselves across the Cape Palliser’s nooks and crannies. It’s the bull seals who call the shots, organising the territorial spacing in late spring. Time your visit pre-Christmas and our blubbery friends will be out in force, with mothers teaching their pups acrobatic lessons in the lava rock pool. The pups exude a frisky, care-free playfulness while the bull seals loll about on the rocks, snorting and hollering like pickled members of an old boys’ club after a few too many brandies. Just don’t get too close to them!

History lessons lurk around every corner. James Cook named Cape Palliser in honour of one of his naval mates and the name extends across the sweeping bay to Turakirae Head. Early European sheep farmers drove their flocks around the coast from the Wainuiomata Valley, with the bay serving as their gateway to the sprawling pastoral quilt of the Wairarapa Plains. The windswept beach was the staging post for their produce, whereby the likes of wool bales were hauled out to waiting ships by hardy oarsmen on surfboats. 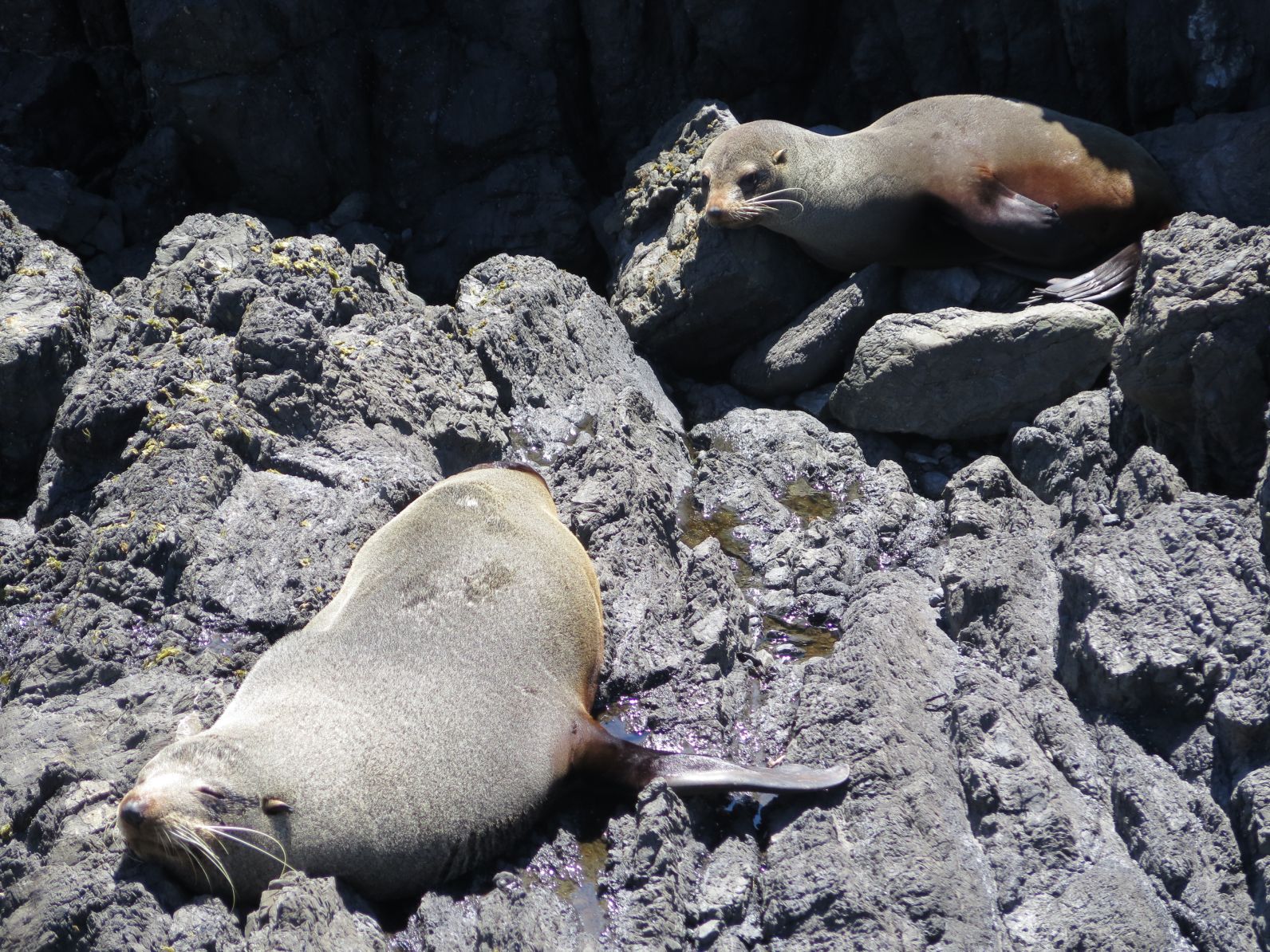 Well-endowed with kai moana, the Wairarapa coast it is one of the oldest inhabited regions for Māori, with archaeological sites indicating iwi settled around Palliser Bay in the 14th century. Close to Ngawi, you can see ancient stone walls that early Māori built in the ridge lines to protect their kumara gardens. I also marvelled at the gigantic triangular slab of tilting sandstone rock thrust up by an earthquake that iwi call “Kupe’s Sail.” The great explorer apparently rested here and the story goes that that Kupe challenged his companion, Ngake, to see who could complete a canoe sail first. Kupe won, with both sails hung up against the cliffs.

Hunger levels rising? Salute your explorations with a lip-smacking lunch of the freshest fish and chips at the historic Lake Ferry Hotel, one of the nation’s oldest licensed hotels, at the confluence of Lake Onoke and Cook Strait. Immerse yourself in the rich heritage and cultural drama of the Wairarapa Coast. With five characterful small towns, Wairarapa offers a thriving café & restaurant scene, art and culture, incredible wines, a dramatic coastline and sublime nature walks. Make your first port of call the region’s official website. www.wairarapanz.com