Sun-drenched Blenheim might well be brilliant every day. Bluebird skies and gentle sunshine faithfully bathed my late winter fling with the city, as the first hint of spring started to bud in languid, leafy Seymour Square. As New Zealand’s largest winegrowing region, revered for its globally-acclaimed Sauvignon Blanc, this wonderland of vines and wine groans with temptations. Marlborough produces 75% of New Zealand’s wine with 85% of that being Sauvignon Blanc. My first stop in was in the bucolic embrace of the Awatere Valley, home to Yealands Estate, nestled on the Seaview Peninsula.

The roof of the winery houses the nation’s largest solar panel installation (over 1300 of them), while wind turbines, native plantings and free-range animals, including miniature Babydoll sheep, are all part of the organic, eco-friendly mix. Before tasting the wines, you can savour many of the signature vineyard features by taking a complimentary self-guided drive on the 7km-long White Route Tour. Grab a map from reception or download the app, and delight in the volley of discoveries as you roam the Yealands estate. The expansive vistas across the undulating folds of the vineyard, and the rolling Aratere landscape, are a visual symphony of nature in harmony. 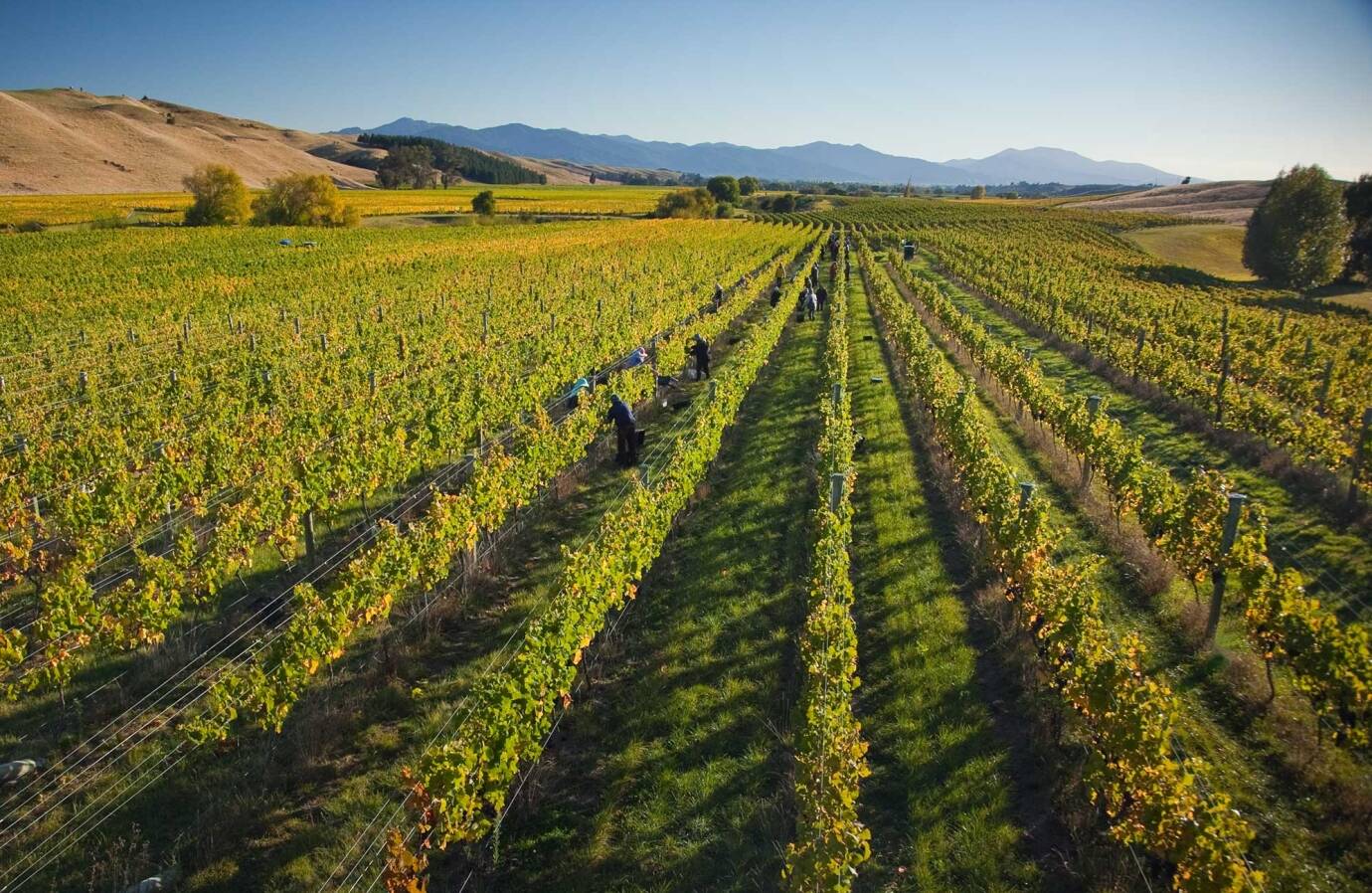 From the Awatere Valley, it’s a very short hop into blazing Blenheim, where I launched myself into more winery-hopping. I pre-positioned myself in the thick embrace of Rapaura Road’s vines, checking in for a stay at Marlborough Vintners Hotel. Cradled in the heart of the wine country, in a luxury suite loaded with all of the contemporary creature comforts, it was such a thrill to awake to the carpet of vines reaching out across the celebrated landscape, as the sunshine illuminated the Wairau Plain’s lofty bookends, the Richmond Ranges and the Wither Hills. www.mvh.co.nz

Stretching from Renwick to downtown Blenheim, Rapaura Road is wine country’s “Golden Mile”, studded with cellar doors. I joined a Winter Warmer Wine Tour with Sounds Connection, who collected me directly from my accommodation. It’s an outstanding way to immerse yourself in the magic of Marlborough, as they escort you to some hand-picked cellar doors. You do they tastings – they do the driving. Nice! www.soundsconnection.com

I was particularly excited to encounter Rock Ferry, a stirring organic winery, recently scooping half a dozen gongs at the Organic Wine Awards. The 3rd Rock Sav Blanc 2019 is a cracker, with fruit from the Wairau Valley, exuding great freshness and balanced by crisp acidity. Many Marlborough wine producers also grow red grapes in Central Otago and Rock Ferry’s 2016 Pinot Noir is absolutely fabulous, all dark plums, cherries and ripe fruit notes. I also drooled over their Orchard Vineyard Pinot Blanc 2017, a rarer variety in New Zealand, where the dominating flavours are almond and ripe pear with a sharp even acidity. It goes great with seafood. Sauvignon Blanc and oysters - could there be a better pairing?

I had my fill at Cloudy Bay’s Raw Bar, a very swish affair, swathed in well-groomed lawns and gardens, adorned in hanging egg chairs and oversized couches. It’s a glamorous cellar door, with grand views of the rows upon rows of wine oak barrels, in the cellar. The $10 Cloudy Bay tasting experience serves up their gorgeous Pelorus Sparkling Non Vintage, Sauvignon Blanc, Chardonnay and Pinot Noir. It’s a must. On the opposite side of Jackson Road, pop into the boutique joy of Allan Scott Family Winemakers, where you can relax in the shaded courtyard while grazing on local produce. For a palate change, I also ventured to one of the nation’s most decorated craft beer enterprises, Moa Brewery, the brainchild of Allan Scott’s son, Josh. Blenheim’s bounty of hospo spots is beyond abundant, but you must not miss the Dodson Street Beer Garden. In 1858, Henry Dodson established a brewery and the malthouse was housed in the same building where you’ll find this venue.

Originally home to the Wairau Brewery, the malthouse is still working today. It’s the oldest commercial building in Marlborough and Dodson Street Beer Garden proudly boasts one of the largest selection of craft beers and ciders on tap in New Zealand. 21 at last count – including the onsite Renaissance Brewing Company. More key features are the authentic German cuisine and salivating pizza selection. I love the old-timey beer hall, the trove of memorabilia and the ebullient spirit which makes this spacious venue such a perennial crowd favourite. The enterprising hands-on owner, Dietmar Schnarre, is an absolute delight. www.dodsonstreet.co.nz

I grabbed a mid-morning pie from The Burleigh, a fiendishly good producer of gourmet pies, en-route to Omaka Aviation Heritage Centre. The Burleigh's flaky pastry goodness is drooled about across the region. The sweet pork belly and steak and blue cheese pies are big-sellers, but the spicy Jamaican lamb pie takes out best in show, on my scorecard. Speaking of indulgence, nestled in wine vineyard country, Marlborough’s very own chocolate factory. Makana Confections, which also does a brisk trade in Kerikeri, offers free chocolate tastings and you can watch the chocolatiers at work through giant windows inside the chocolate factory.

For a complete change of scenery, I swapped the wines for the wings, and the vintage aircraft displays at Omaka are absolutely next-level. The two exhibition halls dramatically showcase classic aircraft from the two world wars. The original Great War exhibition, Knights of the Sky, features Sir Peter Jackson’s personal collection of WWI aircraft and artifacts. The story of aviation in the Great War is vividly brought to life in sensational sets crafted by the creative wizards at WingNut Films and Weta Workshop. Many planes are fully air-worthy, and can be readily deciphered by whether a drip tray is situated under their belly.

The magnificently theatrical dioramas and captivating scenes depict the aircraft in compelling context – some recreate actual incidents, like the plane that crash-landed into the only tree standing on Flanders. Beyond the flying machines, Sir Peter’s treasure chest of rare war memorabilia is incredibly compelling, including personal items belonging to the famous Red Baron himself. I was particularly struck by the display of artefacts connected to Hermann Goering, including the cap he was wearing in 1945 when he was captured by the US 7th Army. You’ll see his formal dress jacket and some of his log-books. 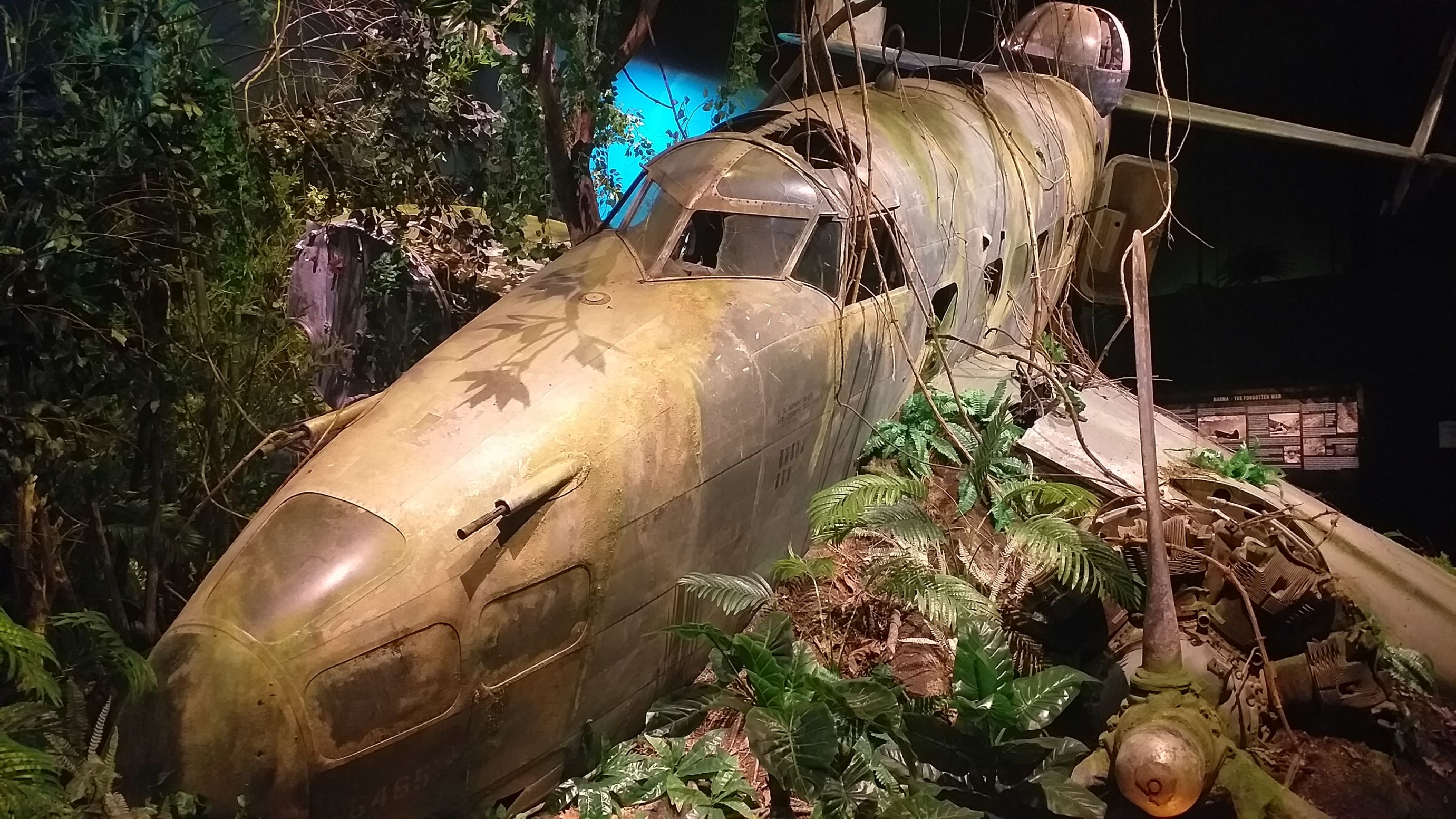 Dangerous Skies, the WWII exhibition opened four years ago and explores the stories of both male and female aviators and their tales of valour from the forests of Germany to the steaming jungles of the South Pacific. Iconic warbirds on display include a flyable Spitfire Mk.14. A variety of aviators are lustily showcased like Russia’s famous female fighter pilot, Lydia Litvyak, the “White Lily of Stalingrad” as the Soviet press nicknamed her. The sheer scale of Russia’s losses in World War II is soberly illustrated with great dramatic effect. Another favourite personal story is illustrated by the mannequin of a Kiwi pilot, James Hayter, who was shot down over England and parachuted to safety, dropping down in the middle of a garden party. The assembled lovelies promptly swooned over him and offered him a stiffener.

The collection of magnificent flying machines is indeed magnificent, but the personalised human dimension threaded throughout the exhibitions, and the storytelling prowess, packs a poignant punch. It’s the real magic behind Omaka, warranting its reputation as a place you’ll want to visit, again and again. Scenic flights, in either a vintage Boeing biplane or a Soviet WW2 Yak-3 fighter, are also available. Last month the family of deceased aviation collector, John Smith, appointed the Omaka Aviation Heritage Centre to work with them as guardians of his remarkable collection, to preserve and publicly display his trove of hero aircraft.

John’s backyard shed in Mapua was the aviation equivalent of Aladdin’s Cave, fuselages lined up parallel to one another like sardines, symmetrically arranged either side of a fully assembled Mosquito. The Smith aircraft destined for display at Omaka include a complete de Havilland Mosquito, John’s own original Tiger Moth and New Zealand’s most famous P-40, ‘Gloria Lyons’. They will join the Lockheed Hudson, formerly gifted by John, on display at Omaka. Future fundraising efforts including any profits from next April’s Yealands Classic Fighters Air Show will be funnelled into this significant conservation project. www.omaka.org.nz

Planning a trip to the Top of the South? Check out the region’s official website for the latest visitor tips and insights. www.MarlboroughNZ.com