New Plymouth is a star specimen of a plucky provincial destination punching far beyond its weight class. There’s a palpable sense of pride in the perky city’s urban vitality; it’s cultural draws, creative credentials, culinary verve and craft brew scene. The past decade’s revitalisation of the West End, magnified immeasurably by the stainless steel traffic-stopper, the Len Lye Centre, is a gleaming tractor-beam. Like a gallery wrapped in a grand and mirrored tutu, it will literally make you stop and reflect. Its curved façade is a composition of towering columns of mirror-like, marine-grade stainless steel. This is destination architecture at its finest and absolutely New Pymouth’s answer to Bilbao’s Guggenheim. Make a point to marvel at its mesmerising majesty and shifting moods with the changing light, morning, noon and night. 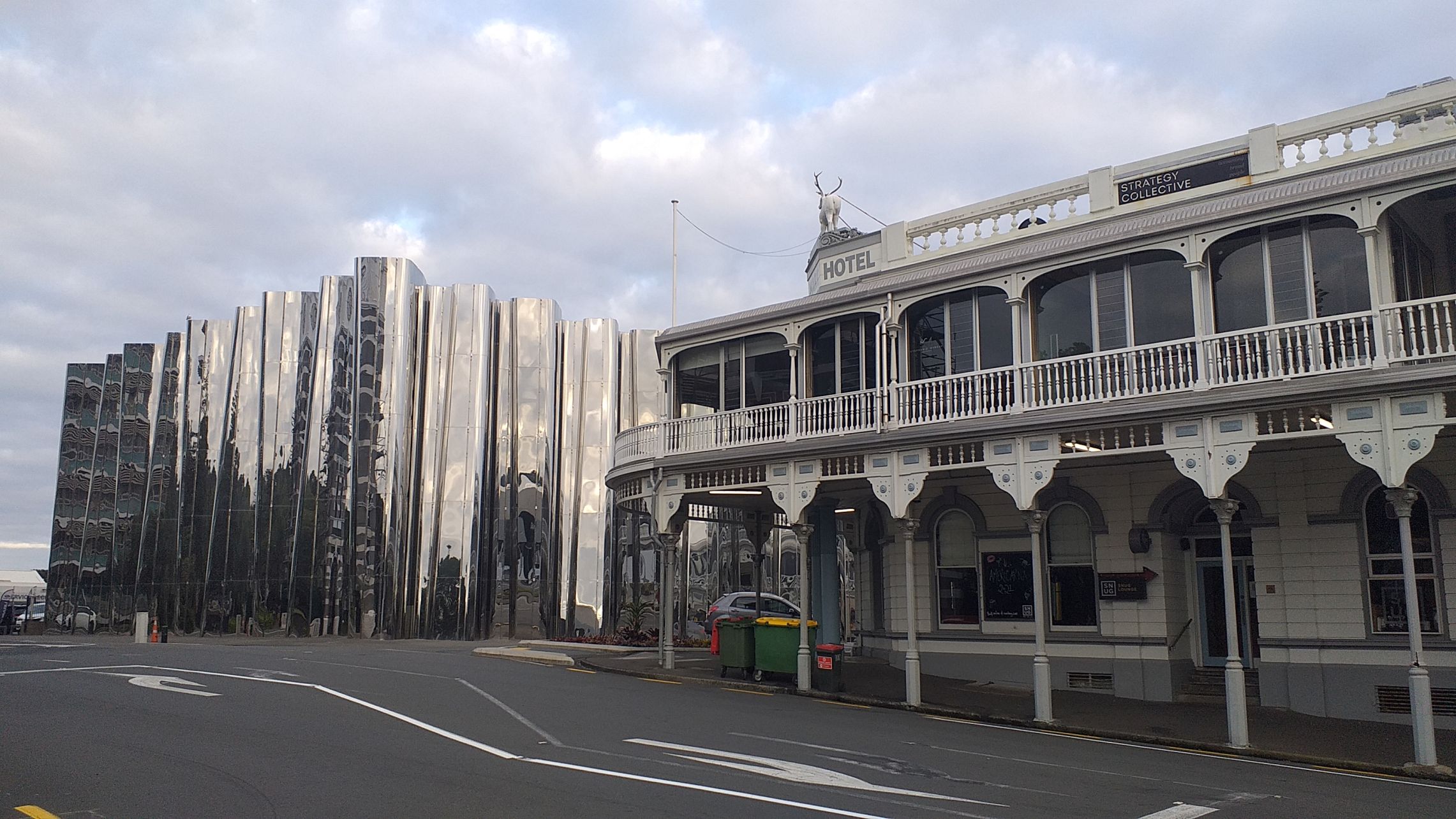 Within its reflective exterior, the Govett Brewster Art Gallery/Len Lye Centre is New Zealand’s first institution devoted to a single artist, showcasing his world-famous work in kinetic sculpture, photography and film. Our nation’s most prominent international artist, who died in 1980, left his life’s work to be housed in New Plymouth. Take your time to explore the plethora of works, although the prize draw is unquestionably the Large Works Gallery, full of wonder and whimsy, if not a little hypnotic. The exhibits are changed quarterly.

But as much as the gallery is the great anchor of the West End’s renewal, there’s a feast of neighbouring innovations and attractions to enjoy, accentuating the precinct into a cultural, food and entertainment hub. Directly across the road, on the corner of Devon and Queen Street, the colonial splendour of the historic White Hart Hotel, with its wraparound wooden verandah. Famously robbed by a highwayman in 1893 and home to Taranaki’s punk rock scene in the 1970s’, this classic hotel has been meticulously restored, housing a variety of hospitality venues and inviting shops including the interior design concept store, Plantation. Queen Street boasts some divine cafes, including Monica’s Eatery, inspired by the life and spirit of the art gallery’s founding patron, Monica Brewster.

Confession time – I’m a sucker for doughnuts. If you share my egregious weakness, a visit to The Public Catering Company is a New Plymouth essential for cravingly good doughnuts. Then there’s Fork and Knife, where customer favourites include fresh ceviché, venison loin, plus the ever-popular deconstructed snickers bar. The Arizona is the adjoining awesome street food option, which has recently stepped up a notch with new owners/chef Jeremy and Britt Webling. It’s the local favourite for takeaway tasty burgers, salads, shakes and smoothies. Alongside Fork and Knife/The Arizona in the funky new Quarter Bank, Billow Bakery is a boutique bakery, producing fiendishly good bread and pastries.

A new hero in New Plymouth’s hospitality scene is Shining Peak Brewing, that has fast cultivated a red-hot following as a social hub in its Gill St base, housed in a former electronics store. They passionately pay tribute to the region’s origins and tales while delivering a world-class experience. The name “Shining Peak” pays homage the original translation of Taranaki, while their brews share the stories of quirky local legends, like Fanny Fantham, the notorious Highwayman, or the “Octopus Clamp” – a preferred wrestling move of Hawera novelist Ronald Hugh Morrieson.

Meeting up with co-owner and head brewer, Jesse Sigurdssen, I was inspired to hear about their 5% Project, where in keeping with the tradition of a local brewery playing a central role within a community, Shining Peak nurtures many local community projects and causes by donating five per cent of their beer revenue to a different organisation, each month. That equates to around $5000 a month – which is no small beer! Whether you’re a fan of dark lager, pale ale, or a raspberry berliner weisse, Shining Peak is a warm and welcoming destination, combining indoor booth seating with traditional dining options, a bar and tasting section, in addition to a swish garden bar courtyard with retractable roof. Do not miss. https://shiningpeakbrewing.com/

An incisive and utterly enthralling way to dip deep into Taranaki’s bountiful platter of producer verve, foodie flair and culinary wizardry is to take a tour with Taste and Tales. Cathy Thurston’s guided, behind-the-scenes taste trails artfully showcase some of Taranaki's top food and beverage producers, over the course of several hours. Because most of the producers are boutique, you’ll not only savour their tastings, but you can chat to the producers and glean their inspiring insights. With eight enticing trails to choose from, I had my eyes firmly opened about Taranaki’s producer prowess, thanks to Cathy.  In addition to the regular tour options, Cathy organises special events including a fabulous weekend of festivities in mid-May, with cooking classes showcasing Taranaki produce, pizza and pasta. Check out the website for full details. https://www.tasteandtales.co.nz/

The highlights reel from my guided tour included Juno Gin, an industry darling, boasting a stirring collection of award-winning New Zealand premium gins, powered by a Taranaki husband and wife partnership, Jo and Dave James. They launched their award-winning premium gin venture in 2015 after shifting back to New Plymouth from Melbourne. They are a delight to meet and alongside their extra-fine signature Juno Gin, their seasonal releases are delectable. Their Summer 2021 Seasonal Gin features handpicked Rangpur Limes from Six Acres Farms, injecting this citrusy gin with a hint of smoky exotica.

I adore their Autumn 2020 Seasonal Gin, mellow and fruity, with strong hints of grapefruit and marmalade. Relentlessly enterprising, Jo and Dave have been at the forefront of seeking to establish a commercial industry of New Zealand-grown juniper berries, after leading the hunt for the most viable plants to propagate here, rather than importing them from the Northern Hemisphere. That exciting work is continuing in conjunction at Massey University, with the seedlings scheduled to be planted towards the end of the year. https://junogin.co.nz/

We also called in to Egmont Seafoods, a locally owned and operated fishery and New Plymouth staple for over 30 years. You could not wish for higher quality fish and seafood, direct from the trawler. An absolute heart-stealer is the suburban gem, Proof and Stock Coffee. Check them out on Instagram. This is the ultimate neighbourhood coffee roastery and servery, located in a spectacularly converted garage, at 40 Cutfield Rd. Fostering a rock-solid reputation since opening three years ago, Tane Morgan and Adrianna Greenhill are the force behind this neighbourhood coffee haunt, where a steady flow of locals will drop by for a chat, buy bans and grab a flat white on the run. How many Kiwis would love to have a Turkish coffee roaster weaving its magic in the garage? Proof & Stock is a must for a Nikau Blend caffeine fix to remember. Plus their coffees are served with fresh organic milk from Inglewood. 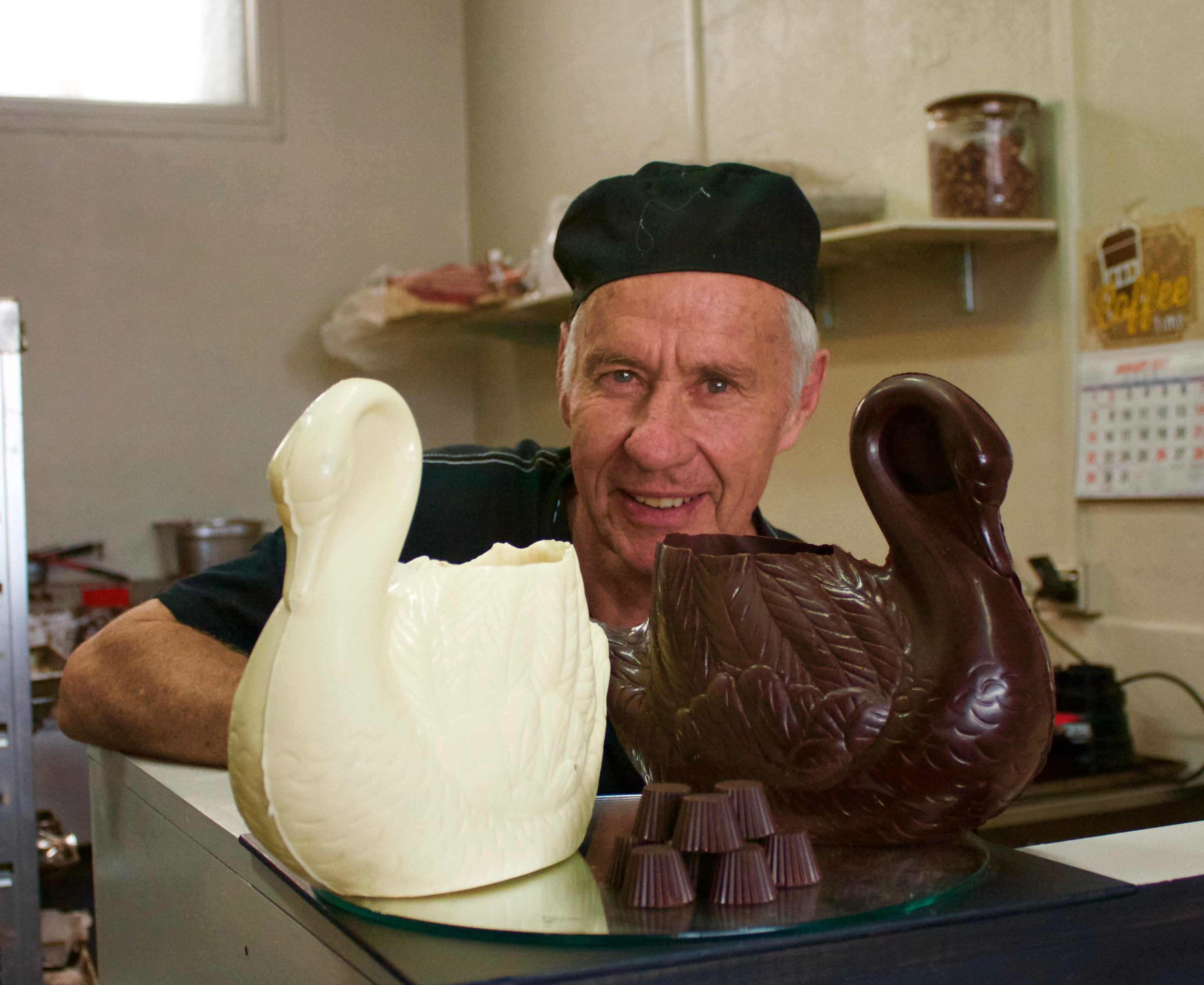 Another irresistible stop is G. Giles Chocolatier on St Aubyn Street, where Gavin Giles creates artisan handmakes chocolates. Using Belgian chocolate, Giles Chocolatier makes the traditional, the novel and unusual - including a collaboration with Juno Gin. His recent co-venture with Egmont Honey to create New Zealand Manuka Honey Chocolate is a smash-hit. Back in the day the chocolaterie was a butcher's shop belonging to his grandmother's family - Harvey's Butcher, from the 1930s. His grandmother's brother owned the butcher's shop until 1969. Nearly a century later since the store began life as a butcher, it remains a going concern for the family, again. It took a lot of will power to resist gorging myself silly on Gavin’s wonderful truffles and tablettes, and the incredible flavour range, from bacon chocolate and coconut cinnamon chocolate to black doris plum and pineapple cashew chocolate. New Plymouth’s abundance of artisanal produce will bowl you over. Stay longer, graze heartily. https://www.taranaki.co.nz/like-no-other/visit/eat-and-drink/