The Queen has stepped out in public with Prince Andrew for the first time this year after the spotlight swivelled from his disgraced friendship with Jeffrey Epstein to the abdication of Prince Harry and Meghan Markle.

The Duke of York accompanied his regal mother to church at Sandringham today, after joining her and Prince Philip for a private lunch on the Norfolk estate yesterday.

Her Majesty, wearing a black and white checkered coat, was pictured beaming as she led her suited middle son along the gravel path and into the service at St Mary the Virgin church in Hillington.

Since he was fired from frontline royal duties in the wake of his car-crash Newsnight interview in November last year, Andrew has shunned Family events and only broken cover a handful of times. But this morning the 93-year-old monarch offered him a strong public show of support as she looks to extinguish the turmoil raging through the Firm.

The Queen's desperation to move on from the past few months of royal woes took a major step last night as an agreement was finally reached over Harry and Meghan's future outside the fold.

In a heartfelt statement, she announced the Duke and Duchess of Sussex would be stripped of their HRH titles as they forge a new life in Canada.

And as a path forward was finally plotted through the Megxit crisis, Her Majesty also seemed determined to move on from the disruption caused by Andrew with a public show of forgiveness.

Although he cut a solemn figure as he marched into church, Andrew seemed pleased with his first 2020 appearance at the Queen's side and was pictured grinning as he was whisked away from the service.

In the days after Andrew's Newsnight grilling - where he was accused of shrugging off sex offender Epstein's crimes as 'unbecoming' - he was spotted from afar horseriding with the Queen at Windsor.

Far from being a show of support, this meeting was widely thought to be scheduled to express Her Majesty's fury with her son.

Since this time, Andrew steered clear of Family events and memorably avoided attending the traditional Christmas church service at Sandringham, slipping out of an earlier private service via a back exit.

But today's joint church trip was choreographed to showcase her willingness to move past the Epstein storm, and suggests Andrew is preparing to be gradually reintroduced into the royal mix.

The Duke of York was yesterday seen behind the wheel of his Land Rover with a man and mystery blonde woman following a shoot on the estate.

It is believed he stayed at the house to join his mother at this morning's Sunday service. Her Majesty was spotted smiling as she met with churchgoers, a refreshing contrast to the steely-faced expression she wore over the past week as Megxit crisis talks dragged on. 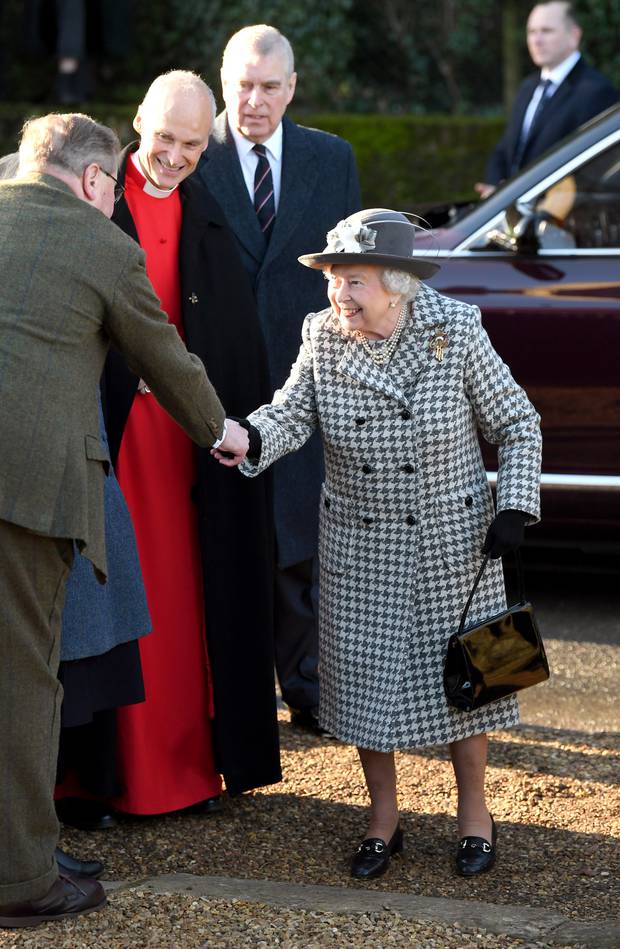 He cut a solemn figure as he marched into church but Andrew seemed pleased with his first 2020 appearance at the Queen's side. Photo / Getty Images

Crowds her gathered outside St Mary the Virgin church this morning to catch a glimpse of the Queen said she appeared in good spirits.

This is despite royal sources claiming she has been saddened by barely seeing her great-grandson Archie, who is still in Canada.

A final blueprint for Harry and Meghan's future across the Atlantic was finally hammered out at Sandringham yesterday.

It stipulates that the pair, who will be known as Harry, Duke of Sussex and Meghan, Duchess of Sussex, will cease to be working members of the Royal Family from this spring and will not perform any official duties on behalf of the Queen – effectively leaving 'The Firm' completely.

By quitting their senior royal roles, they will sacrifice their HRH title. This is despite Andrew being allowed to keep his title when he withdrew from performing engagements.

The Duke and Duchess' new website sussexroyal.com has been updated following the Queen's statement, saying: 'In line with the statement by Her Majesty The Queen, information on the roles and work of The Duke and Duchess of Sussex will be updated on this website in due course.'

Their new titles mirror the styling given to Harry's mother Diana after her divorce when she was no longer allowed to use HRH. She was known as Diana, Princess of Wales.

The change means Harry, who served a decade in the British Army, will give up his military patronages and his role as Commonwealth Youth Ambassador, but will remain a prince and sixth in line to the British throne.

Harry, who has spoken fondly of his time in the Army, will lose several military roles including Captain General of the Royal Marines, Honorary Air Commandant of RAF Honington and Commodore-in-Chief of the Small Ships and Diving, Royal Naval Command. He will also no longer be a Commonwealth Youth Ambassador.

Despite the official statements saying they would no longer be funded by the taxpayer, it is understood Harry will still be reliant on the Bank of Dad - with Prince Charles bankrolling him from the Duchy of Cornwall.