Remember when home theatre was a thing?

For somewhere between $500 and $2000, you could get a half decent sound system in a box; a head unit, three front speakers, two rear speakers and a subwoofer.

If your system was really flash, your rear speakers might even have been wireless... that is to say, they'd connect to the amp wirelessly - you'd still have to plug them in for power of course.

I once got very carried away and mounted my rear speakers on the ceiling, drilling holes and running cables down through the walls. Big job - but man it sounded good. Shame we moved really.

Then something happened. The TVs got bigger and flatter and slimmer. People stopped watching DVDs and listening to CDs, so you no longer required a head unit you could insert a disc into.

Because, let's be honest, no matter how flash your telly is, the built-in speakers always... well... suck.

JBL happens to make a very nice soundbar. And then they had an even better idea... 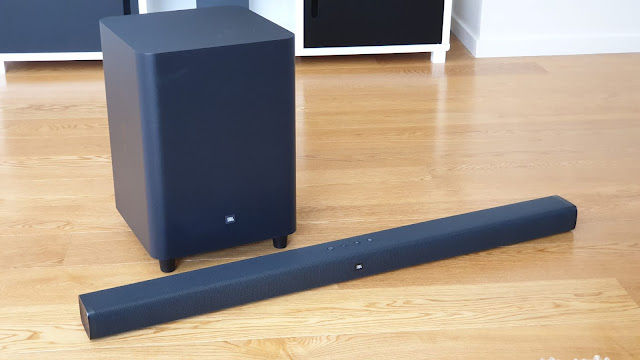 While the JBL Bar 3.1 is technically 4 separate speakers, it is of course, only two bits. the bar itself and the subwoofer, which is pre-paired via bluetooth and also huge. A big part of what I love about this system is there's nothing flashy or gaudy about it - just a tiny JBL badge in the centre of each speaker and a few subtle buttons you'll probably never use.

That's because setup is all done for you. Simply plug in, turn on and you're good to go.

The main issue with TV-only speakers is obviously a lack of bass punch. This is just stupid, given how much video content relies on big bass for impact - explosions, crashes, rumbles, basically if it's a cool special effect, it requires the womp womp of a decent subwoofer. That's before you even get to the fact you may be using this sound system as your main music machine too.

Well, as I've already mentioned, the subwoofer half of the JBL Bar 3.1 is significant. 10 inches significant. It's big and solid and wooden and has way more grunt than you're likely to require. The best thing is, you can easily control the bass with dedicated plus and minus buttons on the remote.

The soundbar itself does an excellent job of separating out voice from music and other sounds, pumping dialogue through the centre speaker and pushing the stereo stuff to either side. While there are preset EQs for MUSIC, MOVIES, VOICE etc, I found MOVIE mode to be the most versatile and usually left it on that.

While the dialogue separation trick worked well, the stereo stuff not so much. This is probably due to the reasonably large room I'm watching my telly in. I'm physically just too far away from left and right speakers that are only a centre speaker apart for any genuine stereo effect to happen.

Other than that, overall sound quality is pretty stunning. If I had to use just one adjective, I'd go with clarity. Unfortunately, that top end clarity combined with the aforementioned womping bass did sometimes leave me feeling like the mid-frequencies were being left out of the equation just a little - but I'm being massively picky.

While the JBL Bar 3.1 sounds awesome, it still doesn't really offer any genuine surround solutions, unless, like me, you like to put the subwoofer right next to where you're sitting. Then at least you can feel the bass vibrating through the sofa.

If you want more, that's where JBL's cleverest trick of all comes in. Meet the Bar 5.1...

Did you spot the difference?

The Bar 5.1 comes to pieces. On purpose. In one of those, "That's so simple, why didn't I think of it?" pieces of innovation, the rear surround sound speakers detach from the soundbar for your viewing (and listening) pleasure. Then you simply plug them back in to recharge.

Come on, how genius is that? At last, genuinely wireless rear speakers you can literally place anywhere. I've been waiting for this a long time. Best of all, it works brilliantly. Like the subwoofer, the detachable speakers are pre-paired so there's no complicated setup involved. Also, like the subwoofer, the remote has dedicated surround speaker controls so you can easily alter the balance. I found the surround effects very convincing, but the major spin-off to having separate speakers like these is they aid in keeping left and right apart. Stereo is back, baby.

The cleverness doesn't stop there. The wireless speakers turn themselves off when not in use to preserve battery life. You'll get about ten hours-worth on a full charge. Then it's just a matter of pressing the reconnect button on each speaker once you fire things up again.

If you'd prefer not keep disconnecting and reconnecting the rear speakers to the main bar (which is not tricky at all, they just slot in magnetically) you can choose to mount them permanently, but you'll need to connect a microUSB charger to each unit.

In the few weeks I've been using the JBL Bar 5.1, I've experienced a couple of rare dropouts with the rear speakers, but this was easily remedied by turning them off and reconnecting. Hardly a major.

My only real criticism is purely cosmetic.

While the magnetic connection that holds the detachable speakers on is really strong, if the soundbar is wall mounted, they still droop ever so slightly, creating a subtle, but noticeable frown effect instead of a nice, straight, horizontal line. It's a tiny design flaw, but given the overall cunning of the whole concept, it's a shame JBL didn't notice.

If the soundbar is on a tabletop or self, this isn't issue at all so don't even worry about it.

Both the 3.1 and 5.1 bars have an amazing number of HDMI inputs, five in total including an HDCP slot and the ARC slot which let's you control the soundbar from your TV remote. You can also connect via bluetooth, optical or standard 3.5mm cable - but seriously, why would you?

There is a subtle white LED display to let you know when the soundbar is on, off, charging speakers, connected to bluetooth and other sources, that sort of thing. It can be dimmed right down (again, an easily accessible dedicated button on the remote) and disappears completely when not required. I love all that because the last thing you need is something lighting up and distracting you from the TV itself.

Another thing I like, as you may have guessed by now, is the remote itself. It's light and as I've pointed out many times, has actual, physical, dedicated buttons for all the functions, even including audio sync, allowing you to adjust any minute delay between what you're seeing and what you're hearing.

$800 might seem a lot to pay for a soundbar and I agree. Even though the JBL Bar 3.1 includes an ENORMOUS subwoofer, there are other options out there that do a similar job for less dollars.

I don't think $1200 is too much to spend for a quality surround sound home theatre, which is what the JBL Bar 5.1 definitely is. So get that one. It's just so clever.

Click here for more information on the JBL Bar 3.1

Click here for more information on the JBL Bar 5.1