A lot can happen in six years.

It's been six years since I last spent any time inside a VR headset. That was the Samsung Gear VR; a colab between Samsung and Oculus that enabled you to insert your Galaxy handset into an Oculus headset to experience all the wonders of 360-degree gaming and viewing... well, all the wonders available back in 2015.

To be honest, there weren't many wonders.

It was fun to watch movies in a virtual, 3D theatre and there were a few purpose-filmed surround-videos to sample but any games on offer were super limited and it only worked with a few specific models of phone.

Since then, Oculus has been busy. Very busy... 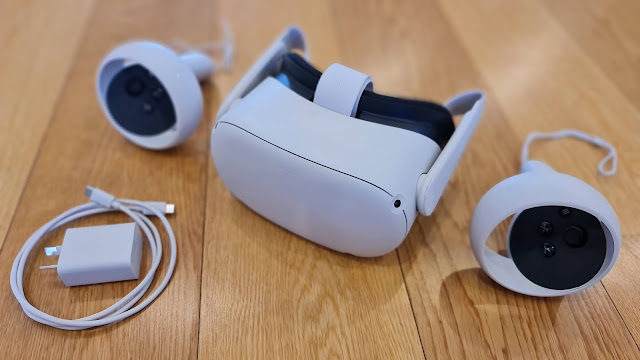 I have to admit, I haven't really been paying attention. I was vaguely aware you could buy expensive Oculus headsets that plugged into even more expensive, high-powered gaming PC's. I assumed this was the niche realm of the ultra gamer geek and I left them to it.

But somewhere along the way, the Oculus Quest was born - no longer tethered to a PC, a standalone, totally self-contained device. Sadly, one I never took any notice of.

Now there's a new generation; the Quest 2 and believe me, Oculus, you've definitely got my attention now. 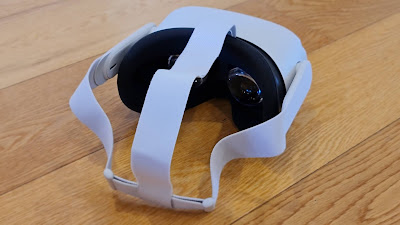 To start with, it looks more friendly than some of the all-black, multi-cabled options we've seen before. The Quest 2 headset and its Touch Controllers are an attractive off-white colour, with a comfortable, three-way adjustable, fabric head strap. There's really not much to see from the outside; other than the four small cameras, there's a power button with tiny status LED on the right-hand side, USB and 3.5mm AUX-in sockets on the left and a volume rocker underneath - all easily located by touch when wearing the headset.

The Quest 2 is one of those rare pieces of design excellence that just works like it should, straight out of the box, with virtually no setup required, short of signing in with your Facebook account. Some people go crazy about this, worried about having to hand over all their private details to Mark Zuckerberg just to play a few games. I don't get all the fuss; for starters, Facebook owns Oculus anyway so if you have an original Oculus account, Zuck's got your deets already. Secondly, it just makes logging into stuff and buying things so much more seamless - you need to pair the Quest 2 with the Oculus app on your phone for example - this happens pretty much automatically once you've logged in with your Facebook profile. What's more, you can actually use apps like Messenger inside the VR, so that's helpful, not harmful. Besides, if you're that worried about it, it's not exactly the hardest thing in the world to set up a separate, gaming-only Facebook account. People need to chill out. 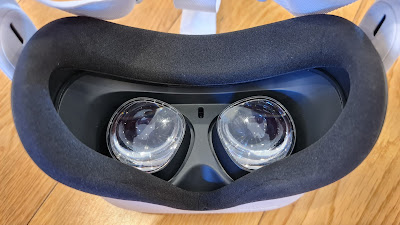 Logging in really is the most complicated part - assuming you can get the headset to fit right in the first place. I found the combination of velcro and plastic sliders on the head straps simple to adjust to where I wanted them and the device feels perfectly balanced when in place. Apparently it's lighter than it's predecessor and I certainly found the foam padding comfy as. My issue is my glasses. While the Quest 2 ships with a glasses spacer in the box (again, easily attached) my glasses are too wide to fit in the headset. Although you can adjust the space between the lenses, glasses-wearers need to know it'll only accommodate your specs if they're less than 142mm wide and under 50mm tall. Elton John may be out of luck. Thankfully, I found an old (less fashionable) pair that just fit. I would have been screwed otherwise as the experience isn't calibrated for the shortsighted.

But what an experience. 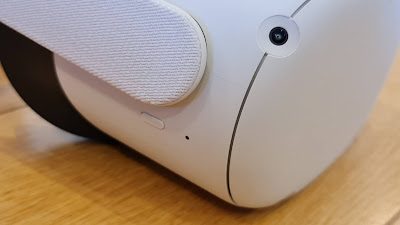 Firstly you're asked to mark out your virtual Guardian boundary - you're shown your surrounds via the passthrough cameras and you paint where the clear area is with your touch controller - recalibrating the height of the floor if need be. You also have the option of a stationary Guardian if you prefer to stay seated. Ingeniously, you can choose to change to the passthrough view if you break through the virtual walls of your Guardian while playing, thereby avoiding smashing into furniture or real walls. But even more ingeniously, the Quest 2 remembers the position of your Guardian area between each session, so you don't have to mark it out again. See? Pretty clever.

Long gone are the handful of low-res, half-hearted, pretend games I first tried out six years ago. The Home screen is jam packed with game and viewing options, many of which you can jump straight into. That home screen is fully customiseable of course, with a choice of backgrounds to suit your tastes. I was really blown away by the explosion of content now on offer, with the promise of much more to come. There's an extensive library of games for sale, which we'll get into shortly but there's an amazing amount of viewing available, mostly free of charge.

In the last few days I've been swimming with sharks, ridden a rollercoaster while in orbit above the earth, hung out with elephants - even jumped out of a helicopter in a wing suit and flown over snow-capped mountains at breakneck speed - all in totally immersive, 360-degree wonder.

There are more and more live events to attend too, although my schedule didn't allow me to get to Snoop Dogg's live DJ Snoopadelic set the other day.

Oh, you can definitely spend a lot of time in here.

There are apps like Bigscreen and Venues where you can create your own avatar, meet other users and watch movies, concerts and seminars together. Bigscreen is particularly versatile. Here you can watch movies, either stored locally on the Quest 2 itself or via a DLNA media server on your Wi-Fi network, or even join one of dozens of live TV rooms - from Nikelodeon to Rocketlabs. You can also share your PC desktop to Bigscreen, potentitally meeting clients or work colleagues for presentations or to collaborate on projects.

There's a native Netflix app, complete with virtual home theatre or you can go online via the browser to access any other content out there.

Then there are the games. Oh boy.

Obviously, you can play sports. And because it's VR, you can do things like play tennis with a fish and a football. Yup, Sports Scramble is crazy... or you can just go bowling. Obviously you can scythe your way through floating targets with dual light-swords to a funky soundtrack in Beat Saber, or you can shoot cyborgs in the head while dodging their bullets in the arcade-style Pistol Whip. 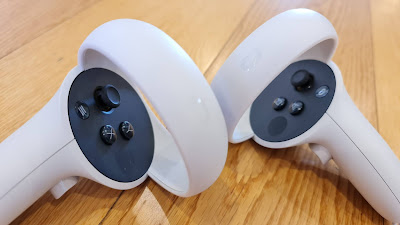 It's hard to accurately describe just how intuitive using the touch controllers is playing these games; more than just a deconstructed gamepad, the addition of a side trigger on the inside of each controller handle means actions like picking things up, opening doors or taking items out of your backpack seem totally natural. In Population: One, a classic first person shooter, when you do things like climb up drain-pipes hand over hand, there's no learning how - you already know how.

Perhaps the most brilliant execution of a 360-degree VR gaming experience I've tried yet has got to be The Walking Dead: Saints and Sinners. You have a torch in your harness which you have to grab and shake to keep charged. If you're lucky enough to find an axe, you'll need to hold it with both hands to kill the zombies. This game is unreal. No wait... it's seems really real.

All these incredible visual illusions are enhanced by the Quest 2's speakers, subtly built-in to the side straps on the headset. You can also choose to plug in your own headset via the 3.5mm jack or you can even pair bluetooth headphones or buds... the surround sound effects are spot on but be warned; once you're in this virtual world, it really is very convincing - and not just on an audio/visual level. Your whole body is fooled into thinking you're on the tennis court or fighting zombies for a gun on a boat in a flooded New Orleans.

On the bright side, this can be quite a workout - in fact, using Oculus Move, you can set up a virtual display to tally calories burned and time spent playing. On the downside, I've had to end several sessions using the Quest 2 due to motion sickness. I'm not making this up. Spend too long jumping off buildings and dodging robots and you might actually puke! Some games even let you adjust the "reality level" to avoid nausea, so if you have a weak stomach, this device might not be for you.

I've read people questioning the Quest 2's battery life; between two or three hours depending on how hard you're pushing it but take it from me, if you can last two hours of non-stop zombie stabbing, you deserve a medal.

As a standalone mobile device, the Quest 2 does not have the processing power or graphics ability of a dedicated gaming console or PC - this means some games are a little slow to start up and picture screen quality, while awesome, is far from 120Hz-4K-gaming-monitor awesome. However, the processor is among many other hidden upgrades from the original quest, a 90Hz screen refresh rate update is on the way and I found operation to be super smooth with very few stutters, lags or crashes.

None of those technical details matter much once you're using it, it's just so fun.

By the way, there's also an optional Oculus Link Cable available to connect you to a compatible PC. This opens up an even bigger world of more powerful VR games if you really want to get carried away.

At $569 for the 64GB version and $739 for the 256GB model, I think the Quest 2 is fantastic value. It's a unique, multimedia experience that's easy to set up, it's totally self contained and all for less than the price of a modern gaming console.

I'm sure the nausea will wear off eventually. Totally worth it. I wonder if motion sickness pills would work?

Click here for more information and pricing on the Oculus Quest 2.