In fact, when it comes to gadgets, I'll actively seek out the one that either doesn't have any lights, or has the option to turn them off.

I don't need something to light up to tell me the thing I'm using is on. If it works, it's on.

And I definitely don't need a red light to tell me something's off. What's that about? (TV manufacturers, I'm talking to you here)

Sure, status lights can be useful when setting up things like Wi-Fi routers to show if you have a good connection but after that, I want them off.

Except Christmas trees. They're allowed to flash a bit.

This is why I love smart lights so much; for the opposite reason to everyone else - I can turn them off just by telling them to.

So why on earth would Philips send me a box of flashing lights? 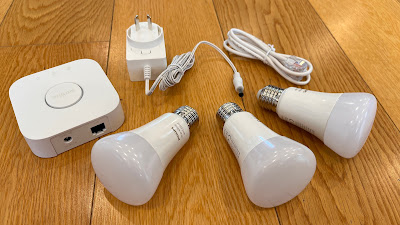 The Starter Kit won't take a lot of explanation - I think by now we're all pretty aware of what a smart-bulb is and what it can do. The Philips Hue range has a reputation for being about the most full-featured, reliable and versatile out there - with a price-tag to match. Even if you shop around for this three-bulb kit, you're not likely to get much change out of $300. However, it does include the essential Hue Bridge - the all important little white box that connects straight to your router. While some smart bulbs talk directly to your Wi-Fi, or perhaps via other bluetooth devices, Hue lights take the pressure off your home network by using the Hue Bridge to create their own.

Setup is done, of course, via the Hue app. This is very straight-forward, with one important caveat; be sure to follow the instruction about keeping your phone close to the device during setup. I didn't do this first time out and was left waiting for ages for a firmware update that never completed.

On my second, much closer, attempt, I was up and running in mere minutes.

There's not much to the Hue Bridge - a large, central button for pairing purposes and three of those annoying, blue status LED's I was complaining about earlier. There's also a blue ring around the central button to show the status of the Zigbee network (how other smart devices connect to this one) You can't turn these off at all, which is very annoying as they light up my entire entertainment unit at night with a boy-racer-like glow I never asked for. Maybe I can find a box to put over this box. 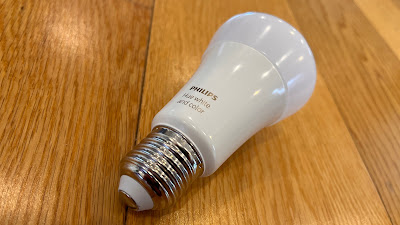 Once you've set the Hue Bridge up, you can add any lights you have, using the app to create rooms, download templates for different colour schemes, even connecting to virtual assistants like Amazon Alexa, Apple Home (Siri) and Google Assistant. At this point any lights you've connected can be set to any brightness or colour imaginable, which is pretty fun, especially being able to say things like, "Hey Siri, change all the lights to red."

But that's only the beginning.

Philips Hue now features Spotify intgegration. This means party lighting has become completely automatic. Simply use the Hue app to link to your Spotify account and a specially designed algorithm (isn't there always an algorithm?) creates a unique light script for each song, matching things like tempo and mood. I don't fully understand how lights can reflect genre, loudness and pitch but pretty lights change colour when your music plays, so that's cool. The best thing is, it isn't dependent on what device you're playing the music through - be it a bluetooth speaker on a shelf or your surround-sound home theatre - the integration happens through the app on your phone, so there's no extra pairing required. 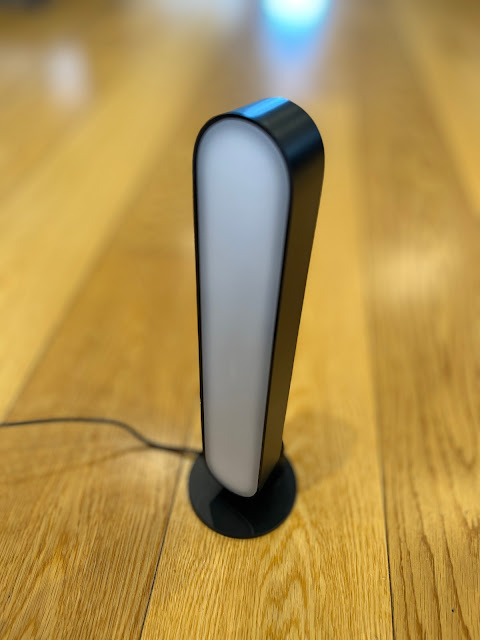 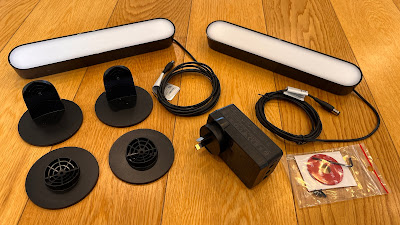 Some other lights you might like to throw into that mix are the Hue Play Bars - lightweight, longer lights specifically designed for use behind TV's and computer monitors. I really appreciate the design of these bars - versatility is key. There are stands included so you can place them vertically on a shelf or the floor. Alternatively, the Play Bars come with other hardware to mount them on the wall or the back of your TV - or you can just lie them down horizontally. 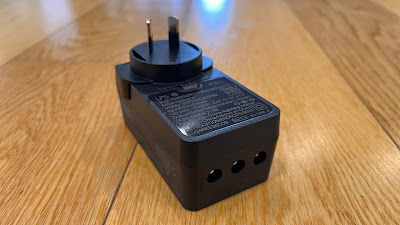 The front panel diffuses the light evenly over quite a wide area and there are long power cables that connect to a single power adapter.

In fact, you can connect three bars to one adapter... or let's really get the fun going and plug in the Hue HDMI Sync Box instead. 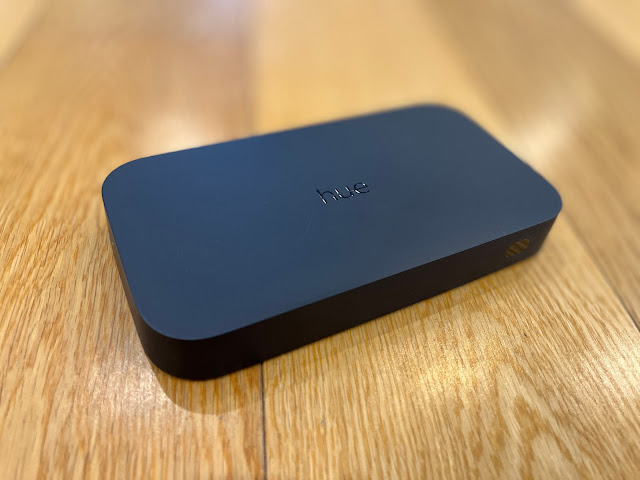 About the size and shape of an external hard-drive, the Sync Box has four HDMI inputs and and an output to your TV. Oddly, to set this device up, you need to install a second Hue Sync app, which integrates with the Hue network you've already created through your Hue Bridge. Confused yet? Don't let me put you off, the app will walk you through it step by step and it's not really any more complicated than pairing the Bridge was. 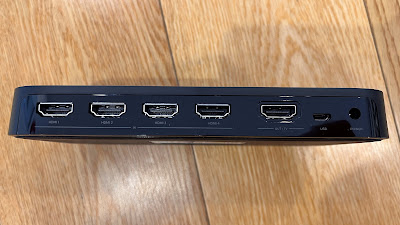 The idea is, instead of plugging your Chromecast, Apple TV or gaming console directly into your telly, plug them into the Sync Box instead. Then your Play Bars, (or any other Hue lights you group together) will emulate what you see on screen - and I mean exactly. I thought I was going to find this annoying and distracting but from the moment I saw it in action, I loved it and now I never want to watch TV any other way. 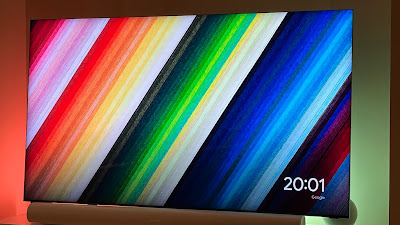 The goal is to create a more immersive viewing experience and Philips has achieved this trick admirably. Today I was watching a movie called, "SAS: Red Notice," which opens with a pretty full-on military attack on a village at night - guns, explosions, fire - that sort of thing. it seemed like every burst of gunfire and explosion was amplified instantly with a light beyond the screen. There's no latency at all and you can wind the brightness up or down to suit the ambient conditions. I really felt like I was inside the movie, not just looking at it.

I'm no gamer (in fact, I don't even own a console) but I imagine if I was, the immersive experience offered by the Sync Box would be worth every penny. Well... almost every penny... like everything Hue, this thing is not cheap - around $550.

And before you race out to grab one, you need to know, there is a serious flaw in this otherwise premium piece of tech - it won't work for any of the built-in apps on your TV. This is a major for me because that's how I watch Netflix, Apple TV+ and Disney Plus. The problem is there's no way to feed the video out of your telly and back into it again through the Sync Box - how annoying is that? I don't know why Philips hasn't managed to solve this with their own TV-based app or something.

You can workaround to a degree by using the mobile versions of some of these apps and running them through your Chromecast but that's not ideal. I've also had issues running several devices through the Sync Box at once. Supposedly, it will automatically select each source when they're switched on. Trouble is, most of us prefer to leave things like streaming boxes and Chromecasts powered on all the time. Yes, there's an IR receiver, so it's technically possible to program a universal remote to change sources but that's pretty fiddly. Also, many modern TV's are set up to connect to different devices in different ways - forcing up to four of them to communicate with your telly via one cable is bound to cause a few issues.

That being said, when using it as designed, one device at a time, the effect is spellbinding.

Is it worth the $550 for the little box? And the $300 for the Hue Starter pack? (Remember, you still need that Hue Bridge to make anything work) Oh, and I almost forgot. $250 for the Play Bars? Didn't I mention that?

It's only money right? And now you've used your holiday cash for that jet ski, boat, spa, labraspoodle and air fryer, what else are you going to spend it on?