Like most people who live with back pain, I love a massage. The problem? There never seems to be anyone around who's prepared to give me one. So annoying.

To prove not all technology needs to plug in or charge up to be a new innovation, I've been spending a lot of time lying down on my latest gadget. 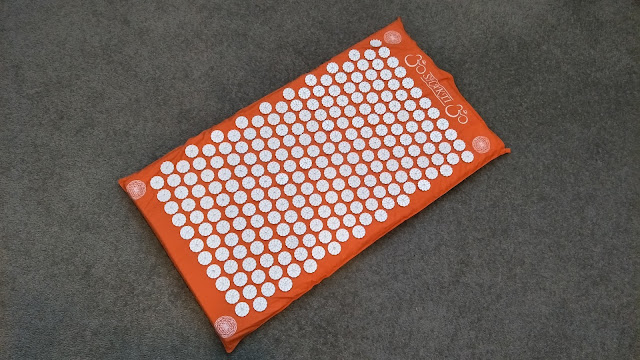 The Shakti Acupressure Mat doesn't heat up, it doesn't vibrate and it doesn't administer little electric shocks. In fact, it seems too simple to be true. The Shakti Mat is a padded, hand stitched cotton mat with dozens of harmless-looking plastic discs sewn on.

I say harmless, but appearances can definitely be deceiving. Turns out the Shakti Mat is designed to poke you with about 6000 sharp points, all at once, a bit like a bed of nails. I know; sounds absolutely horrendous - and at first it is, but only for a few moments. Before long you find yourself flooded with a warm, calming sensation. I wouldn't say it's an entirely comfortable way to spend 10-20 minutes, but then neither is a full-on massage and here's the crazy thing, I found the after effects to be very similar.

The concept originated in Sweden, home of the sauna, the jacuzzi and powerfully built blondes with strong hands - these people know how to relax your muscles. What's more, they've added "thousands of years of yoga tradition" into the equation. Basically they've combined the world's most relaxed people with the world's most relaxing exercise regime.

To make your Shakti experience even more soothing, you can rest easy (deliberate pun) on your hand-sewn mat secure in the knowledge it was crafted in the holy city of Varanasi, India. According to the accompanying brochure, the women who make the Shakti mats are "paid well, given good working hours, provided with meals each day, sick pay and free health care for them and their families." So you're definitely not exploiting anybody by lying around on their mat.

Basically, you put whichever bits of you that are giving you grief on the Shakti Mat for as long as you can stand it and they usually feel way better afterwards. My back and shoulders harbour the lion's share of my tension, so I generally spend 20 minutes with the mat between me and my bed before I go to sleep. This seems to ease any aches and pains and has the bonus effect of putting me in a kind of sleep-ready stupor, even on a Sunday night when I often struggle to get back into my weekday sleep routine. (When your alarm goes off at 2:55am, you don't want to be tossing and turning for too long the night before)

I've found the Shakti Mat quite addictive, using it behind my neck and shoulders while watching TV and standing on it to sooth sore feet. (While this feels amazing afterwards, it's excruciating at the time, given your entire bodyweight is focussed on a smaller surface area. That's probably why Shakti Mat recommends just 2-5 minutes for feet) I've even tried resting my stiff achilles on the rolled-up mat after running and high-impact workouts. I don't know if it's just psychological, but I really do feel better as a result.

There must be a downside, right? Well, not really. I can't even quibble with the price - at only $69 the Shakti Mat is probably considerably cheaper than most massage treatments and you can treat yourself to it whenever you like. I do have an issue with the choice of colours; there are 3 versions of the Shakti Mat - Light, (more spikes so less intense) Original, and Advanced (less spikes, so more terrifying). Unfortunately, choice of colour is restricted to yellow or violet for Light, green or orange for Orignal, and blue for Advanced. Obviously, who really cares what colour the thing you're lying on is? I'd still prefer a red one though.

The other issue is, this thing is quite hard to handle. Did I mention it's covered in spikes? I know that sounds obvious, but quite seriously, if you scrape part of yourself across the Shakti Mat instead of using it as it was intended, you could potentially draw blood. That's why, when you're not using it, it's probably best to keep it safely rolled-up in the organic cotton bag it arrived in.

Those minor niggles aside, the Shakti Mat definitely fits into my favourite gadget category; simple but effective. I can honestly say it eased my pains, relaxed me and helped me sleep. Not bad for a bed of nails in a bag.

Click here for more details on the Shakti acupressure mat