It seems like my whole life computers have never got any cheaper.

As far as I can tell, this is because as various components become less expensive to produce, they also become obsolete, superceded by the latest, more expensive tech.

In fact, sometimes new tech also means extra tech - and of course, if you're adding stuff you're also adding to the price. So instead of getting cheaper, sometimes this year's laptop is more expensive than last year's.

But then I guess every now and then there's an exception that proves the rule. 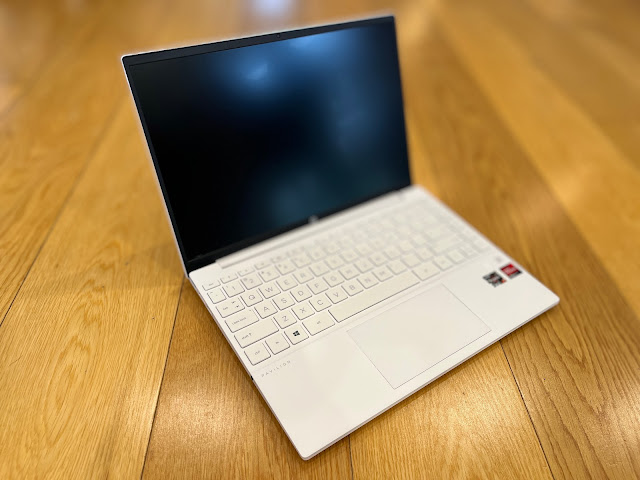 When my review unit of the HP Pavilion Aero 13.3 arrived at my house, I assumed it must have fallen out of the box somewhere in transit. But no, it was in there. It's just lighter than the box. Weighing in at less than a kilo, this is one of the lightest laptops I've ever used. 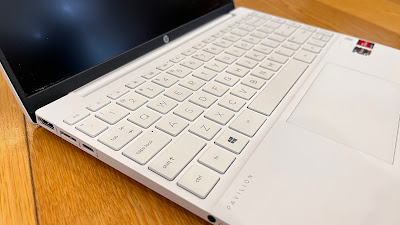 Right away, if you're considering a tablet based solely on the added portability - perhaps for school or uni - make sure you check out the Aero 13.3 first. Not only is it light, it's slim too. The whole design is brilliantly thought out - just thick enough for a full-sized HDMI port on one side, yet the two USB-ports (one on each side) feature a compact, pull-down form-factor to save space. 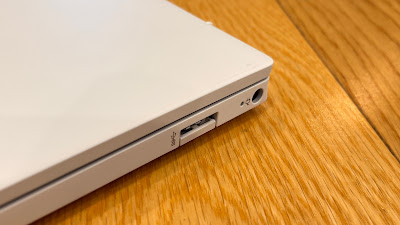 There's also a USB-C, a headphone/mic jack and a barrel-socket for the compact AC-adapter. Not that you'll need to take that adapter with you as the Aero can charge via the USB-C as well. The magnesium-aluminium alloy chasis is what keeps everything so light and also lends a super-modern look and feel to the whole setup - especially given I've been sent the Ceramic White variant. So cool.

I wouldn't go so far as to label the Aero as classy or elegant - it's a bit too funky for that. Also the screen is surrounded by glaringly contrasting black plastic bezels, albeit very narrow bezels. 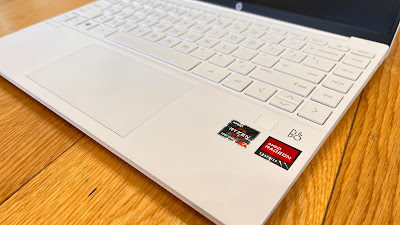 The backlit keyboard is well spaced out, with nicely responsive keys and plenty of function keys like Home, End, Page Up and Page Down. The touch-pad, while not silky smooth is a generous size in proportion to the rest of the device and this aids greatly in precise cursor control.

On firing the Aero up, I was given the choice between installing Windows 10 or Windows 11 - a nice touch given just how new the new version is. In saying that, I went with 11 and have had zero issues whatsoever.

In fact, I've had no issues of any kind. This tiny little thing is a bit of a beast in disguise. The brains of the operation is AMD's Ryzen 7 5800U processor, teamed up with Radeon graphics, 16GB of RAM and a whopping 1TB of storage. Everything works. It works fast, smooth and all the time. That AMD chip is also impressively economical when it comes to battery life - HP suggests 10 hours use and I'd suggest that's about right, well above average for most laptops.

There's a bit of pre-installed bloatware which some people find annoying. Personally, I'm more than happy to have utilities like HP Support Assistant on hand to ensure drivers are up to date and everything's running at its optimum, although I was a little surprised to see a link to the Amazon store automatically pinned to the taskbar on startup. That was kind of weird. But removable.

The 16:10 WUXGA IPS display is bright, crisp and clear - with an anti-glare surface that actually does defeat reflection. A great screen for watching video and yes, even gaming. Like I say, there's plenty of power here - both processing and graphics-wise. I've wasted several afternoons blowing away cyborgs in Destiny 2, my current favourite first-person shooter. I even utilised that full-size HDMI to play it on my telly's big screen, converting the Aero into a kind of gaming console. It continued to run cool and quiet and never skipped a beat. 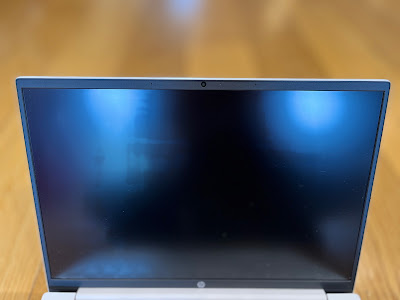 The Aero's HP Wide Vision 720p camera is solid enough, although it struggles a bit in backlit conditions. It isn't a Windows Hello lens either, so you'll have to rely on the dedicated fingerprint sensor on the right palm-rest if you want to log in without a password. At least there is a fingerprint option - not always the case. The dual-array digital mics do a nice job of picking up my voice clearly - the most crucial element when it comes to video calling.

The Bang and Olufsen speaker array lacks a little bass punch and stereo separation as most laptop sound systems do. However, the B&O Audio Control app offers quite effective EQ and noise reduction functions which mean I've been able to enjoy the latest NZ Top 100 quite happily as I write this.

In short, the Aero 13.3 is a joy to use, primarily because it does everything you want it to with no fuss and no effort. Traditionally HP's Pavilion range has meant more budget-friendly machines with less bells and whistles but this device just doesn't feel like a compromise. It feels like serious value for money... and you can put it in your bag and not even feel it.