By now you'd think this is the review that practically writes itself.

Every year Samsung comes out with its new line of tellies and every year I fall head-over-heels in love with them and every year it's kind of heart-breaking when they come and take my review set away again.

But this year I find I don't quite know where to start.

Remember; these are the guys that brought you the QLED panel, the One Connect box - they were first to bring 8K to New Zealand - how does it get any better than that? Can there really be another chapter to the story of TV excellence Samsung has been writing so successfully for so long?

Definitely. In fact, this year it seems as though it's more than just a chapter - it's more like a sequel... The Samsung QN900A introduces a whole new evolution in display technology for Samsung, moving from QLED to Neo QLED. As I understand it, this means much smaller LED's and more of them - a whole lot more. Samsung calls these Quantum Mini LED's and because they're 1/40th the size of the previous generation, you get ten times the number packed into the same sized panel.

The benefits to this are a brighter, sharper image and if you thought 8K already looked good, wait till you see the illusion of depth this technology creates, on either a 65", 75" or 85" display.

Although we're now several generations into the 8K revolution, there's still very little native 8K content out there. I felt like I used to say that all the time about 4K but that content turned up eventually and I'm sure we're not far away from higher definition offerings from the likes of Netflix and Amazon. 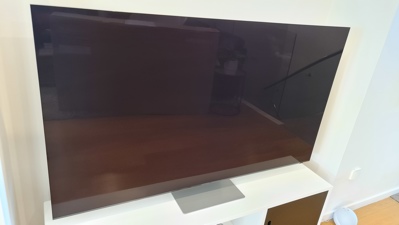 Not to worry; the upscaling abilities of the QN900A's Neo Quantum Processor are second-to-none - I've found even 720p and 1080p footage still looks next level on this screen - and part of that is due to a massive improvement in how black the black bits are. For years the QLED critics out there have trumpeted the absolute blackness an OLED display can produce due to the fact each OLED pixel basically lights itself or turns itself off completely. I'm no physicist but whatever Samsung has done here with these new Quantum Mini LED's makes a noticeable difference, especially in nighttime action scenes.

The adaptive brightness is also especially impressive. I've read reviews where people have suggested the QN900A's screen is too reflective - despite a special coating designed to combat this. I have to wonder if recreational drugs are legal where those reviewers live because they're not looking at the same panel I am. My living room gets very bright on a sunny day and there's also a window directly behind my couch - the couch I usually sit on when I'm watching TV. The QN900A doesn't even break a sweat, ratcheting up its own brightness so I can still make out June crawling through the rubble of a bombed out, post apocalyptic, Handmaid's Tale Chicago with no issue whatsoever.

I've also read criticism of whites bleeding into blacks, affecting the sharpness of the contrast. My god, there are some nerds out there. Yes, it's probably true if you had a static image of black and white stripes on screen, because the image is so bright, the white bits might dominate a bit. However, if you're sitting at home staring at an image of black and white stripes, I think you've got other issues to worry about.

Now let's back up the truck and actually take this thing out of the box. 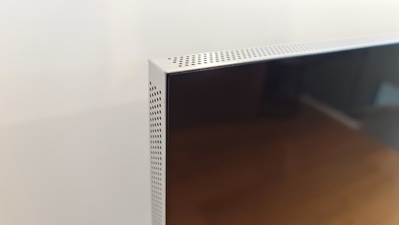 The QN900A is perhaps the most boring looking TV I've ever seen. That's not a criticism. That's what you want. The bezel is practically non-existent. And the panel itself is only 15.2mm thick. Combined with a very muted, unobtrusive central stand, when switched on the effect is like a hovering portal into another world - all picture and no TV at all really. Unlike last year's version, the QN900A stands straight up and down again, not at a slight angle for enhanced viewing - I don't really know what that was all about but the 2021 model looks just fine from anywhere in the room. 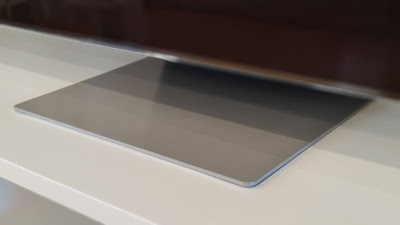 That stand is a more robust affair than most previous efforts and it's slightly more complicated to assemble, arriving in three separate pieces. I think this is partly due to another big difference with this year's model. 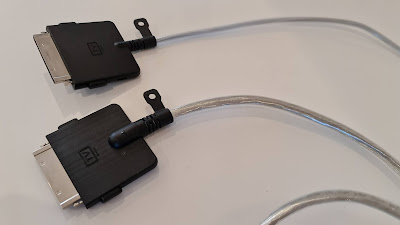 If you're not familiar with modern Samsung TV's, many of them are designed to work with a separate One Connect box. This basically moves all the ports and cables away from the panel and lets you store them somewhere more convenient - or more invisible, like in a cupboard. This leaves you with just a single One Connect cable running from the box to the screen - so subtle you may not even need to conceal it even if you're wall mounting the TV. Or at least... it used to be. Now, because there are ten times more LED's to power up, the One Connect cable is a lot thicker and not nearly so subtle. This is a shame because I consider the One Connect system to be a real point of difference for Samsung - at least it's still only a single lead. 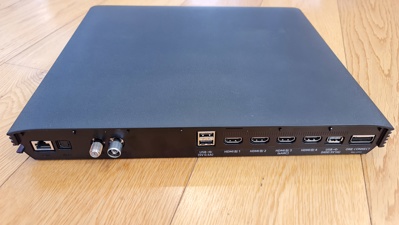 However - while the cable is thicker, the One Connect box is now much slimmer and can even be fitted snugly into a purpose-built cavity on the back of the stand where you can't see it. My initial reaction to this was one of de ja vu - aren't we effectively reattaching all those cables to the back of the TV again? 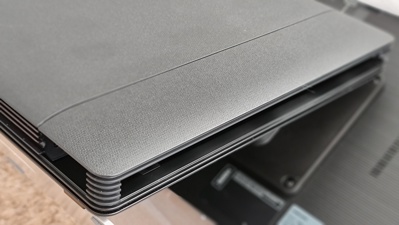 Yes, it's all very tidy - there's a special cover included to help keep all the cords out of sight - but attaching the One Connect box back onto the TV itself just seems kind of regressive to me. At least you have the option and the new model is so slim it will easily slide down behind or possibly even under your entertainment unit.

Another change for 2021 is the remote control. While the layout seems familiar - including dedicated shortcut buttons for Netflix, Amazon Prime Video and browser, the moment you pick it up you'll detect the difference; it weighs practically nothing. Flip it over and you'll see why. 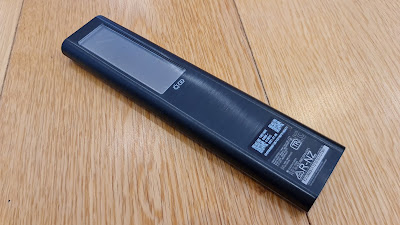 There's a large solar panel on the back to keep it charged - no batteries. This is one of those why-hasn't-anyone-thought-of-this-before innovations and it'll mean a few million less batteries in the world. Kind of weird they put the panel on the back... there's room below the controls and remembering to leave it face down on the coffee table means undoing decades of muscle memory. Great idea though and if it ever does go flat (it certainly hasn't while I've been using it) you can manually top it up via a USB-C port at the end.

Interface-wise it's pretty much business as usual. Samsung continues with its own Tizen OS which provides an uncluttered, easily navigated selection of shortcuts at the bottom of the screen. There are more options on offer when it comes to multi-tasking; for example you can plug in a USB camera so you can check your form while following a workout video while watching a movie. Yep, why do two things at once when you can do three? There are suggested templates on offer to help set this up - maybe you'd like to watch two sports games at once or mirror your phone's Insta feed while streaming your favourite show.

Following on from last year's big advances, the sound system on the QN900A is decent - the object tracking and stereo effects are quite convincing, especially when experienced from relatively close up. Samsung has packed a lot of speakers into this skinny panel and because they're side-firing, they'll work just as well when wall mounted. 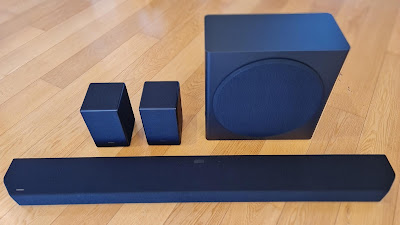 That said, the difference between the TV's built-in speakers and a good quality soundbar system like the new Q950A is still night and day. The soundbar itself is very large, again jam-packed with a whole array of speakers firing all frequencies in all directions. Teamed with a big, ole subwoofer and two beefy, rear surround bookshelf speakers, the 3D sound effects on offer are quite spectacular. Personally, I'm not a fan of the chunky, angular look of the soundbar but that's just down to personal taste. I can't deny it nestles perfectly under the QN900A panel and I also can't deny the Domestic Manager thinks it looks great - therefore my opinion is irrelevant.

I've found the best way to tune the Q950A soundbar system is to let it do it itself, via its auto setting. Oddly, I haven't been able to find a way to easily adjust the balance between the two rear speakers which are slightly offset due to where the furniture is in my living room. There's no setting for that in Samsung's SmartThings app and when I tried to do it using the soundbar's own (not solar powered) remote, I just got confused and gave up. Don't get me wrong - it still sounds incredible, I was just fiddling.

Perhaps the best thing about the 2021 Neo QLED experience is there's no fine-tuning required. Both the adaptive picture and sound settings do an excellent job of providing you with an out-of-this-world, immersive viewing experience that's almost impossible to fault.