I may have told you this story before but I'm getting old and you're supposed to humour old people when they do endearing things like repeat long, rambling stories.

My first stereo was a cast-off, handed down to me from my older brother. This was back in the days when home hi-fi systems were made of glass and metal, the speakers were made of wood and were as big as beer crates. Sometimes, you'd put them on beer crates if, like me, you couldn't afford stands.

The system was a system because it was made up of different, separate components; amp, tuner, cassette deck and of course, the turntable.

That's right, kids. I'm so old, when I got my first stereo, not even CD's had been invented yet.

(Well, they'd been invented - but the only time I'd actually seen one was when I visited my cousin who must have had a very high-paying part-time job. I still remember watching, fascinated, as he inserted a Pink Floyd CD into his bizarrely small midi-system - vertically - and you could actually see it spinning around through a little glass door. "It'll never catch on," I thought to myself.)

Slowly but surely, saving up pocket money and the pay from my stand-in paper round (I delivered the Waikato Times when the usual guy was away) I built up my LP collection... "Purple Rain" by Prince and the Revolution. Billy Joel, live in Russia. Crowded House's "Temple of Low Men" on picture disc. I remember them so clearly, even after all these years.

Today, I don't even have a stereo. Not really. I have wireless smart speakers all round my house. I have a surround-sound system for my TV made up of a soundbar and a couple of bookshelf speakers. I have bluetooth headphones and true-wireless earbuds.

But nothing to plug a turntable into. Which is just as well. Because I got rid of my records decades ago. I don't even have a CD player anymore.

But now vinyl is back with a vengeance. What to do?... 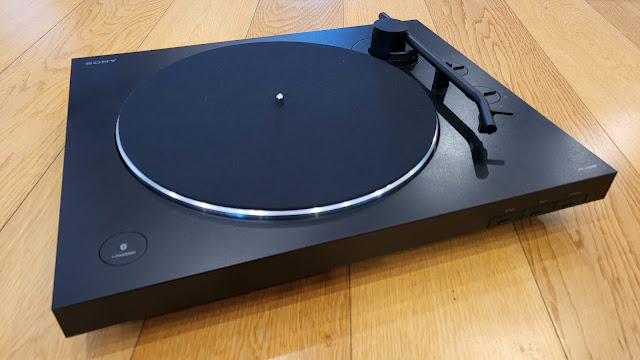 The LX-310 turntable from Sony transported me right back to my teenage years, the moment I pulled it out of the box. There's a solidity to it - it's kind of heavy, the platter is aluminium, the buttons are pleasingly clunky and chunky - the lid is removable and tinted - which seems very 80's somehow. 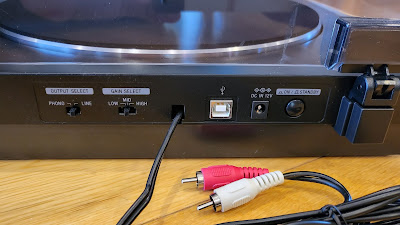 It really does look and feel so much like my old turntable from yesteryear.

And yes, it comes with a built-in phono stage - a stereo RCA cable snaking from the rear to plug into that multi-component hi-fi system I definitely do not have anymore. 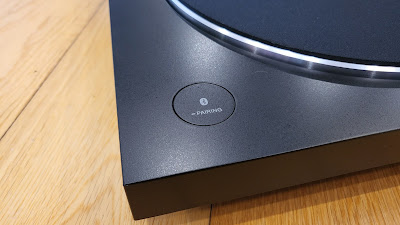 Luckily, the LX-310 is also bluetooth compatible, like just about every speaker in every room in my house. Setup takes just a few minutes - the most complicated step is removing all the bits from the box. The drive belt is conveniently taped up with a removable tab to make it simple to fit onto its bearing. From that point, it's just a matter of sliding the hinges of the lid into place (assuming you want to use the lid), plugging it in and pushing the pairing button.

This will connect it to any speaker or headset that's also in pairing mode - and you can pair with up to eight different devices, which offers quite a bit of versatility. 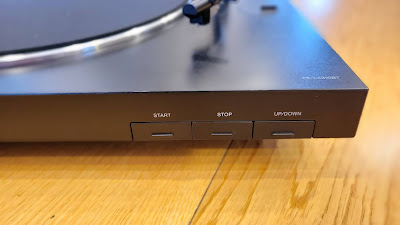 I first tried the LX-310 in combination with my Harman/Kardon Onyx Studio - one of the more powerful and best-sounding portable bluetooth speakers I own. In order to do this, I had to borrow some records off my daughter. Luckily for me, one of those records was "Mellow Mood" by jazz pianist, Oscar Peterson. Everything about the LX-310 is easy - the controls for Size and Speed are large and accessible and once you've set them, there are automatic Start and Stop buttons on the front of the deck, so you don't even have to place the needle yourself. 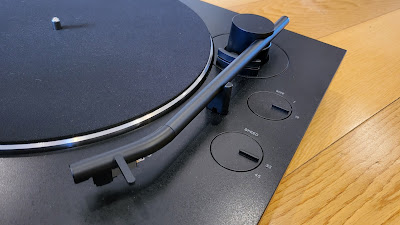 You can if you want, for old time's sake but when you're as much of a klutz as I am, why would you risk it?

Peterson's flowing, cascading style rang out powerfully and clearly. This was fun. And to be honest, a little surprising. Hi-fi snobs are always prattling on about the superior sound quality of vinyl, the argument being the modern practices of digital recording, sound compression and online streaming have squashed all the life out of today's music and the only way to really hear it as it was played live is via a needle in a groove. This argument has its technical merits, although the recent emergence of a variety of high-res streaming services is starting to take the wind out of its sails somewhat. However, it can't be denied the bluetooth technology used to connect most devices involves compressing the sound from the source, then reconstituting it digitally at the other end. So in theory, connecting a turntable to a speaker this way completely negates any advantage you gained by playing a record in the first place.

I dunno... there's definitely something magic going on here.

Next I connected to an Echo Show - primarily because I just thought it would be really funny to be able to turn the music up and down, on and off using Alexa. It was. Still sounded really good though.

This morning, as I write this, I'm listening to my daughter's copy of "Frank" by Amy Winehouse on a set of pretty decent bluetooth headphones. This means I can hear every crackle, pop and hiss as though it's all happening inside my head... and I love it. 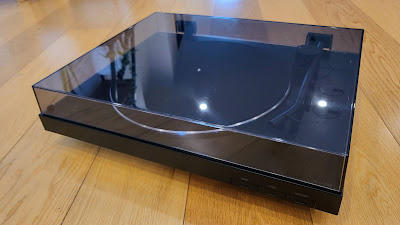 I don't know if there really is something magical about this analogue/digital colab Sony has put together here, or if it's just the nostalgia of sliding LP's out of their sleeves, holding them by their edges and having to get up and flip them over to listen to the other side.

Whatever it is, I haven't felt a burning desire to find something to plug that RCA cable into - not when the bluetooth scenario is just so damn convenient. In fact, the only design flaw as far as I can tell is I can't remove that cable. Seriously, I simply have no use for it.

Click here for more information and pricing on the Sony LX-310 bluetooth turntable.