Some gadgets are important. Useful. Necessary, even. Maybe there was a desperate need. A gap in the market.

Someone needed something. Someone invented it. Someone got in the middle and sold it.

Then there are things you just want. You see it and although you never even knew it existed, now you just have to have it. 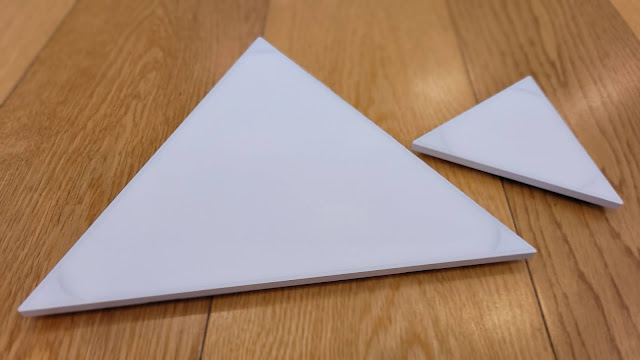 Now, there's a couple of things you might be thinking right away that might be wrong. Firstly, "Haven't you reviewed Nanoleaf Triangles before?" Secondly, "They look boring."

Yes, I have indeed had a go with an earlier version of this product but things have come a long way since then. And no, they are not boring because these are not just static, white bits of plastic, they are of course part of the new Shapes range of smart LED lighting panels.

Oh, thirdly... if you were thinking, "Hey, don't these just do the same thing as those Hexagons you reviewed a while back?" then this time you're actually right. But the exciting thing is you can use the Triangles, Mini Triangles and Hexagons all together. 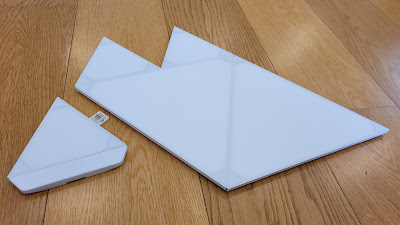 So just to recap; Nanoleaf Shapes are modular lighting panels that are easily connected using Linkers - electronic clasps that allow you to create any geometric design you fancy - and I do man any. Use as many or as few shapes as you like - there are even Flex Linkers so you can extend your Shapes around corners. A single controller unit (included with each "Smarter" kit) can run up to five-hundred panels, so you can cover a fair amount of wall space (or even the ceiling I suppose).

When you've decided on your final design, you can connect it to your WiFi network using the Nanoleaf app for either Android or iOS. Everything is very well designed, very well thought through and very user friendly. There are three ways to pair, via QR, NFC or manual entry of a unique code - each step guided by the app. You can even browse configuration suggestions if you're feeling a little stumped, creatively. 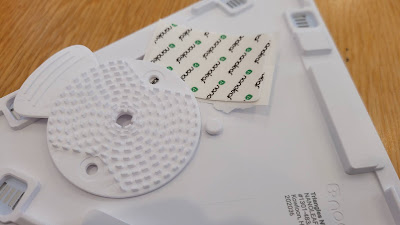 Once your shapes are up and running and you're generally happy with the layout, it's time to hang them up using the redesigned mounting plates attached to each panel. These can be stuck to the wall using the included mounting tape or if you're really happy with how things look, you can screw them in permanently. Although you probably won't know exactly how happy you are with your shapes until you've given all the options a try.

I don't mean all sixteen-million possible colours, that would take quite some time. But there's a whole world of preset colour scenes to choose from - static, changing, responding to music - all fully customisable via the app. The panels will also respond to touches, taps and swipes, again these can be set up to your preference.

But we knew all this. Well, we did if you read my Hexagons review. What I didn't know is there's now a downloadable desktop app too. This gives you access to any of your connected Shapes arrays with the same functionality as the phone app and it offers an amazing new feature; Screen Mirroring.

Somehow Nanoleaf has figured out how to replicate the colours you're seeing on your PC or laptop screen to display them on your shapes. This means if you're streaming from your computer to your TV, Shapes can be mounted behind your telly to highlight the action on screen. Even more exciting, you can create the ultimate gaming environment by mounting shapes around your PC monitor. The crazy thing is, although these are Hexagons and Triangles, they duplicate your on-screen colour palette instantly - it works incredibly well.

I imagine there'd be many other useful applications for this mirroring ability - not least of which might be accentuating display screens in reception areas or retail spaces. 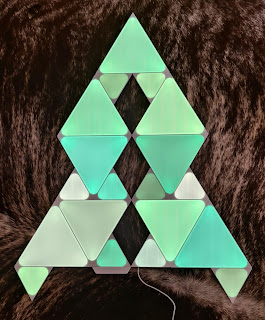 Personally, when I heard the word, "Triangles," obviously I immediately thought, "Christmas tree." I mean, what is a Christmas tree if not just a bunch of triangles on top of each other, right? So I got planning permission from the Domestic Manager to assemble an illuminated tree for our entranceway just in time for the festive season - this was my first attempt...

It received a lukewarm response, to say the least.

I was informed it looked more like a spaceship than a tree. Luckily, Shapes are easily taken apart and reassembled - even while turned on - that's part of the fun of it.

So I gave it another go and here's the result. 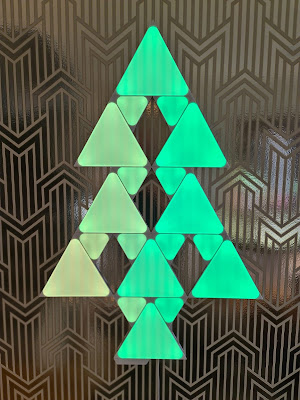 This got the final signoff and it's now up on the wall. I'm using the "Jungle" profile, which cycles various shades of green across all the panels but there are any number of options I could go with instead - including colour schemes created and shared by other Nanoleaf users.

You can schedule Shapes to turn on, off or change colours and modes at whatever times you like and because they're Alexa, Google Assistant and HomeKit enabled, you can control Shapes with your voice or automate them with other IoT devices. For example, my entranceway Christmas tree is set up to turn on as soon as anyone rings the doorbell.

I still wish the panels lit up all the way to the points instead of rounding off all the corners - maybe whichever Shape comes next will do that - but as smart lights go, you'd be hard-pushed to find any smarter than these Triangles, Mini Triangles and Hexagons.