There are two types of people in the world; those who can solve The Cube and those who can get one side if they spend a very long time on it, then get fed up, throw it across the room and never pick it up ever again.

I'm in that latter group.

Actually, to be perfectly honest, I vaguely remember doing two sides on occasion, which definitely would have been a total fluke. And for some reason, there was a Crunchie Bar promotion once that involved sending away for a specially printed cube with pictures from the Cruchie Bar ad on each side. Given I couldn't do the normal cube, I have no idea why I thought I'd be able to solve one made exponentially more difficult by the fact you had to have each panel in exactly the right place - not just the right colour.

Or did I have that wrong from the start? Was that my big mistake?... 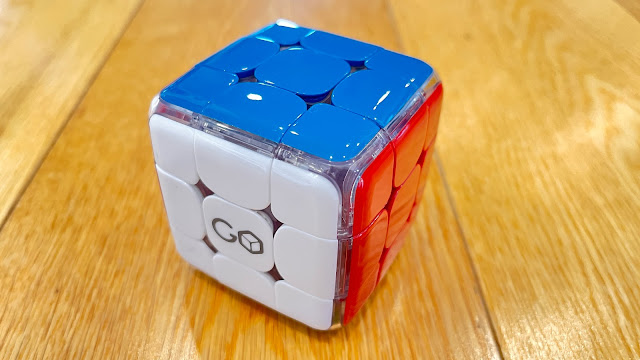 So when the makers of the GoCube claimed I could, "Learn to solve the cube in a fun and interactive way (in 1 hour!)." I have to admit, I was pretty intgrigued.

The GoCube is pretty much exactly what you want it to be; a Rubik's Cube that connects wirelessly to your smartphone so the GoCube app can show you how to solve it. In theory. 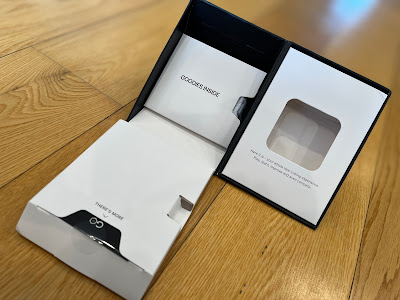 I was sent the GoCube Edge full pack for review. This includes charging cable, display stand - which the charging cable can fit into, a plush carry pouch festooned with the GoCube logo and of course, the smart-cube itself. Even the box it comes in unfolds like a puzzle, with witty little prompts indicating where all the bits and pieces are.

I was immediately impressed with how well manufactured the GoCube is. Due to my complete lack of ability, I've never used a "speed cube" before - the modified construction allows competitive cubers to manipulate the device at a lightning pace - the second you pick it up it almost takes off on its own accord, seemingly begging to be solved.

Pairing only takes mere moments, although you'll need to create your own GoCube profile in the process. If you choose, you can add your photo, although for some reason when I took mine it appeared upside-down. Every time. Not sure if this is a bug in the app or some kind of cubing joke. Anyway... 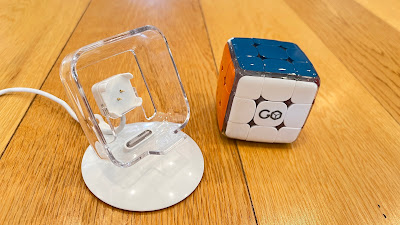 From that point, you'll see how much charge is left in your GoCube at the top of the screen - and this seems to last for ages, by the way. There's a light in the middle of the device which you can choose to leave on the whole time or just save for showing off your success in the various tutorials, games and challenges available within the app. This light also pulses on and off when you put the GoCube on to charge - it's pretty bright, so you won't be wanting to do that on your bedside table overnight.

It's hard not to be blown away by how well the app and the GoCube work together. Whether you're training, solving or competing, you'll see a real-time reprensentation of your cube in its current state - instantly responding to every move you make, right or wrong.

Admittedly, things do get a bit out of alignment after a while but this is no biggie as there's one-touch recalibration button in the top right corner to get things all lined up again. Cleverly, the charging stand also acts as a phone stand, making it easier to watch the app and cube simultaneously.

Given I'm a self-confessed know-nothing-bozo, my first stop once I had everything up and running was the "Academy" - the tutorial section of the app that teaches you everything you ever needed to know about solving the cube, step by step, section by section. This means learning the shorthand instructions for manipulating the GoCube, then eventually full algorithms ("algos") or longer sequences of moves that are commonly used to achieve a successful solution. 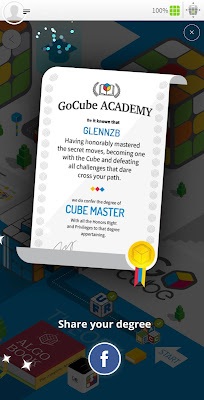 In about half an hour, I'd passed every step in the Academy, even earning a virtual diploma. Only trouble is, just like back at school, none of it stuck. I remembered the instructions. I even remembered a few of the algorithms. Did I remember how I was supposed to use any of those to do the cube? Nope. Not at all.

So I went back to the beginning and did the Academy all over again. It didn't make any difference. I'm a lost cubing cause, apparently. There's even a practice room, where you are shown a progression of examples to guide you along, accompanied by helpful video tips to jog your memory.

I guess some memories are unjoggable.

Luckily, there's a "Solver" option that walks you through, move by move, getting all the pieces back in the right place bewilderingly quickly.

What's more, there's plenty else to do other than just solve the thing.

There's a whole section of games designed to improve your handling of the GoCube - a Simon-like memory game, a music game where you can play tunes by moving the cube in different ways (the sound comes out of your phone of course, not the cube) even a maze game involving a virtual ball rolling around the outside of your GoCube. These are all fabulous time wasters and I'd argue worth the price of the device all by themselves.

However, if you're unlike me and you actually have a brain, you either already know how to do the cube, or the easy training steps of the Academy have got you up to speed. Then it's time to get competitive.

Not only can you try to beat your own times for both solving and scrambling the GoCube but you can challenge a friend or even participate in the RedBull Rubik's World Cup, taking on other GoCubers from around the globe.

I looked at the leaderboard. How can someone do in five seconds what I can't do at all? AT ALL!!!

I'm determined to get there and I know with enough practice, especially the guided practice offered by the GoCube app, eventually my tired old synapses must make a connection or two and I'll finally retain the knowledge I need to make this thing work.

Not a bad way to kill a few hours in lockdown and a pretty cool stocking-filler for young and old this Christmas.

Click here for more information and pricing on the GoCube.