I think these were probably the first buds I'd tried to feature Active Noise Cancelling technology and being Sony's ANC, it set a pretty impressive benchmark few have managed to match since. Sony has been pushing hard to set the standard when it comes to ANC, with both its over-ear and in-ear headsets. Not to mention the brand has already established itself as a senior player when it comes to overall headphone sound quality - after all, who was really using earbuds to listen to music before the Walkman came along. What's a Walkman?... Shut up, kid.

Unfortunately, with the WF-1000XM3, I felt Sony had put so much effort into making the experience sound great and above all else, noise-free, they'd forgotten about some of the other stuff... like appearance, fit and durability.

In fact, for many consumers, how their wireless buds look, feel or last is even more important than how they sound.

So after setting the standard for ANC, it was time for Sony to lift its game... 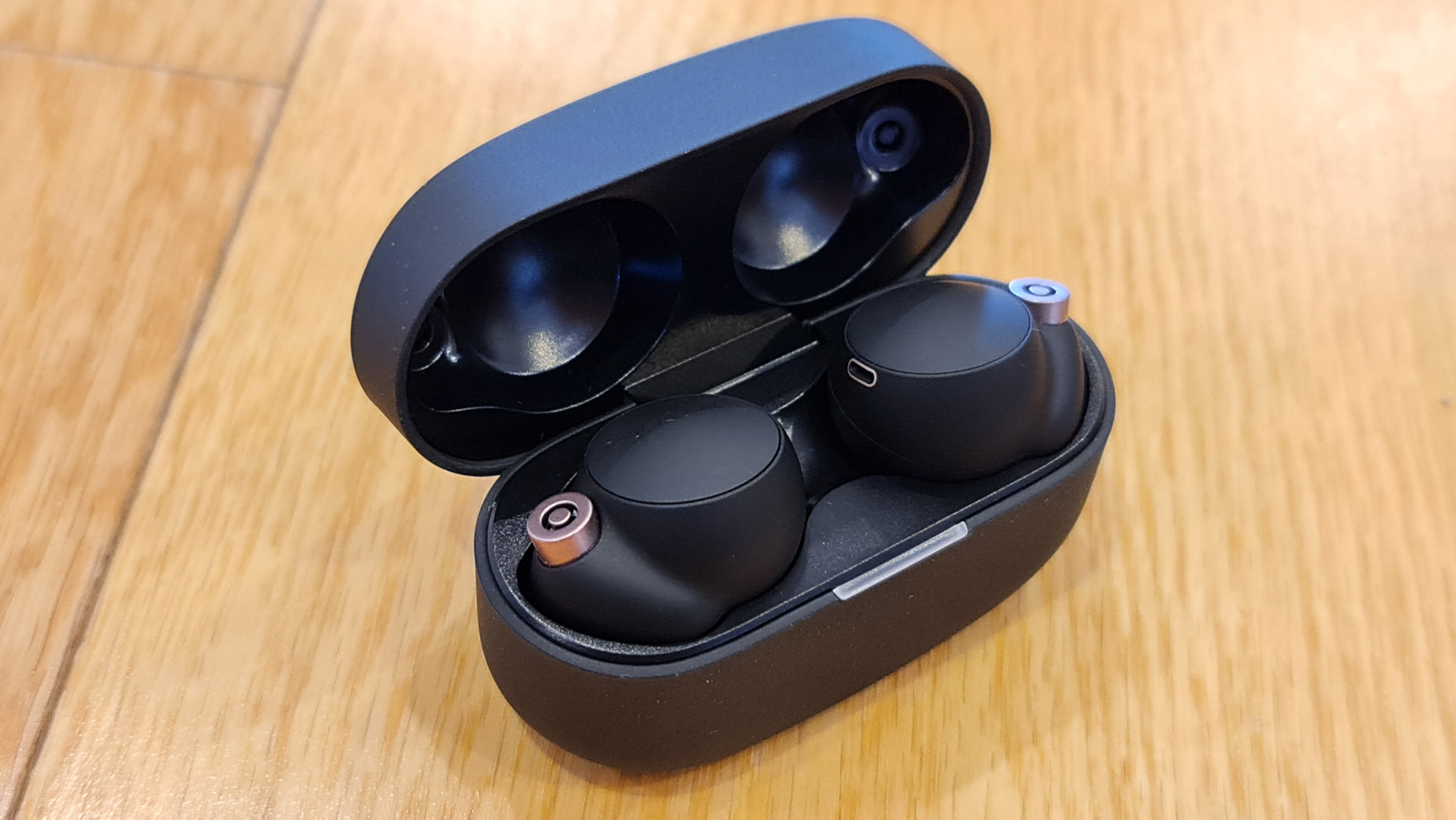 Right off the bat, it's easy to see Sony went right back to the drawing board with the WF-1000XM4 buds.

For a start, they're buds - not weird, surfboard-shaped tabs like their predecessors. While balancing the previous, oblong models in your earholes left plenty of space for the Sony logo, it just felt plain odd.

Also, because there was no IP or IPX rating, wearing them out in any kind of weather or while exercising risked water damage which is not really what you want from a pricey piece of kit like this.

In fact, if asked I would have actively discouraged anyone from purchasing the older model if they were planning on using them while running or at the gym.

That's all changed now - and I do mean all.

The WF-1000XM4's carry an IPX4 water resistance rating, so you no longer have to worry about splashes or rain or sweating them to death. Today I actually went running in the rain to test this. Unpleasant, but there's nothing I wouldn't do for you. Most importantly, the new form-factor is much more conventional, meaning the fit is much more secure - not to mention way less crazy-looking.

With a caveat... you have to know how to wear them. That may sound strange but it wasn't until I read about one crucial step in another review I realised I'd been using the WF-1000XM4's all wrong - so listen up, this is an important Public Service Announcement;

When I used to work on my dad's apple orchard, I used to operate a lot of very loud, heavy machinery. This meant wearing ear plugs to protect my hearing. For those of you who haven't tried them before, earplugs like that are made of a special kind of plasticky-foam material that you roll between your fingers to make them narrow enough to insert into your ears. Then you hold them there for a few seconds while they return to their original shape, thereby creating a virtually airtight seal against the noise. 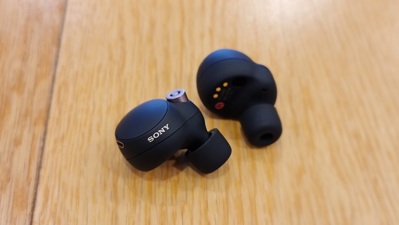 Unbeknownst to me, the tips on the WF-1000XM4's work the same way. Before inserting them, you need to squash them a bit so you can get them in properly, then hold them in place for a moment while the tips expand again. Normally, I use the medium-sized tips most earbuds come fitted with straight out of the box but in this case, because I didn't know about the squashy-insert technique, the mediums were a fail and I went with the small tips instead. This was comfortable but not that secure. Because, as it turns out, they were the wrong size.

You see? I'm a medium after all.

Once I had the buds fitted properly, it was a whole new ballgame. There's no point offering the world's best ANC if your Passive Noise Cancelling is rubbish, due to a loose fit. Now what I can assure you is Sony's new Integrated Processor V1 does a simply incredible job of running the noise reduction, once again setting the standard for other manufacturers to follow.

This doesn't just mean cutting out all the noise all the time - although you can do that if you want. After pairing the WF-1000XM4's with your device, either manually through your bluetooth settings or via the automatic pop-up window on late model Android phones running the latest OS, you can then use the Sony Headphones Connect app to access a raft of settings and customisations. The WF-1000XM4 is one of the few earphones that can intelligently monitor your surroundings to alter the level of noise cancellation accordingly - these buds can even learn your locations and automatically adjust that way.

Personally, I prefer total noise cancelling all the time, so I've deactivated the auto sensing - there's also a voice detection option just like on Sony's over-ear models. This lets in ambient sound when you start speaking so you can have a conversation without removing the earbuds. People in offices find this sort of thing useful. I'm not a person in an office. 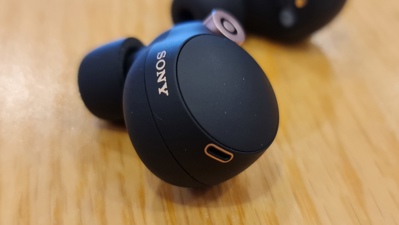 One feature I haven't turned off is Automatic Wind Reduction - this is because without it, I've found the WF-1000XM4's are particularly prone to catching the wind, possibly due to those small, bronze highlighted mic cavities you can see in the images. These protrude in a way I'm sure helps pick up your voice clearly on phone calls but as I say, if there's a breeze, you'll know about it. Just as well Sony's figured out a way to block that noise out.

The Headphones Connect app also lets you do things like choose your voice assistant, change your EQ settings and test the fit (just in case you haven't got the squish-and-insert thing right yet). If you subscribe to a streaming service that supports 360 Reality Audio, the app will even guide you through a setup process that actually takes pictures of your ears to optimise the results.

What I like is how you can customise the touch controls on each earbud - I'm using the left one for volume and the right for playback - but you can choose to toggle noise reduction or turn off the controls completely if you prefer. You can access your voice assistant too but only Amazon Alexa or Google Assistant - Siri doesn't seem to be supported.

If the sound quality on the previous model was standout, needless to say, it hasn't got any worse two years later. Thanks to the sealed fit, bass response is even better than ever. When listening to "It Hurts!" by San Holo, its weird electro bass track almost makes it sound like you're inside the speaker - weird in a good way. There's also a convincing sense of space - even without 360 Reality Audio. "Jeff Beck's Guitar Shop" is a fun instrumental jump back in time, packed with fantastic technical production, lots of stereo effects and some truly wild guitar licks. I turned it up real loud and blew my brains out. Good times. 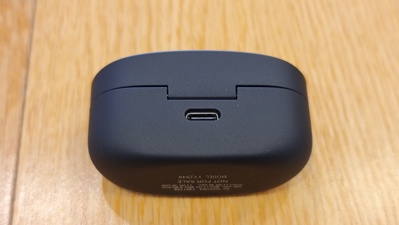 Battery life is another first class feature here - up to eight hours from the buds themselves and two more full charges in the case. I consider anything around that 24-hour level to be excellent - especially given the relatively small size of the buds and the dramatically smaller charging case. The previous model was bordering on ridiculous - and ugly. This year's is about as compact as it can be and is easily pocketable. It supports fast charging and will also charge wirelessly. There's an LED display that changes colour to show you when charge is getting low and usefully, you can see exact percentages of battery levels on the app - for each bud and the case.

With the WF-1000XM4, there's no doubt Sony has ironed out the imperfections of the WF-1000XM3. These are now a good option for exercise, thanks to their vastly improved fit, more compact form factor and improved water resistance. The app, noise reduction and customisations are more comprehensive than ever and the charging case has also evolved out of sight. At a rather steep RRP of NZD$499.95, this has simply got to be a premium product and yes, I think Sony has delivered the goods, albeit in a somewhat underwhelming, recycled cardboard (but oh so sustainable) package. Once again, they've set the standard for the others to live up to. Just don't forget to squish.