The question is, why isn't your Wi-Fi working as well as it used to?

Back when you signed up with your ISP, they sent you a new router which seemed to do the job at the time. Depending on your plan and provider, they may have even thrown in some mesh extenders to ensure your home network definitely blanketed your whole house.

But a few years on, it seems like things aren't quite so reliable anymore.

The gamers in the house noticed the issues first, complaining of "lag". Nothing worse than being stabbed by some kind of sabre-wielding alien because you couldn't get your melee going in time.

Next, the Work-From-Homers start looking blurry on their video calls or even worse, their VPN connection to the office drops in and out, making it virtually impossible to access the shared files they need.

Worst case scenario, everybody's trying to stream their favourite show all at once and only some are playing without buffering. Nightmare.

What happened? Well.. all that stuff happened. Your congested Wi-Fi isn't likely to magically get less crowded, quite the opposite. What's worse is your neighbours are all suffering the same issues - no wonder your IoT cameras and sensors keep dropping out too.

Sounds like your Wi-Fi is no longer smart enough. Time for an AI upgrade. 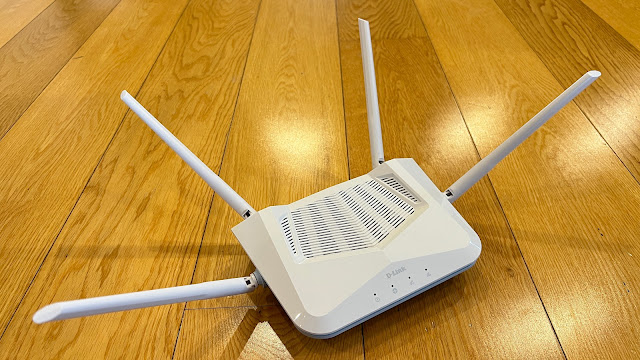 When D-Link introduced its new range of EAGLE PRO AI home networking devices, it promised not just a move to Wi-Fi 6 but a machine-learning system that analyses the available bandwidth, the demands of connected devices and allocates the space accordingly.

Unfortunately, I stumbled across the EAGLE PRO range sort of the wrong way around - starting with the M15 mesh extenders. While it's possible to use these as a standalone network, setting up one as primary router, in my testing the result wasn't as reliable as I was expecting; too many devices connected still seemed to result in dropouts, even between the M15 extenders themselves.

Next I tried the EAGLE PRO AI G415 - the 4G router capable of supplying wireless internet to a whole house. This was more like it. I was very impressed with how full-featured the G415 is - dual external antennae to ensure decent coverage, multiple ethernet ports to connect devices without Wi-Fi - in combination with those M15 extenders I was able to run my whole home network on 4G without any major issues at all. Fantastic.

Now the EAGLE PRO AI R15 completes the picture; a genuine AX1500 router designed to be the basis of your new, more intelligent Wi-Fi network. 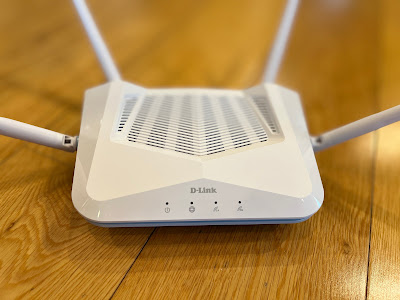 Like the other EAGLE PRO products, the R15 is a soft white colour with a pale blue base. This colour-scheme - combined with the fact the whole router is not actually particularly large - means it's certainly one of the more subtle Wi-Fi routers out there. There are still four adjustable external antennae but as they're white as well, so even if you mount the R15 on the wall they're probably not going to be too in-your-face.

As usual, setup is simple and efficient, through the EAGLE PRO AI app. It literally shows you which cables you need to plug in where and automatically configures your network settings based on the ISP you're connecting to.

The app also offers typical features like parental controls, (scheduling network access, restricting certain sites) prioritising connected devices and my absolute favourite; the ability to turn off the status LED's at the front of the router. Have I mentioned how much I hate little flashing lights? 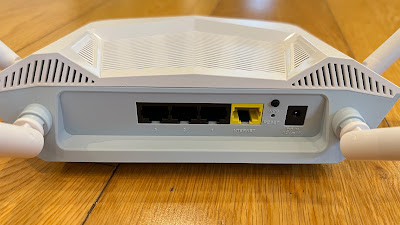 I was a bit surprised to find just three ethernet ports on the back of the device for LAN connection (not counting the internet-input port) - most D-Link routers I've used in the past have had at least four. I'm a fan or more connectivity options, not less but I guess it's not the end of the world.

Once the R15 was fired up and running, I was immediately impressed with its speed, power and coverage - while this is still not the all-conquering beast you might find at the more expensive end of D-Link's line of gaming-focussed routers, it still came very close to covering my whole large, two-storey home with useful amounts of Wi-Fi - almost.

What I've found particularly encouraging is how much more stable the connection seems to be with my IoT devices. I've found they tend to prefer the 2.4GHz band over the 5GHz one and somehow the R15 seems to be able to sort this out for them. If you feel the need, by clicking the "Advanced Settings" button in the app, you'll open the more traditional browser-based interface where you can really go to town tweaking things, like assigning different network names for the 2.4GHz and 5Ghz bands, to guarantee they stay separate.

Back on the EAGLE PRO app, you can test your speed and there are even weekly reports on your internet usage. Yeah, it's pretty smart.

As I mentioned, my house is probably just a bit big for this router to cover completely - especially including exterior devices like my doorbell and security cameras. That's where the M15 extenders come in. Pairing them with the R15 was a simple matter of pushing the WPS button on both devices. The range for a "good" connection between router and extender isn't as far as some other mesh accessories I've tried but it has certainly proved far enough to provide reliable, fast Wi-Fi everywhere it needs to be.

The really good news is the EAGLE PRO R15 is far from the most expensive router on the market. You're getting all that great, bi-directional, MU-MIMO, beamforming technology to ensure as many devices can perform at their maximum simultaneously, for not much more than NZ$200.00.

If your Wi-Fi is starting to feel a little stale, this could be the AI spruce-up you need.